We’ve had an injection of fresh blood. And the only team that can stop the good times from rolling now are Norrby.

The last 2 weeks have been completely different around the FC Höllviken camp. Our win over FC Trollhättan was perfectly timed, just before a break. We’ve had 2 weeks to regroup and train hard and the atmosphere has been electric. Not only did our win give everyone some much needed cheer and optimism, but I also took the break as a chance to bring in some trialists with a view to bolstering our squad for the last 3 games. I brought in 25 hopeful players, arranged U23 friendlies every few days so that they could dazzle us, and a few of them did just that.

Allow me to introduce you to our 4 new players: 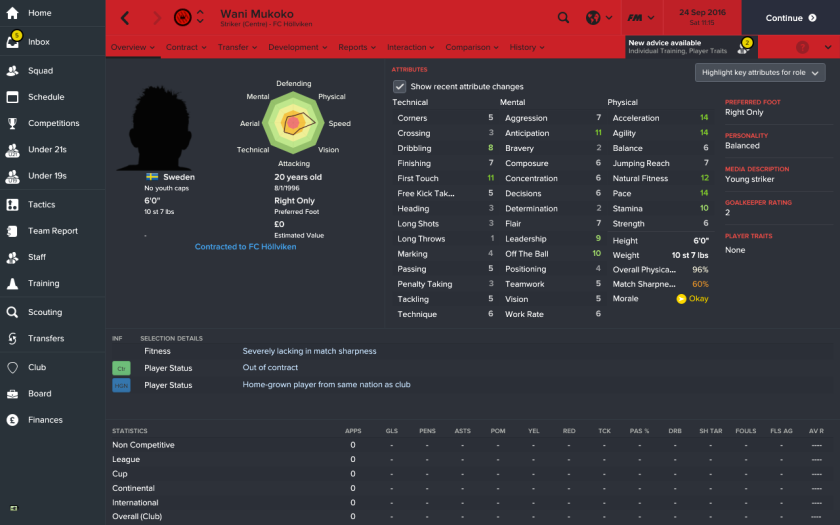 Wani Mukoko came in and gave a decent account of himself, bagging a goal and a couple of decent performances in a couple of friendlies. He may not have the best shot, but he’s quick and agile, with a decent touch and a good sense of where to be to have the optimal chance of scoring. He’ll provide decent and much needed back up to Andreas Persson.

Stefan Andersson is a 16 year old centre back who’s showing a lot of potential. He’s not a rounded player but he’s good enough in pretty much every essential area for a centre back. And if either of us get the chance to stick around beyond the next month I should be able to develop him into a good solid defender.

Every fibre in me fought against signing Lawrence, the short Ghanaian central midfielder. I think it’s because of his extremely questionable mental attributes, or possibly because of how easy it will be for opposition midfielders to bully him thanks to his small stature and fragile frame. But my God he gave some good performances in the 5 friendlies he played, so in he comes as our only non-Swedish player. Prove me wrong mate.

And last but by no means least is quite possibly the most promising of the lot. We have brought in Muhamed Dizdar, who I instantly dubbed “Mo Dizzle”. He protested but he’s already signed the bit of paper, so Mo Dizzle it is. He is an extremely rounded midfielder, a solid athlete, mature beyond his years at 22 years old, and who can resist the prospect of a couple of 30 yard screamers? His determination, teamwork and work rate are also particularly exciting to me as I value these attributes highly. I think Mo Dizzle could be the last piece of our first team puzzle.

In addition to arranging these trialists, the other 21 of whom are still with our under 23’s by the way and may still be brought in, I also arranged a senior team friendly against Mjällby AIF, who are comfortably 9th place in our division, to keep the first team squad’s fitness up. We lost 3-1 but that’s OK. I’d rather make sure we keep our focus and push ourselves than crush some poor, even punier side than us 6-0.

We’ve had a good break, played a practice match against good opposition and we’ve had an injection of fresh blood. And the only team that can stop the good times from rolling now are Norrby. They’re about as intimidating as a team that sound like they’re named after a cartoon dragon can be. They’re 3rd in the league and have racked up way more than twice our points tally for the season so far so my hopes are not high.

Another thing that could put an end to the party atmosphere is if Husqvana FF get 2 or more points from their last 3 games, as that would relegate us to the 4th tier with immediate effect. But we’ll cross that bridge when we come to it. Which we will, because one of those games is against us.

I name an unchanged side from the one that beat Trollhättan 2 weeks ago but with our new signings on the bench to make the difference if required, as they currently lack match sharpness. The Hammer is injured so he misses out entirely, but he should be back for the next match.

The game starts slowly and the first thing that happens of any note is Gashi wandering away from his “marker” Grannum to connect with a Petterson corner after 20 minutes. His header hits the back of the net, but for once I don’t feel aggrieved, I don’t feel angry and I don’t feel upset. Depressingly, this was always part of the plan. 5 minutes later Brandt shoots from 25 yards but it’s uncontrolled and flies high and wide.

At half time Grannum is still struggling. He’s a natural right winger who can also play as a centre back so I don’t begrudge him the odd poor performance. I bring on 16 year old Andersson to make his debut in Grannum’s place, hopefully that will sure us up in defence.

No. No it doesn’t. Less than 2 minutes after the restart (I’m becoming suspicious of how often I’m writing that exact phrase) Brandt finds Qoraj in acres of space on the left wing, and he drills in a low cross that deflects off big Simon Henningsson and past the helpless Cyrile in net.

The only chance of note we have is also the last mildly interesting thing that happens for either side, when with 33 minutes to go Sekiraca tries a pot shot on the turn from 25 yards and the ball almost trickles out for a throw. It doesn’t though so at least he’s spared that embarrassment. I concede that the better team has already won and throw on Mo Dizzle and Mukoko for their debuts, replacing Hoffman and Persson. Hoffman has been fine today and Persson hasn’t had much to do, but that’s not his fault. The rest of the match drags and it’s quite a relief when the final whistle goes.

In an unprecedented show of decency I smile, pat my players on the back, shake my opposite number’s hand and thank the officials before heading into the changing room to tell the lads not to worry. “This match was a distraction, nothing more”, I urge them. “The real matches are 2 weeks from today, and 2 weeks after that”.

It does worry me slightly that Husqvarna have picked up a point and if they pick up another we’ll effectively be relegated, however their last 2 matches are against Landskronal BoIS, who have already wrapped up the title and should actually destroy Husqvarna’s confidence quite nicely, and then us. They need to lose both games. We need to win both of ours.

The miracle we need isn’t out of our reach. Not yet.