I’ve been watching football being played in slow motion for the last few months. These players are fantastic. 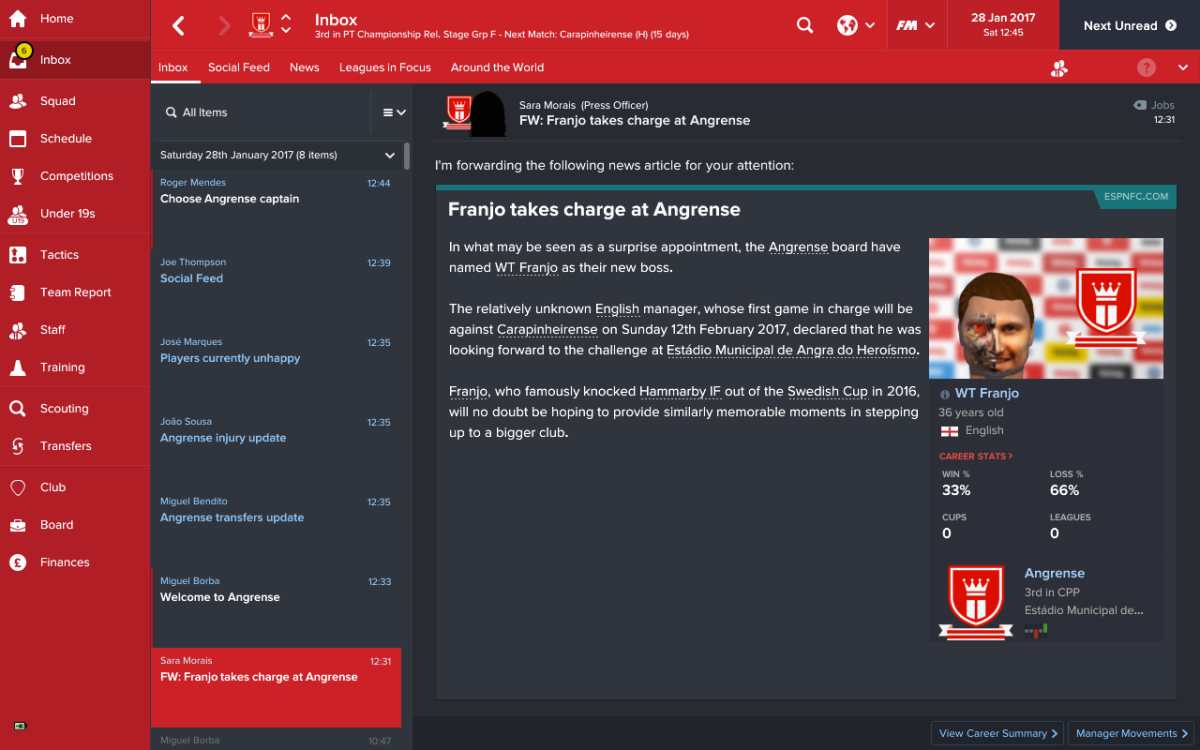 Start from the start with Episode 1

I feel like I’m being microwaved. I’ve moved from snowy Southern Sweden to Volcano Island, which is a molten stone’s throw away from the equator. The temperature difference is staggering. It’s so hot that my whole flat is spinning, which only adds weight to my microwave simile.

Nevertheless nothing will get me down today. I’m back in a job, and without wanting to sound bitter about my Höllviken experience, I feel like I’ve got a fair shot at this one. For starters I’ve got a squad. I’ve not met them yet, i’ve only seen a list of names, but I did note that there was more than 11 of them. For another thing I’m taking over a club that’s in a pretty good position and I get to handle every single Relegation Stage match.

Put simply, ain’t nothing gonna break my stride. It’s a new day here in Hero Creek and a chance to start over for everyone. I leave Meatloaf and Burnie sleeping at the foot of the bed and head out to meet the players and staff at Andrense’s training base.

I decide to walk there and the sun blazes against the back of my neck the entire way. Despite only living about a mile away I’m exhausted by the time I arrive. This is going to take some getting used to.

I make my way inside, find my way to the dressing room and push open the door. A roar of celebration greets me, and I stand in the doorway stunned for a second, looking around at 20-odd beaming faces. Some of them stand and come over to shake my hand or pat me on the back, others just cheer and applaud. I’m so confused.

One of them, a short, weathered looking gentleman, pushes a phone into my hands as he ruffles my hair. ESPNFC.com is loaded on the phone’s browser and the headline on the page reads “Franjo takes charge at Angrense”. The article seems to be all about how SC Angrense have bagged the mastermind behind a tiny Swedish Club’s triumph over a titanic top division club.

I laugh, both confused and relieved. This is who I am to Angrense. I’m not “Franjo: who took FC Höllviken down”, I’m “Franjo: Giant Slayer”. I’m “Franjo: Hero of the Little Man, Vanquisher of Top Tier Bullies”. I’m not sure how much they know about the rest of my Höllviken stint but I’m certainly not going to bring it up.

We head out for the first training session under my regime. I’m joined by Miguel Borba, club Chairman, and Roger Mendes, my new assistant manager. Maybe I just miss Joakim but Roger doesn’t exactly scream “Brilliant Assistant”. He may be handy but I don’t think I’d trust him to help me make the big decisions. 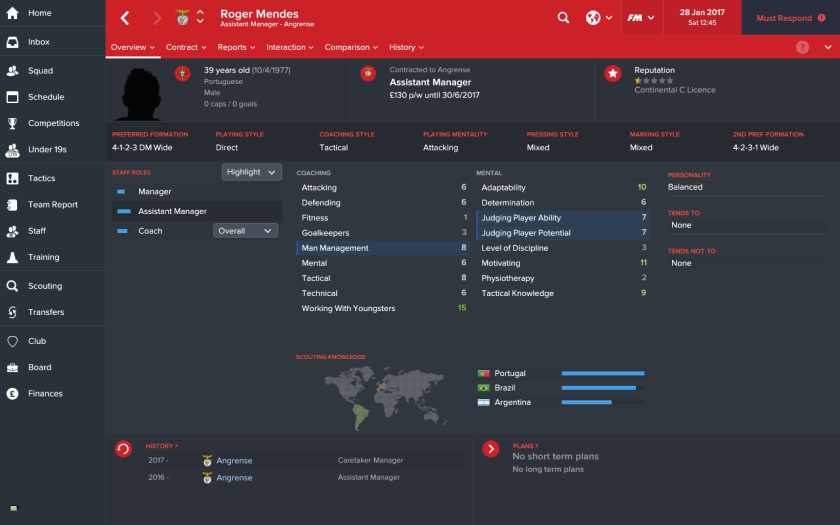 Training goes brilliantly. I feel like I’ve been watching football being played in slow motion for the last few months. These players are fantastic. I put together a preliminary plan for our first match against Carapinheirense on the 12th of February:

Délcio Azevedo looks like my best goalkeeper. At only 5’9″ he’s a little short for a stormtrooper but he has decent communication, handling, reflexes and there’s barely any quality that lets him down apart from perhaps his eccentricity. Also I suspect his name translates as “Delicious Avocado”, but I’m still waiting on confirmation. 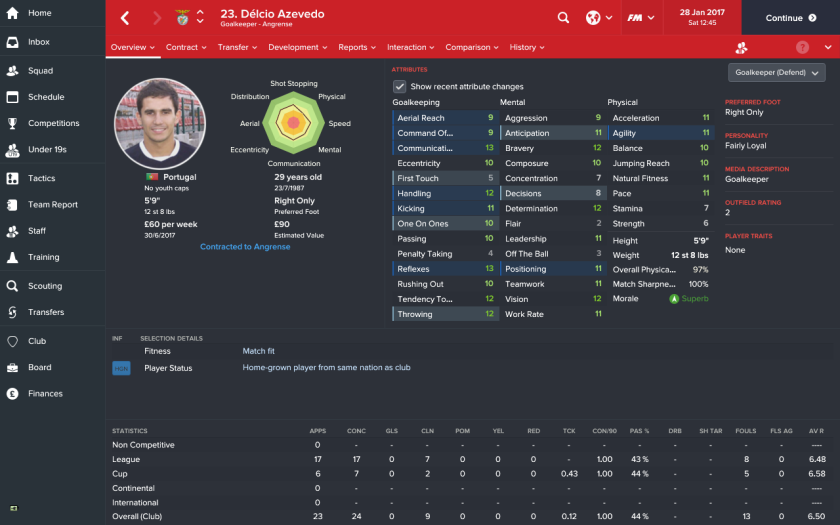 Vitor Miranda will be our defensive right back. He’s very well rounded (And you must know by now how much I love rounded players) and apart from being a little slow there aren’t any parts of his game that I’m worried about. 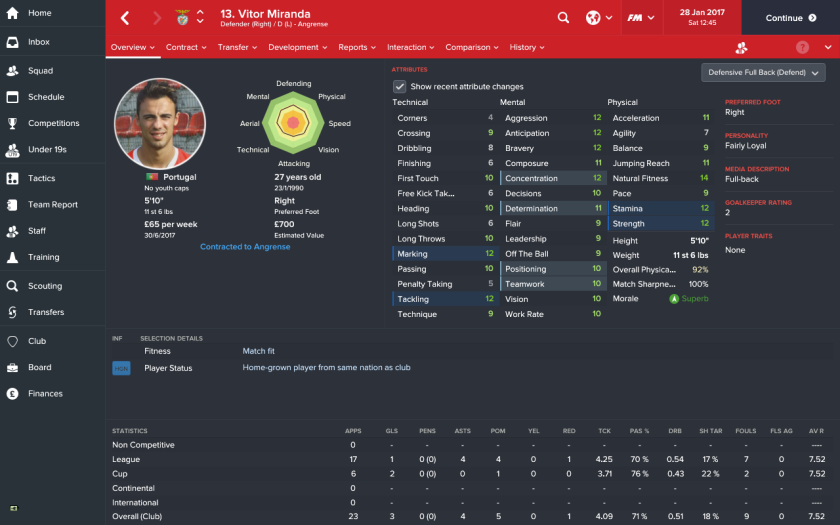 Miguel Oliveira looks like he’ll be a solid centre back with the added benefit that he looks quite comfortable on the ball. I’ll keep that in mind if I ever want us to play out from the back. 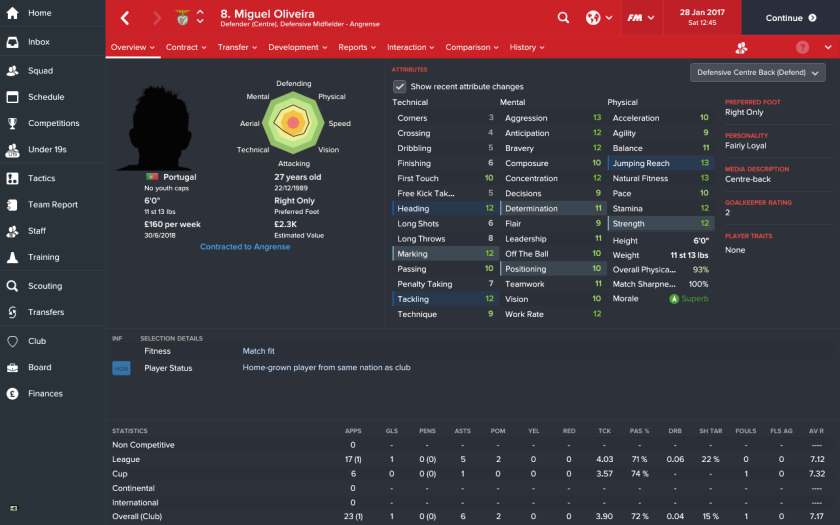 Ivan Santos is a very nice upgrade on Simon Henningsson. He’s a mountain of a man who’s not actually any slower than the rest of my defence, so that’s good. Again, he’s also fairly comfortable on the ball. 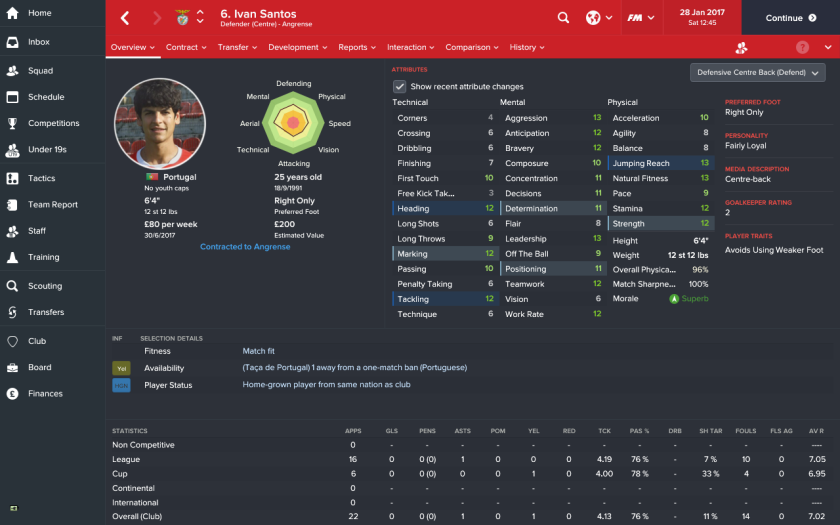 Oh Captain my Captain. Our skipper Gonçalo Valadão as it turns out is the short, weathered looking gentleman who handed me the phone when I arrived. In contrast to the rest of the players you’ve seen so far Valadão has an achilles heel: he’s pretty slow and not a great athlete. At 35 however I’m willing to look past that. I won’t be looking for fireworks, just for him to tidy up on the left hand side and lead by example with his mouth-watering mental attributes. He’s also right footed and a natural right back, but I have faith that he’ll do a job on the left. 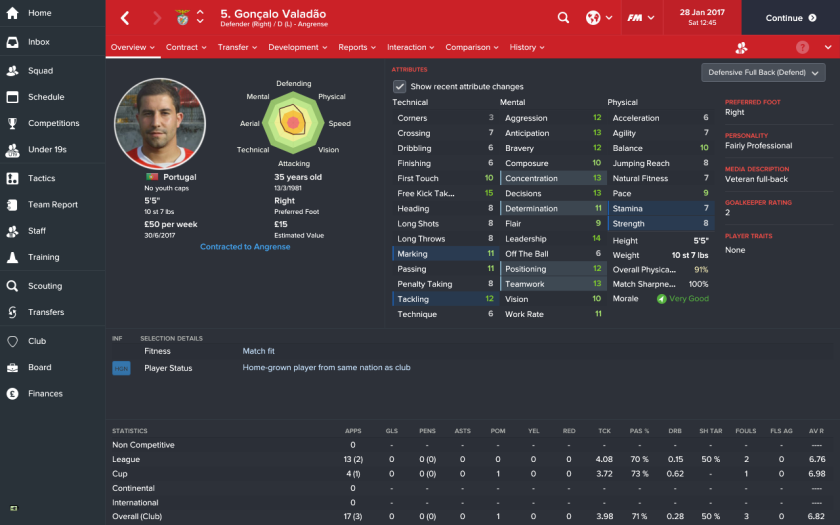 Jaime Seidi will be our holding man. It was a toss up between him and Oliveira, but as the more technically gifted of the pair he gets the nod. He does look excellent. Determination, Team Work and Work Rate are the first things I look at and he’s got no problems in that area. Or any area really. 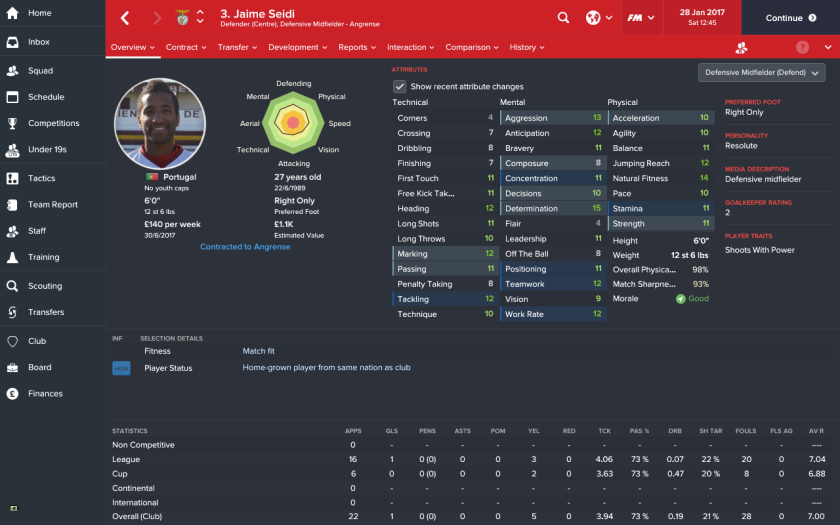 Next to him will be Benjamim, who I think would have a good shot at winning the “Most Average Player in the World” award. And I mean that in a good way, look at all those 10’s. He’s fairly physically imposing and will be on box to box duty because of his unbelievable roundedness. 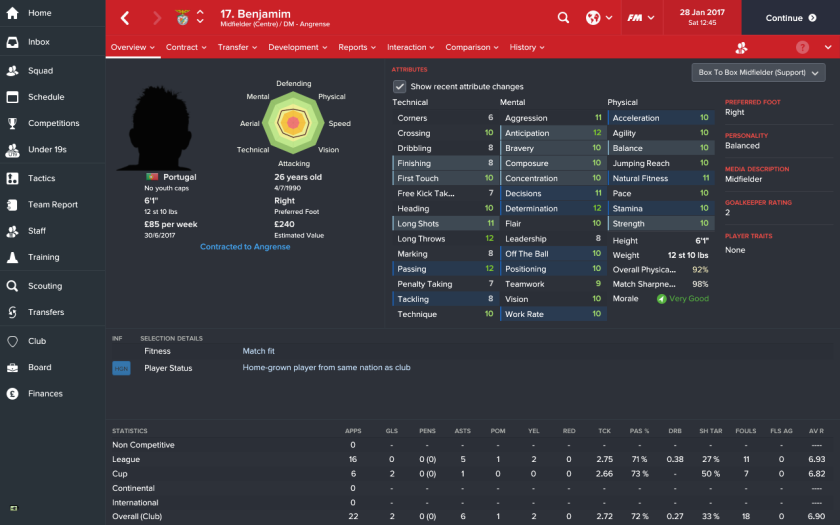 Marco Aurélio looks like a good player on the right wing. Chances are he’ll swap between the right and left because he’d do a decent job cutting in on his right and having a shot as well as being an out and out winger. 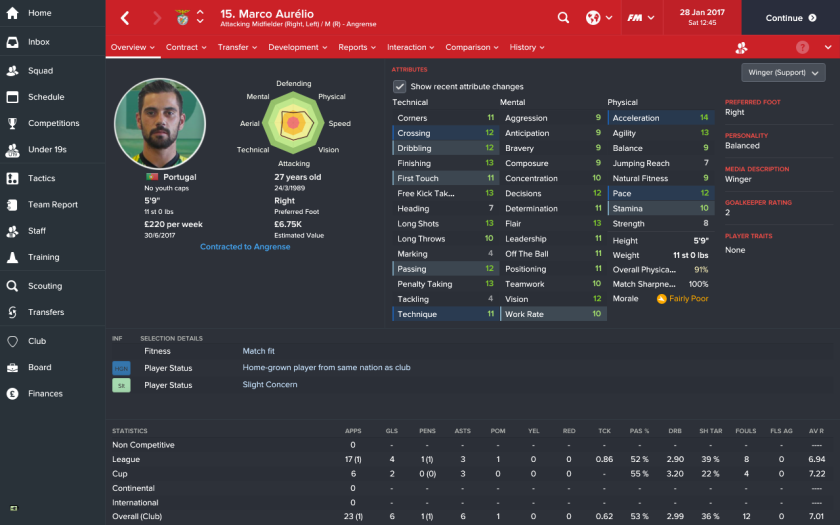 Jordanes Medeiros is a skilful player. He’s OK mentally and physically but technically he’s one of our best. He’ll do a good job as an advanced playmaker, making things happen and carving out chances with his good dribbling and passing. He’s already agreed to join Waasland-Beveren at the end of the season which is a shame, but we’ve still got him for 5 months. 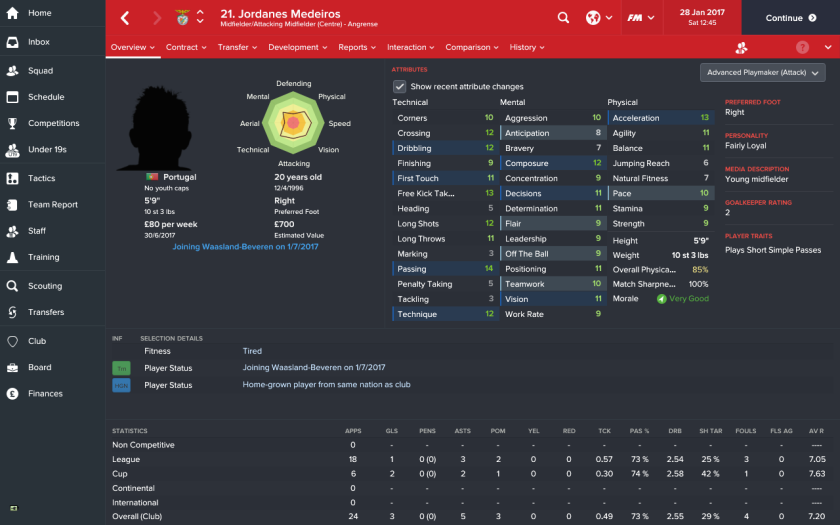 Pedro Aguiar is my vice captain. Like Aurélio he’s adept on the left and right and so will most likely be swapped between them, and what he lacks in pace he makes up for in his excellent mentals and his unexpectedly good aerial presence. He’s our very own Kevin Kilbane. In fact I’m calling him Kevin. 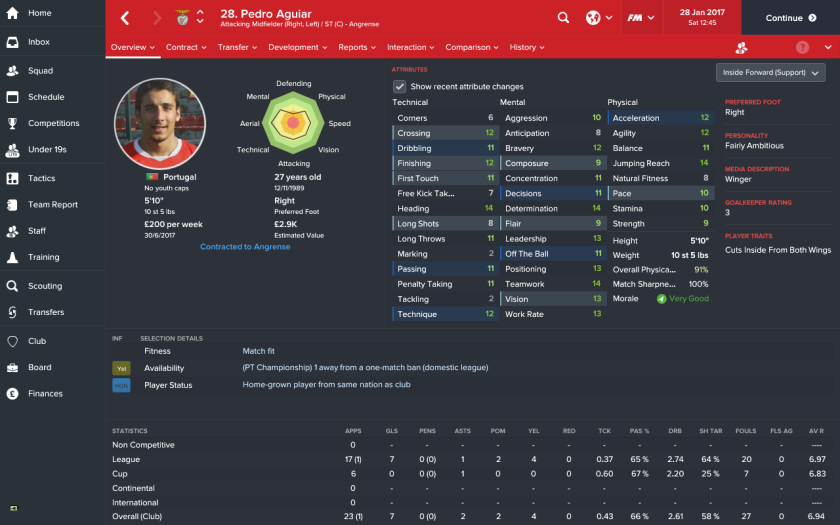 Finally in this preliminary lineup is Cristiano Magina, unsurprisingly the club’s top scorer this season. He’s a very very smart player, pretty solid physically and for what strikers need he’s good technically too. 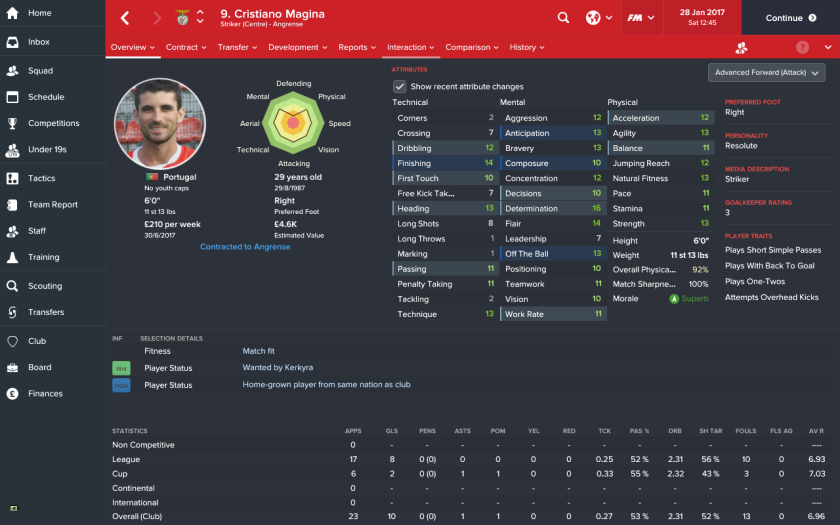 Our tactical plan will start out as a very simple and slightly asymmetrical 4-2-3-1 and we’ll tweak it as we go. 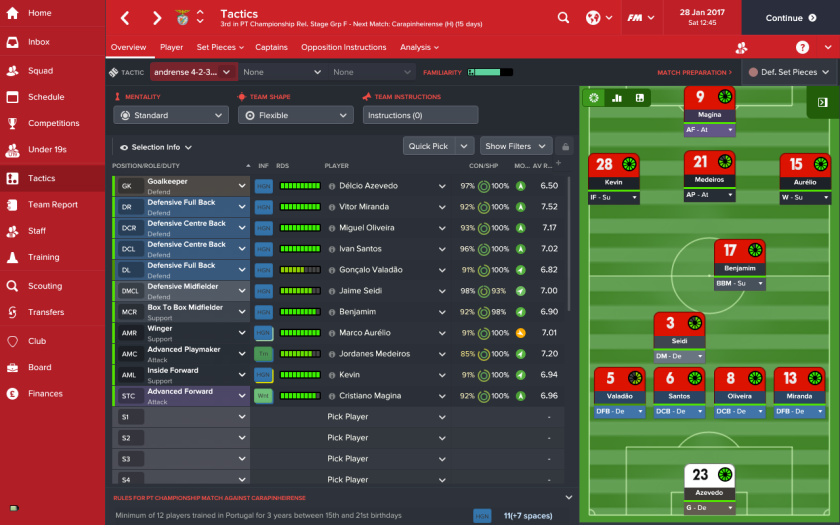 As pleased as I am with the squad, I do identify a couple of weaknesses. Valadão, our captain, should do a fine job at left back but he is still 35, right footed and first and foremost a right back, so I wouldn’t mind having a good natural left back to understudy.

Our goalkeeper Azevedo and central midfielder Benjamim are good, but not great. It would be nice to bring in replacements but they won’t be priorities. We could also do with a third striker to give us a bit of depth up there. The long-term priority will probably be finding a suitable replacement for the outgoing Medeiros. Lastly the team in general lacks a bit of pace, so that’s something to keep in mind when deciding who to sign.

With all that in mind, I get straight on the phone:

“Alex! It’s Franjo… Franjo… I was your… penalties… nevermind. I’d like to find out how attached you are to some of your players”.