Midweek games: A chance to build momentum? Or a surefire way to obliterate your team’s fitness? 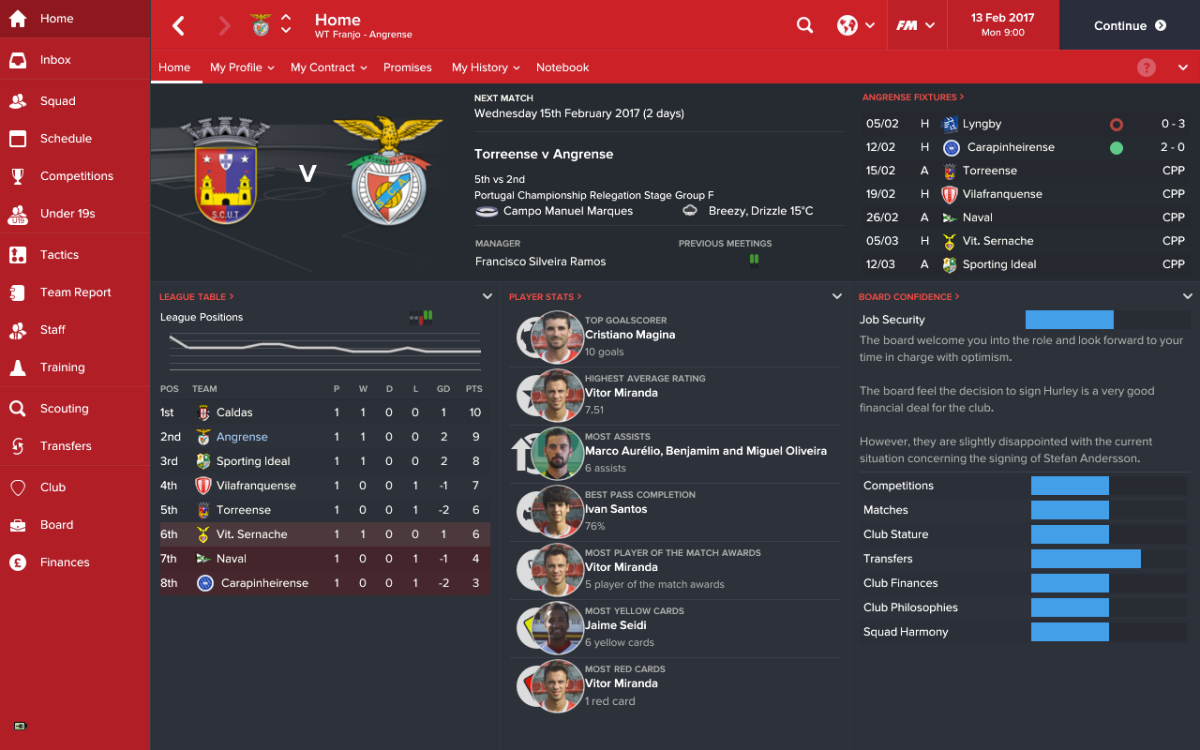 Midweek games: A chance to build momentum? Or a surefire way to obliterate your team’s fitness? I think largely it depends on your perspective, which is going to be determined by whether you win or lose. If you win, you’ll feel like any fatigue caused is negligible: a necessary byproduct on the road to victory. Whereas if you lose you’ll feel like the match was an unnecessary obstacle scheduled only to annoy you and destroy your squad.

So let’s find out what this match is to us shall we?

Tonight we travel to the municipality of Torres Vedras, just North of Lisbon, and Campos Manuel Marques, home of Torreense. They sit at 5th place in the PT Championship, having started on 6 points like us, but having lost 2-0 to Sporting Ideal in their first match. We’re 2nd on 9 points, however I am well aware that we started with a good points advantage and possibly the easiest game of our season, so we won’t be getting ahead of ourselves.

It occurs to me during the flight over to mainland Portugal that we may see a major discrepancy between our home and away form at this club. Whoever is travelling for our matches is in for a long, long journey over the Atlantic. I think we’d better do everything we can to make Estádio Municipal de Angra do Heroismo a fortress.

We stay pretty much unchanged from the first match, except that Magina is out (Mercifully only for a couple of days) so Arruda makes his full debut up front.

Nearly quarter of an hour into the match, Medeiros picks the ball up on the half way line, plays a one-two with Kevin just to his left, then dribbles forward and around a defender and shoots from the edge of the area, just putting the ball wide to the right. I’m torn on whether I should tell him and Magina (When fit) to stop being so ambitious with their shooting, or whether I should just leave them to it, it seems to be their natural game. It’s how they want to play. Watching those 2 is like watching a 16 year old Wayne Rooney, before the English public and media did what they do so well: Ruined him.

After half an hour with the match still deadlocked, I decide to make that decision properly another time. There is no Magina in the squad today so Medeiros can step in line. We will control play and we will work the ball into the box as a team.

Half time comes and goes without incident. In all honestly this isn’t a very exciting match.

7 minutes after the break, Vitor Miranda picks out Aurélio on the right wing, but Torreense’s left back Burguette slides in to knock the ball away. It bounces down the line for us though and Medeiros picks it up on the right wing. He chips it in towards the runner in the area, IT’S ARRUDA! ARRUDA SCORES! I’m on my feet and punching the air, a full debut goal for our new striker: a nice volley with his instep.

“A nice signing”, I think to myself, “and well worked by Medeiros”. I smile smugly. Roger sees me and gives me that frown-with-a-raised-eyebrow look that smart-arses often do. But Roger’s cynicism can’t hurt me now. Not while I’m swaddled in this warm, soft blanket of vindication.

5 minutes later a decent Torreense passing move ends with Esgaio hitting a looping shot from the edge of the area which hits the angle and bounces away. It takes less than a minute more however for Burguette to hoof the ball forward from the half way line. Over our striker it goes, over the midfield, and crucially over 6’4″ centre back Ivan Santos. Bonifácio takes the ball down unopposed and places it into the bottom corner. Goodbye vindication blanket. Hello again Roger. Put your eyebrow down you dick.

With 18 minutes to go Valadão stands over the ball 25 yards out. We have a direct free kick in a central position. Surely this is the moment. “VAMOS CAPITÃO”, I shout, making full use of the teachings of my brand new Portuguese phrase book. Valadão smashes it over the wall, and off the bar. I groan as the ball bounces away and is cleared.

The 90 minutes are up and the referee signals for 2 minutes of injury time. I’ve not made a substitution or even a tactical change since the first half. The game is on a knife edge and I don’t want to rock the boat.

With 40 seconds to go in injury time, Torreense come forward. My heart is in my mouth. They work the ball around well, and Pereira picks it up 25 yards out. He hits a hopeful shot, but Azevedo catches it easily. I breathe a sigh of relief.

Azevedo drops the ball and looks up for options, before hoofing it forward towards Kevin. Kevin nods it on but a Torreense defender boots it away again. Now Valadão gets the ball and hoofs it forward again. There are 15 seconds to go. Arruda with his back to goal nods it down to Kevin, who shimmies around a defender, avoiding his challenge.

He looks up and time seems to stand still. What does Kevin do? He’s about 25 yards out from goal but defenders would surely block any attempt at a shot. He’s got Arruda right in front of him with 2 Torreense players marking him out. He’s got Aurélio in the centre, again marked out. And he’s got the runner on the far side, Benjamim. He isn’t marked as he’s only just arriving and I don’t think Torreense have spotted him, but it would require a truly needle-threading pass to find him through the tiny gap in the wall of Torreense players. So what does Kevin do?

Benjamim shoots…AND SCORES! He wellies it from the edge of the area into the left hand side of the net! I do a Klopp-esque run onto the pitch to join in the celebrations, my vindication blanket attached to my shoulders and flying proudly behind me like a cape! “VAMOS HERÓIS!” I cry, before the players echo my words.

It’s a weird atmosphere to be honest. Pretty much dead silence. By the looks of it, our supporters don’t really travel, and I can’t blame them don’t get me wrong, but there are 2 supporters of ours cheering and screaming amongst a sea of over 500 home fans. I did notice that Carapinheirense had brought a single lonely fan to our game on Saturday, where nearly 300 of ours turned out, so maybe no fans travel to Volcano Island either.

Nevertheless what an incredible ending to a so-so match. Benjamim, the unlikely hero with the goal. But I’ll learn from this match. We were not good value for the win. It could’ve easily been Torreense celebrating the 3 points.

Negatives? Our centre backs with a combined height of nearly 12 and a half foot were done by a hoofed ball over the top, and in general we looked sluggish and static off the ball, letting Torreense play around us.

Positives? The team showed a never say die attitude and didn’t stop fighting. A good goal from Benjamim, great assists from Medeiros and Kevin, and a full debut goal for Arruda. Plus, even though he hit he bar today, O Capitão is excellent at taking free kicks and that’s a big plus.

So there you are, midweek games are fine. Sure, they knacker your squad, especially if you make the questionable decision not to bring on any substitutes at all. But they build momentum, and we’ve now got momentum in abundance.