My name is Roger Mendes. And I will be a Football Manager. 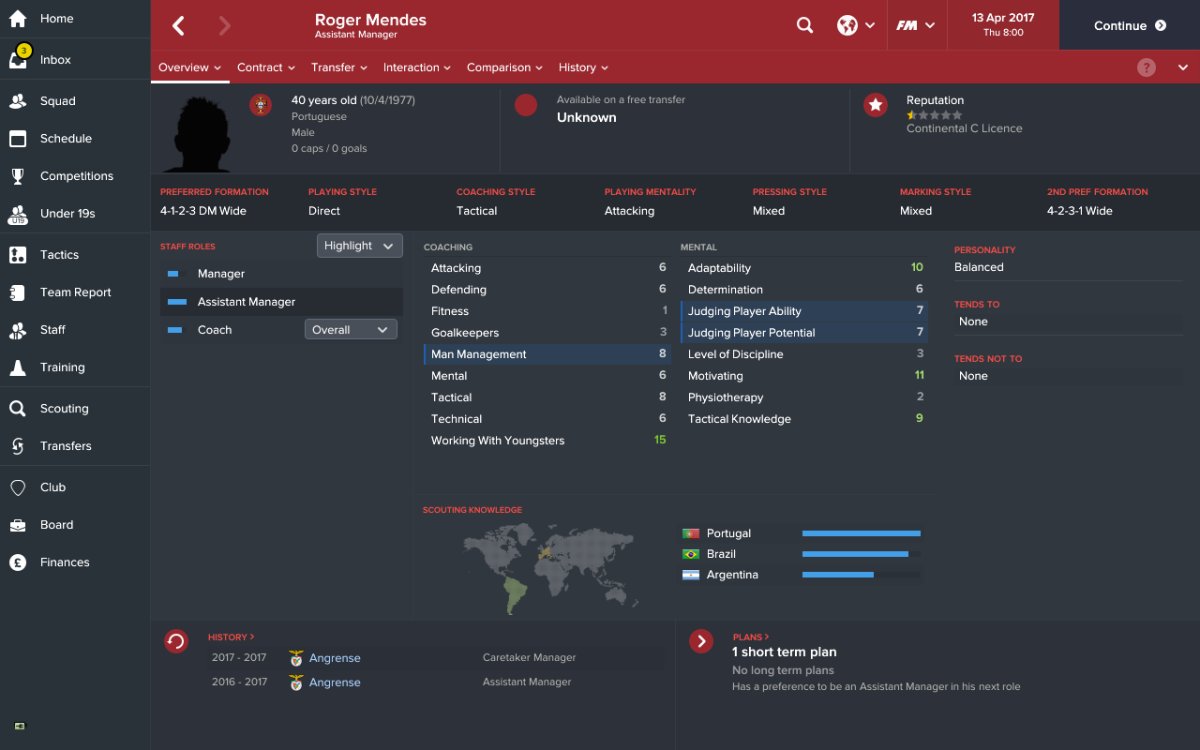 The final whistle goes, and pure elation washes over me. I can see it, hear it, and I can feel it. We’ve won. It’s all been leading to this. All of the late nights, the tears, the despair, all of the merda I’ve been through in my managerial career… It’s all been worth it. I lead the team up the steps towards the trophy. The path is barely visible through our adoring fans: leaning in, cheering, patting backs, ruffling hair, taking selfies. This is for them. All tens of thousands of them, and the millions watching at home. We’re moments away from lifting the Trophy. We have done it…And then I wake up. Bolas.

Becoming a Manager isn’t something that just happens. You can’t just wake up and walk into a Football Stadium asking if they have vacancies. Management is something that most in the profession have spent their lives learning. My name is Roger Mendes. And I will be a Football Manager.

Eduardo lost his job today. Senhor Borba expected us to reach the promotion stage of the PT Championship and instead we’ll be playing in the relegation stage. But I thought maybe this could be my first step. I saw my chance and I applied for the role of first team Manager.

I interviewed for the Angrense job today! It went brilliantly, Senhor Borba was extremely supportive and listened keenly to my ideas for the squad. I believe the only other candidate for the position has half a robot face and he’s relegated the only other team he’s managed, so he shouldn’t be a problem.

I didn’t get the job. Senhor Borba hired the English robot man who relegated his old team. I’m confused, maybe even saddened, but I’m a professional. I’ll try to learn from him and become a better manager, even though the first thing he said to me was “Let’s face it Roger, you’re no Joakim”. I don’t know what a Joakim is but I don’t think he was being friendly.

I arrived at our ground early before Franjo’s first match in charge. I thought he might need some help. I saw him trying to befriend Nuno, which was difficult to watch. Nobody has successfully befriended Nuno that I know of. I berated Nuno afterwards because he walked away laughing. We need to get behind the Manager. For the good of Angrense.

I’m impressed with Franjo. He won on Sunday against Carapinheirense, and again tonight against Torreense. Maybe there are a few tricks that I can pick up from him. Something odd happened though. After Hélder Arruda scored against Torreense the manager had this deranged smile on his face. I couldn’t understand what he was doing, and then he caught my eye and glared at me. I really don’t think he likes me.

Nuno is still being incredibly rude to the new manager. I have told him to show respect, but he just ignores me.

We tried the Manager’s new system today and it worked very well. I think he still has some sort of hostility towards me so I tried to break the tension by asking him whether it was true that he’d named the system after his cat, because I think that if that’s true, it’s brilliant. He either didn’t hear me or he deliberately ignored me.

I haven’t been sleeping much this week. I worry that the Manager’s dislike for me is growing and it could cost me my job. I was so tired that I fell asleep during the 0-0 against Sernache. In my defence it was a very boring match. I have come up with a plan though. I’m going to invite Franjo to play some board games with me and let him get to know me. I’ll let him see that I just want what is best for the club.

I think I messed up. I let Franjo win at connect 4 and he was being an incredibly sore winner. I got so annoyed that I told him about Eduardo’s win over Porto. He didn’t like it. He stormed off. I may have just made things worse.

Everything is going wrong. Senhor Borba is not pleased with the new Manager, he heard that he’s planning not to renew Aurélio’s contract. Senhor Borba came and spoke to me when he found out. He wants Aurélio’s contract to be renewed as he sees him as indispensable. He even got me and some of the coaches to rank the squad out of 5 stars to try to convince the Manager how important he is to us.

I came in early for the match again today. Senhor Borba was there too. He came and asked me if I had talked to the Manager about Aurélio. I told him that I hadn’t had the chance and he made me promise to talk to him in the next couple of days. I’m going to ask him to play connect 4 again. I’ll even let him win again. We caught Nuno eavesdropping on the conversation and Senhor Borba told him not to disclose to Franjo what he had heard. Franjo turned up soon after anyway and I know that he knew that we were talking about him. I just hope his Portuguese is still bad.

Franjo agreed to play connect 4 again but he wasn’t interested in anything I had to say about Aurélio. I also think I was a little bit too obvious that I was letting him win. Senhor Borba won’t be pleased.

A breakthrough! At last a breakthrough! An exhilarating win after the mid-stage break and I got a high five after each goal from the Manager! I think I might be safe after all. I’m so relieved. I love SC Angrense. I don’t want to leave.

I was called into the Manager’s office today. Sat next to him at his desk was an unfamiliar man. My heart sank. I instantly knew who the man was. I was told that I was being replaced as I was Eduardo’s assistant, but I know the real reason. I’ve been forced out of the club I love because the Manager doesn’t like me. He never liked me. I thanked him, but I didn’t mean it. I am devastated, but I’m a professional. I bit my lip and walked out with my dignity in tact, and I will keep working to be a Football Manager. This robot man will not discourage me.

I’ll get you back for this, Franjo. 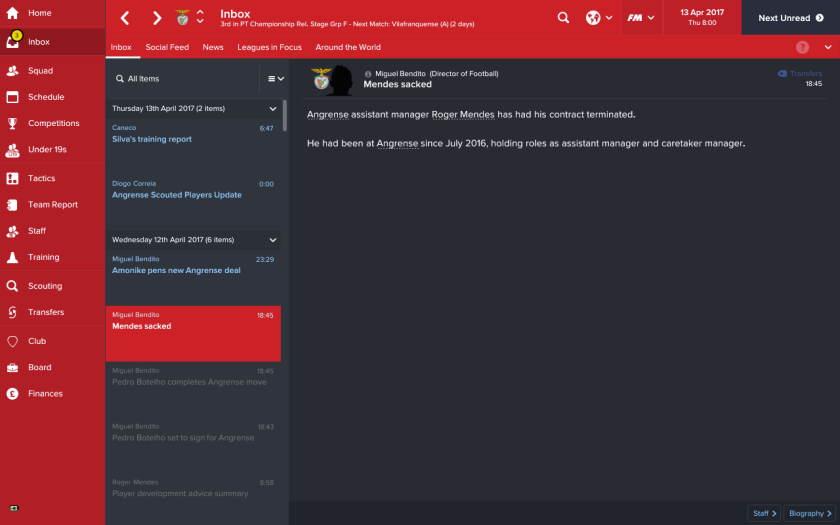 Find Franjo, not Roger on: