I’ve not been able to appreciate this place since I got here and I think that it’s about time I start. 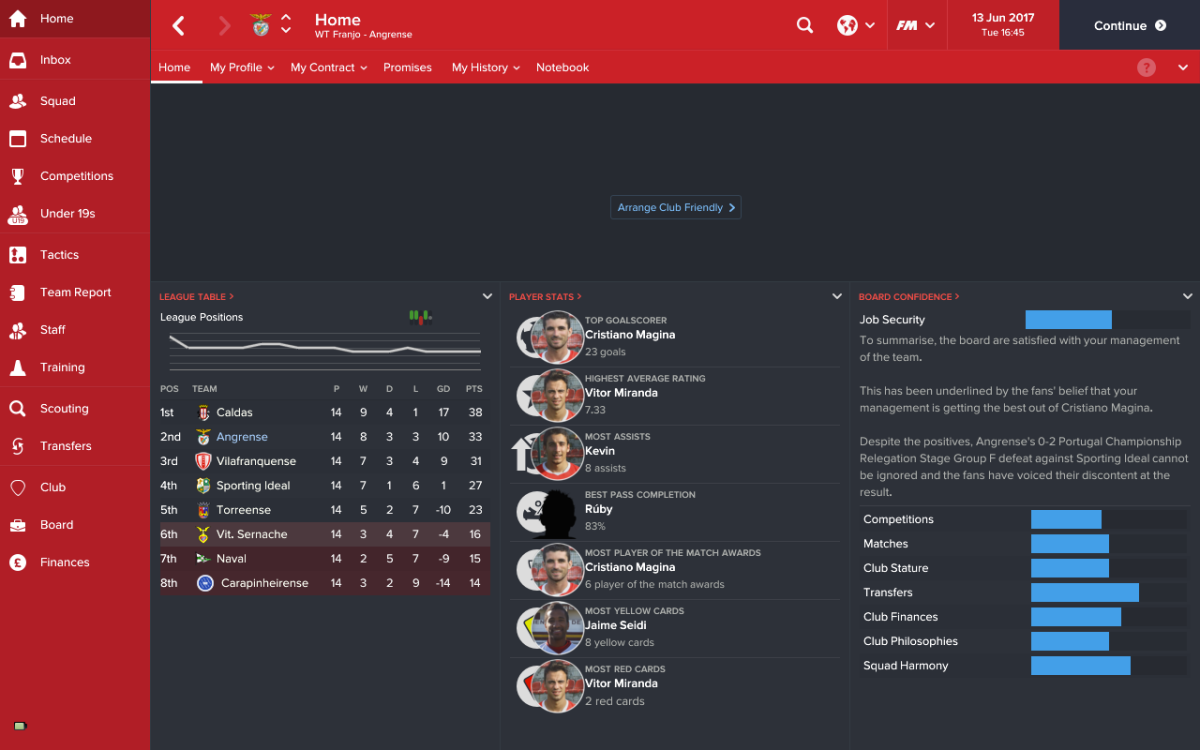 Do you know what I realised after our match against Caldas?

Here I am in the picturesque City of Hero Creek on beautiful Volcano Island and I’ve done nothing but scheme and worry and stress and glare at Roger for the last 4 months. And before that? Before that I was freezing to death, watching my dreams shatter before my very eyes in Southern Sweden.

I deserve a rest.

There is no training now. There are no matches in the foreseeable future. I have some players in mind that I’d quite like to add to the squad but I’ve got time to relax for a bit before I dive into all that.

The good thing about living in Hero Creek is that I’ve already essentially arrived at my holiday destination. I’ve not been able to appreciate this place since I got here and I think that it’s about time I start.

I take a look online at potentially interesting things to do around the city. The Festas Sanjoaninas look interesting and they’re happening on my doorstep: Parades, eating, drinking, bull fighting… I’m not a big fan of bull fighting… They don’t start until the end of June anyway and I’ll be busy by then.

In the end I decide to visit Monte Brasil, a peninsula just south of Hero Creek formed by several eruptions worth of dried lava from THE Volcano Island volcano, The Guilherme Moniz Volcano. You’re supposed to be able to get a great view of Angra do Heroismo from on top of a hill called Pico das Cruzinhas.

I don’t don my trusty grey coat, because if I truly wanted to roast I’d wrap myself in tin foil, and that comes with several negative connotations. Instead I opt for a full SC Angrense home kit that I received free of charge from Miguel Borba when I arrived at the club, I put on my sun cream and sunglasses, and complete the look with a pair of red and white sandals, because I’m an Englishman.

Meatloaf and Burnie both look curiously up at me as I pack my rucksack full of refrigerated bottles of tap water. I reach down and give them each a scratch behind the ear. I consider for a moment bringing them with me, but I think they’re all set. They’ve got everything they need right here for their endless schedule of eating and sleeping and nothing else.

I set off walking down an Asphalt path towards Fortaleza de São João Batista (St. John the Baptist’s Fortress). The sun is especially intense today and I’d broken a sweat by the time I’d walked to the end of my street, but I press on.

After an hour the dehydration is setting in. I thought I had come prepared, bringing all those bottles of tap water with me, but after an hour in my rucksack they’re all warm and unsatisfying. I’ve drunk one of the bottles already. I hope theres a corner shop on top of this pile of dried lava.

After 2 hours I’m staggering. I’ve only got half a bottle of water left. I’ve kept plodding on down asphalt and dirt paths but the sun, although it’s beginning to sink down behind the horizon, is still draining. I meet a large dog, a golden retriever, and for a couple of minutes I forget the heat and smile as he trots happily alongside me, spurring me on, before he barks and runs back the way we came, out of view. My smile fades. I’m alone again.

And then, not half an hour later, I arrive on top of Pico das Cruzinhas. It’s considerably less light than it was when I set off but it’s still incredibly hot and humid. I feel dizzy. Sweat is pouring down my face. But I’ve arrived at the viewpoint.

I set down my rucksack, full of empty water bottles, sit down on the patchy grass and look out over the city. Over my city. The view really is stunning. I can see the docks, the rows of little white stone buildings, Estádio Municipal de Angra do Heroismo… I can see everything. I can see the entire city bathed in the red and orange glow of the setting sun. And it’s all spinning. I feel sick.

“You look a little burnt there” says a loud, booming voice from somewhere above me. I almost jump out of my skin. I look upwards and the light seems to seep away all at once. The only things I see are clouds.

I look down again, wiping the sweat from my brow. I must have imagined the voice. It must be the heat. “Must it?” Booms the voice again. This time my eyes dart straight upwards, looking for the source of the voice. Again, all I see is clouds… but they look different to before… different shapes, different colours… and then the clouds start to shift. They start to move and interlock, break apart and come together again, before at last they take human form.

“Recognise me?” Rumbles the voice. The outline in the clouds is blurry, but definitely human. And then slowly, very very slowly, detailed features start to draw themselves across the figure’s face. I squint a little to make them out… Eyes, nose, mouth, and then a bleached blond goatee.

“Abel Xavier?” I ask, hearing the disappointment in my own voice. Xavier laughs a deep, thunderous laugh.

“It is I, Abel Xavier. I have come to guide you, Franjo.” He says theatrically. “I…” he pauses for dramatic effect, “…Am your spirit guide.”

“Oh.” I reply, making no attempt to hide my disappointment now.

“But what is wrong?” He asks, seeming slightly hurt.

“I don’t know. I get that if I’m going to have a hallucinatory Spirit Guide he may as well be Portuguese, but wasn’t Cristiano Ronaldo available?”

“Even Nani would do…”

“NO” He booms, quite frighteningly. Then he lowers his voice again to an overly-theatrical whisper. “I, Abel Xavier, am your spirit guide, and I have appeared because I need to tell…”

“But I don’t even like or respect you” I interject, in quite a whiny way. “You were shit at Everton and then you moved straight to Liverpool… And then you were shit for them, you’re the worst.”

“Sorry”, I interrupt again, very purposefully, “But I’ve wanted to get this out for 15 years and this is the first chance I’ve had.”

After a fairly long and uncomfortable silence Xavier composes himself and takes a deep breath. When he speaks, he’s whispering again. But his voice is shaking.

“Are you related to Rikishi?” I ask loudly. Xavier sighs. “You’ve just always reminded me of the wrestler Rikishi, and vice versa. I think it’s your hair. Your dumb hair.”

“I don’t have to take this”, Mumbles the formation of clouds resembling Rikishi’s probable relative Abel Xavier, “I’m the Mozambique head coach now, you know. I’m only appearing to help you.”

“I think I’m probably further up the Managerial pecking order than you already then.” I say coolly.

The form of Abel Xavier swirls and breaks apart and after a second or so I’m just looking up at the clouds once more. I wonder what he needed to tell me. It can’t have been that important, he was only a figment of my imagination. And I’m pretty sure if it was an important message I would’ve imagined someone more impressive.

I sit there for a while, watching the street lights flicker into life around Hero Creek. It’s an impressive place, you know. A brilliant place. I lie back on the soft tufts of grass and close my eyes.