I’ve been so preoccupied with my managerial duties that I forgot that football is happening everywhere.

I awake extremely early the next morning. Pushing myself to a sitting position, I can feel the numbness on my cheek where the pattern of the grass has been impressed after several hours of contact. My phone has run out of power and I’ve got a banging headache in the aftermath of my dehydration yesterday. This is not how good days start. I get to my feet and start to make my way back down the hill on which I accidentally stayed the night. Back down the gravel paths I walk as the sun starts to rise in front of me, painting the now fairly cloudy sky red and orange.

It’s late morning by the time I make it back to my flat. I fall through the door and throw myself onto my bed face down, as Meatloaf and Burnie watch on in vague interest.

I decide to take a look at what’s been happening throughout the world of football. I’ve existed in a bubble for the last year. I’ve been so preoccupied with my managerial duties that I forgot that football is happening everywhere.

I pour myself a glass of water and sit down with the laptop to see how the season’s gone elsewhere in the world.

I start off by looking locally at the Liga Nos. Our one time Parent Club Benfica took the title, 6 points clear of Sporting and a staggering 17 points clear of a disappointing Porto side. Manager of the Year was FC Paços de Ferreira’s Vasco Seabra, who guided his side to 4th and a Europa League spot, 8 places above their predicted finish.

Sporting’s Bas Dost scored the most goals with 19, just ahead of Porto’s André Silva. Benfica’s defence drew a massive amount of admiration, as Álex Grimaldo and Lisandro López were rated the top 2 players in the league, while Ederson won the golden glove. Pizzi was also instrumental for them, racking up the most assists in the division. Arouca’s Nuno Valente got the 2nd most. Now there’s a name that sends a shiver down my spine. 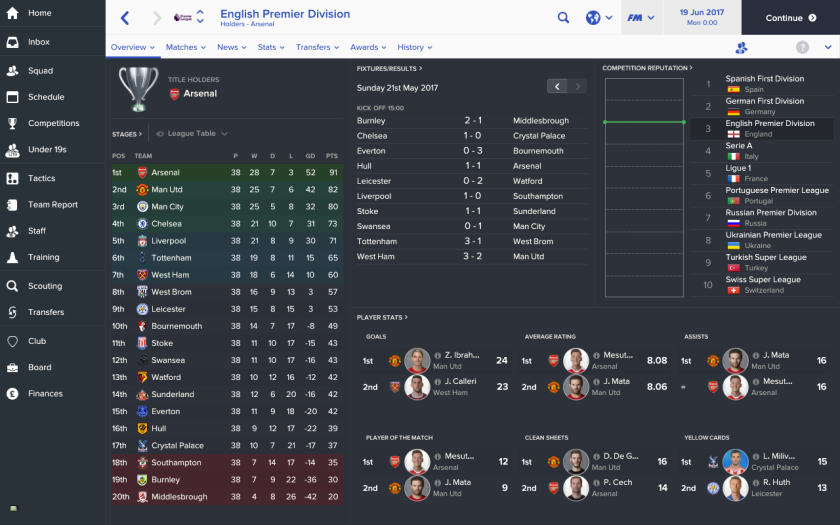 Back home in Blighty, obviously no eyebrows were raised whatsoever as Arsene Wenger’s side smashed their way to the title for the first time since their invincible 2003/2004 season. Arsenal finished on 91 points, 9 above José Mourinho’s Manchester United, winning Wenger the Manager of the Year award in the process. The big under performers had to be Michael Laudrup’s Southampton, who finished 18th on just 35 points.

They’ll be playing Championship football next season, unlike Rafa Benitez’s Newcastle, Mick McCarthy’s Ipswich Town and Steve Clarke’s Nottingham Forest, who are all promoted to the Premier League.

In the Premier League, United’s Zlatan Ibrahimovic was the highest scorer, closely followed of course by West Ham’s Jonathan Calleri. Arsenal’s Mesut Özil and United’s Juan Mata both had very good seasons, with plenty of assists and player of the match awards between them. David de Gea won the Golden Glove.

Again, nothing to see here: La Liga was won fairly comfortably by who else but Diego Simeone’s Athletico Madrid! 6 points ahead of Zinedine Zidane’s Real Madrid and a further 5 points ahead of Luis Enrique’s Barcelona side. Simeone deservedly won the Manager of the Year award for his efforts.

Antoine Griezmann was the top scorer this year, just ahead of Cristiano Ronaldo, and Lionel Messi and Neymar both had excellent seasons for Barca. Real’s Keylor Navas won the Golden Glove.

There really were no surprises in the Bundesliga as Carlo Ancelotti’s Bayern Munich obliterated the rest of the division. They finished 16 points clear of Roger Schmidt’s Bayer Leverkusen, who were themselves more than comfortable: 11 points clear of Ralph Hasenhüttl’s Red Bull Leipzig in 3rd. Hasenhüttl still picked up the Manager of the Year award for reaching the Champions League.

The season was a disaster for Dieter Eilts’ Werder Bremen team but even more so for Bruno Labbadia’s Wolfsburg. Both sides fell well below expectations and will be playing Bundesliga 2 football next season.

Mats Hummels, Jerome Boateng and Manuel Neuer took the plaudits for their efforts in Bayern’s defence, but it was Bayer’s Kevin Volland and Leipzig’s Yussuf Poulsen who impressed at the other end of the pitch, scoring 24 and 20 goals respectively. Hamburg’s Lewis Holtby and Freiburg’s Vincenzo Grifo racked up the most assists.

The title race was surprisingly close in Italy, but Massimilliano Allegri and his Juventus side eventually took the title on 81 points, breaking Inter hearts as they were only 3 points behind. Their striker, Mauro Icardi, was the league’s top scorer, with his Milan rival Carlos Bacca coming in 2nd. The golden glove went to Gianluigi Buffon but just like in the league, Inter’s Handanovic made it a close race. Leonardo Bonucci and Paulo Dybala also had excellent seasons for Juve, while Dries Mertens and surprisingly Ledian Memushaj of relegated Pescara were the top assisters. Sampdoria’s Marco Giampaolo won the Manager of the Year award for performing above expectations, although they narrowly missed out on a European spot.

Monaco managed to overthrow Paris Saint-Germain, who are known globally as “The Celtic of Ligue 1” to top the charts in France. Radamel Falcao’s return to the club played a huge part in Monaco’s league triumph, as he racked up 22 goals, 2 more than his rival Edinson Cavani. Thiago Silva and Bernardo Silva were the standout players this year, while Bernardo was also by far the top assister ahead of William Vainqueur of Marseille. Benoît Costil had a magnificent season for Stade Rennais and kept the most clean sheets in the league, but he lost the golden glove award to Danijel Subasic. Leonardo Jardim of Monaco won the Manager of the Year award for ending PSG’s stranglehold on the division.

What a strange year. All of that just goes to show it doesn’t really matter who the team is, anything can happen. With the right or wrong Manager, Players and System, Arsenal can win matches after February, Forest can win promotion, Southampton and Wolfsburg can go down, Atleti and Monaco can win titles that usually have “Reserved” labels on them…

I hope that at some point I can achieve that level of unexpected success with an underdog. But there’s also a pretty good chance that I’ll relegate a good team. What an exciting and terrifying thought.

My name is Franjo. And I will be a Football Manager. View all posts by wtfranjo