The thing about having a 100% record is that you start to become terrified of losing your 100% record.

FYI – I’ve retrospectively added video highlights for every single match we’ve played in this Story – Both the Höllviken and Angrense matches. Enjoy!

OK, we’ve won 8 competitive matches in a row since the start of the season. That’s a 100% record. The thing about having a 100% record is that you start to become terrified of losing your 100% record. It’s nonsensical. I feel like because we’re doing so well the pressure on me is mounting up more than it would be if we’d dropped a few points.

It’s cup day today. The third round. We’ve beaten a lower league side and a LigaPro side so far in the Taça de Portugal, and now we face someone on our own level. 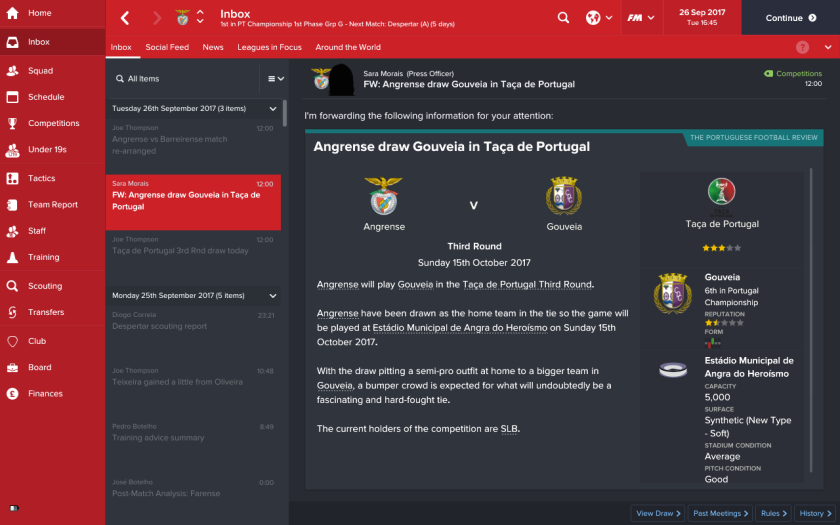 Gouveia haven’t made the best start in Group D of the Championship. They’ve picked up 6 points in 6 matches so we should really be turning them over.

I’m staying consistent with our lineup though, I won’t be sending out the reserves because I’d quite enjoy a good cup run. We go Project: Meatloaf and we go with a very predictable lineup.

We go 1-0 up quickly when Benjamim stabs the ball home from close range after Magina helps the ball on from an Antunes pass. That’s his 1st goal of the season.

Kevin nods down an Amonike corner to tee up Magina after quarter of an hour but his shot is saved brilliantly from rolling into the bottom corner by Bolas.

5 minutes later though, Magina releases Benjamim again and he drills the ball into the bottom corner from the edge of the area.

With 22 minutes gone, Lassina Touré picks up a booking and just 5 minutes later he leaps to head the ball and decides to slap it with his hand instead. He sees a 2nd yellow, which makes things tricky. I bring off Antunes, keen to give him a rest anyway, and replace him with Seidi. Our shape changes to more of a 4-1-1-2-1.

We keep pushing anyway through the rest of the first half. Magina goes close when he runs from deep but shoots straight at Bolas, and then a good cross from Vitor Miranda is nodded down for Magina by Amonike, but the usually clinical striker blazes the ball over from just inside the area.

At half time we keep the same shape but change our system to the more reserved Heróis Original. Diogo Coelho comes on for Amonike.

It takes less than 30 seconds of the second half for Coelho to play a great ball through for Kevin at the far post, but his half volley comes back off the post.

After an hour I give Bruce Ávila a run out. Kevin gives the armband to Jaime Seidi as he makes his way off.

10 minutes later, Tiago Silva (Not that one) gets on the end of a great Gnahore through ball and slots the ball away to make things interesting.

From then on we try to kill the game with counter attacks. Mauro Aires goes closest when he takes down a Seidi free kick and puts the ball just over, but when our 3rd goal does come it seems familiar. Magina sets up Benjamim, who boots it into the top corner. For those keeping count, that’s 3 assists for Magina and a superb, unexpected and completely deserved hat trick for our number 17. 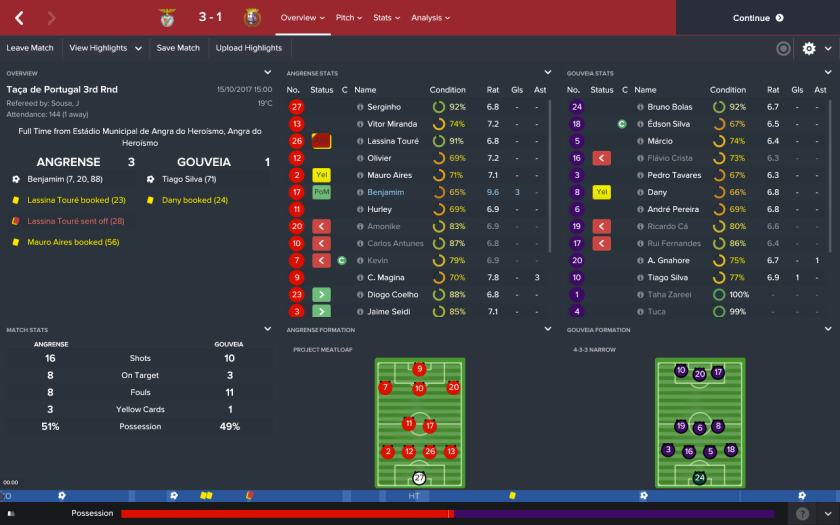 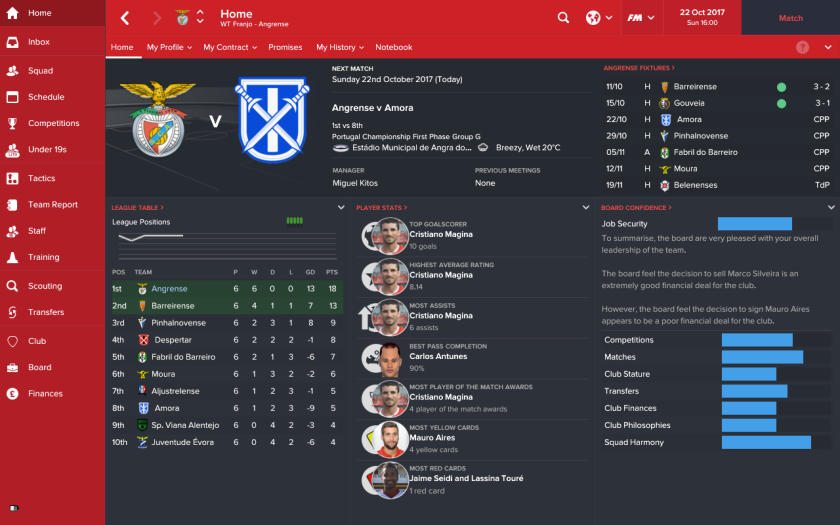 What can we do to put a cherry on top of that win then? How about a new long term contract for Carlos Antunes? Go on then. To be fair we agreed this contract shortly after he made his debut for the club but he’s only just turned 17 so has only just been able to sign. I am very pleased. He’s getting better and better, he’s proved himself to be mature beyond his years and he’s shown that he’s absolutely ready for the starting first team spot I’ve given him since Medeiros left.

Incidentally, with the Belgian Pro League about a third of the way done, Medeiros has sadly only made 2 substitute appearances. He’s got work to do if he’s to break into the first team by the look of it.

I’d tell you how Marco Silveira’s doing at Craiova but I honestly couldn’t give less of a shit. In fact looking through our list of outgoing transfers from the Summer, the only one that really interests me apart from Jordanes is Diogo Silva, a young centre back that I doubt I ever mentioned to you. He was 4th choice so I don’t think that he ever featured for me last season, and because of the imminent arrivals of Olivier and Touré I allowed his contract to run out in the hopes that he’d go and get first team football somewhere else. And he is. He’s getting a fair bit of game time for a little club from Merseyside named Tranmere Rovers.

Anyway, up next is Amora at our place. Amora have the worst goal difference in the league with -9. They sit in 8th place having lost half of their matches and won just the once.

The only changes we make are Batista coming in on the right in place of Amonike, who hasn’t been having a massive impact of late, and Seidi coming in for the suspended Touré at the back.

We start well, which is starting to become a very pleasing trait of ours. Batista instantly justifies his inclusion when he swings a cross in to the edge of the area in the 7th minute. Kevin hits the ball on the volley and it bounces off Magina on the way in.

Seidi gets the ball into the back of the net after quarter of an hour after an Antunes free kick is nodded on by Olivier, but the goal doesn’t count as Jaime had strayed offside.

Never mind though, 5 minutes later a great passing move ends in Magina getting yet another assist. This time he plays Antunes through and the young number 10 celebrates his new contract by drilling the ball past poor Kiko to double our lead.

I’m quite hopeful of putting 1 or 2 more past Kiko before half time, but as it transpires the rest of the half is cagier. It’s not until 10 minutes after half time that we go close again. Benjamim threads a pass through for Batista on the right, but he drags his shot wide of the far post.

2 minutes later we do bag another, and Magina bags another assist. He’s had an incredible start to the season. This time he lays the ball off for Hurley, who slams the ball to Kiko’s right from the edge of the area.

With half an hour to go Batista again puts the ball wide of the far post when Magina puts him through. Shooting is definitely something to work on for him.

I bring on Renato Silva for the last 20 minutes to give him a chance to shine. Magina makes way and Silva instantly sets up Hurley for a good chance, but Kiko gets his hands to the ball possibly for the first time.

For the last 10 minutes I give Rúby and Ávila a run out, and with 6 minutes to go, Amora decide that they’re ready to play some football. Pardal squares the ball for Afonso, who takes a touch and smashes it off the bar. At least the away fan had something to get out of his seat for eh?

So that’s 10 wins in 10. I’m still terrified of losing our 100% record for some daft reason, but Magina has no such concerns. He’s in the form of his life, having scored 10 goals and assisted 8, and it’s an absolute pleasure to have him in the squad.

After our next 2 matches, we’ll have reached the half way point of the first phase. But we’ve still got to get through Pinhalnovense and Fabril do Barreiro, who are 3rd and 4th respectively. And bloody hell if we can beat both of them, I’d back us to win all 18 matches. 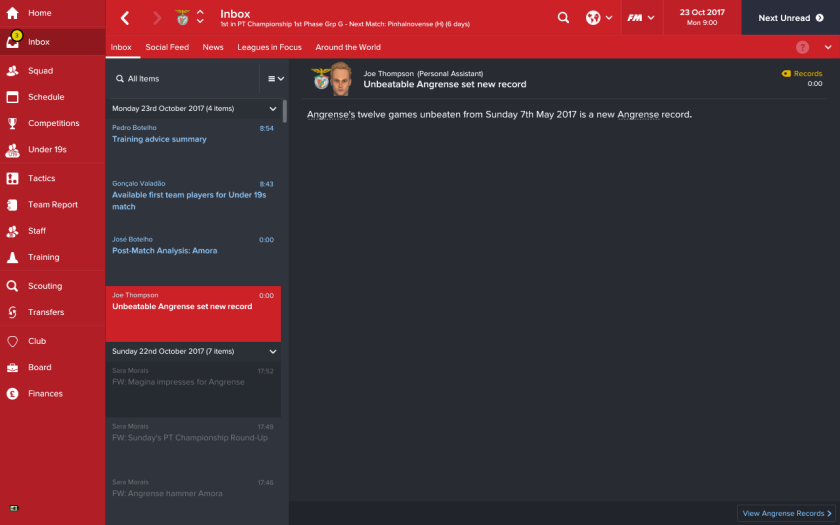