“Pedro,” I croak, before coughing down the line, “I won’t be coming in for the match today. I’m very sick.” I cough again.

I reach across to the bedside table for my phone. Finding Pedro’s name in my contact list, I dial the number. The phone rings twice before Pedro picks up the phone. “Hello?” He asks.

“Pedro,” I croak, before coughing down the line, “I won’t be coming in for the match today. I’m very sick.” I cough again. 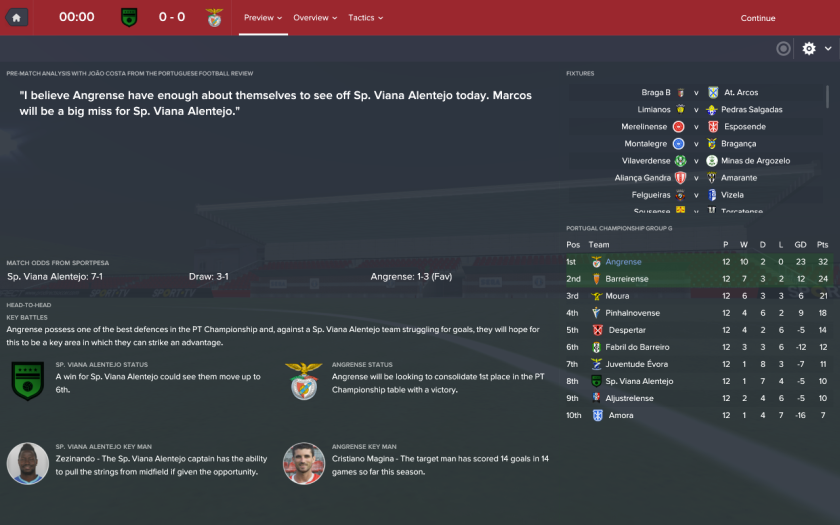 “That’s not important,” I mumble. “Just keep me updated will you?”

“Of course,” says Pedro. I hang up without saying goodbye, like in the films.

I know this is highly unorthodox, but I really can’t make it in today. I have a very generic and non-specific illness that will keep me out for exactly 1 match. When you think about it, it’s amazing how rare it is that Managers miss a match through illness. It really is. Surely we’re allowed to pick up the odd stomach bug or bout of flu. I genuinely can’t think of a single time this has happened off the top of my head, but here we are.

One of the symptoms of my illness is that every time I drift off to sleep, I have the same dream: I go to Viana’s stadium, I pick the team, I start the match, and then everything freezes and I wake up. It’s really odd. I guess it does make a change from the other recurring dream I’ve been having. The one on top of Pico das Cruzinhas. The one where I’m falling…

That reminds me actually, I haven’t picked the team. I scribble a quick text to Pedro:

It takes quite a long time to write. I keep deleting Magina, writing Silva, then deleting Silva and writing Magina. This goes on for a while. You probably have questions, so let me answer the easy one first. Serginho started the season strongly but hasn’t been particularly impressive of late. I definitely don’t blame him for Belenenses knocking us out of the Taça de Portugal but in general he’s given me no reason to keep him as our undisputed number 1. Azevedo gets a chance to steal the shirt today.

Magina… Magina is a good striker. He threw his toys out the pram during the summer but we didn’t have any matches so I didn’t need to drop him. The fact is that I want to keep our good run of league results going. Our performances have been dropping but I don’t want to chop my nose off to spite my face. We might end up losing a match if I keep CM9 sidelined, and it would be purely because of my pride. I’ll take the knock to my pride and keep plugging away for an unbeaten first phase. Plus, it would be unfair to rush Silva into first team football when he’s not ready, and Arruda’s making his own noises about wanting to leave for first team football. Magina starts. 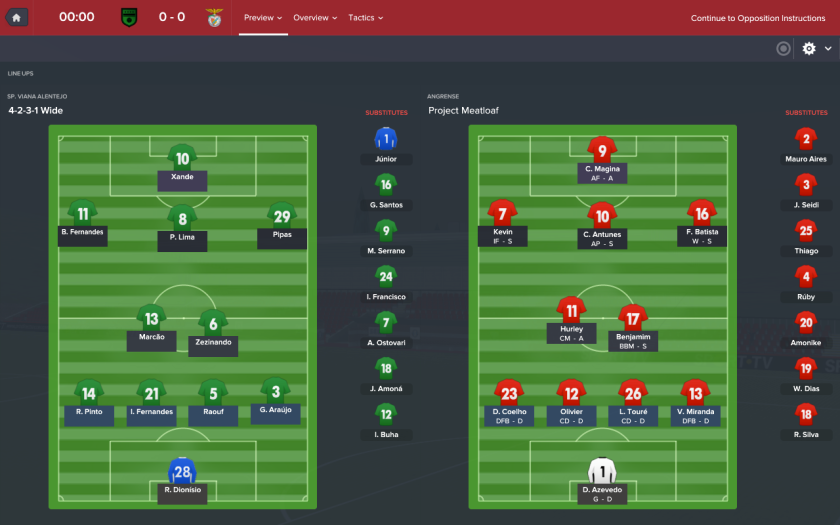 Pedro actually does pretty well. He keeps me updated on the key events and I fear for the worst when Pipas opens the scoring for Viana, but Magina bags a goal either side of half time to get us the win. He also gives a rare substitute appearance to Wilson Dias. Well in Pedro. 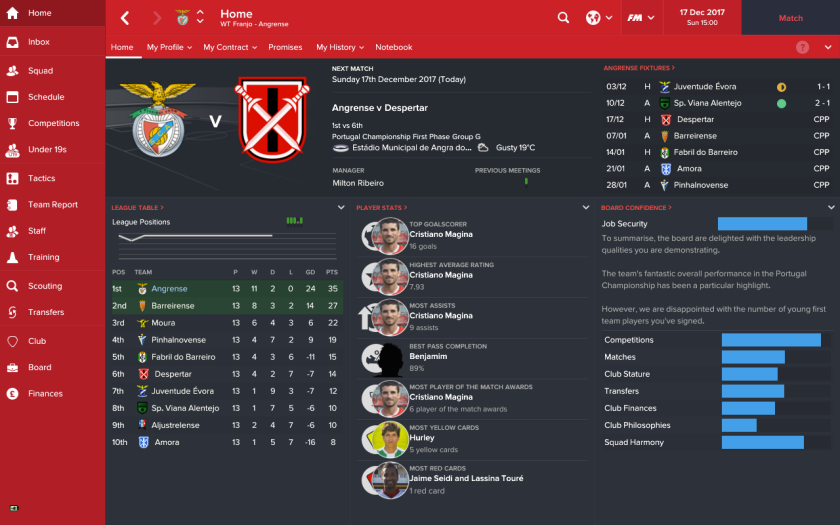 Luckily, I’m fighting fit for the next match – At home against Despertar. They’re doomed to the relegation stage, having lost over half of their matches and sitting in 6th. We just need to avoid defeat today, and then 4 more times after Christmas to complete our unbeaten phase. We go unchanged. We go Meatloaf. 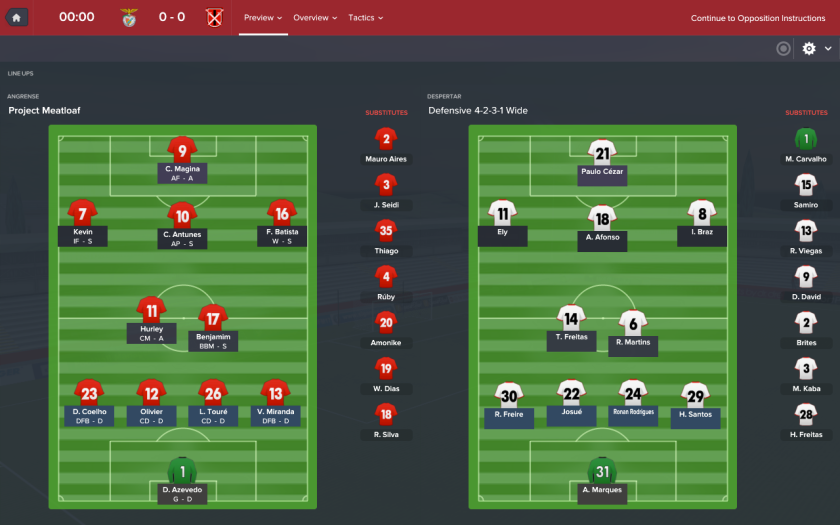 With less than 4 minutes gone, Batista sends a cross in from the right and Hurley puts us ahead with a simple finish.

It’s a cagey half but before half time we get a 2 goal cushion when Antunes sets up Hurley for his 2nd, a significantly more impressive strike from the edge of the area.

The 2nd half is not entirely impressive by either side. Paulo Cézar goes relatively close a couple of times, dragging a shot wide from the edge of the area before bobbling a bizarre 30 yard shot comfortably into the arms of Azevedo. Apart from that, we are not troubled. Hurley picks up a knock but he’ll be back for the next match.

With that win, we officially qualify for the Promotion stage of the PT Championship. We’re 11 points clear of Barreirense and 13 points clear of Moura. This season so far has been absolutely outstanding.

And that’s it for December. Christmas is only a week away, and after that’s out of the way it’s time for January. January is a huge, huge month. We face Barreirense first, the closest team we have to a rival, followed by presumably simple ties agains Fabril and Amora, and we finish the month against those bastards Pinhalnovense. The team who first cost us our winning streak. It’s going to be a hell of a month.