Barreirense put up a fight in Hero Creek, taking the lead twice before we finally turned the tables, and now we’re travelling to Barreiro

Tears have been shed today. I imagine that back in my home country, the land of Big Ben, white cliffs and Spitfires, the national flag is flying at half mast. Sweden, of course, will be in just as mournful a mood. I spare a thought for the good people of Vellinge, where my name is mud and the burning of my likeness has become a local holiday. I know that wherever they are, Darius Vassell and Michael Ricketts are crying big, slow tears. The world of football has lost a strange but intriguing man. Enjoy your retirement, Sven.

Some awards have been dished out since our last match. Not Angrense-related awards, but global ones. And they all seem to follow a theme…

Despite Barcelona finishing 3rd in La Liga, Lionel Messi has had to build an extension to his trophy cabinet in order to store the Footballer of the Year, World Golden Ball and World Player of the Year awards. Mesut Özil will probably be slightly annoyed at finishing runner up 3 times despite guiding the Gunners to their first Premier League win in 12 years, and Luis Suarez completes the trio, placing 3rd in all 3 awards.

Unsurprisingly, they all took a place in the World Team of the Year too, forming the front 4 in a 4-2-3-1 with Neymar, the final component in Barça’s MSN. Behind them is an extremely attacking central midfield partnership of Tottenham’s Dele Alli and Manchester City’s £39Million summer signing James Rodríguez. Bayern dominate the defensive positions, with Manuel Neuer joining defenders Jérôme Boateng and Mats Hummels. Real’s Marcelo and Juve’s Bonucci make up the XI.

This is it then. Back to work. We’ve already qualified for the Promotion Stage so we shouldn’t fear anyone at this point, not even 2nd place Barreirense. But a result here isn’t a given. Barreirense put up a fight in Hero Creek, taking the lead twice before we finally turned the tables, and now we’re travelling to Barreiro, a place that we’re becoming rather familiar with thanks to the fact that seemingly half of our group is based there. Hurley, although recovered from the injury sustained in our last match, is suspended for this one, so Rúby comes in alongside Benjamim. Batista, who I heroically rescued from being snapped up by a much bigger club yesterday, starts on the right.

3 minutes in, and after a good Barreirense move that culminates with a Santos through ball and a Caraballo shot that’s saved by Azevedo, Olivier swings a foot at the ball to clear our lines, but only succeeds in smashing it against the striker’s shins. The ball rolls over the line and they’ve taken the lead over us again.

Barreirense continue to dominate the first half but without making any sort of chances. On the half hour mark, I tell Os Heróis that we are to play on the counter. That evens the match out again, but it isn’t until the stroke of half time that Antunes lays the ball off for Batista, whose whipped cross is accidentally turned in by Dujardin for the equaliser.

With 20 minutes to go, Breimyr picks up what I would describe as a soft 2nd yellow for getting too close to Kevin. Despite playing against 10 men, and despite the introductions of Coelho, Thiago and Silva in an attempt to take control of the match, we aren’t able to find the winner. 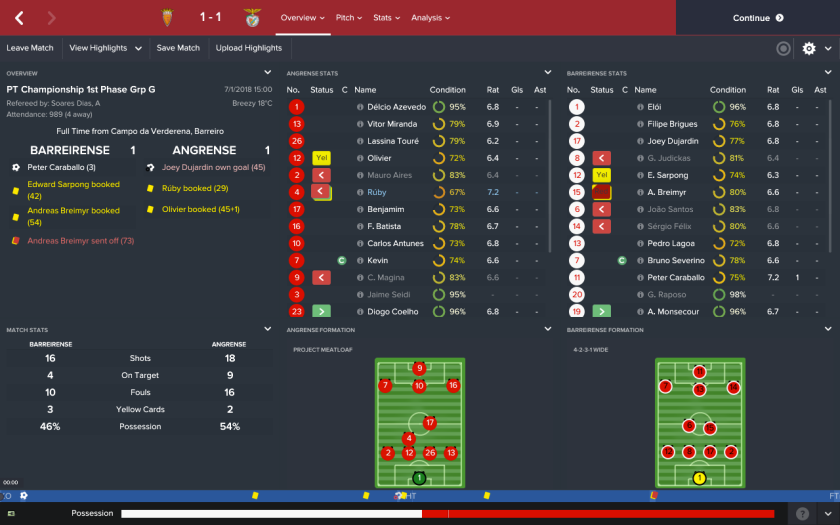 I’ll take that. They’re a good team. Now we realistically only have to make it past Pinhalnovense on the final day to achieve an unbeaten phase. Well, Fabril do Barreiro and Amora too, but come on.

One thought on “Back To Work (Franjo: A Journeyman Story – Ep36)”