I take a deep swig from my water bottle. The water tastes sweet. Almost like vindication. 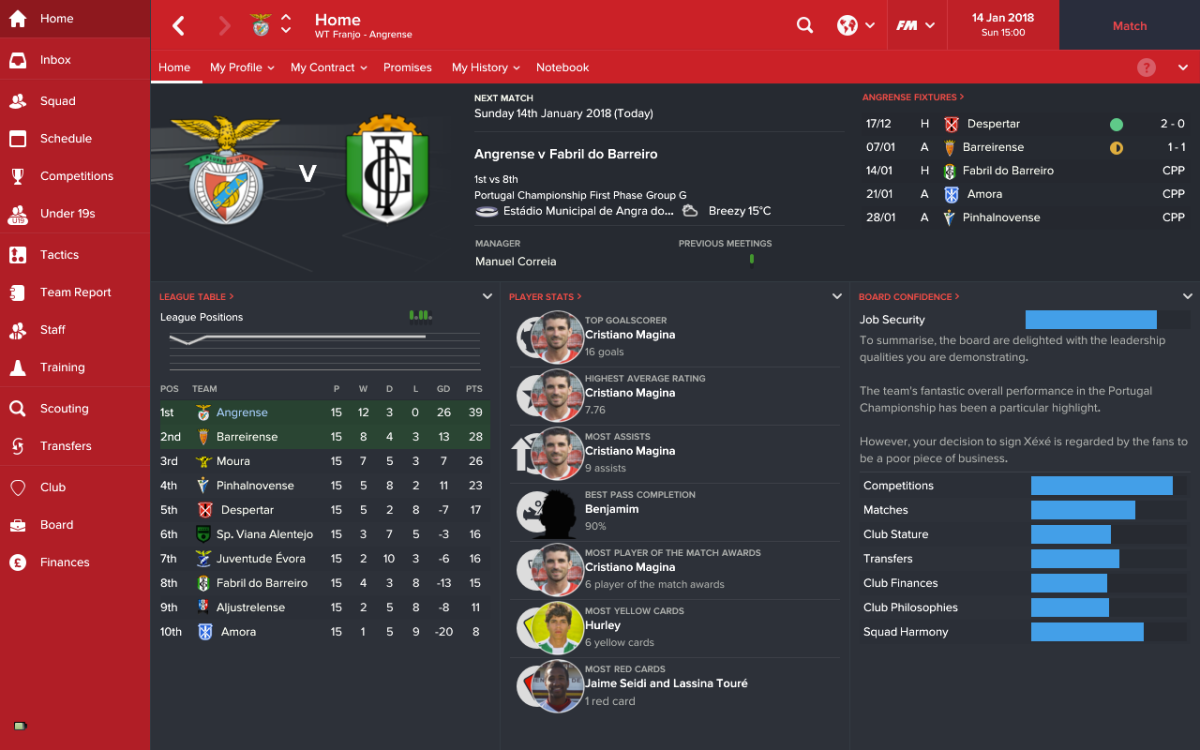 Miguel Oliveira is off in the Summer. I thought I’d rip that bandage off as quickly as possible to spare you the heart ache. I lost faith in Miguel’s ability about 5 or 6 matches after I arrived and was not planning on offering him a new contract, so Panachaiki have swooped in and arranged to whisk him away to Greece on a free transfer. Good luck to him. If he throws plates half as well as he throws away his marking responsibilities he’ll be fine.

Annoyingly, having just played Barreirense in Barreiro last week, we’re now playing Fabril do Barreiro in Hero Creek. We could have stayed through and had a nice holiday there if we were playing at their place, but never mind.

Fabril are the team that play with that narrow diamond that prompts us to focus our play down the wings, so that’s what we’ll do. Diogo Coelho is better at going forward than Mauro Aires, so he comes in at left back, Fernando Batista keeps his place on the wing after helping to rescue a point for us last week, and Renato Silva starts. I want to give him another chance seeing as the benched Cristiano Magina is sulking. 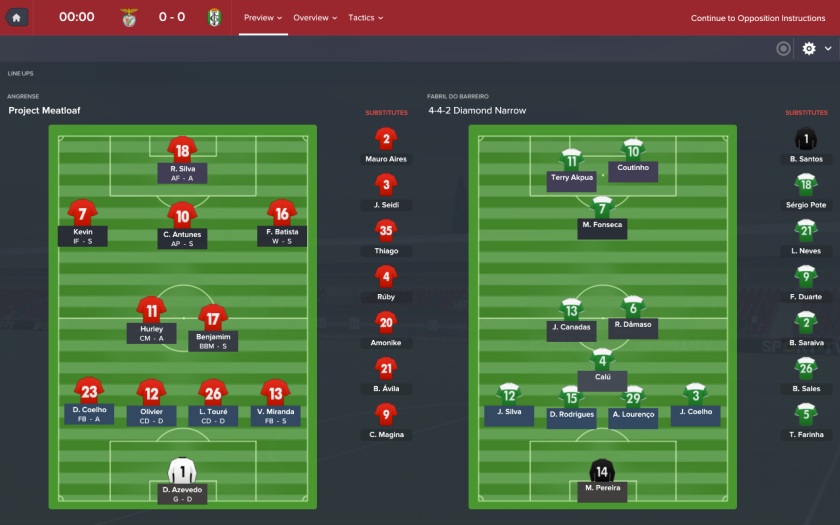 After half an hour, nothing has really happened. I’m getting quite tired of our poor first half performances, so I tell the team to attack. We may as well go for it against these.

5 minutes later, it’s clear that our right back, Vitor Miranda, has received the message. He finds himself on the edge of the Fabril box and chips the ball to Hurley. With 2 touches, Hurley brings the ball down brilliantly and skilfully uses the outside of his boot to send the ball fizzing in off the post. That man just oozes class. I take a deep swig from my water bottle. The water tastes sweet. Almost like vindication.

When half time rolls around I tell my Heróis to drop back slightly stop attacking quite as often. We have the lead now and all we need to do is protect it. I don’t want us leaving ourselves open at the back.

The 2nd half is a quiet affair. On the hour mark a Coelho corner is headed in by Olivier to double our lead in the simplest way possible. I bring on Rúby and Ávila shortly afterwards but they don’t have much of an impact. We happily let the clock tick away and leave with another 3 points. 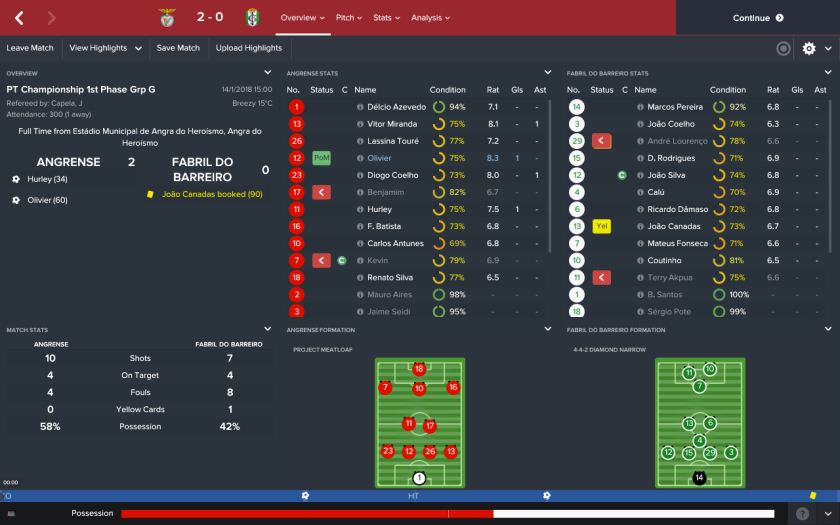 That was one of those matches that just sort of happens. We got what we wanted with no fuss whatsoever. I’m fine with that at this stage in the season. Let’s hope for a carbon copy away at Amora. What won’t be a carbon copy though is our lineup. Aires comes back in for Coelho as we don’t want our fullbacks pushing quite as high seeing as we’re away. Rúby starts in place of Benjamim, who I think could use a kick up the arse as his performances are dropping. Amonike and Bruce Ávila start as a pair of orthodox wingers in place of Batista and Kevin, and Magina comes back in to lead the line. Watching the last match, I forgot that Silva was playing. 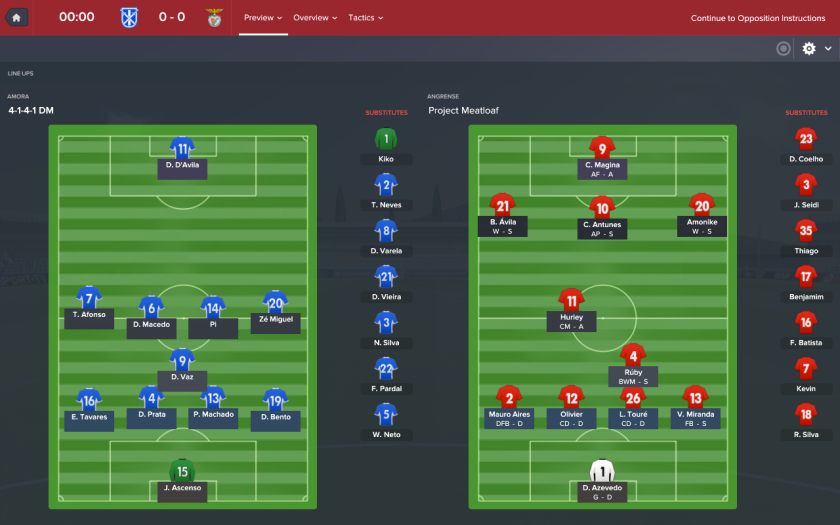 Quarter of an hour in, Magina releases Amonike down the right wing. The winger gets his cross into the 6 yard box where Ávila is arriving, but he gets it all wrong and heads wide from close range. I make a mental note to myself not to drop Kevin in future.

5 minutes later, Zé Miguel swings a deep cross from the right over to the far post. Afonso gets to the ball ahead of Miranda but can only cushion it unthreateningly into Azevedo’s arms.

Just as I’m wracking my brains for something constructive to say in my half time team talk, Zé Miguel gets in the thick of it again, but this time he pulls Lassina Touré’s shirt in the Amora area, granting us an injury time penalty. Magina steps up and confidently strokes it to the bottom left.

That actually makes my half time team talk incredibly easy. I tell them they look alright and ask them to go and get another to kill the game off.

Not 2 minutes later, Hurleys pass is knocked on first time by Amonike, and Magina places it into the bottom corner. Ask and you shall receive. I surely can’t let Magina go.

With just over an hour gone, Zé Miguel lays the ball off and Vaz strikes it very sweetly from the edge of the area, but his shot cannons back off the bar.

That’ll do as a warning. We revert to Heróis Original, Jaime Seidi replaces Hurley and joins Rúby in our withdrawn double pivot.

Rúby is jumping for joy now that Seidi is by his side. Unfortunately, you could describe the kind of jumping he’s doing as “At Vaz’s shins”, and “With 2 feet”. He’s already booked but he picks up a straight red anyway.

I don’t look at Rúby as he wanders towards the tunnel. I’m too busy talking Thiago up. He’s nervous, and rightfully so, but I have faith that he’ll do a job. He and Kevin replace Antunes and Ávila and our shape changes to more of a 4-2-3 with wingers.

We still have chances to further our lead after Rúby’s red. About 10 minutes later, Amonike dances past Pardal and runs through on goal, but Ascenso saves well.

Just after that, our resident penalty magnet Lassina Touré gets brought down again, this time by Machade, and Magina has a chance to bag his hat trick. This time though, his penalty is tame and not far enough into the corner, and Ascenso gets to it pretty easily.

I don’t really care, the only difference as a result of CM9 missing that 2nd penalty is that he has to buy his own ball. We picked up another win, kept another clean sheet, and built up another bit of momentum to take with us into the Promotion Stage.

Now the only team that stands in the way of out unbeaten phase is “Boring, Boring Pinhalnovense”. If it weren’t for them we might be on for a 100% record in the first phase, and I want my revenge.