Because I’m staying, we’ll need to get to know our new group: The Promotion Stage Group B.

So my decision has been made. I’m staying with Angrense. I’m pretty sure I’ve made the right decision, but of course if Borba sells Hurley and Magina in the next couple of days I’ll feel like a bit of an idiot.

Because I’m staying, we’ll need to get to know our new group: The Promotion Stage Group B. 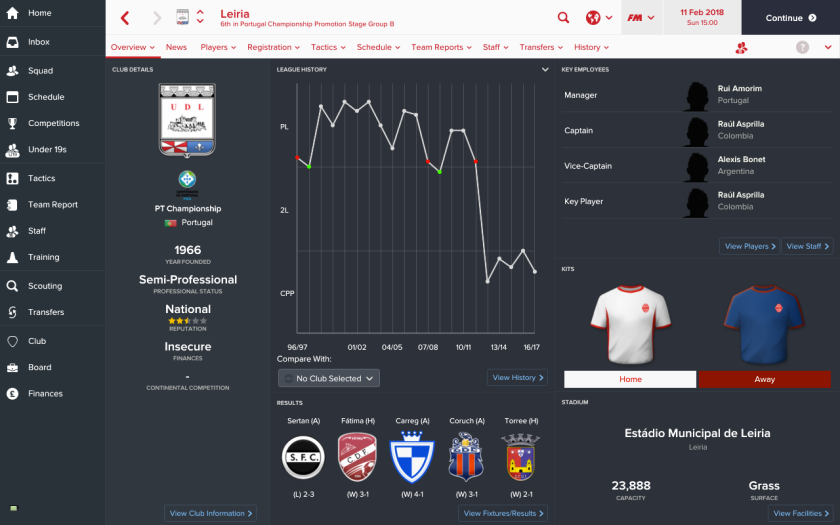 Oh, this is delicious. I have a few months left in Portugal and if I could have had my pick of any side to be put in a group with, do you know who I’d pick?

Of course you do.

Caldas are more than an opposition team for me. They’re more than a rival even. They’re a metaphor. They are my Everest. My predecessor Eduardo Almeida couldn’t beat them and they are the milestone that I set myself last year to prove that I was a worthy manager at this level. A win over Caldas would represent how far we’ve come and how far I’ve come. Last year they demolished our relegation stage group and they demolished us. But this time, to misquote Baddiel, Skinner & The Lightning Seeds, We are strong. We have grown.

Caldas are predicted to finish last in the group and we’re predicted 4th, which already speaks volumes, but I want to see the official result in black and white when we beat them. I never got to become Franjo, Who Crushed Caldas, but I still can.

Remember when I took this job I made a slapdash overview of how the leagues work? I’ll link it here so that you can get a refresher on how the promotion stage is structured.

In short, we need a top 2 finish. Anything below that means we stay in the Championship, which seriously dampens my chances of being snapped up by a bigger side. A 2nd place finish means we’ll play off against one of the Liga Pro sides for promotion, and a top place finish means we win promotion and we play off against the winner of group A to determine who wins the Championship.
Now, if you’ll excuse me, I need to go and listen to Three Lions and Three Lions ’98 on a loop for a few hours.