I’ve been looking forward to this.

I barely slept last night. I have absolutely no idea how the next few months are going to play out. The thing that I keep reassuring myself with is that we are in incredible form. But the thought that always immediately follows is that we’ve been playing against bad teams and now we’re going to be playing against good ones.

When I did finally sleep, I had that same old dream again. I walk up the gravel road towards Monte Brasil under the dark red clouds, and continue up the winding path towards Pico das Cruzinhas. Half way up, a glum looking golden retriever drags himself along behind me, before disappearing in a puff of smoke. When I reach the top, I get the same sense of foreboding that I always get, and I see the same thing that I always see.

Miguel Borba is standing at the viewpoint, at the top of the hill overlooking Angra do Heroismo, and he’s throwing my players off into the darkness one by one. I stand there, eyes wide in horror, but I’m paralysed and unable to help, or speak. When he’s thrown the last of my team into the inky abyss, he grabs me by the collar of my trusty grey coat and throws me after them. And then I’m falling. And the ground is rushing up to meet me. And I jolt awake again, sweating through my Angrense branded pyjamas.

But today is not the day to be worrying about that, today is the day of our first match. And at least we’ll start off at home. Camacha are coming to town and I decide to keep largely the same team that I used for most of the first phase. We’ll keep Project: Burnie in our back pocket for now as we’re the home side and I don’t want to start on the counter. We’ll use Project: Meatloaf as per usual.

Obviously Antunes and Batista are no longer available, so Amonike and new loan signing Domingos Quina start, and the ever reliable Jaime Seidi comes in for our suspended centre back Olivier.

Before 10 minutes have passed, Rúben leaves our crossbar shaking with a well struck free kick from just outside the area. I tell Os Heróis to abandon any ideas about controlling the match and just play our most standard game instead.

25 minutes in, we hit Camacha on the counter attack and Benjamim squares the ball for new boy Quinos, but the West Ham midfielder floats his shot over the bar when he really should’ve hit the target.

The rest of the half is tight and action-less, and our next opportunity comes when Kevin lumps the ball over the top of the Camacha defence with 10 minutes of the second half gone. Magina runs through on goal, takes aim for the top left corner, but his execution is slightly off and the ball flies just over.

Our 2 chances so far have come on the counter, so for the last half hour we set up to play exclusively on the counter. Rúby and Silva come on replacing Quina and Magina, with Rúby dropping back and allowing Hurley to take up the number 10 role.

Just a couple of minutes later, Rúby runs forward from deep and has a good crack at goal, but Jesus saves it well.

With 10 minutes to play, Renato Silva plays through Benjamim, and the box to box midfielder has a shot from inside the area, but the ball cracks off the bar. The match ends goalless.

In my book, an opening day draw is never a bad thing. A loss in your first match of any league can really put the side in a bad place mentally, but a draw, especially a draw which you were unlucky not to turn into a win, is fine. It inspires hope and optimism for the games ahead. 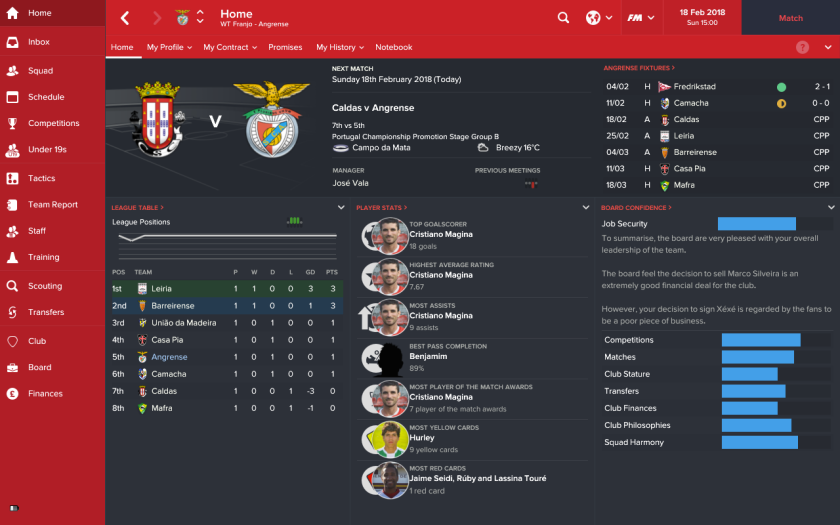 Caldas are next. I’ve been looking forward to this ever since we found out who we’d be playing against in the Promotion Stage. I reach into my back pocket, and pull out Project: Burnie.

The first half is tense and quiet, as first halfs often have been this season for us. It’s not until the 52nd minute that the first chance is carved out, when Caldas’ Cruz completes a patient passing move by passing the ball into the area for Rodrigues. The attacking midfielder slots it in to put the home side ahead.

We fail to fashion any noteworthy chances. We have a few decent shots but with 5 minutes left to play, we’re staring down the barrel of our first defeat of the season. I withdraw Arruda and bring on Renato Silva.

In the 90th minute, we win a free kick on the right. My staff, our 2 travelling fans and I watch on with silent anticipation as the Caldas fans whistle and boo. The atmosphere is hostile and I don’t know about the players, but I’m extremely nervous. We need to rise above it. We need a goal and we need it now.

Olivier steps up and curls it into the box, and Touré goes for the ball. He doesn’t get it though. He doesn’t get it because Juvenal charges in and pushes the centre back to the floor. The referee blows his whistle and points to the spot.

The whistles and boos from the home fans grow louder and louder as Cristiano Magina places the ball on the spot. He is focussed and he is confident. Our prolific striker steps up – and smashes the ball into the top left corner.

I don’t celebrate the goal. The players celebrate, as do my coaching staff, Pedro and both of the fans. But not me. I’ve failed today. I thought that a new system would freshen us up and allow us to finally clinch victory over Caldas, but it didn’t. We got let off and we keep our unbeaten run going thanks to some bad defending. It doesn’t feel good.

It’s back to the drawing board as far as Project: Burnie is concerned.