We need someone who can slot straight into the team and give us a boost.

“Franjo!” Pipes up a short, heavily tanned fellow towards the back of the room. “Diário Insular”, he continues once he sees that he has my attention. “Do you see Paulista as a direct replacement for Carlos Antunes?”

I think for a moment, before replying “Things have changed in Hero Cr… I mean, Angra do Heroismo in the last couple of months. Our priorities have changed and I thought that we needed someone who could make an instant impact. I believe Jeferson is that someone.”

It saddens me slightly to say it, but it’s the truth. The priority for me is no longer playing the long game or giving the youth of Angra a chance, the priority is short term success. We need someone who can slot straight into the team and give us a boost. We’ve drawn our first 2 matches, which isn’t awful, but I’d rather we start picking up enough wins to get promoted.

“And what about Domingos Quina? Did you not bring him in to be a first team player?” Inquires the Diário Insular reporter.

“Domingos is still in my plans,” I say firmly, “But it would be unfair of me to ask him to take up the mantle of being our main creator alone. Now we have good competition for the number 10 spot, which is never a bad thing.”

Jeferson Paulista, to state the bleeding obvious, is our newest signing. He’s yet another player that we’ve brought in from Santa Clara, after Serginho and Coelho last year, but unlike those 2 he cost us £3k and become my record signing. To be honest though, I think we’ve bagged ourselves a bargain.

Do you remember Elano at Manchester City? Jeferson reminds me quite a lot of Elano: A skilful and technically brilliant Brazillian who’s also capable of the odd screamer. He’s a true number 10 at the top of his game and he should be much more comfortable behind Magina than Hurley or Quina have been.

And while we’re talking transfers, I’ve accepted a £2k bid for Hélder Arruda from Penafiel, a Liga Pro side. He’s currently negotiating a contract with them.

Anyway, we follow up our last gasp draw away at Caldas with a trip to Leiria, and then a trip to Barreirense. It’s hardly ideal to have 3 away matches in a row but I suppose it should at least give me a couple more chances to find the winning counter attacking formula that I’ve been looking for. Leiria also present a different sort of challenge today as they play a narrow 4-3-3. I’m not sure off the top of my head how many times I’ve played against teams in this formation, but all it reminds me of nowadays is Husqvarna. And relegation. And unemployment.

I resist the urge to have a traumatic flashback and go about setting my side up in a tweaked version of our Heróis Original system. We’ll focus our play down the wings like we sometimes do with Project: Meatloaf, we’ll play on the counter and we’ll play slightly narrower in the hopes that we’ll deny Leiria space to play in the middle. We’ll also have Coelho come into the side, using his attacking prowess to overlap Kevin on the left. Jaime Seidi comes in for Arruda to fill the holding man role and Hurley keeps his place behind Magina. My new number 16 is ready and waiting on the bench though.

Also, we’re on the brink of an Angrense record for number of wins in a season. So far we’ve won 15 matches, the record as it stands is 17.

Azevedo picks up a damaged shoulder early in the match. This isn’t ideal, as I never have keepers on the bench, but luckily it’s just a knock and he plays on.

It’s Leiria who start the game well: Bernardo crosses to the near post after 5 minutes and Allef cracks the ball off the woodwork. A couple of minutes later, our corner is half cleared and Seidi squares it for hurley on the edge of the area, but his shot is straight at Leiria’s keeper, Bonet.

A few minutes after that chance though, we break the deadlock. Amonike’s cross from the byline deflects through to Benjamim. His shot is saved well by Bonet but Magina is on hand to boot the ball in on the rebound.

We still don’t stop coming forward, another minute or so passes before Amonike chips the ball into the near post and Magina rifles in his and our second. We seem content after that to take our foot off the pedal and aside from a booking for Miranda just before half time, we play out 60 extremely quiet minutes.

I bring on Paulista for his debut, replacing Hurley in the Brazilian’s favoured number 10 role, but with about 15 minutes to play, Leiria go close twice when Asprilla’s shot is charged down by Touré, and from the resulting corner, João Almeida boots the ball just over.

To see out the last 10 minutes I drop us back to a deep 4-2-3-1, with 2 holding men and 3 across midfield. Rúby comes on for Kevin and joins Seidi in front of the defence, and Paulista heads out to the left wing where he’s also pretty comfortable.

Before you could say “Don’t fuck this up” though, Miranda picks up one of his patented meaningless red cards after a second yellow, but Serpa replaces Benjamim and moves to right back and we see the game out with some degree of comfort.

The win is a massive relief. We were good value for it and we’ve now got 5 points from 3 matches, which is probably about as good a start as we could have hoped for.

So, despite the fact that our next match is another away one, it’s Barreirense. I think if we want to have any hope of making the top 2 we need to win both matches against Barreirense. Having said that, Azevedo will be out for 2 weeks with his shoulder, despite the fact that he struggled through the Leiria match, keeping a clean sheet in the process. Miranda also misses out having received an automatic 1 match ban for his red card, and Benjamim makes up our missing trio when he picks up the mother of all stubbed toes in training, which will keep him out for an entire week. In other news, although Magina has been on 9 assists for what seems like the entire season, he’s now been joined on that tally by Amonike, so both of them are only 1 away from equalling Medeiros’ record.

They’ll both get the chance to pull level today as they’ll both unsurprisingly start. Serginho and Serpa come in as like-for-like replacements for Azevedo and Miranda, and Hurley drops back into Benjamim’s central spot as an attacking central midfielder. This leaves a space behind Magina, so Jeferson Paulista starts for his full debut.

Sometimes the Gods of football are completely and unapologetically shit. You know what I’m talking about. That time that the team you support hit the bar 3 times and lost 1-0. That time that your club’s new signing broke his leg in his first training session. That time when your club got knocked out of the Cup Semi Final by a goal that shouldn’t have stood.

But sometimes, just sometimes, the Gods of football are on your side. And when they are… It’s just the fucking best.

8 minutes into our mach in Barreiro, we win a free kick in a central position, right outside the penalty area. Jeferson Paulista steps up on his full debut – And strikes it perfectly. It fizzes over the wall and so far into the top corner that I momentarily wondered whether it was possible for the ball to get stuck between the post and crossbar.

I am ecstatic. So ecstatic in fact that I try to awkwardly belly bounce Pedro for the first and probably last time. God I needed that goal. My passion to manage this club certainly didn’t disappear after Borba’s transfer hijinks but it definitely took a knock. I needed a moment like that to remind me what it’s all about. I asked for an instant impact from my new number 10 and an instant impact is what he’s had. And in case I wasn’t clear, what a bloody goal.

Alas, the feel-good atmosphere is short lived. Almost 5 minutes later, Felix’s powerful drive is tipped onto the post by Serginho, and Severino reacts quickly to get to the loose ball, before driving it low into the far corner of the net. Shortly afterwards, Severino plays a pass behind our defence, giving Caraballo a golden opportunity to give the home side the lead, but he shoots straight at Serginho from 8 yards out.

Under a minute later, Magina does the same for Hurley, playing a good pass in front of him in the penalty box, but his shot is saved well by Elói’s outstretched hand.

It all goes a bit quiet until shortly after the break. Barreirense’s corner is cleared by Paulista and we counter quickly. Amonike gets the ball on the right and plays it inside to Hurley, who squares the ball to Kevin in acres of space. Kevin unselfishly knocks the ball forward a few yards so that Magina can blast the ball into the back of the net, giving us the lead. To be honest though, from where I was sitting he was definitely offside.

Barreirense come back at us with the kitchen sink, forcing me to bring back our nice withdrawn 4-2-3-1. Rúby replaces Kevin to once again form the holding man partnership with Seidi, but the chances keep coming for the home team. Breimyr drives forward and shoots just wide and Altaír Júnior rifles the ball against the post with 15 minutes to play. I try to make us more solid, more narrow and less inclined to close the ball down and open space for Barreirense. Silva comes on for a late cameo, and in the 91st minute, Severino too smashes a low shot against the post.

Oh, and how’s this for an instant impact? I like this guy. 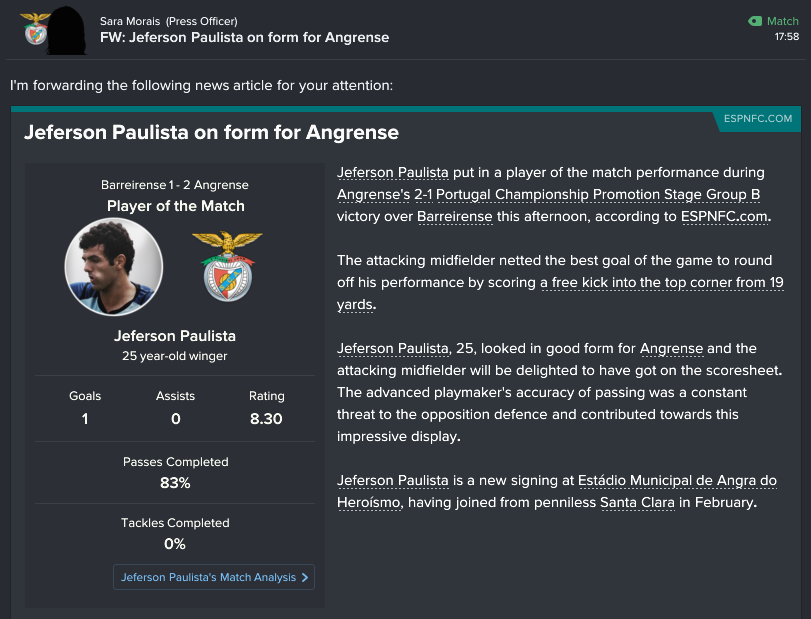