“Why should we hire you, Franjo?” 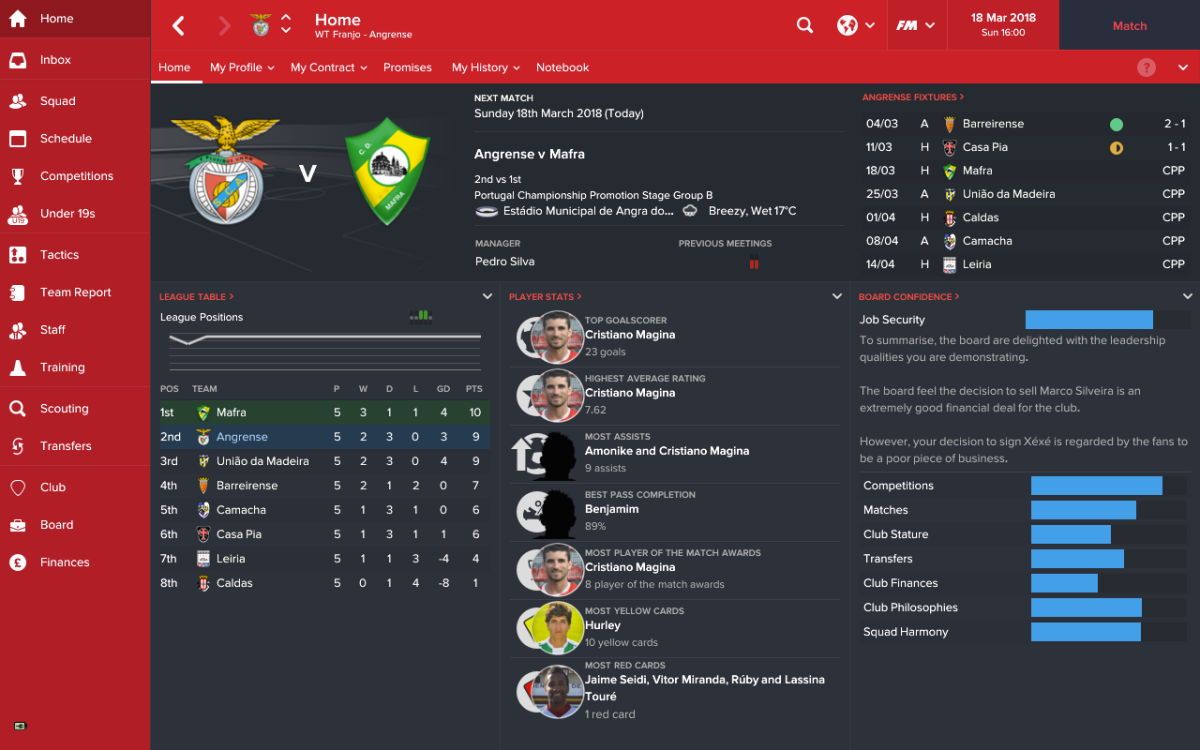 “Why should we hire you, Franjo?” Asks Gian Carelse. I was expecting this question, of course I was. Who doesn’t expect this question in a job interview?

“Well,” I begin, “In the past 15 months I’ve transformed my Angrense side from a Championship Relegation Stage side into a team that are currently 1 point off the automatic promotion spot. I’ve spent under £10k, I’ve brought players through from the academy, some of which have been…” I shift uncomfortably in my seat. “…Sold on for club record fees. We’re unbeaten in 25 league matches and I think that I can bring similar success to your club” I conclude. My morning rehearsals paid off. I sound very impressive.

Gian’s expression doesn’t change. He continues to look at me coldly, almost like he’s studying me. “You only have 18 months experince…”

“I know! Imagine how good I’ll be in a few years!” I joke. I realise almost immediately that I have made the wrong decision.

“…And you have already experienced relegation” As Gian finishes his sentence I feel myself turn red. I begin to flail.

“The Black Leopards are currently in danger of relegation. Do you really consider yourself well equipped to save us?”

It’s a good question. Do I? Although Angrense were in the Relegation Stage when I arrived the quality in the squad meant that relegation was never a real concern. I’ve only had one shot at a survival race and I blew it. Höllviken is going to haunt me forever.

The Black Leopards, by the way, are a South African 2nd tier club that are currently 13th out of 16 clubs, and as Gian said they are in real danger of relegation. I applied for the vacant Manager’s position for a number of reasons, but mainly because I think they have the best name out of any football club. And to a lesser extent, I’d quite like to try my hand outside Europe. 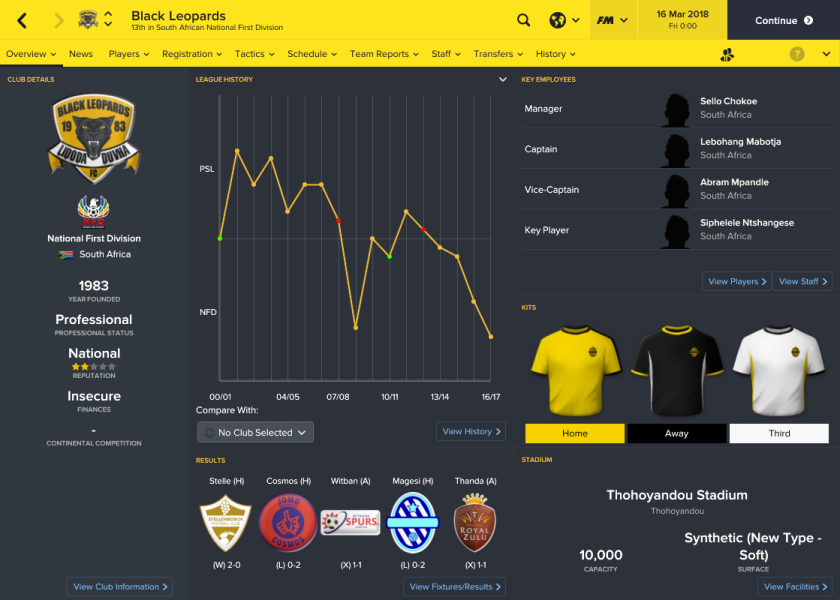 The interview hasn’t gone as I had hoped though. I told Gian that I wouldn’t be able to join at the minute due to my hopes of Promotion for Angrense. I said that I’d be available at the end of the season. The Black Leopards’ Chairman, for whatever reason, didn’t take kindly to that. I suppose he wants a manager that’s able to join in time to prevent their relegation, which is probably fair. I don’t have high hopes that I’ll get the job. 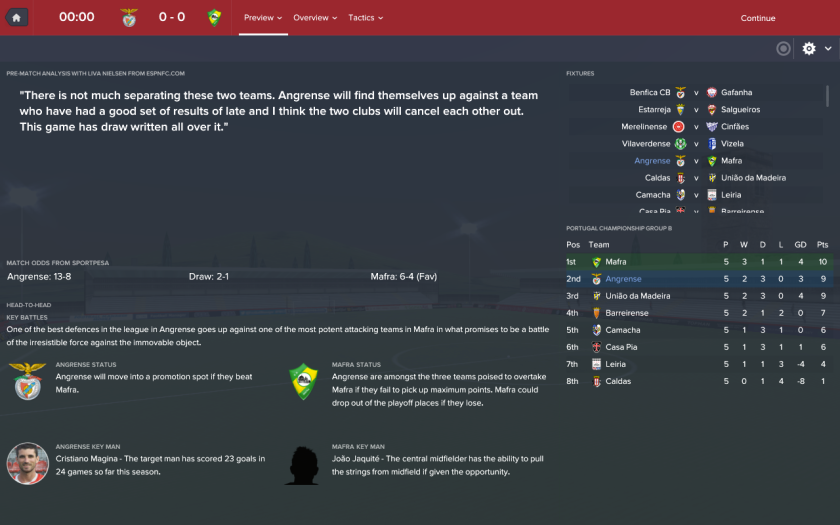 Anyway, let’s fast forward a few days and focus on the matter in hand. I still have a top 2 finish to secure and our next 2 matches will be very big ones indeed. We play Mafra today, the League leaders, and then União da Madeira next week, who are almost certainly going to be in the mix for the top 2.

More records are waiting to be broken today too: Magina’s now 3 goals away from a Championship record, a win today would be a new Club record, and avoiding defeat would make this a record unbeaten run in the Championship. No pressure though, eh?

I’ll be making a few changes for today’s game. Délcio Azevedo’s shoulder has mended so he’ll come back into the first team, along with Mauro Aires and Domingos Quina. I almost forgot about the West Ham man since Jeferson Paulista arrived, but Kevin’s been quiet lately so he’ll be dropped to the bench, Paulista will play on the left, and Quina can have another crack at the number 10 spot. 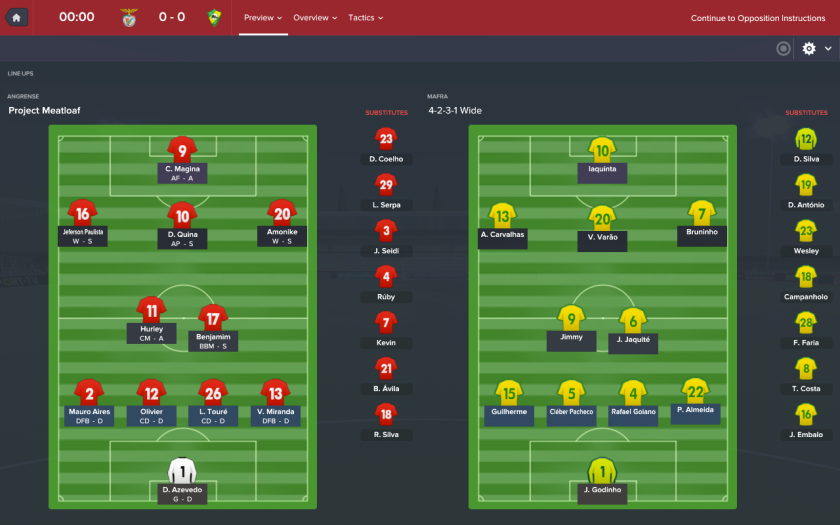 Magina bruises his thigh in the opening minutes, which is not at all ideal. This is a big match and we really need to be firing on all cylinders.

Within quarter of an hour, Varão has a close range shot saved by Azevedo and Jimmy rattles the post with a drive from 20 yards, as the pessimism continues to be poured onto the occasion. We disband plans to control the game and retreat to a more standard mentality.

That does the trick, sort of. The next thing I know, an hour has passed and I’m bringing Kevin on for the ineffective Quina.

With 20 minutes to play, Amonike floats in a cross from our corner, Rafael Golano heads the ball away, but it falls perfectly for Jeferson Paulista, who crashes a half volley in at the near post. My jaw drops as I watch it happen. We really are unstoppable.

Not keen to let the lead slip, I swap us to a counter attacking 4-1-2-3 system, bringing Seidi on for Magina and shoving Kevin up front for possibly the first time so that the big man can rest his bruised thigh.

With full time approaching, Rúby comes on for Benjamim and we go to our trusty withdrawn 4-2-3-1. We see the match out, and in doing so, write ourselves into Angrense and Portuguese Championship history. We are unbeaten in 26 league games and we’ve won 18 times in the division this season. Vamos bloody Heróis. 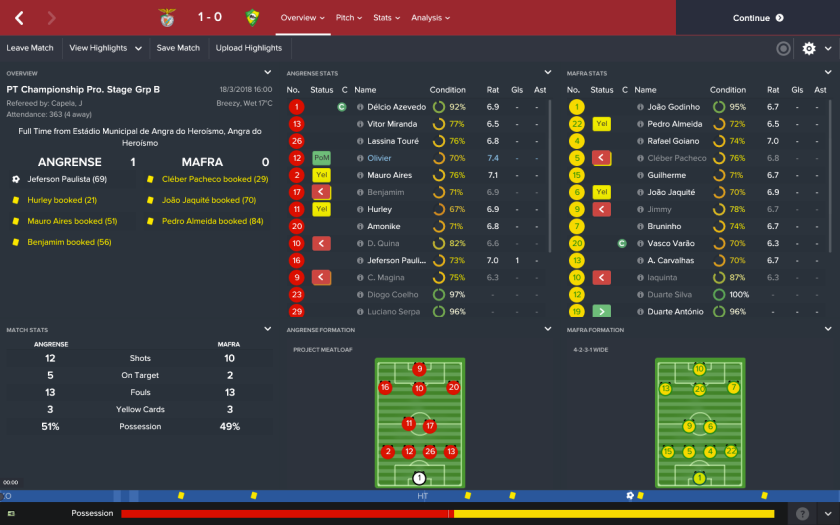 Magina misses training for a few days but he’s back in plenty of time for our next match.

Miguel Borba calls me during the week and asks if I’d like to open contract talks, but I politely decline before hanging up and insulting the shit out of him. Unfortunately, Gian Carelse calls just minutes later, to give me the bad news. I won’t have the enviable title of Black Leopards Manager next season. My search for a new club continues. 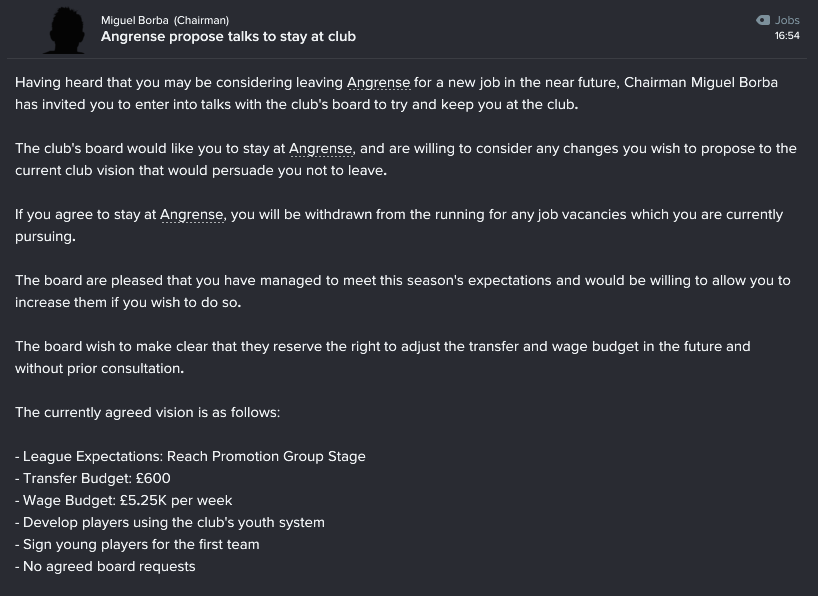 I think I’ll just leave the job hunt for now. I’ll finish the season here and then start applying again. Nobody’s going to want to hire me if I can’t join instantly anyway. Anyone that might want me at the minute will most likely be stuck in a relegation scrap and will want their manager in pronto. 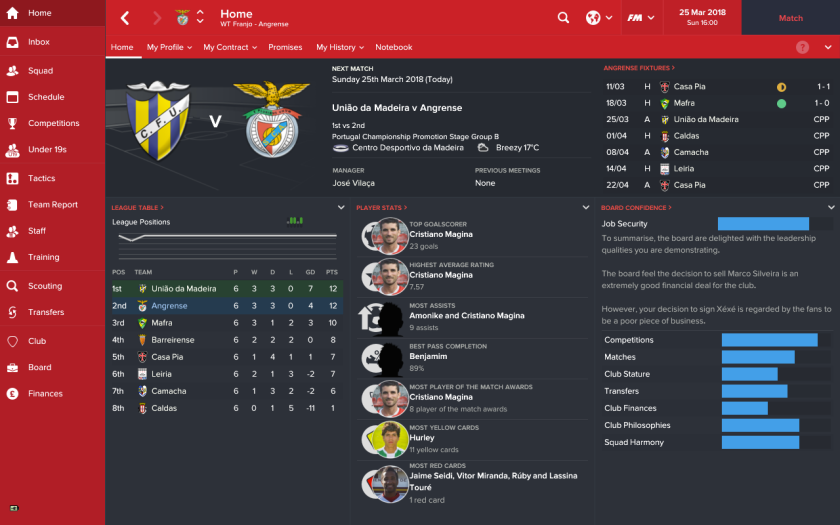 The rejection of a South African minnow with a really cool name is not the only annoying thing that’s happened either. União have climbed above us in the League, despite us sitting in 2nd and beating 1st place Mafra. So now we’re still in 2nd behind União. I suppose we just have to do to them exactly what we did to Mafra. We’ll play on our new counter attacking Heróis Original system, which I may or may not rename to something more apt at some point. Hurley is suspended after picking up his 10th yellow against Mafra, but thank fuck for Portuguese league rules, it’s still only a 1 match ban. Kevin also comes back in for Quina as my experiment last week fell flat on its face. 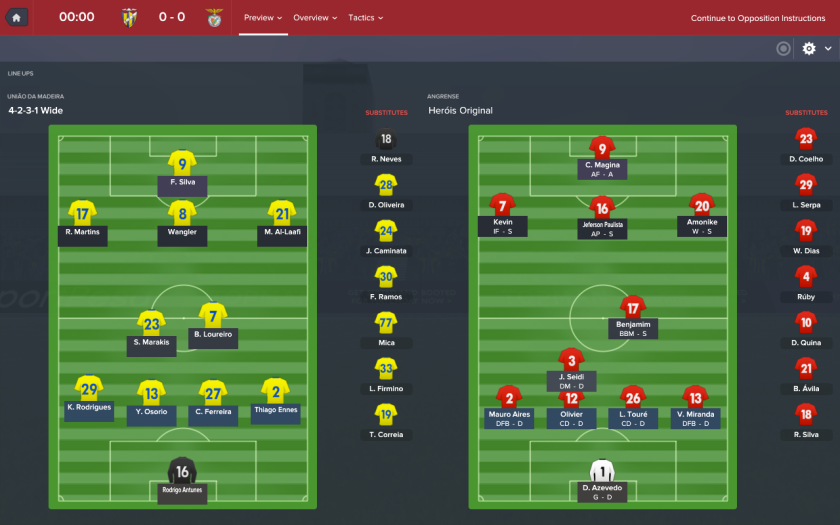 Our title challenge takes a knock instantly. With under a minute gone in the match, Olivier trips Wangler in the box. It could be the start of a horrific 90 minutes, but Flávio Silva’s powerful penalty is well saved by Vitor Azevedo. We breathe a huge sigh of relief.

And within 5 minutes, the tables are completely turned on União. After such a promising first minute, the breakthrough goes to us. Kevin breaks down the right wing and drills it in towards the near post, where Amonike arrives to tuck the ball into the net.

About 15 minutes later it’s all square again when Wangler’s free kick deflects off Benjamim in the wall and sends Azevedo the wrong way, but within another minute Benjamim’s shot deflects through to the far post, and Magina gets there the fastest to put us back into the lead. It’s been a breathless opening 25 minutes.

The next 25 minutes are not so breathless. Half time comes and goes without incident, and it’s not until the 53rd minute that Magina squares the ball to Benjamim in front of an empty net. It’s an opportunity that our midfielder doesn’t waste and he puts us 3-1 up.

I take the opportunity to thank our lucky stars, and then retreat to the relative safety that I keep finding in our withdrawn 4-2-3-1. We go all out defence.

Kévin Rodrigues’ 2nd yellow for a trip on Amonike makes União’s day go from bad to worse, and helps us to secure our precious, precious points. 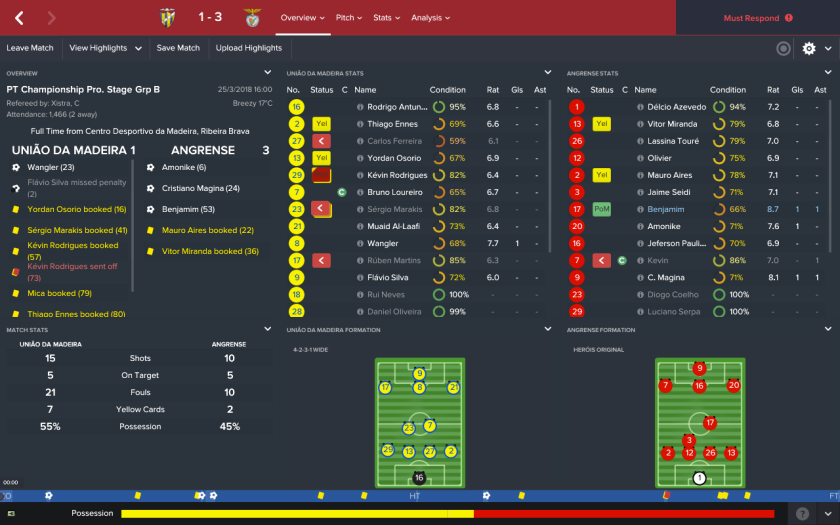 The last 8 days could not have gone better. We’ve picked up 6 points against 2 teams who were at the top of the Championship Promotion Stage Group B, and we now find ourselves back at the top and 2 points clear. Roll on April.

One thought on “Interview (Franjo: A Journeyman Story – Ep44)”