After discovering that pacing isn’t really helping, I sit back down at my desk, interlocking my fingers in front of my mouth. I stare down at the 6 pieces of paper laid in front of me. Shortly after arriving in Poland, I put the word out that I would be looking for a new Assistant Manager, and 6 eager applicants have thrown their names into the ring. I have no idea which one to choose. And the really interesting thing, the thing that makes me realise what a drastic step up I’ve made in taking this job, is that I’ve heard of them. I’ve heard of all of them. And although I respected most of them as footballers, I remain unconvinced with their non-playing prospects.

Option number 1 is everybody’s favourite dreadlocked, goggle wearing Dutch maestro, Edgar Davids. Now, I had a great deal of respect for Edgar when he was playing, and I respected his decision to drop down the English ladder to try to start a Managerial career at Barnet, but… I heard things about Davids’ stint down there. Things like he wouldn’t attend matches that required him to spend the night in a hotel. Things like when he was Player-Manager, he (As a central midfielder) took the number 1 shirt in order to try and “Start a trend”. I need to find someone who’s 100% committed to being my second in command, and I need someone who doesn’t arse about. Davids is out.

Could that someone be Peter Enckelman instead? A Finnish former reserve goalkeeper who most notably “played” for the likes of Aston Villa and Cardiff City? A solid pair of hands he may be, but I feel slightly uneasy about my right hand man having amassed only 150 appearances over a 20 year playing career. Where’s your ambition, Peter? No, I don’t think so.

Next up we have Brede Hangeland, of Fulham fame. Now here’s a man who I’m fairly sure has the commitment, bravery, and brick-shithouseness required to run through walls for his employers. In another life I might’ve hired him, but I would like somebody with a little more experience than he currently has. Sorry Brede.

Number 5 is Paul Konchesky, the journeyman left back who represented some decent teams like Charlton and Leicester, but I’m not entirely comfortable with the idea of him either. I have no doubt that he’d try his best and if I was looking for a coach I might’ve given him a shot, but an assistant manager? I don’t see it. 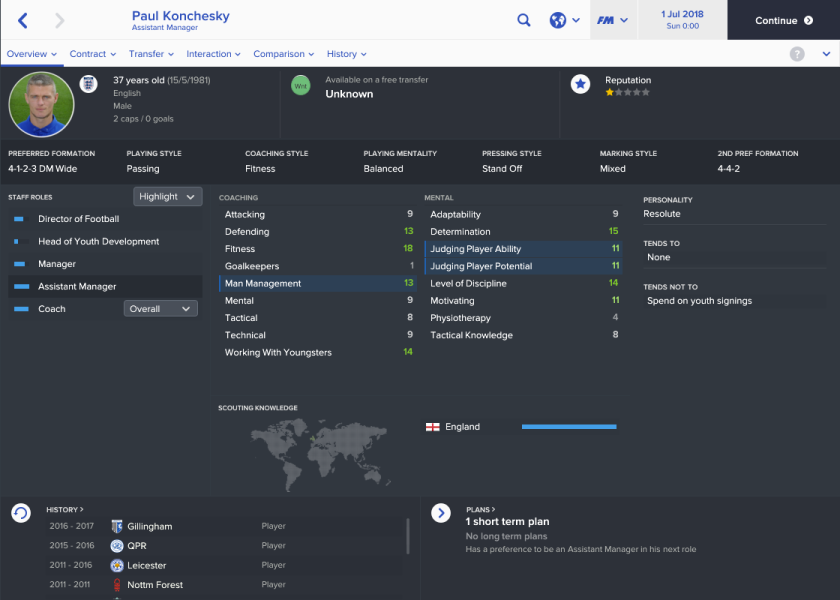 Finally, option number 6 is John Arne Riise. Another left back, and another former Fulham player. If I wanted to hire someone to play on my behalf in some sort of free-kick-off, then absolutely I’d hire him. The man had one of the most vicious left foots that I’ve ever seen. But an assistant manager? Again, he doesn’t really have any experience to speak of and I’d like someone more qualified. It’s a no for Riise.

So, I think as I place the final application on the “No” pile, Out of 6 candidates, I… I don’t really want any of them. Where does that leave me? It leaves me grabbing the application forms and heading down to Radzinski’s for a drink.

As I walk through the door into my new and extremely local watering hole, I see something unexpected. I see another Patron at the bar, nursing a beer. I knew that bastard Radzinski had beer. Beer man turns towards the sound of the creaking door and sees me, and I see him. And I recognise him. I’m not sure why, but I definitely recognise him.

As I sit at the bar, Radzinski appears behind it, and after a bit of an argument he begrudgingly pours me a beer. I start talking to beer man, only to find out that he’s Dennis Lawrence, former Swansea player and Wigan and Everton Coach. He most recently had a poor spell as Trinidad and Tobago Manager. He’s been in the country for an interview and has wound up drowning his sorrows right below my new flat. That’s got to be a sign, right?

“Look”, I begin, as I sway slightly on my stool, “I need an assistant. Come work for me. I need someone with your experience.” Dennis delightedly accepts and I hire him on the spot. And I wasn’t lying, he really does tick all the boxes for me: He’s a good coach, he has experience in good quality leagues, albeit under a poor quality manager, and he has international experience as both a player and Manager. In short, he has everything that I’m missing. Plus he doesn’t have that unsettling “Wildcard” characteristic that Davids and Riise do.

I ceremoniously burn the 6 application forms right there on the bar, prompting Radzinski’s lip to curl with disdain once again, but it’s not like this place can get any more beaten up, is it? Mind you, these sudden acts of reckless spontaneity could just be the effect that 2 pints of Polish beer has on normal unsuspecting lightweights like me.

Either way, with my number 2 in position, I think I’m ready to meet my squad.