We need to rack up all the points we can. 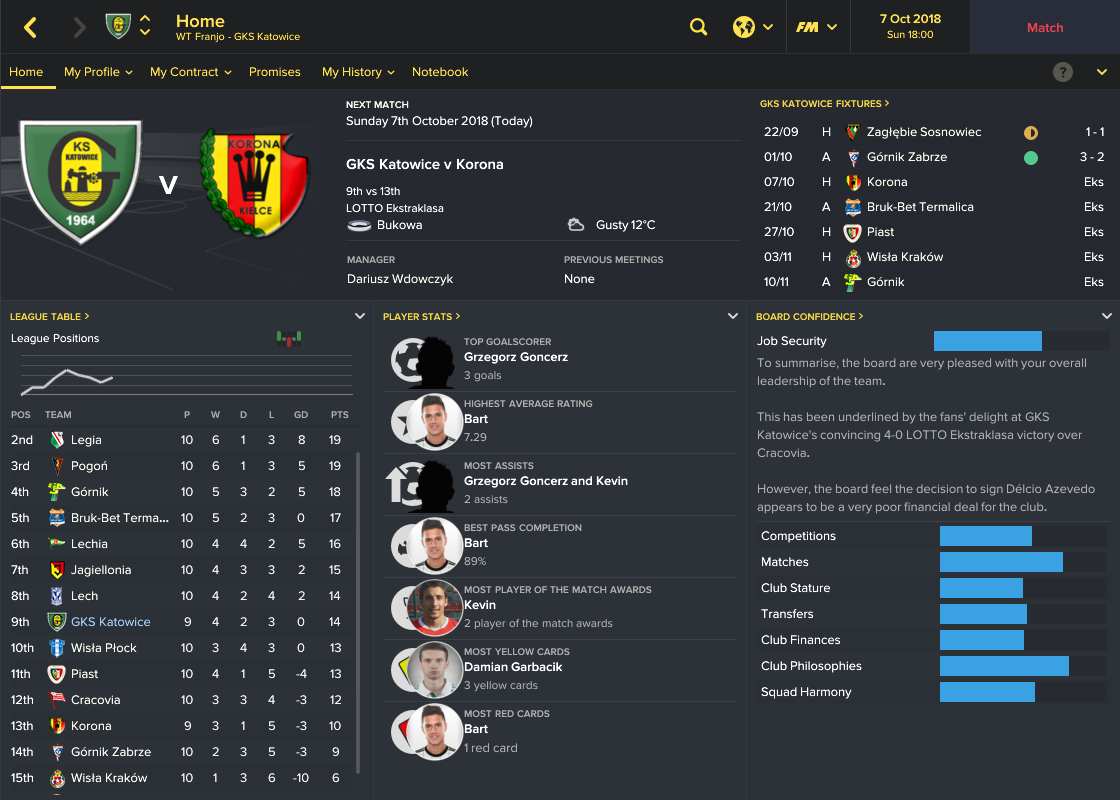 The league table is starting to get extremely congested in the middle. We’re in 9th place on 14 points, a respectable tally. We could well climb above Bruk-Bet Termalica to 4th if we win our game in hand, which would be incredible, but we’re also only 2 points clear of 12th placed Cracovia, and only 4 clear of today’s opponents Korona Kielce, who are in 13th. My point is that we could climb or fall very very quickly in the next few matches, and we need to rack up all the points we can.

I’ll be making a few changes for the Korona game. I’m going to do something I never thought I’d do, and drop Olivier. It’s nothing against him, but I want to see if there’s anything to be gained by having an all-Scottish centre back pairing of Hutton and Wilson. I also bring in Fossy and Janga for Gregurina and Amonike. We’re at home and we’re going 4-2-3-1.

It doesn’t even take Cebula 5 minutes to unlock our defence with a through ball. Klups takes the ball and places it well into the far corner and we’re behind already. In the 12th minute things threaten to go from bad to worse when Klups dinks a free kick in from the left wing, but Arak’s near post header comes back off the angle.

Just after the half hour mark though, we’re put in our place. Klups crosses in again, this time from open play on the right wing, and Arak heads this one in. Changes must be made. I tell GieKSa to go control the tie and I tell Hurley individually to change from his deep lying quarterback role to his preferred attacking central midfield role.

As half time looms, my players start to push back. Fossy plays a direct ball to Goncerz on the edge of the area, and the brilliant bastard lobs the onrushing keeper to pull one back a couple of minutes before the break.

I encourage the lads at half time, sensing that spirit might be just enough to get a result today. It nearly pays off quickly. Fossy chips another ball to Goncerz and he shoots towards the near post, but Gostomski flings out his big gloved paw and bats the ball behind.

We go attacking, we go route one, I even throw Wilson up front as a makeshift target man towards the end, but apart from a Zubrowski shot that Nowak saves, the second half is drab and actionless. 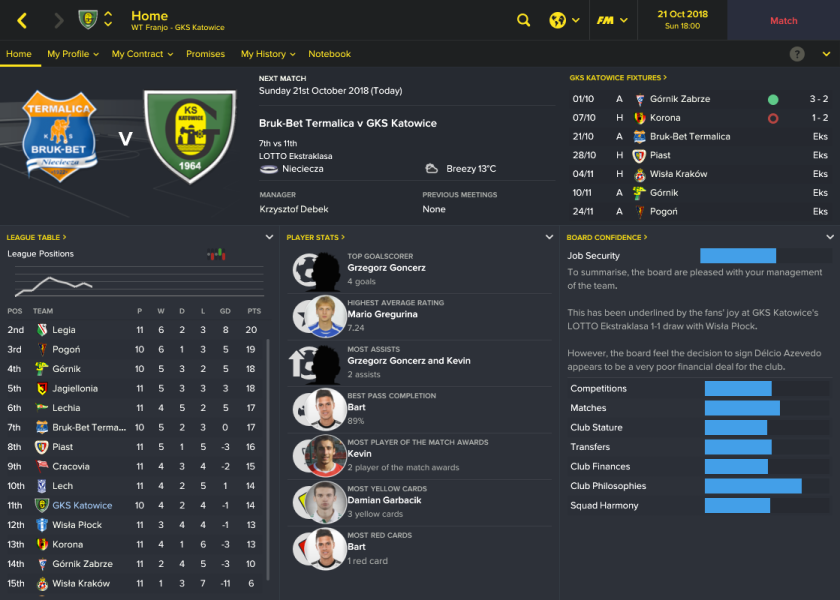 In the spirit of not taking dropped points too hard, that was not the worst match I’ve seen. We were OK, but that first half hour when Korona played out of their skins killed us. Also, Goncerz was named in team of the week! His chipped goal was doing the rounds on social media too.

And also, remember in the final days of SC Angrense when I convinced Borba to pay for my National C license? I’ve kept it all a bit hush hush for the most part, but I just completed the course. I’m not sure if this is a good thing to announce 2 years into a Managerial career, but I finally have a professional coaching qualification!

OK, so let’s pick ourselves up and go again. Bruk-Bet Termalica away promises to be a tough game. We’re 11th and still only 3 points behind them in 7th, but they’ve won their last 4 games by a single goal and we’ve now picked up 1 win in our last 5 matches.

Olivier comes back in to partner Wilson at the expense of Alan Hutton, as we’ve picked up 4 points in the 2 games that those 2 have played together. I’m also trying something a little different going forward. Amonike plays on the right, Kevin on the left, and Janga in between them as an attacking midfielder. I’m sacrificing Fossy’s playmaking role in the hopes that Janga can link up with Goncerz and get some runs in behind the defence. Goncerz seems to really like holding the ball up and playing others in, so let’s lean into it.

We start off OK, but neither side is able to fashion any chances of quality. By time the first real chance comes for either team, there’s only 10 minutes to play before the break. Janga has the ball, he flicks it skilfully to Kevin and sets off sprinting into the box. Kevin finds him to complete the one-two, and Janga stabs the ball home for his first GieKSa goal. As I watch him peel away towards the travelling fans, I feel something soft and warm on my shoulders. The feeling wraps itself around my torso and arms, and then my entire body: Swaddling me from head to toe. It’s my Vindication Blanket. Hello, old friend.

We go on the counter attack after that, hoping that the trailing home side come out at us and leave gaps that we can exploit on the break.

5 minutes before half time, we have bodies forward following a free kick. Olivier lays the ball off for Garbacik and he rifles it in for 2-0.

Bruk-Bet come out swinging for the second half, though. Holownia swings in a perfect cross from the left wing, right in that awkward spot between defence and goalkeeper. Kiepura launches himself forwards to reach it and heads it home. I have to applaud that one, it was an all-round great goal.

About 10 minutes later, Gergel swings a corner in for Bruk-Bet. We’re right on the back foot so far since the break. Putivtsev gets his head to the ball and powers a header at goal. It’s going just wide until Hadascok glances it into the net. All square once more.

The game dies off once again. We bring on Kwarko and Tarnowski for Amonike and Goncerz, but can’t find the winner. I’ll take a draw there. It’s always disappointing to lose a 2 goal lead, but both sides deserved a point in the end.

On the other hand, that’s now 1 win from 6. 6 points from a possible 18. The league table is still congested in the middle, and we could find ourselves slipping further and further down towards the relegation spots unless we start to turn some of these draws into wins. It feels like we just need that extra 10%, to finish our chances and to stop the sloppy mistakes. I feel like I’m getting to know this squad well though. I’m getting to know their character and their ability. They’ll turn this around. I know they will.