“What did Święty Mikołaj bring you, Alan?” I call.

“What did you get for Christmas?”

“Right, well pay it forward, you lazy bastard! Give me 100%!” I’d been waiting for someone to ask to stop. I really wanted to use that line.

The lads are currently running cross country as a part of my winter high fitness training schedule, which should help carry us through until the end of the season. What certainly won’t help is all of the bloody useless friendlies against weaker opposition that we’ve got lined up.

Janga won’t be joining us for at least a month after straining his knee ligaments in the Legia match. He could be out for as many as 7 weeks, but other than that we’re all looking good. 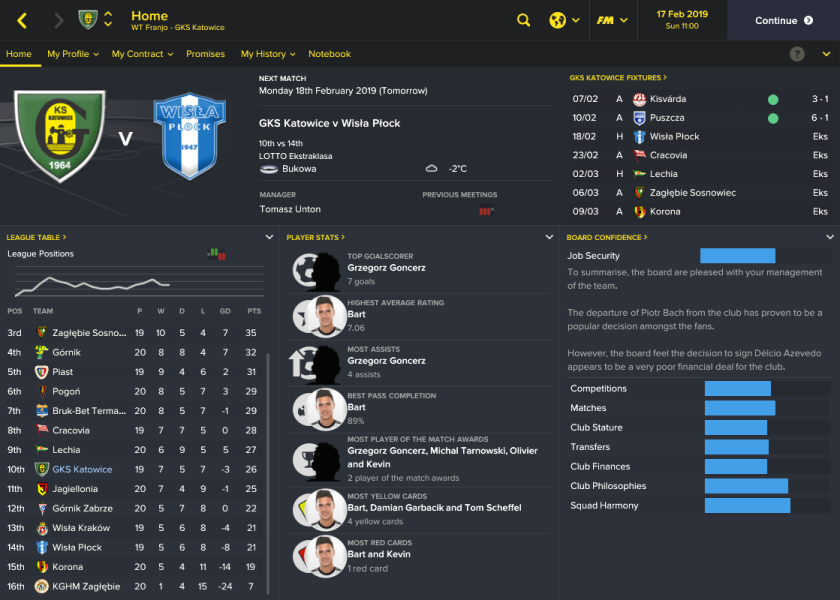 This has been my 1st winter break. As a player, a fan, or a manager. I’ve got to say, I’m not a fan. Maybe it’s just that we’ve not done it properly. Maybe we should have arranged some kind of warm weather training camp, played a few top clubs to test ourselves, and that kind of thing. As it stands we’ve barely trained because we’ve had shit friendlies almost every other day. (I’ve realised that at some point I must have given responsibility for organising friendlies to Dennis for whatever reason, but I’ve made it abundantly clear that I’ll be arranging them in future). In short, it feels like we’ve just stagnated. We’ve had a massive amount of disruptive, small, niggling injuries throughout the squad but nothing serious. It’s just been quite a frustrating couple of months.

Sebastien Nowak tells me not long after the Legia match that he’s hanging up his boots at the end of the Season. I try to convince our vice-captain to reconsider, but his mind’s made up. He’s had a good career and I’ll try and get him to stay on as a coach, but we’ll deal with that at the end of the season.

I also have quite a few conversations with Carmine Gautieri, Manager of Verona, as his club once again pepper me with offers for Kamil Karwot, our promising left winger. They start with an insulting bid that could rise to just under £80k and I reject it without hesitation. They make another, slightly better bid, and as much as I try to negotiate, they never get close to my asking price. Their 3rd bid is accepted – By Wojciech Cygan, our Chairman. It could rise to £275k, but as I may have already mentioned, Chairmen who go over my head with transfers can fuck right off. I talk him into backing down. Their persistence eventually wears me down though and I negotiate the same deal I give all of the clubs that come around trying to poach our young players: £500k and 50% of his next fee. We finally agree a deal. Days later though, Karwot turns down the chance to join Verona and instead signs a contract extension, because he’s a bloody good lad. The Verona saga is finally over. Until the Summer, I’m guessing. 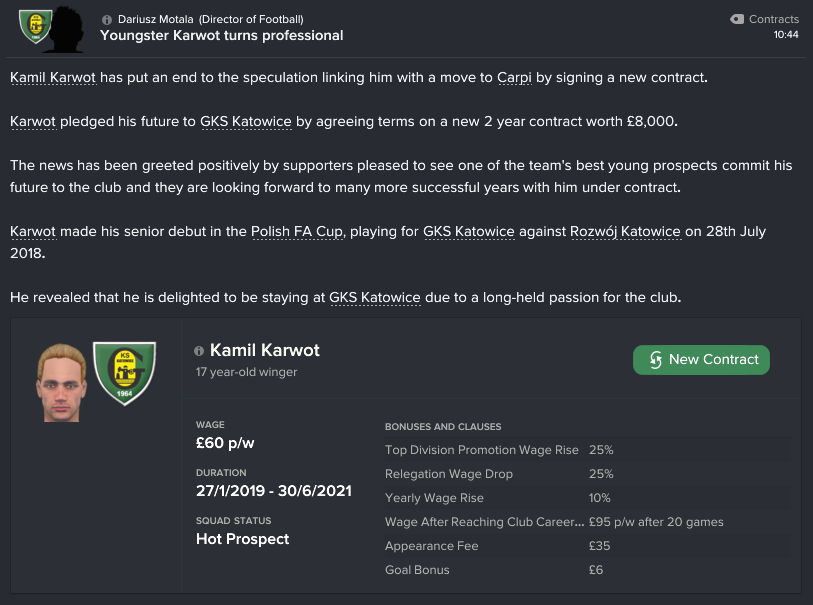 And then there’s the small matter of these friendlies that I’ve been bleating on about for so long. We win most of them, but I don’t learn anything. We don’t test ourselves. We don’t get anything out of them aside from match sharpness and that’s very frustrating. 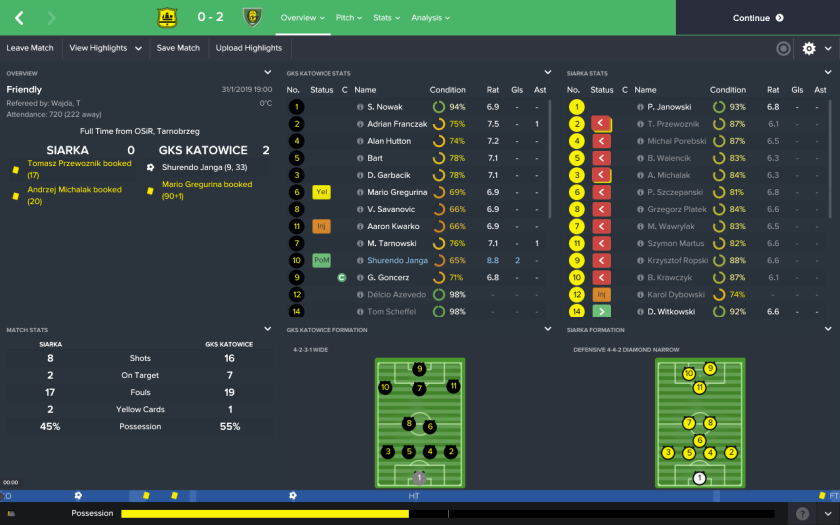 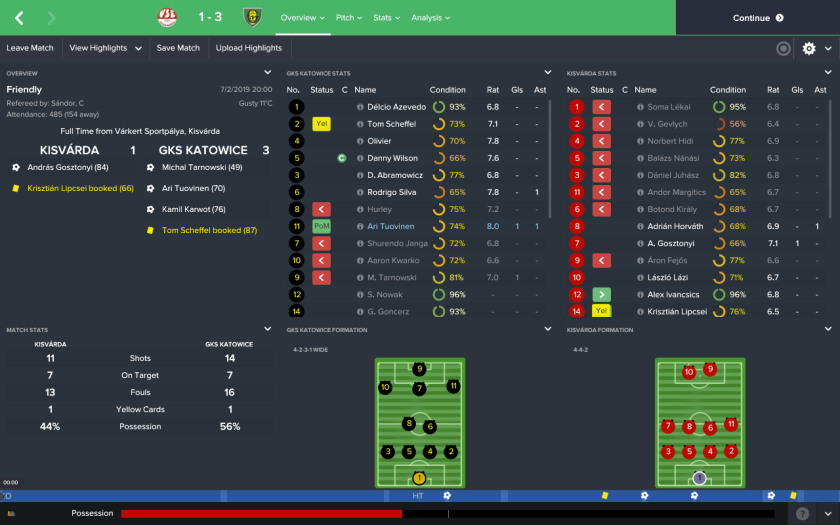 One of the most curious stories that pops up in Polish newspapers over the break is the one linking me with the vacant Wisła Płock job. When asked, I quickly distance myself from the story.

As we enter February, the transfer window opens, allowing promising winger Ari Tuovinen to finally complete his transfer from PKKU.

We don’t have the finances to do any more business, but I do allow Pawel Mandrysz to join Bruk-Bet on loan until the end of the season. It makes me feel slightly uneasy that a better club want him when I don’t, but he’s young and maybe some much needed game time will show me what he’s made of. 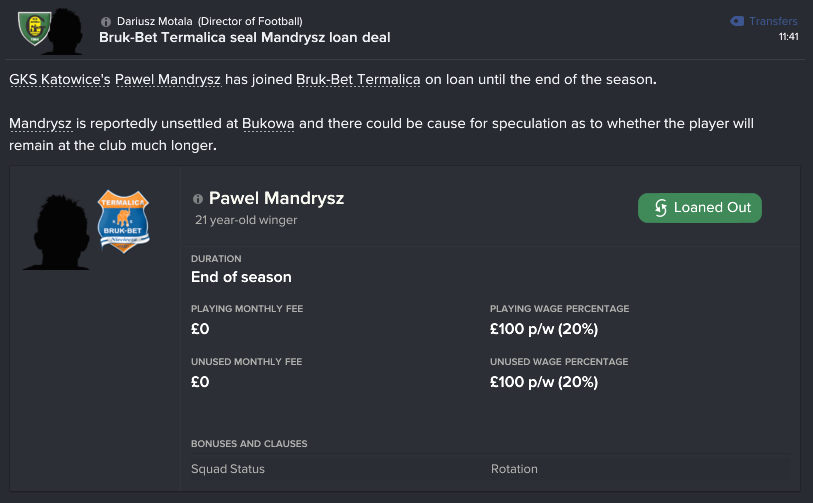 Stjepan Geng also wants to leave, and I have absolutely no objections to him doing so. He’s nice to have as a versatile backup, but I’ve barely needed him. I put him on the transfer list.

The final piece of “transfer” news is that Jakub Wilk decides that he’ll retire in June. In all honesty I had tried to release him from his contract just days before his decision, so I won’t lose any sleep over it. He strikes me as a player who never quite fulfilled his potential, and at this point he’s past the point of being able to do so.

As our match against Wisła Płock draws closer, Maciej Machalski and Rodrigo Silva both rule themselves out for 5-6 weeks and 3-4 weeks respectively through injury, but I doubt that either of them would’ve started anyway. We’ve got to put our best foot forward if we’re going to reach the top 8 by the end of the League stage. We’ll be going full strength. We’ll be fighting tooth and nail. I just hope it’ll be enough.