Nobody’s place is safe in my squad. 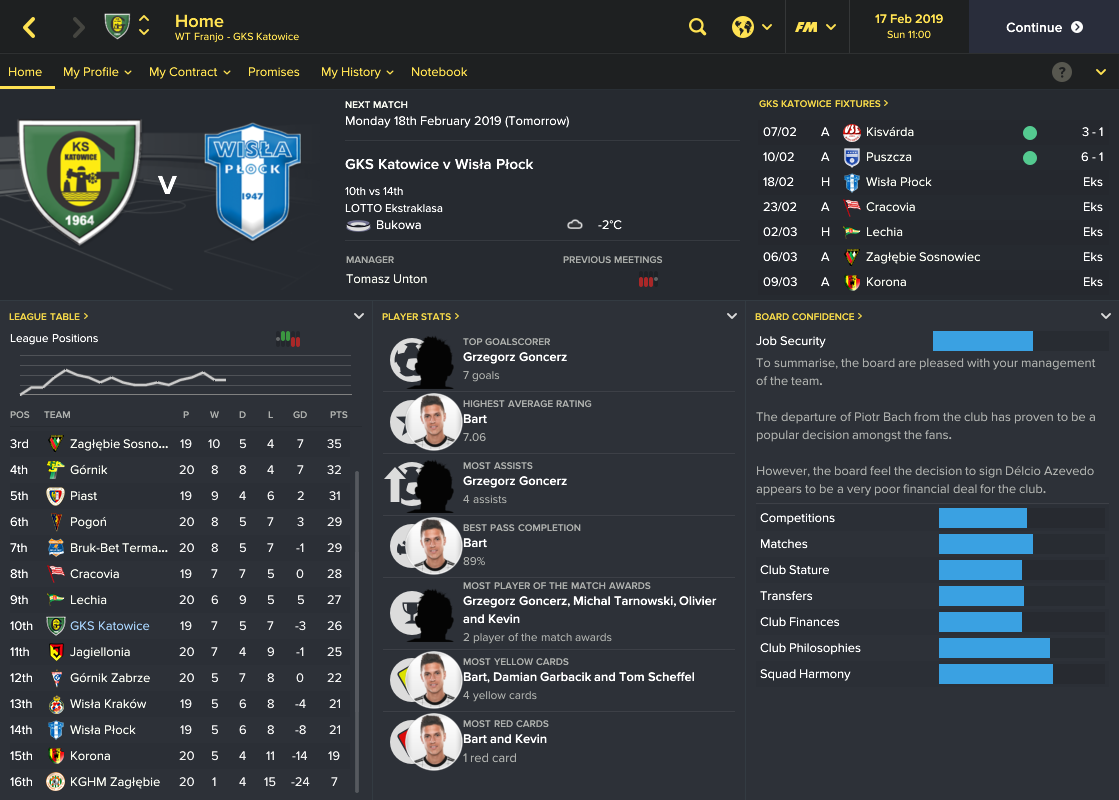 So. Wisła Płock. It’s strange in a way watching them disembark from their team bus. If I’d answered the press differently about the rumours of me moving there over the winter break, maybe it’d be me getting off that bus. I’d be getting ready to play my first match, poetically at Stadion GKS Katowice. I stand by my decision to deny interest though. I might go as far as to say that they’ve got a marginally better squad, with players more used to playing in the Lotto Ekstraklasa, but my team is made up of players that I know, and for the most part, players that I’ve brought in. I trust my team and that’s not a thing that should be understated.

It’s snowing again as I make my way back inside and into the home changing room. We’ll line up with the extremely standard 4-2-3-1 that’s often served us so well this season, with no real surprises in terms of personnel. Nowak starts in net with Scheffel, Olivier, Wilson and Garbacik in front of him, Bart and Hurley in midfield, with Janga, Fossy and Kevin behind Goncerz.

10 minutes in, a hoofed goal kick flies into our half. Reca nods it on for Guinean striker José Kanté, who dribbles easily away from Bart and fires just wide.

A few minutes later, the 2 almost connect again when Reca swings a cross in from the left towards Kanté, but Olivier heads the ball clear. Fossy goes for the header but aerial prowess is not his strong suit. Wlazlo beats him in the air and heads it back to Kanté, who makes himself a yard of space and places the ball into the bottom left hand corner. We immediately try to get on the front foot and try to control the game. By the end of the first half, we’re full on attacking Płock, but we remain behind as the whistle blows to signal the break.

5 minutes after the restart, Reca plays the ball to Aurélio just inside our half. He dribbles forwards with purpose and gets to the edge of the box, before lashing a shot towards the bottom corner of our goal. Luckily, Nowak is on the ball and tips the ball behind. Zgrablic’s header from the resulting corner is wide.

I am growing concerned about our chances of not conceding a second though. Płock have had 3 good chances, all of which have involved them exploiting the space between our defence and midfield. I drop Bart back to a holding man position in an attempt to close that area off.

The response is almost immediate. We start a pretty clunky counter attack after a spell of possession for Płock breaks down. Kevin passes to Hurley, who chips the ball into the box first time for Janga. The young Dutchman takes it down as the keeper rushes out, and powers it past him into the back of the net. I feel my vindication blanket flop down onto my shoulders once again.

With 23 minutes to go, Płock are venturing into our half again. Wlazlo catches Olivier out with a pass in behind him, into the path of Kanté. Olivier recovers with an inch-perfect sliding tackle, but in doing so, knocks the ball straight back to Wlazlo, who smashes it in off the bar.

I bring on Kwarko and Tarnoski for Kevin and Goncerz to try to give us the physical advantage against Płock’s tiring defenders.

With 15 minutes to go though, our bottle seems to have gone. Aurélio drives the ball against the foot of the post, but the clock ticks away and the whistle blows, signalling a 1-2 loss. 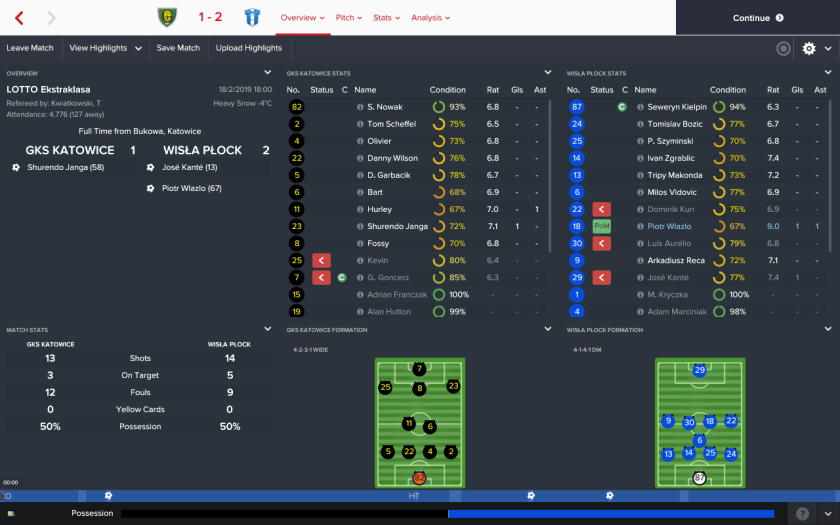 We’ve now lost 3 on the bounce but 2 of them were against very good sides. Am I disappointed? Yeah, of course. Am I worried? Not really. We’ll sort ourselves out.

And who better to sort ourselves out against than Cracovia? I had low expectations at Stadion GKS Katowice, and we came away with a well deserved 4-0 win. Now we’ll go to their place and hopefully pick up another 3 points to end our miniature slump.

The good news is that Gregurina is back in full training. The bad news is that Tarnowski comes down with the flu just a couple of days before the match. I was considering giving him a start but he’s only fit enough for a place on the bench. Therefore, we go unchanged.

20 minutes in, Cracovia are retaining possession well, presumably to kill off any early “We can turn these over again” spirit we may start with. It’s the home side that get the first chance when Platek slips through Adamczyk, but his shot goes into the side netting.

Some worrying news comes in the 24th minute when Goncerz suffers a chest injury after a particularly rough challenge. He’s able to play on though, so he does.

Before the half hour mark, Jendrisek sprints away down the left wing, leaving Scheffel for dead. He gets to the byline and crosses into the centre, and Platek’s there to head it in. 0-1. We change mentality and try to control the game.

At half time, I sacrifice Fossy and bring on Kwarko, who moves to the right wing. This frees up Janga to move up front with Goncerz in a 4-2-4. He’ll play as a false 9 to try to link our midfield to Goncerz.

With not even a minute of the second half gone, Adamczyk releases Platek, who’s through on goal, but his shot comes back off the post.

The next 10 minutes are all Cracovia, and in the 54th minute, Forsell curls a brilliant 20 yard free kick over the wall and into the top corner. This will not do. We go attacking and we’ll try to be more fluid.

Just after the hour, Kevin plays a good ball into the centre of the pitch for Janga, who runs it to the edge of the area but shoots just wide.

A few minutes later, Adamczyk, one of the best performers today, feeds Nagy, but his shot is saved well by Nowak. We go fairly narrow to try to limit the number of through balls cutting through us, and we’ll close down slightly less to keep our shape.

With about 15 minutes to go, Goncerz plays a nice ball into the left channel for Kevin, who’s cutting inside. He toe pokes it into the far corner of the net, but as I’m in quite a critical mood, the keeper should have done better. In a final roll of the dice, Stryjek comes on for Janga, and will be the poacher while Mr. Link-up, Goncerz, will play as the target man. We go more direct as we’ve now got 2 big players up front.

I do bring Savanovic on for a late cameo, but we can’t turn the tide. Another match ends 1-2. I go into the changing room and wait silently while the players trudge in.

“In our last 4 competitive games, we’ve conceded 9 goals and scored 2”, I seethe. “Do you think that’s good enough?” I ask nobody in particular. No response. All eyes are on the changing room floor. “What’s so fucking exciting about that floor?” I snap, prompting the players to snap their heads up towards me. I turn to Tom Scheffel. “Is it good enough, Tom?”

“No, Boss”, he says monotonously. I turn on Grzegorz Goncerz.

“Is it good enough, Grzegorz?”

“No, Boss”, he echoes. I can sense that I’m getting through, but I need to make this hurt. I wheel around towards Hurley, Kevin and Olivier, who are sat side by side, looking nervous.

“What about you 3?” I demand. “I brought all of you here because I thought you could step up to this level and make this club better. Was I fucking daft?”

“No, boss”, they reply in unison. I turn back to address the room.

“NO, BOSS!” Comes the slightly more enthusiastic reply. The words echo against the tiles for a second or so.

“No, it’s fucking not.” I sigh, grabbing my trusty grey coat and walking out of the changing room. I don’t hear a single word as I stride down the corridor. I think I got through to them. My old manager at Worksop Town would be proud. Something tells me that spurring the players on won’t be enough though. I desperately need to make some changes, and as far as I’m concerned, from what I’ve seen lately, nobody’s place is safe in my squad.