I should probably explain my secondary system. 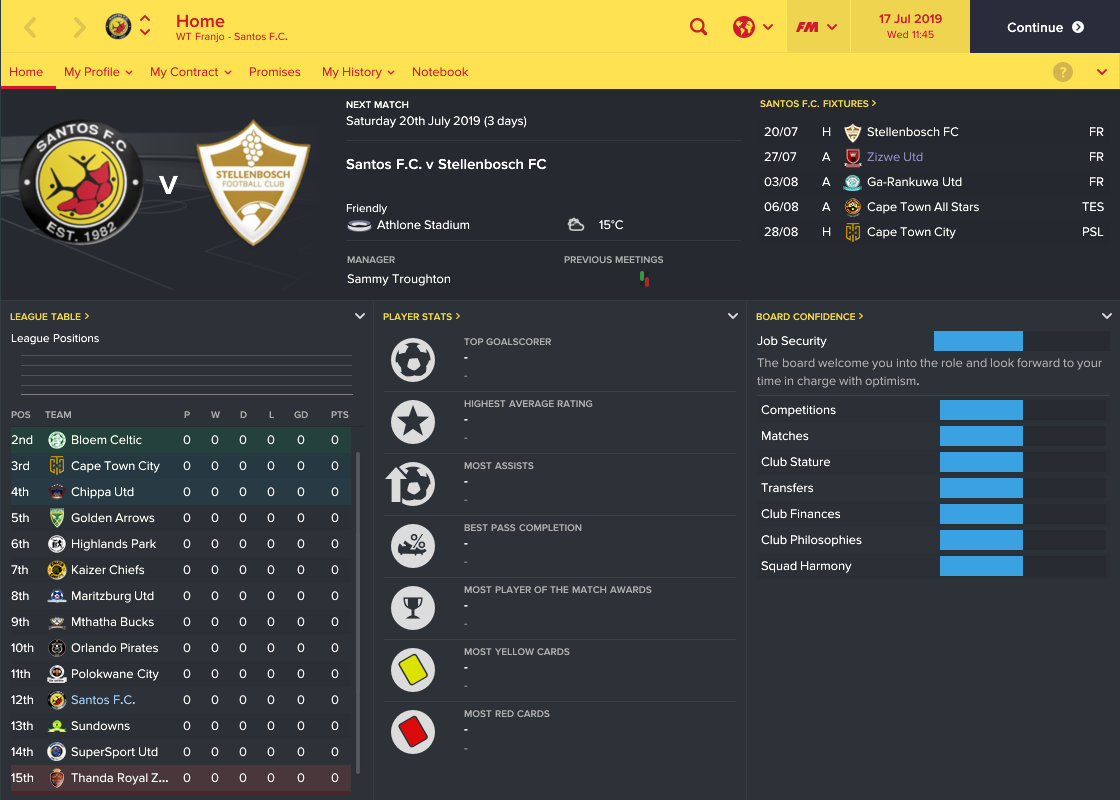 So now that I’ve met my team and have a vague idea of what they can do, it’s time, weirdly, to start my second pre-season of the summer. It kicks off in quite baffling fashion when backup goalkeeper Keenon Blignaut knocks on my office door after our first training session. He’s clearly wound up and wants to discuss his lack of first team football. I fix him with a quizzical look, wondering momentarily whether he’s gotten his hands on my preliminary lineup, before reassuring him that if he works hard there’s no reason why he can’t push for the first team. Just between us though, I’m looking for a first choice keeper to replace the average Dino Visser, and Dino’s comfortably better than Keenon.

Our first outing with Project: Foxy goes very well as we take on South African second tier side Stellenbosch FC at our own Athlone Stadium. Left winger Sello Japhta and attacking midfielder Sullie are the standout performers in a 4-1 victory, with the former bagging a goal and setting up another and the latter grabbing 2 goals. Striker Emil Sambou gets the other goal while right winger Ryan Moon sets up 3!

As I told you when I arrived, as well as Project: Foxy, I have delicately crafted a mysterious secondary system that I’ve named Project: CO. However, I know that for Project: CO to work, I need to add an all round top quality player to the squad. Therefore, I make a bid to spend £70k of my transfer budget on none other than Newport County’s Joss Ladabie.

My scouts aren’t too familiar with Joss, but I know from reputation that he fits the bill. We agree terms and there’s just the formality of a work permit to be granted so that Joss can join us, but I nearly spit my morning coffee out when I realise that the decision on whether to grant his work permit will be made on the 22nd of August. Today is the 23rd of July. Getting a quality foreign player may not be as simple as I first thought.

Our second friendly sees us travel to our semi-professional affiliate club Zizwe United. We do them the favour of showing up and flaunting our second string and I assume that they’ll be too awestruck to put in a performance, so imagine my surprise when they send us back nursing a comprehensive 0-2 defeat. It’s an uncomfortable afternoon.

I knew when I bid for Ladabie that the deal had a chance of falling through, so at the same time I made a £2.5k bid for an old friend.

Benjamim is an all rounder. I know this and you know this. We had a year apart when I moved to Katowice, although I would have brought him with me if I hadn’t already had 2 comparable midfielders in Bart and Mario Gregurina. I want to sign him not only because he’s so rounded, but also because he’s been criminally underutilised since I left Volcano Island. Like with Joss however, we’ll have to wait a full month to find out whether Benjamim can join.

In the meantime, we’ve got more friendlies to play. We host Grassy Park next, a semi-professional club from the Northern Cape Division 2. Again, we line up with Project: Foxy, and we come away with a narrow win. The only goal comes just into the second half when right back Itumeleng Tlali’s long ball forward is nodded over the keeper by young midfielder Sakhile Maloka. 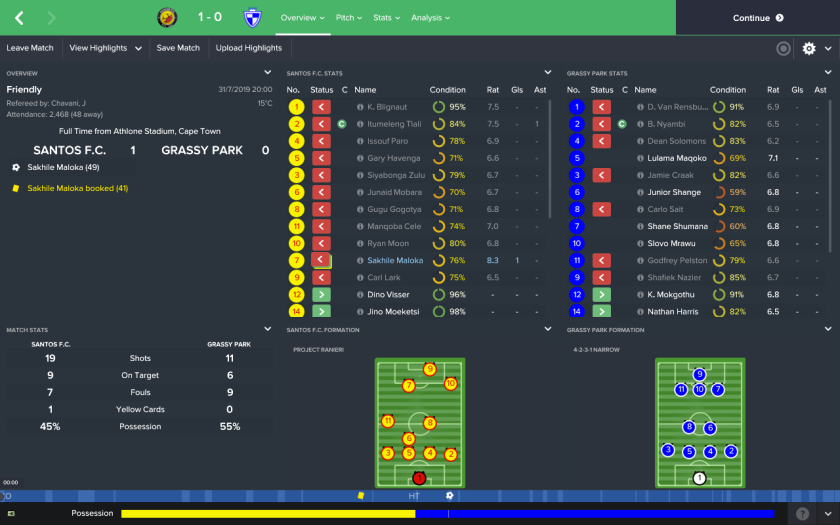 With not much else to do except wait on Benjamim’s and Ladabie’s work permits, we press on, focussing on our fitness and system familiarity in training. We then travel to Gauteng Division 2 side Ga-Rankuwa United in another friendly. A Ryan Moon penalty and another goal for Sakhile Maloka earns us a 2-0 win. 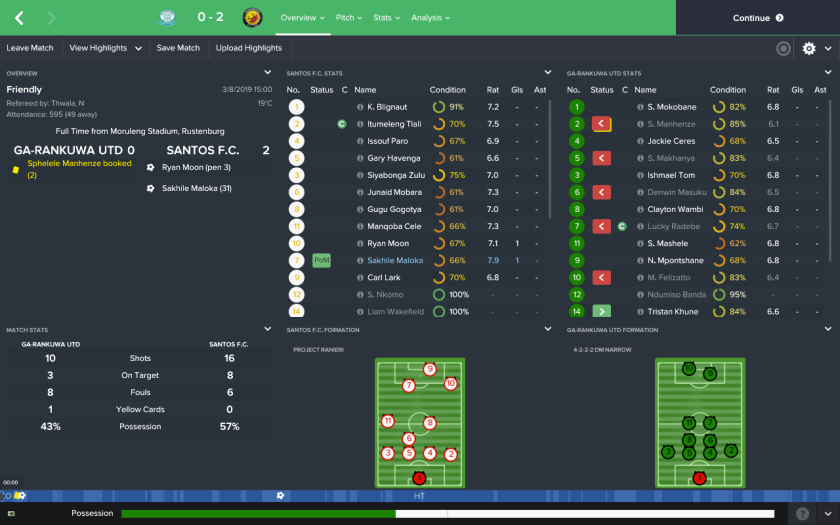 At this point, I’m getting worried that my bids for Joss Ladabie and Benjamim will be derailed, as I’m not sure how generously South African work permits are handed out. Therefore, we need to find a top quality all rounder with a South African passport. And I think we have. 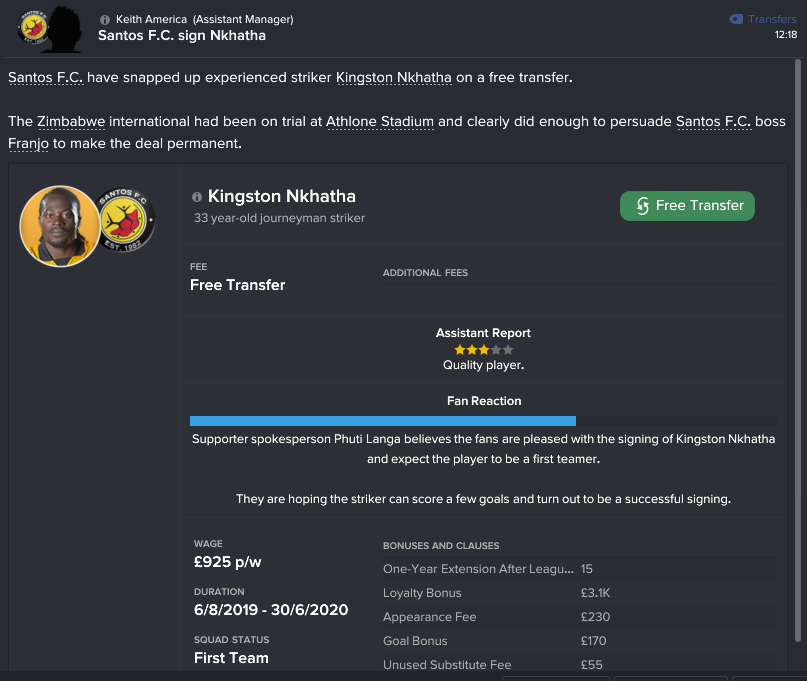 Kingston Nkhatha has arrived. I dub him Khat, partially as an homage to Danny John-Jules’ Red Dwarf character of the same name, and partially because we’ll need him to roam around doing whatever he wants, similarly to my 2 feline travelling companions Meatloaf and Burnie.

Having said that, I should probably explain my secondary system, Project: CO at this point. During my flight over from Katowice, I listened to Ruud Gullit’s pretty condescendingly named audiobook ‘How to watch football’. Aside from being a really good listen (Or read, if you’re not as lazy as me), it really opened my eyes to the idea of the Libero; an extremely rarely utilised role in the modern game. A libero is ideally an extremely smart, technically gifted and physically dominant footballer, much like prime Gullit, who positions himself behind the central defenders when the team is off the ball, but then roams up the pitch when the teams wins possession, becoming an advanced creative outlet and potential surprise goal threat.

That is what Project: CO is all about. If we have an average team, why not have one player that can be the last line of defence, main creator and goalscorer all wrapped into one? Someone that can make everyone else 10% better by being there to call the shots and make everything happen. The instructions to the team are minimal as I only want them to create a disciplined framework for Khat to operate inside. 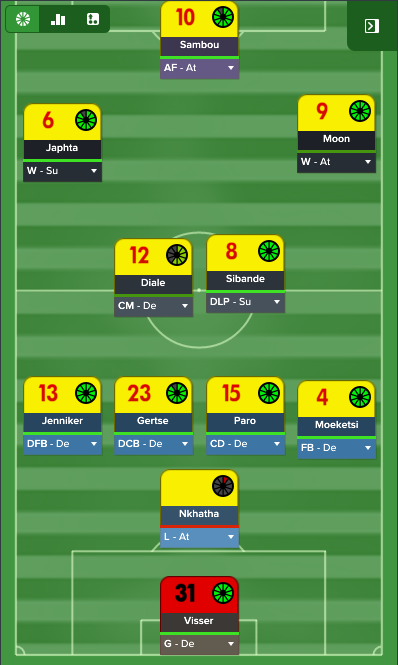 Before you call me mad, bare in mind that we can’t afford to gut this team and rebuild it this Summer, and frankly I wouldn’t want to if we could. We need to live within our means, and for me, that once meant playing a goalkeeper as a target man. Today it means playing a 33 year old journeyman striker as a Libero. I know we’ve only just met, but I believe in Khat. I believe that he can be our Libero. He can be our Ruud Gullit. He can be the main player in our Project: Chosen One.

On the downside, he’s been around the block a bit, and at 33 isn’t the ideal age to dramatically change his position, but on the upside he’s got a South African passport despite being Zimbabwean, so we can snap him straight up without having to wait a full bloody month for a work permit.

Cape Town All Stars are up next. It’s quite an ironic name for a second tier side because there are quite a few top flight clubs from Cape Town, and our names all contain a wee bit more humility. We fire up Project: CO for the first time and teach the “All Stars” a lesson in a 2-0 win used to honour the career of their centre back Howard Davids. Ryan Moon continues his good preseason by setting up both goals, one for Sello Japhta and one for Emil Sambou. Khat has a very solid game, which for a striker playing his first game behind the defence is extremely promising.

We carry on our pre-season with 2 more solid wins against First Division sides. Sullie gets us the only goal in a 1-0 win over Steenberg United… 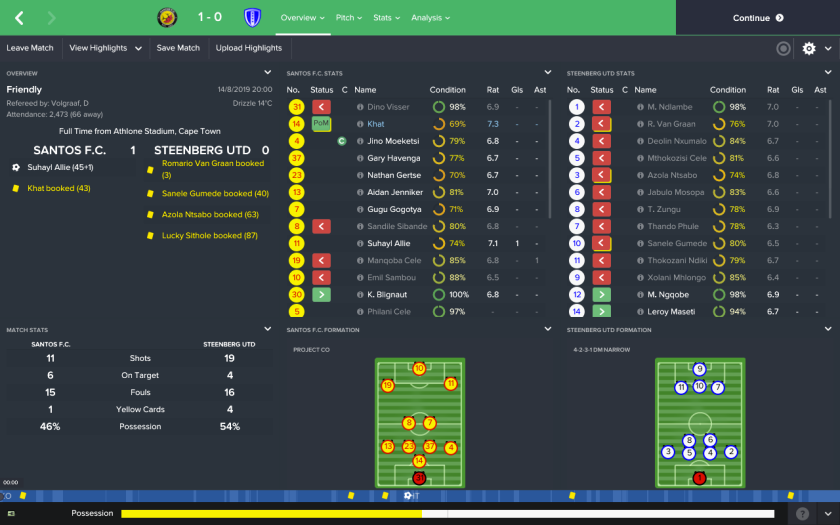 …And our incredibly named backup left back Siyabong Zulu and new signing Khat get us the win away at FC Cape Town. 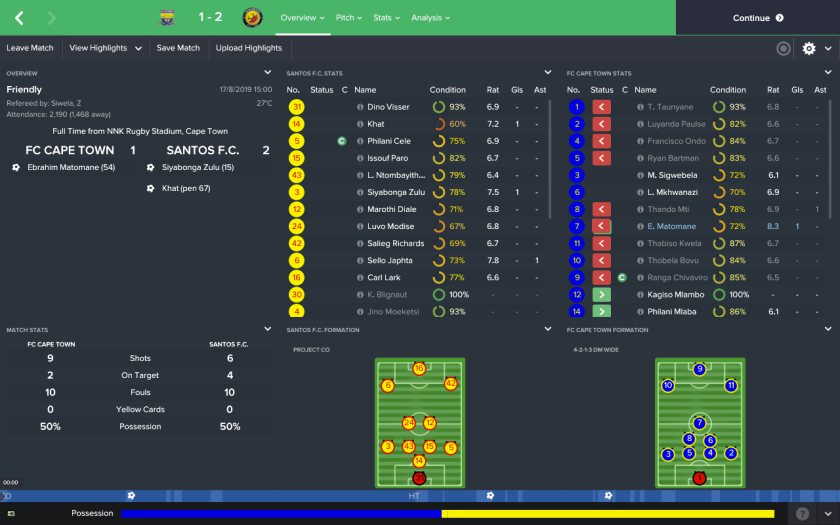 And then comes the big one – in our final match before the Season begins, young winger Salieg Richards and Emil Sambou get us a win over BARCELONA.

Now, does it matter whether it’s Lionel Messi’s FC Barcelona side from La Liga, or Gerardo Cozzolino’s Barcelona FC side from the South African Regional Leagues? Not to me, lads. Not to me. 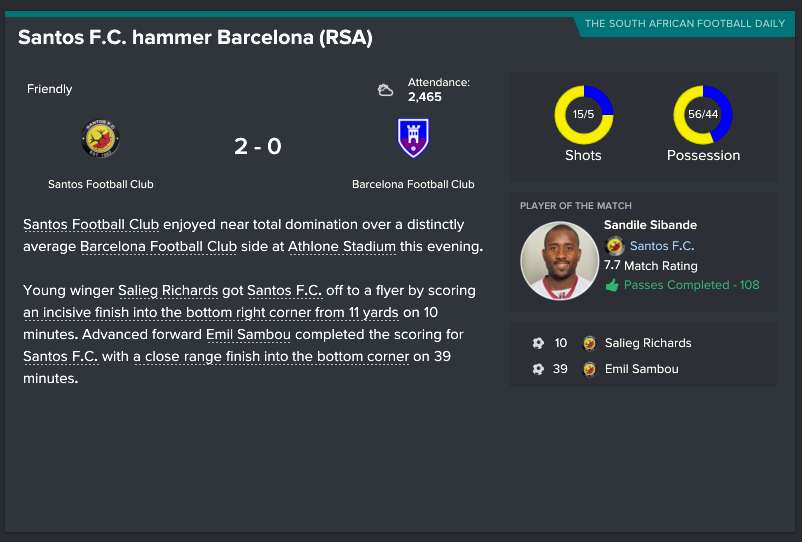 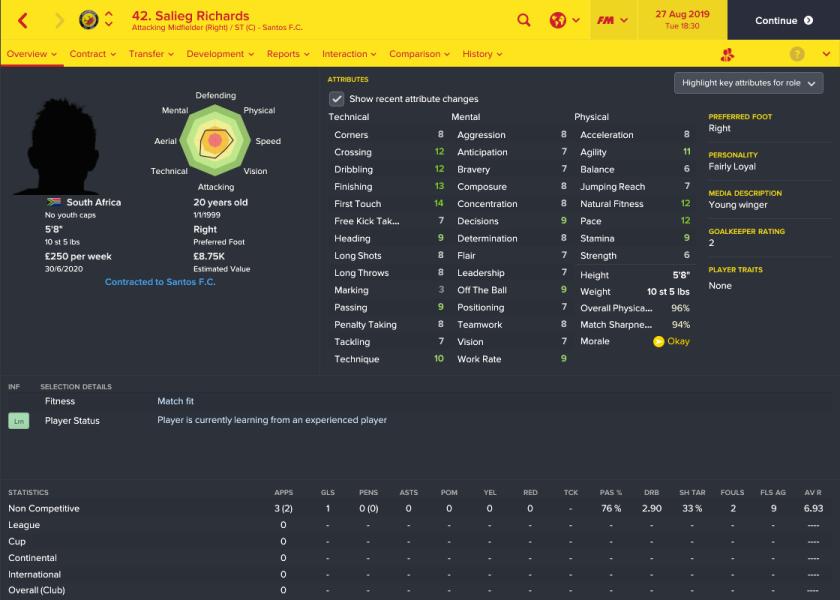 Sadly, Joss Ladabie’s work permit is then rejected, which isn’t ideal. We appeal the decision, but we won’t know whether he’s joining until after our first league match. What we can do though is sign staff. Lots and lots of staff. My backroom team has grown dramatically this Summer from this: 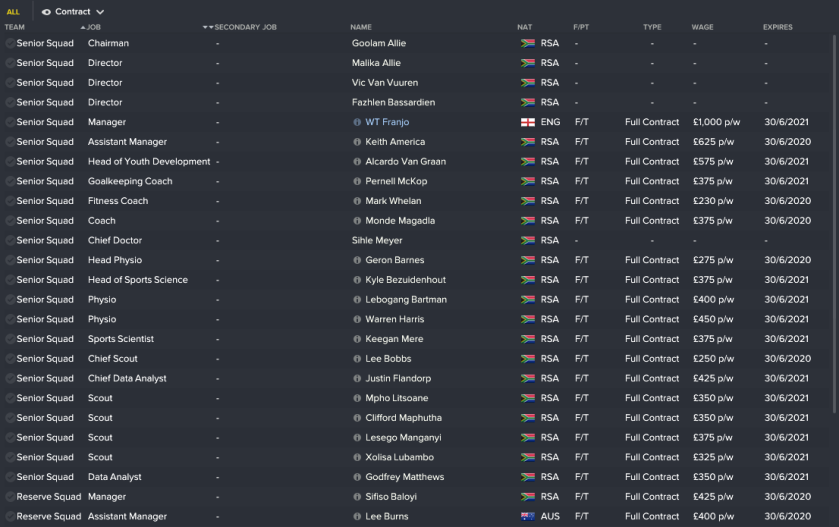 My first competitive match as Santos FC Manager is at home against Cape Town City, who’ve finished in the top 8 4 times in the last 4 Seasons. We’ve got our systems now. We’ve got our players, our staff, and of course we’ve got our chosen one. We’ll be ready.

It’s good to be back.