It’s going to be an extremely challenging year for a whole bunch of new reasons.

“Ready?” I sit myself down next to Khat on the bench. He nods. “Remember, no sprinting about, you’re an old man”, I grin. “What’s your job off the ball?”

“Roaming, not drifting”, I correct him.

“Well, people who fall asleep on little inflatable rings will drift out to sea, whereas a Lion will roam around looking for other animals to rip apart and eat.” I narrow my eyes, trying to work out if I’ve been clear enough. “Do you see my point?”

“There’s no current on a football pitch”, he replies happily.

We’re all feeling the nerves a bit today, and if there’s one person I’ll forgive for being more nervous than me, it’s Khat. I’m asking him to throw out everything he’s learned in the last 20 years and pretty much learn the game from scratch. A lesser footballer would’ve told me to fuck right off, but I can tell that Khat wants to give it his best shot. We’re setting up today with our controlling Project: CO. Visser starts between the sticks with Khat in front of him. Moe, Paro, Gertse and Jenniker make up the back 4, with Sinbad starting in midfield alongside tough midfielder Gugu Gogotya, the man clearly named by a newborn baby. Moon and Japhta are on the wings and Sambou’s up front.

“Come on then, lads!” I cry, clapping my hands together as I stand and walk towards the changing room door. With the cacophony of 18 sets of studs clacking against the concrete floor, the players get to their feet and follow me, clapping and cheering with anticipation of the great game of football to come. 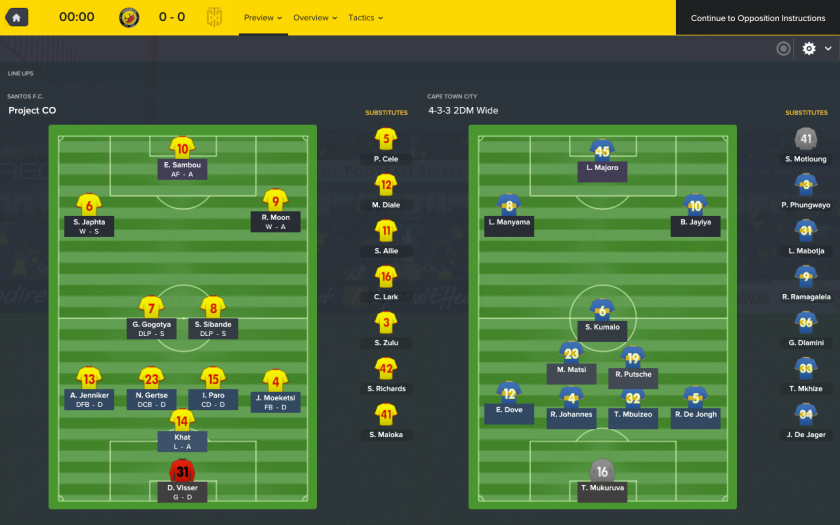 When we trudge back inside for half time, I’m shellshocked. What just happened? Somehow the score’s still 0-0 but we could be 3 or 4 down. We’ve not managed a single shot, while Cape Town City have huffed and puffed but somehow our little straw house is still standing. By now, they should really have been able to blow our door down, cave our roof in and piss in our fridge for good measure. That was completely one way traffic. Although saying that, our back line was pretty resilient and fair play to them for keeping the scores level.

For now, we’ll go a little more structured. I’m drawing a blank. I don’t know what else to do. Maybe with a similarly resilient defensive display in the second half we’ll escape with a point.

15 minutes after the break that’s exactly what it looks like is going to happen. But then I decide that no, you know what? That’s not how I’m starting off my career in Lansdowne. I usually say that an opening day draw is fine, but not like this. We go attacking.

A few minutes later, Manyama collects the ball just outside our box and dribbles out onto the left wing. He swings a cross in but Gertse gets there first. Our centre back volleys the ball and it travels about a couple of inches before hitting Ramagalela right in the face. It bounces back towards goal – And bobbles just wide.

With 20 minutes to play, we look nervous. I’ve never seen a team look so nervous during a match. I stand on the touchline and bellow words of encouragement. I also send on striker Carl Lark for Sambou, who’s been a spectator for the last 70 minutes.

In the 77th minute, they’re still all over us. De Jongh passes short from a free kick 35 yards out to Matsi and he squares it for Manyama, who takes the ball forward and smacks it against the bar.

With 10 minutes to go, Paro wins the ball outside our box, breaking up yet another Cape Town attack and prompting a huge sigh of relief from me and my assistant Keith. The Burkinabe defender plays it out to Ryan Moon on the right, who gets it out of his feet before playing a long ball over the top. Suddenly, Carl Lark takes it down and he’s through on goal. He shrugs off the centre backs, bursts through into the box and blasts the ball into the back of the fucking net. Football, eh?

Captain Cele replaces the more attack minded Ryan Moon on the right wing and we go to a defensive 4-1-4-1 formation. We cling on, and I’m happy, but my God we’ve got to reconsider this system. That match has not exactly gone as I had planned. 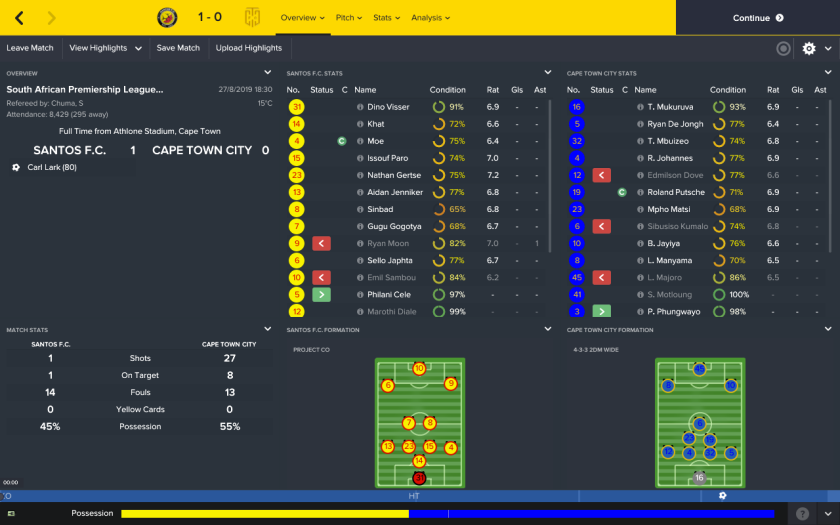 In the next few days it’s made clear that the transfers of Joss Ladabie and Benjamim are dead in the water. So too are late attempts to bring in Paro’s compatriot Lassina Touré, who starred at centre back for my SC Angrense side, and Délcio Azevedo, because of high wage demands and work permit issues respectively. We reject a couple of loan offers from Thanda Royal Zulu, one of our relegation rivals, for Tiali and Gertse, and with that the transfer window closes.

I’m left with a knot in my stomach. Even though we’ve picked up an opening day win, I’m already seriously doubting Project: CO as a system and any attempts I’ve made to bolster the quality of my squad have been promptly shot down.

It’s going to be an extremely challenging year for a whole bunch of new reasons. It’s lucky I love a challenge really, isn’t it?