It’s time to tie this season up with a bow. 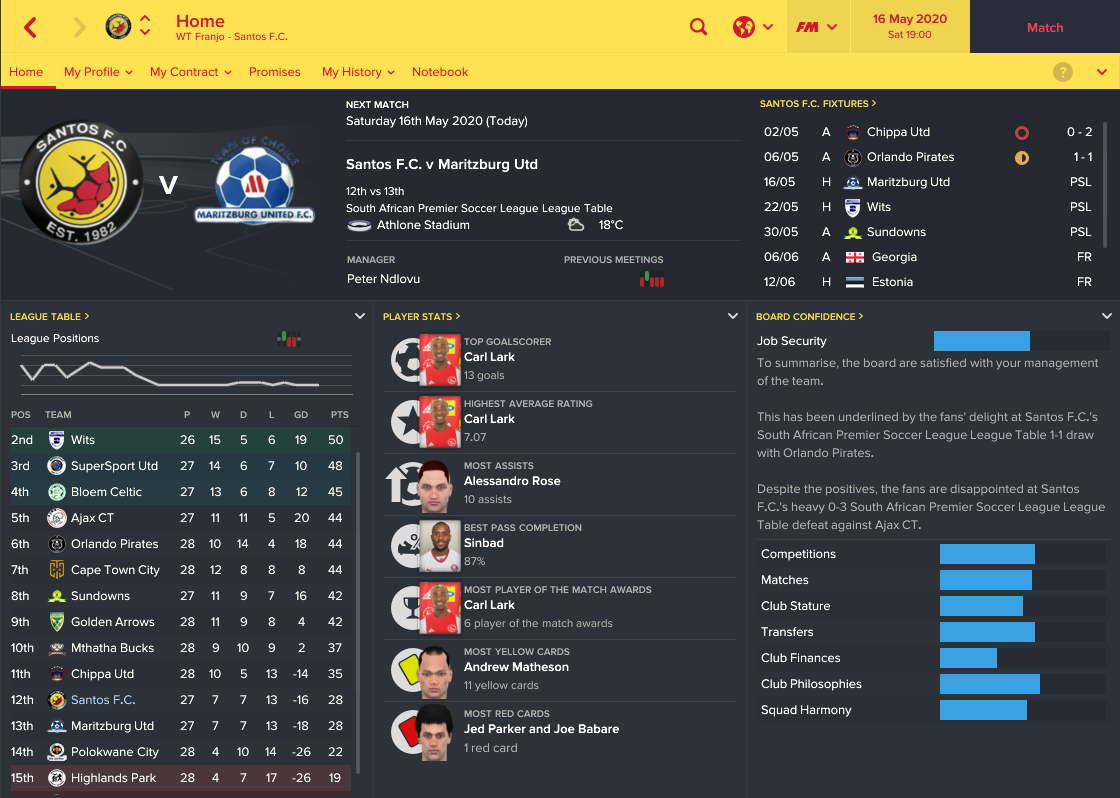 Alright, it’s not exactly been plain sailing for Carl Lark this season and he’s had to endure some extreme form troughs as well as enjoying the peaks, but he’s set 2 Santos records for number of goals scored (13) and number of player of the match awards (6) in a single season, breaking Emil Sambou’s and Tyren Arendse’s records respectively with time to spare. Fluctuation in form aside I think we can all agree that that’s not a bad season at all. Nice one, Carl.

With 3 matches to go and with little to play for, we welcome Maritzburg United to the Athlone Stadium today, who are managed by former Sheffield United and Zimbabwe striker Peter Ndlovu. They sit 2 goals below us, also on 28 points in 13th and it would be rather nice to open up a bit of a gap.

Thoahlane’s unlucky to miss out as he overcomes a damaged shoulder just in time for the match, but then picks up a thigh strain in training, ruling him out for a few more days. On the upside though, Sony Norde and Joseph Ekwalla are both back in contention after overcoming their respective injuries. Or you’d think so wouldn’t you, but now that Sony Norde’s just about fit again he’s been called up to the Haiti squad and will not be available, much to my frustration. Haiti must’ve hired Martin O’Neill.

Without banging this drum again too much, and taking into account the fact that we could drop a single league position, we’ve really got nothing to lose now and I’m hoping for new and better quality incoming faces in the Summer. I’m also hoping to start next season with a squad capable of dominating a match with Project: Meatloaf, so I want to use these matches to give my current crop of players the chance to get used to my way of playing and to show me they can handle it. Ekwalla and Cele come in for Gogotya and Thoahlane, with Gertse shifting across to centre back. Let’s see what they can do.

They do great. 12 minutes in we take the lead when Ekwalla slides the ball through Martizburg, who are penned inside their own box. A lesser player would take it easy after beating 2 club records, but King Carl makes sure he gets on the end of the pass and tucks it away.

The scores are levelled 5 minutes later though when Shandu dribbles down the right and crosses for Mnyamane, whose first effort is kept out by Komo’s feet but who tucks away the rebound.

A few minutes later the action continues though. It reminds me of Angrense, where a lot of games were open and non-stop end to end football, which is a pleasant surprise. This time Moon gets away down the right and whips a cross in towards the far post, where Japhta arrives to bury it in the back of the net. 2-1.

Before the half hour mark we get our third when Sinbad plays a beautiful pass down the right wing from inside the centre circle. Ryan Moon reaches it at the byline and pulls the ball back for Lark, who puts it in from close range.

A few minutes later Mnyamane hits the post after connecting with Ndlovu’s drilled cross, but then deep into first half injury time Jenniker pushes the striker to the floor and gives away a penalty, which Khumalo places firmly to Komo’s left to make it 3-2.

The second half is not such a frantic affair, which I’m pleased with. With 20 minutes to go I bring Moe on for Moon and we go to a counter attacking 4-1-4-1 to kill the game off. We nearly go one better with 15 minutes to go too, when Sinbad curls a free kick against the bar.

Lark goes off with 10 minutes to go after taking a knock on his heel, earning a standing ovation from the Athlone as he’s replaced by Ernie. We see the game out to claim an impressive and somewhat stylish 3 points and open up a 3 point gap over our opposition. Perfect.

Phil Cele’s Santos career could well be over after suffering a back strain that’ll keep him out for 4-5 weeks. I’m still torn on whether I want to keep him at the club, but I’ll leave that decision for another time. 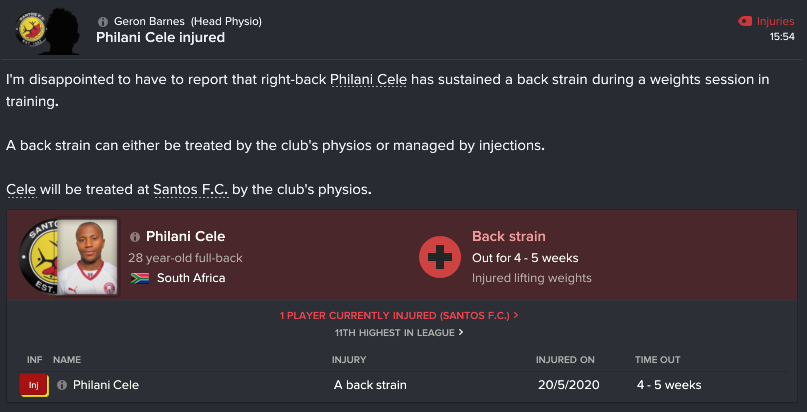 Well do you know what? I’m sick of Bidvest Wits and I certainly don’t want to do them any favours. We’re at home again and we’re going Project: Meatloaf. The fit again Thoahlane replaces Cele with Gertse going back on the right and Zulu comes in for Jenniker. 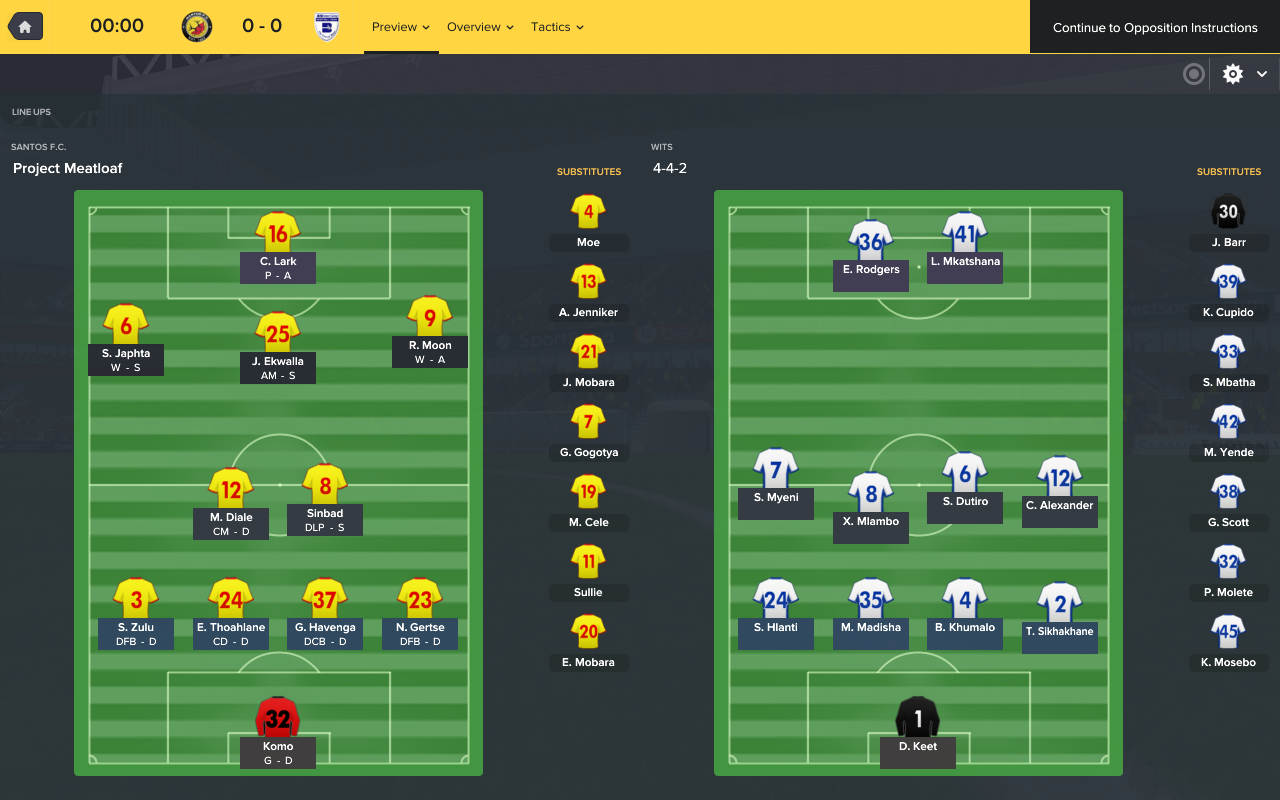 The first half is quiet, with Moon going closest to opening the scoring 8 minutes in when Ekwalla plays the ball through for him and he stings the Keeper’s palms with a powerful but poorly placed shot.

The first proper action comes almost 5 minutes into the second half, when Sinbad passes to Ekwalla 20 yards out, who flicks the ball straight on into the path of Lark again. Our top scorer shimmies past the centre back and captain Khumalo and shoots, but Keet parries it away. The loose ball rolls away as far as Moon though and he squeezes the ball home from a tight angle to put us ahead.

With 10 minutes to go, Mbatha plays a good ball through our defence for Rodgers, who runs through on goal but is denied by the outrushing Komo. We shut up shot once again with a 4-1-4-1, with Jenniker coming on for Japhta on the left wing, and we see the game out to claim another well deserved win.

Before our final match of the season, the draw for the European International League is drawn. Liechtenstein are in division D, as we were in 2018/19 when the European International League was introduced. That time we were in a tricky group with Macedonia, Kosovo and Andorra and we finished 3rd, well below both Kosovo and the promoted Macedonia and only winning the 2 Andorra games. There is no seeding so we could very well end up with a particularly easier or more difficult group. Fingers crossed for the former.

No clue here as to who we’ll be facing. I wouldn’t mind Gibraltar or Andorra, especially the latter who we have a proven track record against. The other 2 look very tricky though.

That’s what I like to see. We’ve been drawn in group 2 with Gibraltar who only became eligible 4 years ago. Their key man Jake Gosling plays for Stockport County in the Vanarama National League, so that’s a good omen. They finished dead last in the last International League Division D campaign, winning only once against Kazakhstan in a group also containing Georgia and Malta.

Interesting. I’ve got to admit I know absolutely nothing about Moldova. They very nearly did get promoted from Division D in their last EIL campaign, winning 11 points from Cyprus, Faroe Islands and San Marino and finishing just 1 point behind the Cypriots, who won promotion. They might be tough opposition. They did come 5th out of 6 in their Euro 2020 qualifying campaign though, above Malta but well below Belarus, Montenegro, Romania and Russia.

Ah, of course. Well at least we’ll get some more practice for our World Cup Qualifying group! Interestingly enough so do the other 2 teams, who’ll face each other in Group 5 of the World Cup Qualifiers. Montenegro actually got relegated from Division C in their last EIL campaign, only managing a narrow win over Bulgaria and a draw against the eventually promoted Scotland in a group also containing Northern Ireland.

For anyone unfamiliar with the European International League by the way, it’s a simple format. There are 4 Divisions; A, B, C and D and groups are drawn and matches played every 2 years, with one team getting promoted (And in the higher divisions, the bottom team getting relegated, but not in Div D). We’ll play each team in our group home and away starting in September.

Now that the EIL’s scheduled, our friendlies against Qatar, Costa Rica, USA, Bhutan, China and of course Russia are all cancelled. Russia seem unwilling to rearrange this time too so it looks like we won’t be getting this particular practice match. Anyway it’s time to tie this season up with a bow. We finish with a trip to Pretoria to face Sundowns. It’ll be a tough match as I’m going to stick with Project: Meatloaf even though it’s more suited to home games. As we’re guaranteed a minimum 12th placed finish now though (A 14-0 win could take us 11th, just saying) I’d rather have the team get more practice than a result today. In that vein I’m also going to make a triple half time substitution in advance: Young Thembinkosi Maluka will make the bench for the first time and will be introduced half way through for his debut along with Ernie and Luke Fanteni. In terms of our starting lineup, the only change I make is that Jenniker comes back in at left back, replacing Siyabonga Zulu, who’s picked up a 4th yellow and so a 1 match suspension.

Sundowns get off to a promising start when 10 minutes in, Anele flicks the ball ahead of Ntulli, who runs one on one with Komo and hits the post with a placed effort.

On the half hour Sundowns are at it again, this time counter attacking after our corner’s cleared. Motupa dribbles near enough the length of the pitch down the left wing, and skips past the challenge of Gertse to reach the byline. He chips a cross in for Andria, who heads the ball past Komo and into the net to put the home side ahead and claim a fantastic assist for Motupa.

Not long after, Mosadi’s corner is nodded on by Andria and directed towards goal by Gyimah’s diving header, but Aidie Jenniker boots it off the line. The ball’s worked around before Mosadi passes to Ntulli just inside the box and he shoots well, forcing a good diving save and another corner from Komo. From the corner though it’s our turn to counter, with Japhta receiving the ball and playing it over the defenders that didn’t venture forwards for the corner. Moon receives the ball and runs through on goal before shooting at the near post, but Onyango makes a good save to deny him.

Moon goes close again before half time; after he’s released by Lark he bursts into the Sundowns box, but shoots straight into the arms of the keeper. At half time my pre-determined changes take place, with Fanteni, Ernie and Maluka replacing Diale, Sinbad and Lark, with Ernie playing as a number 10.

Just into the second half, Mosadi’s floated cross is met by Anele, who loops a header high and wide of our net. It’s not until 10 minutes from time that Sundowns double their advantage, when Mtshall crosses and Andria arrives to volley in his second of the day.

A silver lining arrives 5 minutes from time for us though, when Japhta plays a nice ball through for Maluka in a good position, who shoots from 12 yards and forces a good save from Onyango. 0-2 is the final score of the final game of the season.

Since Santos were promoted to the PSL in 2017, we’ve finished 13th in 2018 and 13th in 2019. In 2020 we’ve finished 12th, which is improvement. Slow improvement, but improvement nevertheless. But now it’s time for the players to head off on holiday, and for me to get stuck into reshaping this squad. I can’t wait. Summer 2020 is going to be a good one.