4 years, 4 clubs. I’ve enjoyed my first season with The Peoples’ Team and I want to stay on and improve them next season, unless someone like Bayern fancies snapping me up… Nudge, nudge, wink, wink, hint, hint, Mr Rummenigge… Let’s have a look back on year 4. 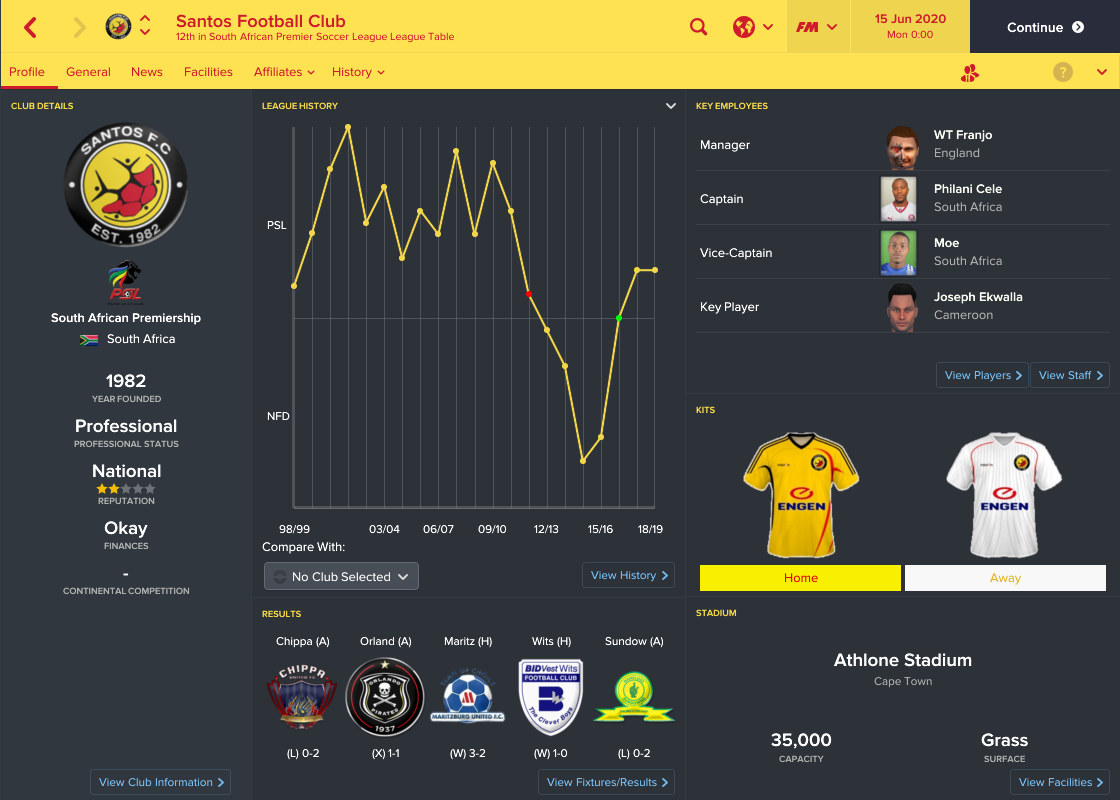 Highlight: Our 3-0 away win over Cape Town City in February

Lowlight: The supremely talented Sony Norde managing only 6 appearances (3 starts, 3 sub appearances) in half a season

Weirdly, in terms of my record this season there’s not been a huge difference between my season at Santos and my season at GieKSa (We drew 3 more and lost 3 more in Poland), but it’s all about perspective I suppose. In 2018/19 we had a great first half of the season and a horrible second half, whereas I feel like we’ve just had a consistently mixed bag this season. It’s like in the last months of Katowice I had to eat a 10 gallon tub of cottage cheese in one long sitting, whereas this year I’ve just had a spoonful per week and I’ve been able to mask the taste with other food that doesn’t taste like arse, making it a lot easier to stomach. Oh, I hate cottage cheese unless that isn’t clear.

Ajax CT winger Sameegh Doutie won the Player of the Season award for the PSL, annoyingly. It’s bad enough that our biggest rivals did the double over us by an aggregate scoreline of 0-6, but for them to have the best player in the league really grates on me. Credit where credit’s due though, consistently good performances combined with 11 goals and 9 assists in 27 matches make him a worthy winner.

The Lesley Manyathela Golden Boot Award is named after a supremely talented young Orlando Pirates and South Africa striker who tragically died in a car accident aged 21 after winning the award himself in 2003. The award this year goes to Chippa United’s 19 year old forward Tsepo Ngema, who struck 18 times in 27 matches. He was closely followed by 2 other top strikers though: Paulos Harrison of Kaiser Chiefs and of course our own King Carl.

“Mid-table” is a generous way of looking at a 12th placed finish in a 16 club league, but that’s where we ended up according to The Cape Town Football Express, who report that we’ve pleasantly surprised everyone that had expected us to battle against relegation. Maybe that’ll bring in a few more fans next season, because our average attendance of 8,481 is quite embarrassing when the Athlone holds 35,000. I know football fans have a lot of clubs to choose from in Cape Town, but come on! We’re the peoples’ team! Without the people we’re just a… Blank, nondescript team! Like West Bromwich Albion!

Speaking of the people though, the ones who did show up to cheer us on have named King Carl our player of the season with 40% of the vote. I’ve said a few times so I won’t bang on about it, but Lark’s had a good solid season and I’ll hope for more of the same next year. Top assister Ryan Moon, who also won the Young Player of the Year award, was the deserved runner up with 29% of the votes, with Sinbad completing the top 3 with 19%. The Team of the Season is extremely predictable, with Komo in net, Phil Cele, Gertse, Thoahlane and Jenniker across the back, Sinbad and Diale in midfield, and Moon, Ekwalla and Japhta behind Lark.

Going back to King Carl for a second, here’s some more key stats for our Player of the Year:

Siyabonga Zulu’s match-winning goal against Polokwane City in October wins the goal of the season award. We didn’t see many screamers this year, but sometimes a well worked and well finished goal in the right context is just as good if not better.

Joseph Ekwalla has been named signing of the season, which is fair seeing as he was one of only 3 permanent signings I made and the other 2 players made about 10 appearances between them. Joe has added a real touch of class though and I’m tremendously excited about how good he can be, especially as in his 18 matches he made 23 key passes, which is joint 6th highest in the League and just behind Ryan Moon, who made 24. My priority for the Summer is to tie the Cameroonian down on a longer contract, as his current one expires next Summer and he’s still not currently interested in committing.

The first time I saw Sinbad play, I thought he looked like a quality player. Maybe even our best player. The problem with quality players though is often that they don’t try as hard as the others. They often don’t need to because they’re talented and special, and will try even less once they get into their 30’s and their legs start to go. But on a scale of Hatem Ben Arfa to Cristiano Ronaldo, Sinbad is definitely further towards the latter, running 242.71 miles over the course of this season, which is the 3rd highest distance covered in the League. And at 32 years old too. What a bloody pro. Oh, and he completed 88% of his passes, more than any other Santos player.

As an appreciator of the art of defending, it’d be remiss of me not to acknowledge the efforts of Nathan Gertse, who made the 6th most key headers in the league (60) and Eliphas Thoahlane, who won 88% of his headers, the 3rd highest percentage in the league. Good job, lads.

Maybe I’m in some sort of weird rebound state of mind after last year, but I really like Santos FC. As an Everton fan, AKA “The People’s Club”, I really identify with the community feel around Lansdowne for this club. As I’ve said before, I think the only thing standing between us and some kind of success is the slack, negative attitude embedded in the team, and an extra sprinkle of quality wouldn’t go amiss either. I tried to rectify that in the Winter break and I failed, but with any luck I’ll be rectifying it over the next couple of months. Overall, it’s been a good year.

GieKSa have had a great season, and do you know what? I’m really, really happy about that. If they’d been relegated I would’ve felt guilty for leaving them in the lurch, or selfish that I jumped ship before my reputation took another relegation-sized blow. I mean, both of those things are still true, but at least they got themselves sorted out. After a single solitary point stood between Katowice and the 2nd tier last season, they actually finished in the top half of the table this time around, and so had a crack at the Championship Group as oppose to the Relegation Group. They finished 8th out of 8, but still, they did bloody well to get there in the first place, finishing 12 whole points above the relegation zone.

I was replaced at the helm by extremely promising young Polish manager Tomasz Kaczmarek, who took the probably rather sensible approach of dismantling pretty much the entire team straight away. His 4 most frequently used players were familiar faces though: Jack Hamilton, the goalkeeper who remains the player that I’ve spent the most money on in my career but didn’t play a single competitive match for me, Danny Wilson, who I named captain and has kept the armband throughout the season, Shurendo Janga, who always showed promise but not enough consistency, and Damian Garbacik, who in all fairness was a solid player for me. Hurley, Kevin and Goncerz are all still on the books but have struggled to break into the team this year.

Much to my immense excitement, Os Heróis are only going one way. They’ve had another great season and are improving year after year, obviously because of the great infrastructure that I set up and left behind. Pedro Amora is still in charge and after an impressive 9th placed finish in his debut season, he’s lead Angrense to 5th in the Second League. Taking into account the fact that they finished behind Champions Sporting B and FC Porto B, neither of whom are allowed to be promoted to the top tier, they were only 1 place away from getting promoted again!

In terms of familiar faces, Jaime Seidi is still the club captain, although like I did, Pedro uses him primarily as a calming substitute when protecting a lead. Benjamim’s still on the books, but didn’t manage a single appearance this season, and Cristiano Magina’s still got it, scoring 13 goals in 40 appearances in all competitions.

Honestly, there’s not much that I can say about poor Höllviken that I didn’t say last year. They’re still in the 5th tier of the Swedish Football pyramid, they’re still lead by Captain Wani Mukoko and vice captain Mattias Andersell and they still rely on Ghanaian midfielder Lawrence to make things happen for them. I hope they start to rise back up through the divisions soon, but it’s not happening yet.

Höllviken aside though, it’s been a good year for my former teams, and indeed for my current team. Let’s hope for improvement in Vellinge, Hero Creek, Katowice and Lansdowne over the next year.