I’ve got some International friendlies to play. 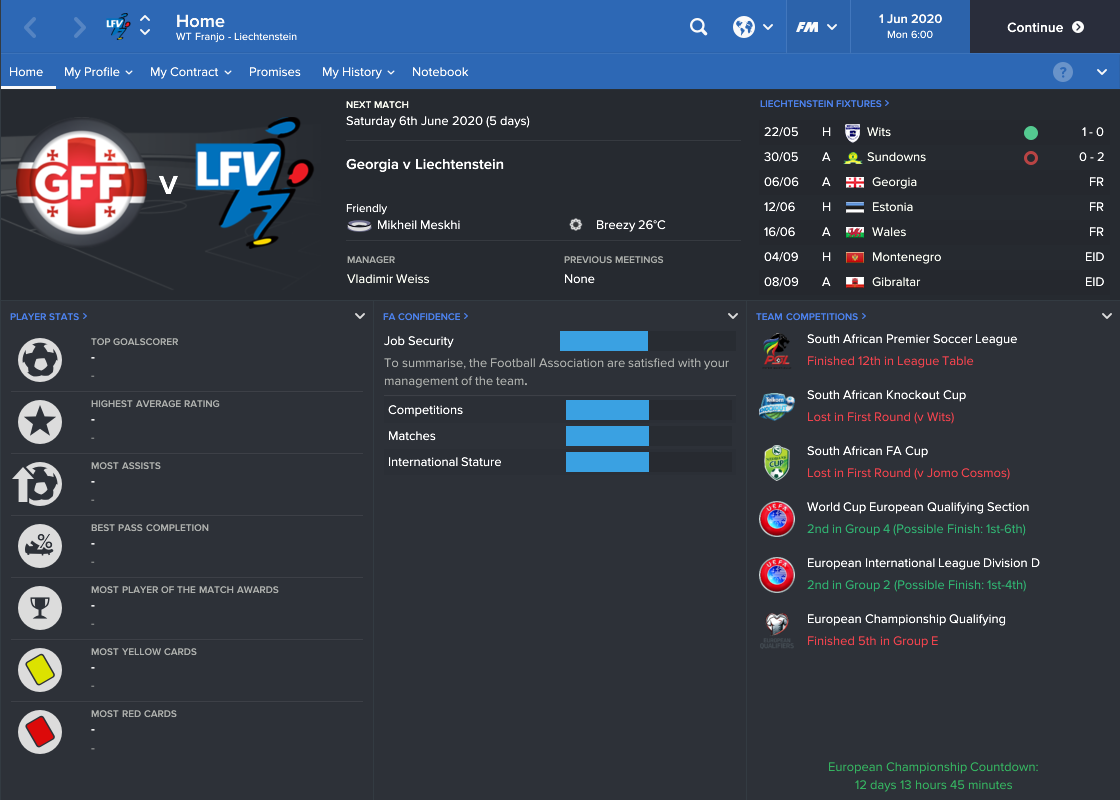 The work of a Football Manager is never done, so while my Santos team jet off on their holidays and before I can get down to the Summer shake up of my club side, I’ve got some International friendlies to play with Liechtenstein.

As inexperienced as I am at this side of Management, it’s my opinion that we need to use these friendlies very carefully as they’re the last ones we’ll have before we get to competitive football in the shape of the European International League in September, and I think the best thing to do is to pick a system and use it in all 3 friendlies. Our training time is obviously limited as we only get together every few months, so hopefully this’ll build some much needed familiarity. Our Project: Liechtensteiner served us pretty well as we took a respectable 1-2 loss away from Denmark a few months ago, so that’s the system we’ll be sticking with. We start with a trip to Georgia. We’re very similar personnel-wise as we were against Denmark but I’ve had to shuffle the pack a bit. B Büchel is in net, with Oehri, Grippo, Kaufmann and Spirig across the back. Schürpf, Wieser, Flatz, M Büchel and Göppel are our 5 man midfield, and Frick leads the line.

We get off to a bad start. I had my eye on Jano as soon as the lineups were announced as he’s the only Georgian player that I knew from reputation alone and as I recall he’s got some skills. 8 minutes in, he gets clear on the left wing and skims a cross in for Mchedlidze, who powers the ball in from 6 yards out to put the hosts ahead.

20 minutes later, Jano swings a corner in towards the near post. In an excellently drilled corner routine, Mchedlidze nods the ball on, Dvali heads it back across goal from the far post and Kverkvella heads it over the bar. It should be 2.

5 minutes later Georgia are still on top and they win a free kick on the edge of the box. Arabidze drills it through our wall and hits the post; Another near miss.

At half time I tell the Liechtensteiner boys not to panic. It’s only 1-0 and we’re only here to settle into our system and our team. Even if we do lose it’s not the end of the world.

Less than 5 minutes after the restart, Jano cuts in from the left flank and surges towards our box. He shoots from 20 yards but hits it straight at Benji Büchel, who catches it.

With 35 minutes to go I bring on young Yanik Ngele for Vinzenz Flatz, as I simultaneously both don’t want to drop him in at the deep end and want him to get used to playing for his country, as he’s one of our brightest young prospects.

With under 20 minutes to go it’s still 0-1, but Georgia threaten once again when Samkharadze receives the ball on the edge of our box and toe pokes a shot against the bar. I bring on Valentin Flatz and Domuzeti for run outs in place of Kaufmann and Frick. Valentin is a fairly functional centre back and captain of Swiss amateur side FC Schaan, while Enis is a fairly consistent scorer for Swiss semi-pro outfit FC Balzers.

A few minutes later Domuzeti gets a rare half chance for us after Wieser finds the forward in Georgia’s half with a long ball. He runs towards the box and shoots, but can’t get any kind of accuracy on the strike and sends it high and wide.

Targamadze has a very similar chance a few minutes from the end but also puts the ball wide, and he’s followed almost immediately by Zivzivadze cutting in from the left wing and shooting from 20 yards, but he also puts it wide.

To be fair, we have to put the fact that we hold out at 0-1 in the closing minutes down to poor Georgian finishing as much as anything else, but in the 90th minute a Dvali cross is met by Zivzivadze, who volleys into the net from close range to kill the game off. 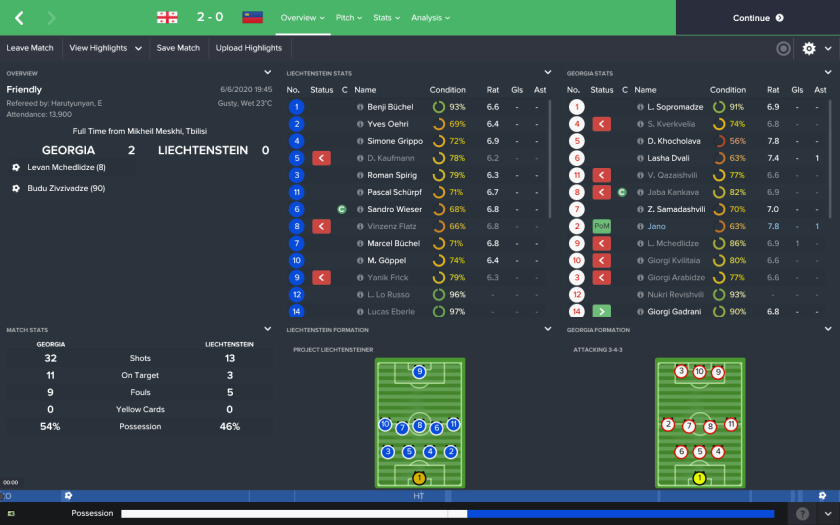 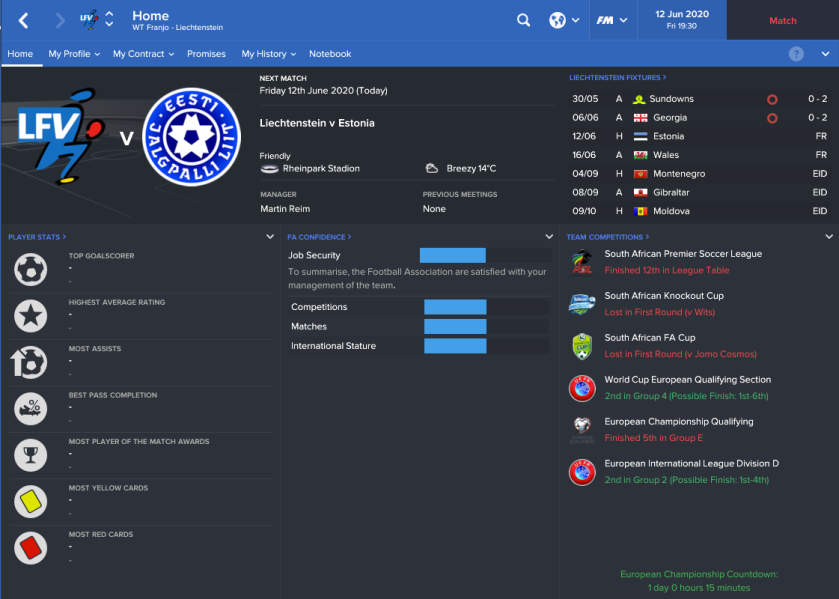 I’m not particularly encouraged by that performance. We’re definitely set up a little bit too defensively and giving the opponents chance after chance to score will almost inevitably end with them doing so at least once. Nevertheless, Project: Liechtensteiner may suit us better against better teams like it did against Denmark and I still want us to keep at it to build familiarity, so we travel back to Vaduz to host Estonia. Perhaps unwisely, I make no changes whatsoever. Much like in Georgia, we get off to a stinker. It takes 13 minutes for a well worked corner to break us, with Pruuli whipping the ball in, Kübar flicking it on at the near post and Laas touching it into the net.

To be fair, we do a much better job today of nullifying Estonia throughout the match. In fact it’s not until 70 minutes have been played that goalscorer Laas slides the ball through for Likvak, who hits the ball very sweetly and sends it crashing off the underside of the bar and in.

Striker Niklas Kieber of YF Juventus comes on for Frick in the last 10 minutes as I continue to try and find someone who can get us firing and a few minutes later Pruuli sees a hopeful shot fly over from the edge of our box, but otherwise that’s all she wrote. 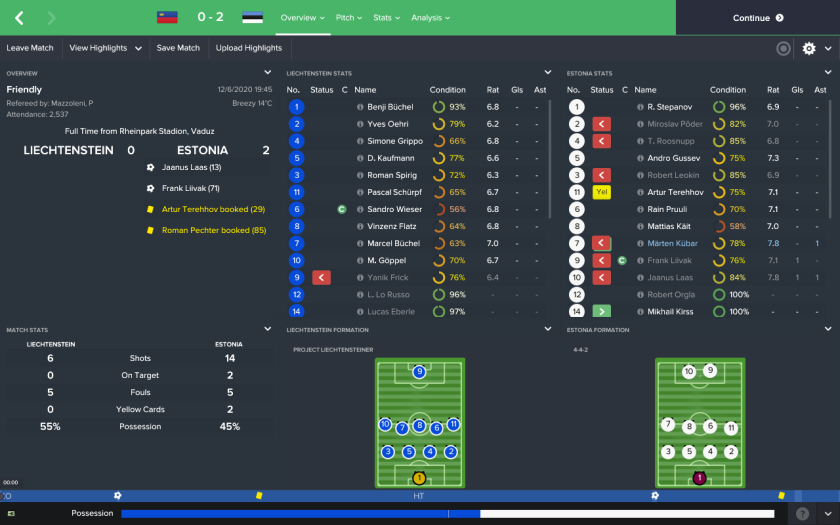 Is it ideal that I’ve now lost my only 4 International matches? No, not really. Is it annoying? Absolutely. Is the annoyance turning into panic? A little bit, yeah, thanks for asking.

I’m now in something of a difficult position. If I stick to my original plan and keep the same lineup and system when we travel to Wales, I run the risk of losing and having to throw everything out before the competitive fixtures because what we have provably doesn’t work, so the familiarity I’ve been working to achieve will disappear faster than a fiver on the steps of FIFA HQ. On the other hand if I abandon the plan and go for something else, we’ll be underprepared and almost certainly lose anyway, so we’ll be in the same situation but with 3 failed systems making everything seem that bit messier.

I decide to make one minor change for our match in Llanelli: Lucas Eberle, vice captain of FC Schaan, the same side that Valentin Flatz captains, comes in replacing Yves Oehri, who really hasn’t impressed me. Otherwise we stay unchanged against a good but thankfully Bale-less Wales side.

I’m actually a little bit starstruck when newly appointed Welsh boss Avram Grant seeks me out for a chat before kick off. This is the first time I’ve gone up against a famous football manager. A former Premier League manager. I jokingly assure him that my team will not be going easy on his, to which he laughs rather condescendingly. He may as well have patted me on the head and ruffled my hair.

That’s it. We’re fucked. My defensive Project: Liechtensteiner is done. As much as I’ve been grasping at straws and trying to make excuses for it, this is the 3rd consecutive match where we’ve gone behind in the first 15 minutes, and this time it only takes 4. Middlesbrough’s Chris Gunter swings a cross into our box for this one, and Fleetwood’s Wes Burns meets it to head the ball into the net. As a defensive strategy you might say that this one’s got some major fucking flaws. I’ll address it after the match though, there’s no point trying to change us 5 minutes in. I stand on the touchline silently, feeling dejected, annoyed, and frankly like I want to chuck the towel in. International football is beating me.

With 25 minutes gone, West Ham’s Aaron Ramsey takes the ball down expertly and jinks past Vinzenz Flatz, before passing to Everton’s Tyler Roberts, who places the ball into the far bottom corner to make it 0-2. We go on the counter attack in the hopes that we’ll be able to put at least a couple of attacks together.

Alas just 10 minutes later, Burns takes the ball down the right wing and crosses it to the far post, where 17 year old Tommy Burns arrives to put the final nail in our coffin with his first International goal, despite not even having made his Premier League bow for Manchester United yet. Yanik Negele and Swiss amateur side SV Muttenz’s defensive midfielder Thomas Eggenberger come on for us in the second half, but that’s it. 270 minutes of International football and we’ve lost 3, scored 0 and conceded 7. 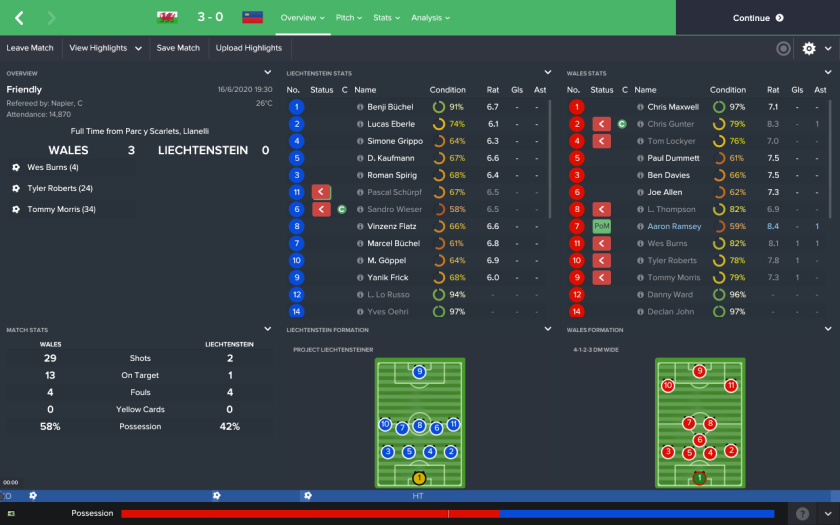 I think the match really affects Avram Grant. He clearly feels bad enough about thrashing my poor defenceless Liechtenstein side that he retires from Management altogether just a few days later, after only 73 days as Wales boss. I’d like to say that I know how he feels, but I don’t. If everybody in history had quit every time they wanted to, the human race would still be living in wooden huts. If you want your house to stay standing, you’d better dig foundations. If you want your walls to stop falling down, you’d better get some cement and stick them together brick by brick. If you want your roof to stay on, you’d better make sure it’s properly supported, and if you want to qualify for a major tournament with Liechtenstein you’d better get the fuck back to the drawing board.