We may well have unearthed one of the best young talents in the league. 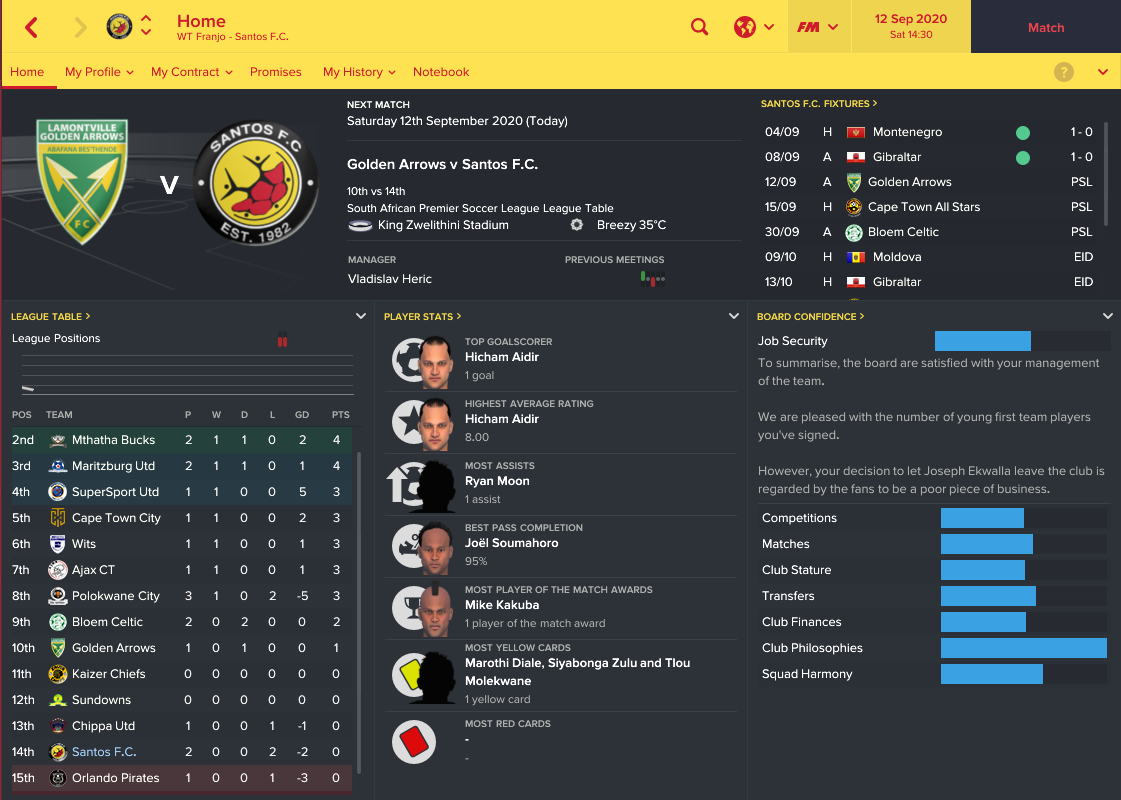 I step onto the Santos team bus to a cheer and a round of applause. “Thank you, lads, thank you.” I say with a smirk. The lads were obviously paying attention over the International break, with the possible exceptions of Sony Norde, Mike Kakuba and Hicham Aidir, who were on duty with Haiti, Uganda and Morocco Under 20’s respectively. I’m feeling fucking unstoppable after Liechtenstein’s double win over Montenegro and Gibraltar and I want to instil that attitude in the players so that they can go into our away match against Golden Arrows today full of confidence.

In an odd scheduling choice, 2 teams in the league haven’t even kicked a ball yet while Polekwane City have played 3 times, we’ve lost twice and Golden Arrows have picked up a single point from their single game. I understand when this happens after different length cup runs and what have you, but it’s considerably less justifiable at the start of the season! 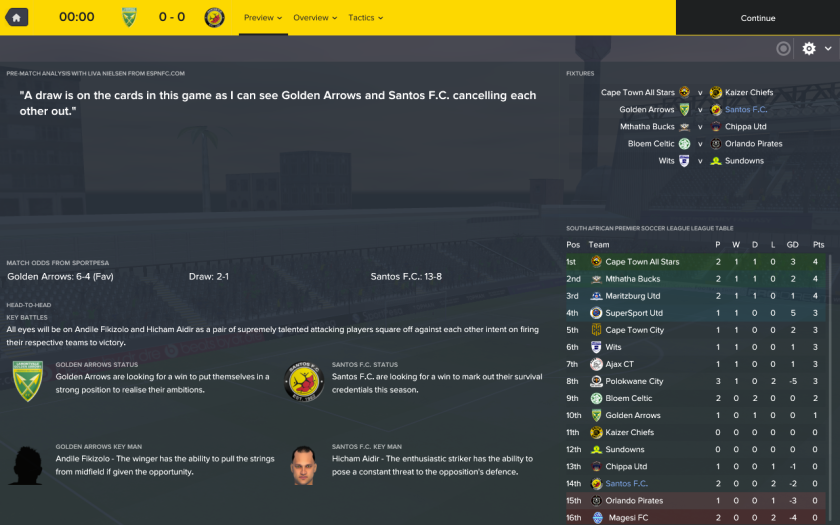 We of course are trying to bag our first points of the season, but Golden Arrows actually sneaked into the top half of the league last year so they aren’t to be underestimated. I decide to go with our more solid system: Project: Foxy Mk II, but I’m keeping most of my team from the first 2 matches together with the exception of Hicham Aidir, who after opening his account for the club on his debut will make his first start up front in place of King Carl.

4 minutes in Golden Arrows threaten when Buthelezi dribbles to the edge of our penalty area, but he fires a shot straight at Komo who’s able to catch the ball easily. After 25 minutes we’re getting fairly well dominated, so I tell the lads to retain possession to get us a foothold in the game.

Less than 10 minutes from half time, Dube chips the ball to Ngidi, again on the edge of our box, and he controls the ball calmly before lashing it into the bottom corner. After taking a moment to shout a few choice words in frustration, I obviously bring out the Meatloaf.

At half time we’ve still not managed to find a foothold and frankly our performance has been shocking. We’ve scrapped and picked up a few yellows, which I don’t mind, but we’ve not created anything at all and we’ve not been able to keep the opposition out. I save half time triple substitutions for special occasions and this seems like as special an occasion as any, so on come Joël Soumahoro and debutants Ayanda Nkili and Isaac Sohna. Off come Tlou Molekwane, Roscoe and Sony Norde. We keep the Meatloaf train rolling.

With half an hour to go we go on the attack, but I think I can see where this is going: Another crawl to the finish line and another frustrating narrow defeat. Except I’m wrong. Right after I give the order to attack we win a free kick 30 yards from the Golden Arrows goal. Masango takes it and his shot isn’t especially good, but the keeper Gumede has a shocker – He spills the ball right in front of Joël Soumahoro, who nips in and scores the easiest goal he’ll ever score. That’s another newbie off the mark and suddenly we’re looking good.

We have a spell of dominance after the goal. It’s sparked us into life and if anything, we’re looking the more likely team to score again. We take it right up to the wire. With 4 minutes to play, Masango switches the ball brilliantly across to the right wing for Moon, who cuts it inside for Joël again. He surges forwards, leaves 2 defenders crying big golden arrow-shaped tears in his wake and pokes the ball past Gumede to put us ahead. Joël sprints straight over to Hicham Aidir, with whom he’s formed a close friendship after they both arrived from overseas at the same time. Out of nowhere, Santos have fought back, we’ve won, we’re off the mark for the season and we may well have unearthed one of the best young talents in the league.

I bloody love Goolam Allie. It’s only been a few weeks since I completed my National A license but when I cheekily request that the club fund my Continental C license studies he’s straight on board. “The better you are, the better we’ll be” he smiles as he writes the cheque. I laugh politely, feeling quite guilty as I’ve not yet thought about where I’ll be after this season.

Cape Town All Stars at the Athlone are up next, but before that we have the draw for the South African Knockout Cup First Round. We get Mthatha Bucks away, which should be winnable. We did the double over them last season with a pair of 1-0 wins courtesy of Ryan Moon and King Carl, so I’m quietly confident. 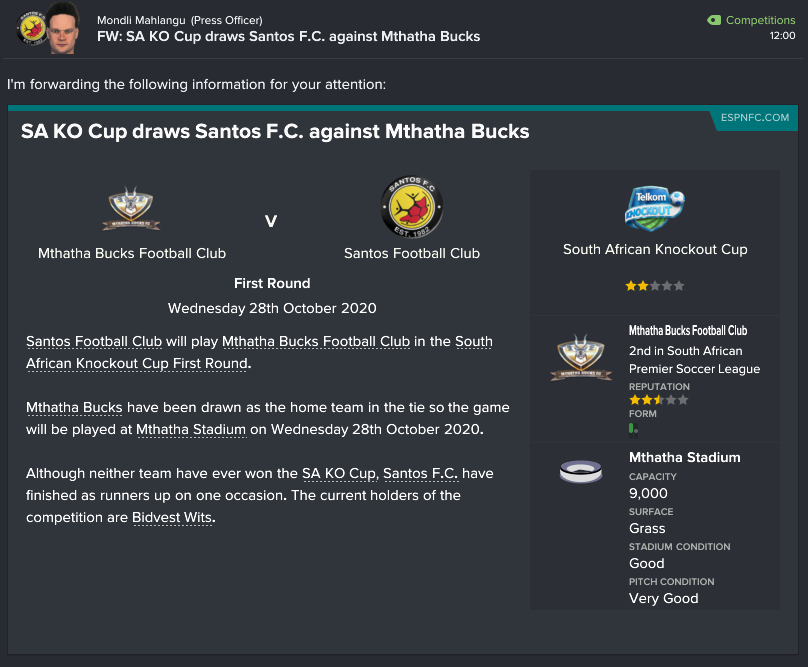 Away from South Africa though I get a bit of sad news. Having been a free agent for a year, Simon Kühne’s decided to call time on his playing career at the tender age of 26. I feel for him of course. I know how tough it is as a manager when no club wants you and I imagine it’s even worse when you’re a player in your mid 20’s and you can only watch your short career tick away. On the other hand though, he got a bloody match winning assist in Liechtenstein’s EIL match against Gibraltar! He definitely had more to offer us. Kühne’s mind is made up, but I give fellow free agents Yves Oehri, Vinzenz Flatz and Guillaume Khous a call and offer them the chance to train with Santos. If I can keep them sharp in the reserves it might help them find a club and prolong their careers. To the Cape Town All Stars match then, and as we’re the home side and they’re one of the relegation favourites I’m bringing out the Meatloaf once again. Nkili, Sohna and Soumahoro all come into the starting lineup after their impressive substitute appearances last time out replacing Molekwane, Roscoe and Norde. 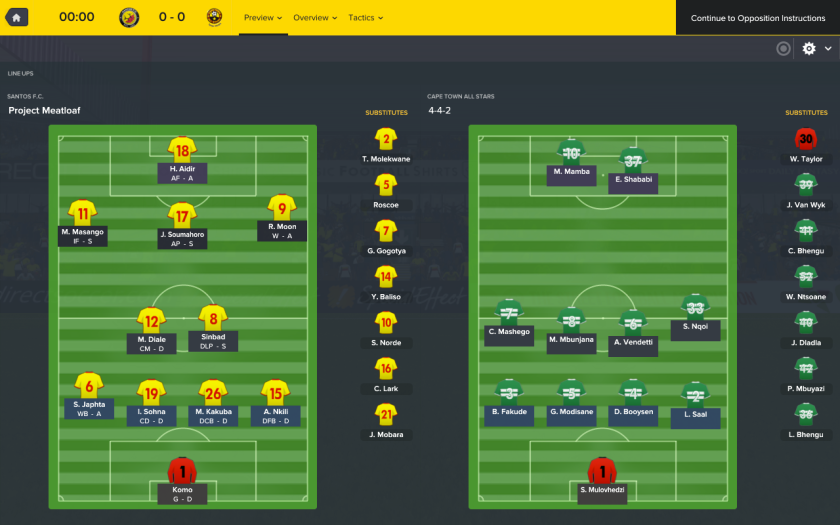 We come out of the blocks fast, playing some brilliant fluid football. Almost 20 minutes in one particularly impressive counter attack culminates with Hicham Aidir holding the ball up and playing in Masango, who rolls it into the far bottom corner for 1-0.

The All Stars get a chance to level the scores 5 minutes from the break when Mamba chips the ball through for Mbunjana, but he mishits his shot on the volley and it flies wide. Seeing them starting to come back into the match, we pull back to a more standard mentality. A couple of minutes later though Mandla Masango repays the favour for Hicham Aidir, laying the ball off for the Moroccan to drill it into the bottom corner of the net, doubling our lead.

After an hour they do pull a goal back after a Mashego corner is headed down by Bqol and stabbled in by substitute Bhengu. I send out the order to retain possession. We should be able to kill the game off at this point if we can just pass the All Stars to death before they manage to build up any kind of momentum.

10 minutes later I replace Kakubu, who’s tiring after his recent run of matches that included a couple for Uganda while everyone else was resting. Roscoe comes on to help us shut up shop. Baliso also comes on replacing Ryan Moon, who’s not convinced so far this season, and goes onto the left with Masango taking the right.

With 15 minutes to go Mashego creates another chance, this time sliding the ball through for the goalscorer Bhengu, who’s looking lively. He snatches at his shot though and sends it soaring over the bar. We revert to Project: Foxy Mk II and eventually manage to see the game out at 2-1.

Not really a controversial view, but I think the best way to build momentum is by getting results. They don’t need to be pretty, they just need to put points on the board. Points bring confidence, confidence brings performances and performances bring more results. We weren’t as convincing as I would’ve liked us to be today but we got the win. Masango’s off the mark and Aidir’s bagged his 2nd goal for us. Slowly but surely Santos are building momentum, and I’m pretty fucking excited to see what happens when this team has momentum.