Am I irresponsible with money? I’m genuinely asking. Not because I went out into Cape Town last night with some of my coaching staff and spent a week’s pay (I blame my assistant Jakub. I need to stop drinking with the Polish, the ones I’ve met can handle 10 times the amount of alcohol I can, but then so can some children), but because I started Summer 2020 with 2 decent centre backs in Eliphas Thoahlane and Gary Havenga and as soon as the transfer budget started burning a hole in my pocket I went out and signed 3 more. I reckon Eliphas and Gary are now 4th and 5th in the pecking order respectively and I feel a bit bad, so it’s with a pang of guilt that while nursing the mother of all hangovers I sign Havenga’s loan deal that’ll see him move to our affiliate club Zizwe United. He’s still young so you never know, if he gets some first team football under his belt, does well and improves he could still have a future with Santos. Good luck, Gaz.

It makes my headache just a little bit more intense when I learn that Hicham Aidir, the striker that’s scored 4 goals in 4 games for us so far, suffered a strained wrist on duty with Morocco U20’s and will be touch and go for our next match. What match, you ask? Oh, only Kaizer Chiefs at home.

I’m pretty fed up of Kaizer Chiefs, with their multi-million-pound transfer budgets, their legendary South African goalkeeper Itumeleng Khune, their big money shirt deals with Nike and Vodafone and their smug, self-satisfied faces, laughing as they spit down on us from their ivory tower made of trophies and silver spoons… And ivory, I suppose. Kaiser Chiefs are Goliath and we are David, and if we pull out the right slingshot I know we can knock them on their arses.

Luckily, Aidir does make it back just in time for the game so he’ll start up front and hopefully pick up where he left off with those 2 goals against Bloem Celtic. Molekwane, Sohna, Japhta and Masango are all in too in place of Nkili, Roscoe, Zulu and Norde as we line up at the Athlone and Project: Meatloaf is my chosen system, which will either be looked back on as a very brave decision or a very foolish one.

With 12 minutes gone, Ngoma’s whipped corner causes problems for Japhta at the near post and he fails to clear the ball. Harrison latches onto it and squares across the face of goal for centre back Siyanda Xulu, who tucks it away from point blank range. Oh dear.

Kaizer Chiefs continue to dominate and come close to a second after 25 minutes when Mphahlele’s cross is headed towards the top corner by Ngoma. Captain Komo saves it brilliantly with his finger tips, redirecting the ball against the post, and Tashreeq Morris is lurking as it trickles back across the face of goal but luckily he’s flagged as offside by the lino.

When the second goal does come 2 minutes before half time, it’s from another Ngoma corner. This time he floats it to the far post where Mkhwanazi is waiting to power it home. Komo gets a glove to the ball but can’t keep it out.

To be fair we do better after half time, in that we do actually manage some shots but none of them hit the target. Ryan Moon is on thin ice now after another anonymous performance and is replaced by Yanga Baliso, while Carl Lark replaces Aidir.

The away side finish us off with 15 minutes to go. We defend valiantly and stubbornly after their free kick is launched into the box, but several failed crosses later the ball falls to Khutlang on the edge of the box. He has ample time to take the ball down, pick his spot and take the shot and still cannons it straight at Marothi Diale, but Komo is left wrong footed and the back of the net ripples for the third and final time. It’s another comprehensive loss against last year’s Champions. 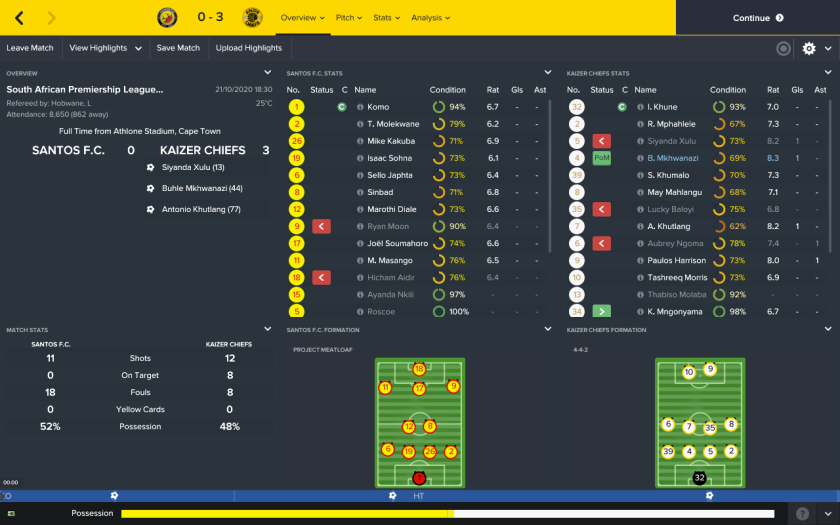 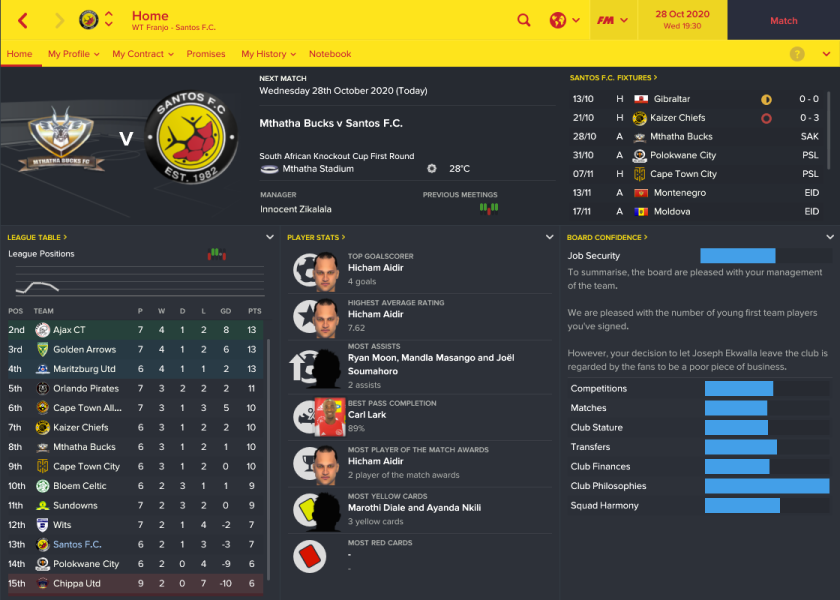 We may have now lost half of our 6 league games, but in all fairness this was the first one where I felt like we didn’t deserve to win. In the interests of immediately getting back on the horse though it’s time to turn our collective attention to the first round of the South African Knock Out Cup, a competition in which Santos have not won a match in 2 years. Woohoo. Mthatha Bucks are our opponents and we’ll travel to their place as we bid to better last season’s record of shitting the domestic cup bed at the first opportunity.

Mthatha Bucks are a team that I’ve been looking forward to playing actually because last year we squeezed past them 1-0 twice in 2 extremely even matches. A solid win today would make me confident that I’ve taken this team in the right direction over the Summer.

We line up cautiously with Project: Foxy Mk II and I make a couple of personnel changes: Siyabonga Zulu and Yanga Baliso will give us solidity at the back and width further forwards down the left wing and Roscoe comes in as I continue to try and figure out my best central defensive partnership. Japhta, Masango and Sohna make way. 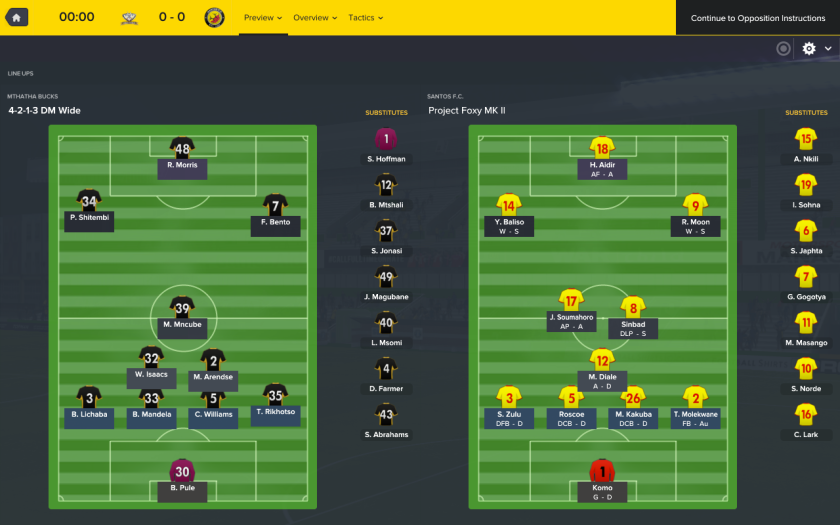 The start of the match is predictably cagey; Scrappy football and limited chances in an even opening stage. With 23 minutes played though Baliso receives the ball on the half way line and shoots down the left touchline like a bullet from a gun. When he gets level with the penalty area he swings a cross in and the keeper rushes out to the centre of the 6 yard box to claim it, but Hicham Aidir rises at the near post to nod the ball into the empty net and score his 5th goal in his first 6 games.

Chances continue to be at a premium throughout the game as Mthatha Bucks carefully poke and prod to try to find a way into the match. With 20 minutes to go, I bring on Nkili, Gogotya and Lark in place of Molekwane, Sinbad and Aidir. All 3 need match fitness and now seems like a good time for them to get it.

With 16 minutes to go however I’m left red-faced when Isaacs is left un-oppressed 25 yards from our goal and like Khutlang in our last match he has about 10 minutes to prepare his shot and ends up blasting it against Mike Kakuba. Shooting straight at our players continues to be a good strategy though as Komo is again caught wrong footed by the deflection and the ball flies into the net. I have no subs left and we’re all square. I may have shat the domestic cup bed once again.

A few minutes from time we’re on the back foot as the hosts push for a winner, but Jonasi’s tame shot ends up in Komo’s arms and we counter. Soumahoro takes the ball just inside the opposition half and spots King Carl running into space behind the defenders. A perfect lobbed pass ensues and Lark’s left one on one with the keeper Pule, but Lark’s shot lacks power and Pule pushes it away to safety.

As the whistle blows after 90 minutes I get a sinking feeling in my stomach. Extra time and possibly penalties await now. Tireder legs and possibly a third consecutive cup game without a win, and I can’t help feeling it’s my fault with that bloody triple substitution. I should’ve seen the game out with the players that started. That’s what I’d normally do at 1-0 in an even game. Don’t rock the boat, don’t tempt fate, don’t fix what isn’t bloody broken. It’s done now though and we’ve got to deal with it. It doesn’t help matters though that Baliso takes a 90th minute knock to the chest and seems to be struggling, but he plays on.

5 minutes into extra time our well worked free kick routine ends up finding Joël Soumahoro inside the box, but his shot is straight into Pule’s grateful arms. The match starts to become a physical endurance test after that with both sides tiring rapidly. Lines become stretched, the ball’s given away sloppily by both teams and arguably the best chance is Yanga Baliso’s looping 35 yard pot shot that Pule back-pedals to catch.

My eyes keep flickering over to the clock. 113 minutes… 114… I’m not sure if any of these players can even take a penalty… 115… 116… Who do I trust? Sinbad can take one, surely. King Carl and Ryan Moon too, despite their form… 117… 118… 119… 120… The clock ticks past the 120 minute mark but the referee’s whistle doesn’t blow. We’re into extra time injury time. Nkili throws the ball in from the right… Gogotya plays it on for Soumahoro… Joël hits it first time…

The next thing I know, I’m face down in the turf. Jakub Kalinkowski’s over-exuberant celebration has knocked me clean off my feet and I’ve face planted into the grass. I get back to my feet laughing as I’m mobbed by the Santos players and coaching staff. There’s no way Joël will be credited with that goal, such was the magnitude of the ball’s deflection off Brian Mandela on it’s way into the bottom corner of the net, but I doubt he’ll care. I certainly don’t. His shot could’ve catapulted up into the air and been bicycle-kicked in by a passing Stork for all it matters to me. All that matters, and all that ever matters in this beautiful game, is that the ball crossed the line.

The final whistle goes straight after kick off. Santos FC have won a Cup Match for the first time in 2 full years – And it feels fucking great.