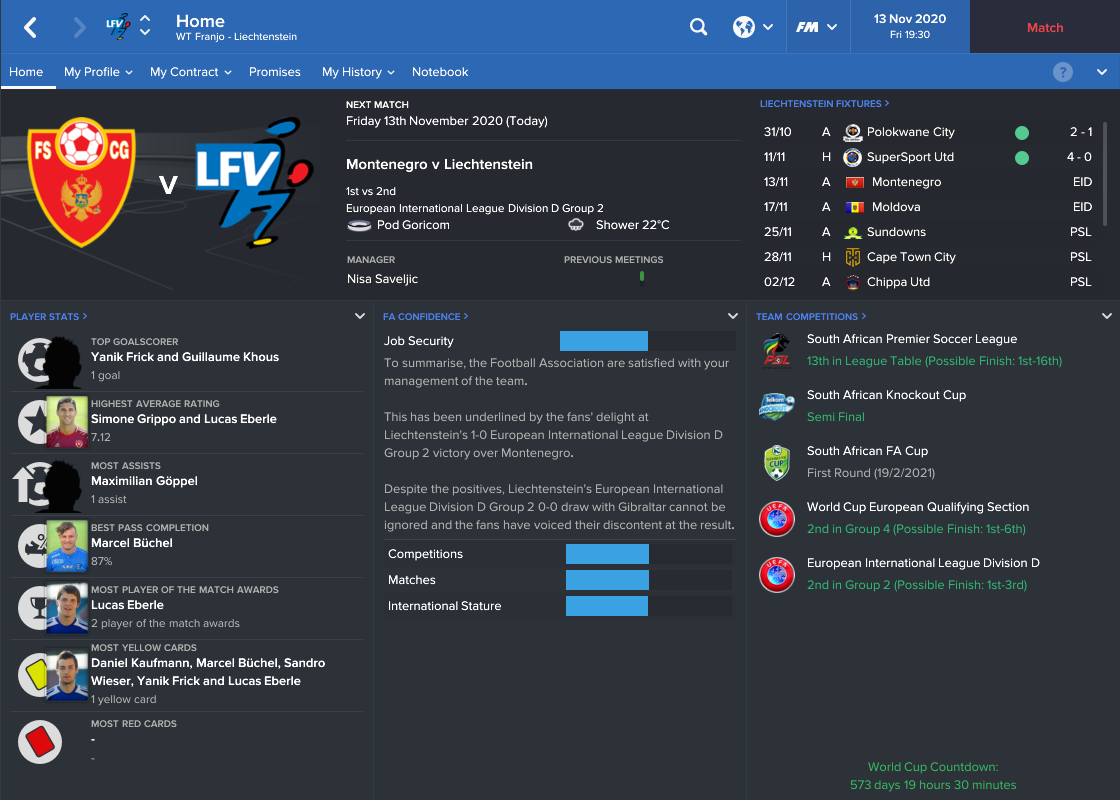 We’ve lost another one, I think, letting out a long sigh. Long serving Liechtensteiner right back Yves Oehri has retired from professional football after his extended period of training with Santos. It’s a little easier to stomach than when Simon Kühne did the same because for one thing Yves is 33, 7 years older than Simon, and for another he’s… Well he was… He wasn’t my first choice right back. Let’s leave it at that. Nevertheless there’s definitely something to be said for having experience in your squad and as our most capped player with 70, we’ll miss Yves. Incidentally, Guillaume Khous and Vinzenz Flatz are both still training with Santos to dissuade them from following suit.

Speaking of experienced Liechtensteiner players, Sky Sports have stuck the boot in in the build up to our crunch EIL visits to Montenegro and Moldova by suggesting that Sandro Wieser should be dropped because of his club situation. To be fair though he’s in the unenviable and slightly embarrassing position of not being able to break into a Wycombe Wanderers side who’re sat dead last in League One, so I do see their point. I’d like to know who Sky Sports would pick instead though.

And it certainly won’t be Yanik Negele, the light at the end of the tunnel for Liechtensteiner football. The 19 year old midfielder slipped a disc playing for Vaduz U21’s and will miss another 6-7 weeks. 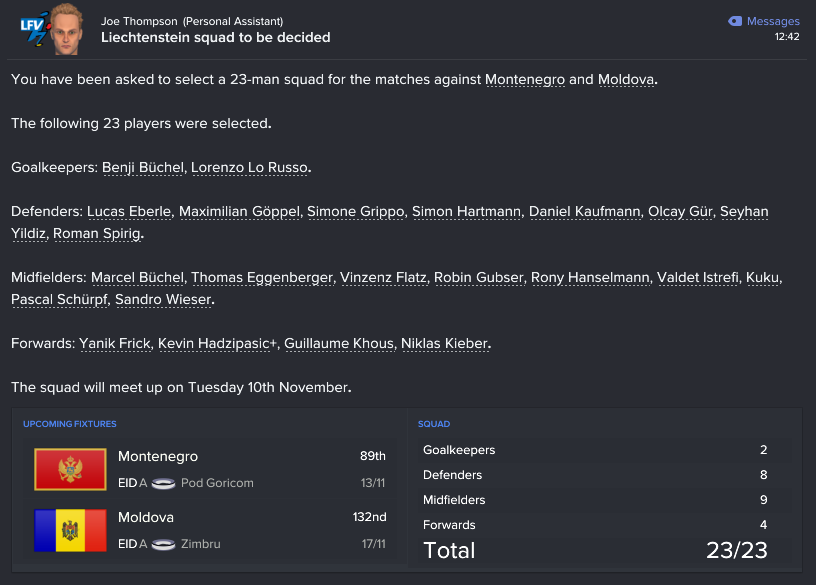 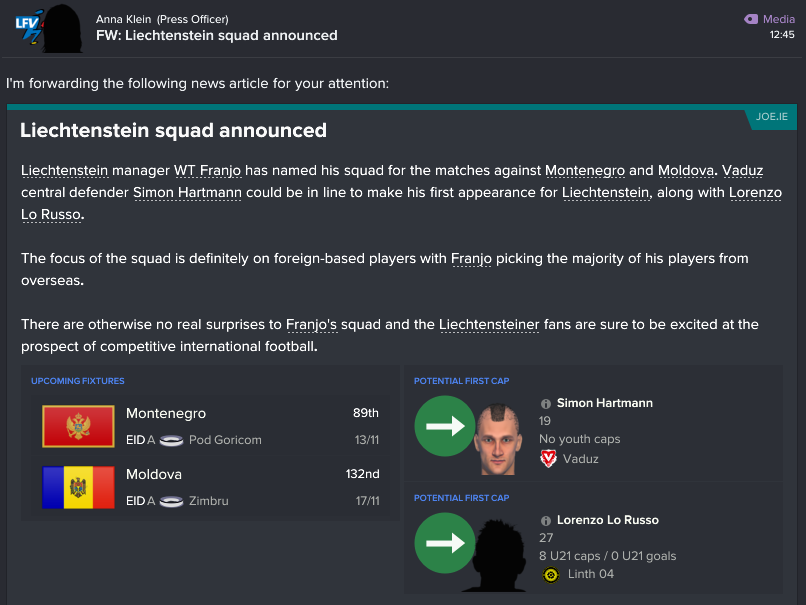 I sit alone for a few minutes in the corner of Pod Goricom’s away changing room. I’ve had a twisted feeling in my stomach about this match for a good while now and with kick off looming I’m not really sure how to feel. We currently sit, and please don’t think I’m not fucking elated with this, in 2nd place in our European International League table. Gibraltar are out of the running for promotion in 4th, having picked up only the 1 point that we gifted them. Moldova, Tuesday’s opponents, are in 3rd with 6 points and we’re just 1 point higher with 7. Montenegro lead the way unsurprisingly with 9 points, meaning that we’re the only ones who can stop them from gaining promotion at all of our expense. We beat them in Vaduz, however lucky it might’ve been, and if we don’t do the same at their place today, they’re almost guaranteed to go up. After our next 2 matches we could finish above only the whipping boys of Gibraltar in 3rd, be the “best of the rest” in 2nd, or get promoted in 1st. It’s up to us. It’s all up to us. We’ll set up today in a counter attacking variant of Project: Liechtensteiner Mk II, the system that’s served us reasonably well so far, while Max Göppel comes in for Spirig at left back, who’s carrying a knock. Kuku replaces Negele in midfield. The full lineup is Benji Büchel in net, Lucas Eberle, Simone Grippo, Danny Kaufmann and Max Göppel in defence, Marcel Büchel, Sandro Wieser and Kuku in midfield, with Pascal Schürpf, Guillaume Khous and Yanik Frick across the front. In optimistic news, star centre back Stefan Savic is out injured for the hosts. 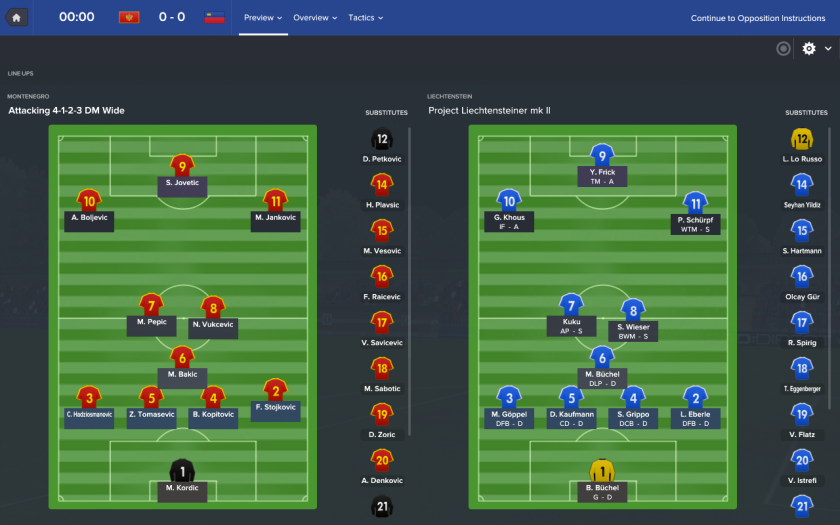 5 minutes in Marko Jankovic goes close for Montengro with a dipping 25 yard shot that skims the bar. Just 12 minutes later though they do take the lead when an extremely complicated and intricate short free kick routine is finished by a stroked finish by Boljevic which finds the net.

We go defensive after that to try and stop any build up of momentum by tightening up at the back, but it’s no use. 10 minutes later a Stojkovic corner is nodded down by left back Cristian Hadziosmanovic and volleyed calmly home by Stevan Jovetic at point blank range.

5 minutes pass before our next piece of bad news, which is a damaged foot for Pascal Schürpf. He plays on though. Montenegro seem happy to knock the ball about patiently between themselves after that, although they do counter from our corner just before half time. Boljevic has a chance to bag a second goal but shoots right into the arms of Benji Büchel.

I’d like to say that we fight back in the 2nd half. That we show some spirit or desire or catch the complacent favourites with some slick counter attacks. We don’t though. 10 minutes in, Pepic plays a long ball over the top and Jovetic leaves Kaufmann for dead, before firing under Benji and into the bottom corner. Gubser and Hadzipasic come on, but can’t make an impact as the match ends 0-3. If they can get anything from their final game away at Gibraltar, Montenegro will be promoted. Liechtenstein are mathematically out of the race. 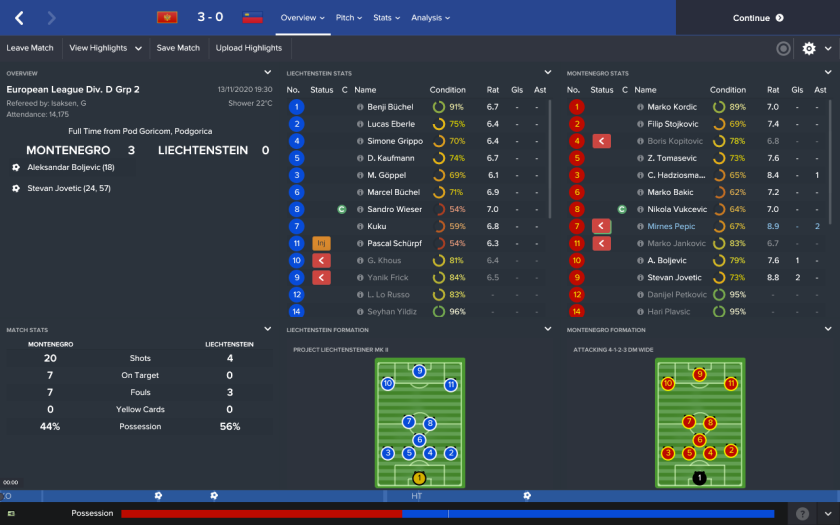 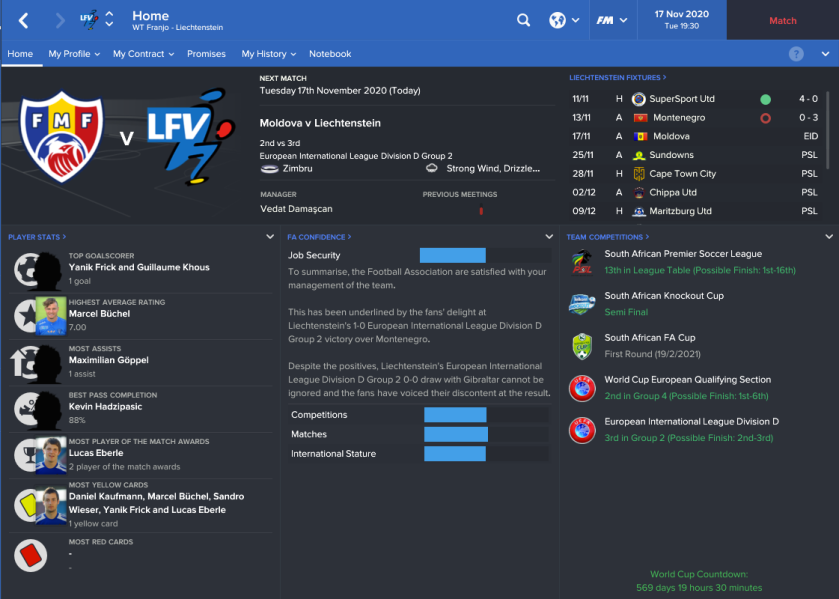 “Shit”, I say to my hotel room wall later that night. “Fucking shit.” There’s an odd hollowness that comes with failing in International football. If you lose a cup match in club football it can hurt, but you know that as long as you can stave off the sack for another year, you’ll just be able to try again next time. The next European International League competition isn’t until the 2022/23 season though and God knows where I’ll be by then. The optimist in me says that we’ll qualify for the 2022 world cup and I’ll still be riding that high with Liechtenstein, but the pessimist and the realist… They both say something different.

We may as well wrap this up though. Moldova have moved 2 points above us into 2nd place, having beaten Gibraltar 2-0 away. They’ll stay 2nd unless we beat them. Pascal Schürpf’s had to withdraw from the squad as his damaged foot will keep him out for 3 weeks, so 19 year old uncapped Vaduz winger Christian Quaderer is called up in his place. He looks OK – An aggressive and influential team player with a decent work ethic, but he’s not too quick and pretty questionable on the ball. 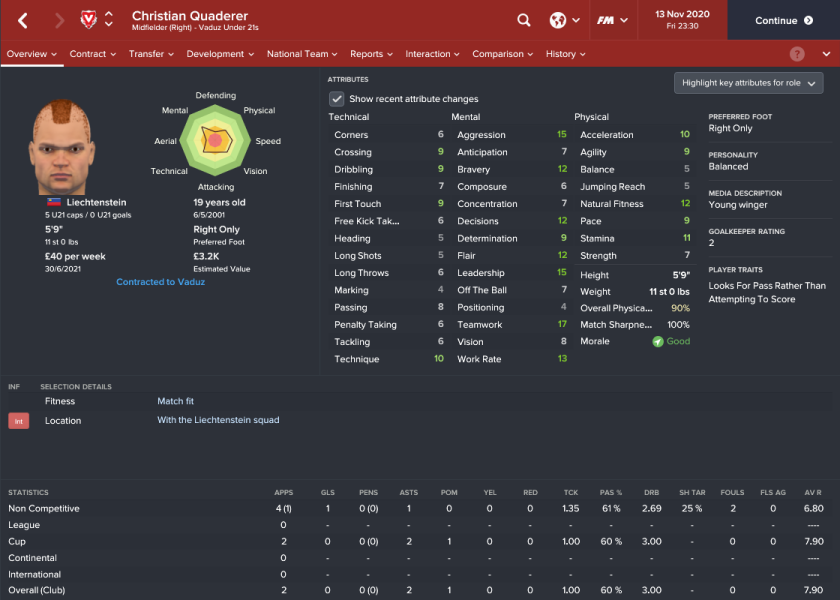 I’ll be honest though I don’t have too many options and with no real stakes, this seems like a decent match to give young Christian a try. He comes in on the right wing and Khous drops out to be replaced by Roman Spirig, who’ll play at left back, allowing Max Göppel to take the left wing. It makes sense to have 2 out and out wingers to use as outlets as we once again try a counter attacking variant of Project: Liechtensteiner Mk II. 17 minutes in, Faruk Özkan swings in a corner from the right hand side. The ball drops into a scramble 3 yards from goal and striker Alexandru Boiciuc’s on hand to stab in the opening goal. I scream for a response from my players, but less than 2 minutes later Boiciuc lays the ball off for Oleg Turea, who drills it into the bottom corner to make it 0-2. We go standard and exploit the flanks, but I can’t help feel that we’re done here.

The score remains 0-2 at half time, but I have no words of encouragement to give. I’m so fucking angry at the way this last few days has gone that I leave the team talk to my assistant André Ooijer.

I don’t know exactly what André says but just over a minute into the second half it’s 0-3. Faruk Özkan’s cross from deep on the right makes Benji Büchel come charging out to claim it, leaving Postolachi to simply pull away from his marker and nod the ball into our empty net. Before the 50 minute mark, it’s 0-4 when Faruk Özkan’s drilled cross flicks off Marcel Büchel’s heel and trickles across the line.

I decide to tell my team to defend to try to keep the scoreline barely dignified and bring on Hanselmann, Gubser and Hadzipasic for the last half hour. Rony Hanselmann is a pretty unimpressive 29 year old winger currently plying his trade for Triesenberg. He’s not played under me so far, but Quaderer’s not really cutting the mustard so far on his debut, so what the hell. 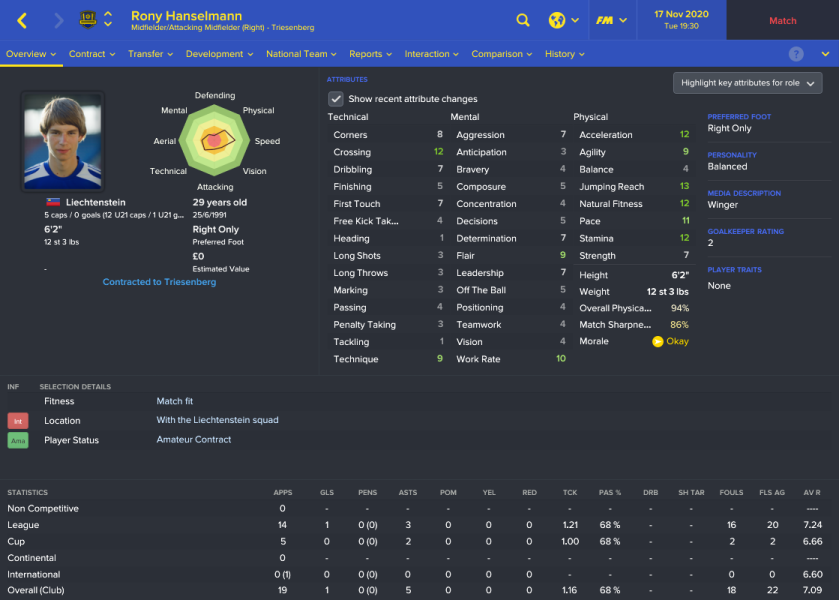 Hanselmann puts in a pretty anonymous performance, but to be fair, Gubser does well to get down the left wing and drill a cross in for Kevin Hadzipasic, who grabs us a consolation goal from just outside the 6 yard box. We’re finishing this EIL campaign with a whimper though. 1-4 the final score. 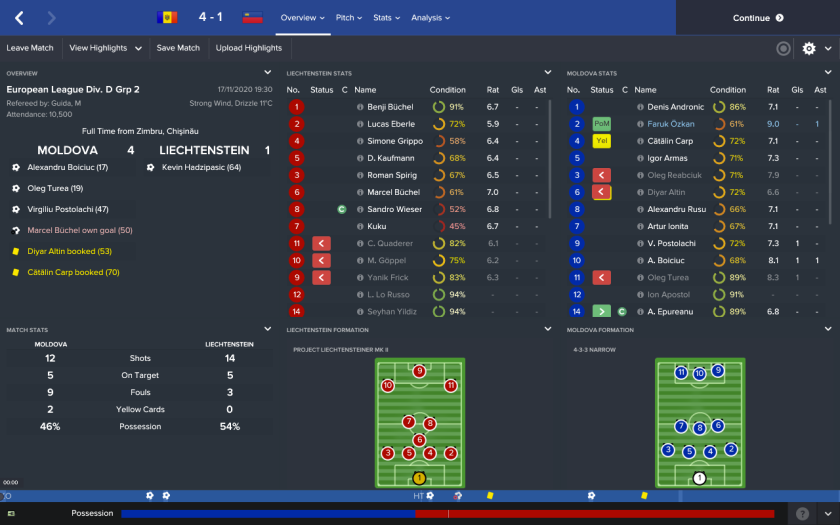 Up until this International break I was secure in my management of this team. Yes we weren’t scoring many, but we weren’t conceding either, which made the lack of goals OK. After 7 goals in 2 matches though I spend the long flight back to Cape Town scratching my head trying to come up with any positives at all.