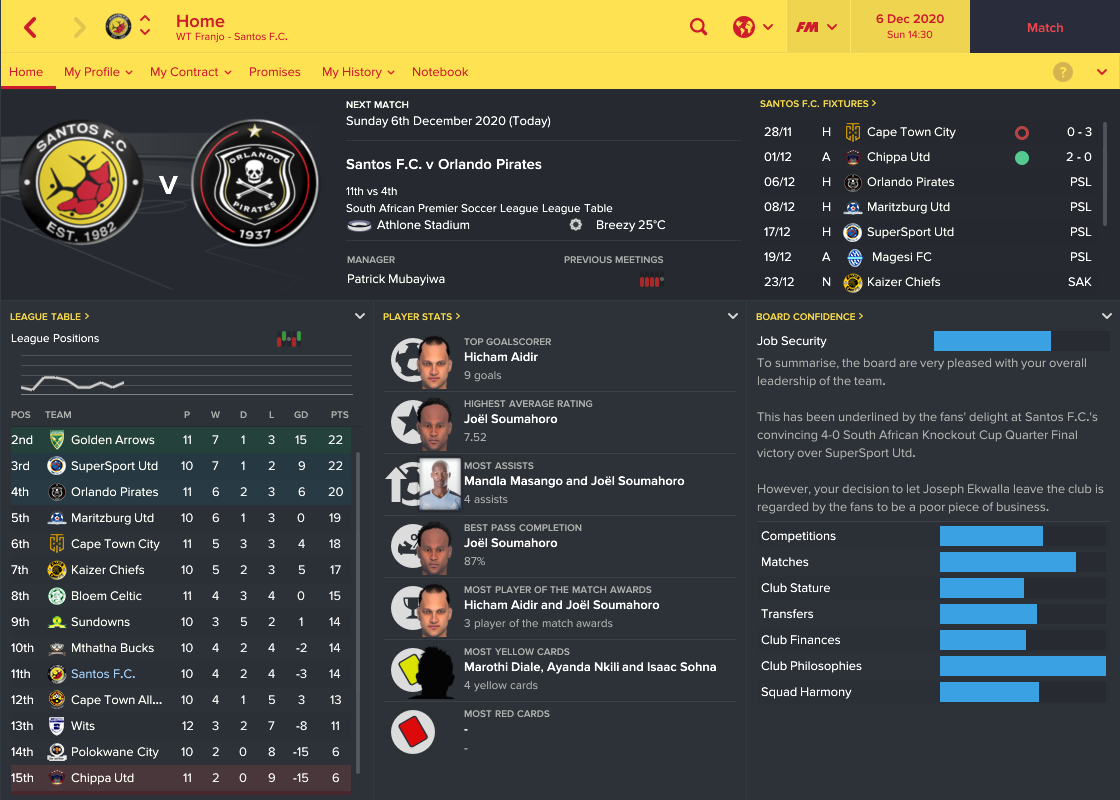 “Alexa, who do Santos FC play next?”

Well fat lot of good you are in the South African Premier Soccer League, eh? I think, absent-mindedly stroking Burnie, who’s asleep on my lap. I got an Amazon Dot as a gift a while back and it’s one of those things that I’ve not as of yet found a practical use for. Like Yanga Baliso. I do giggle a little too much for a grown man when Alexa ‘surprises’ me with a message like “You are cool” that I’ve specifically told her to say at a specific time like some kind of hi-tech daily affirmation, but apart from that I’m still thinking of things to do with her.

The dot starts emitting cat noises and Burnie leaps to attention to find the source of the noise, joined a second later by Meatloaf. That should keep them busy for a while at least while I sort out what on Earth I’m going to do for this game. I know who Santos FC are playing next of course. I wouldn’t be much of a Manager if I didn’t at least make the effort to remember things like that, but it’s not a match I’m looking forward to overseeing. Orlando Pirates are coming to town. The 2 matches we played against them last season finished 0-4 and 1-1 so they’re still very much a side that I’m figuring out. Mind you, despite our patchy form I’m positive that the squad at my disposal now is far greater than it was on those occasions.

Unfortunately, Hicham Aidir picked up a nasty bruise on his bonce in the Chippa match so he’ll miss a few days with that, ruling him out of starting contention. I’ll also be without Isaac Sohna and Marothi Diale, who’ve both picked up 1 match suspensions after accruing 4 yellows each. A shame, since I promised Pirates midfielder Joseph Ekwalla that the next time I saw him I’d be telling Diale to sharpen his studs and aim for the knee. Also added to the pre-existing injuries to Roscoe, Thoahlane and Gogotya, we’re actually a bit light on numbers defensively. We’re a stretched squad. 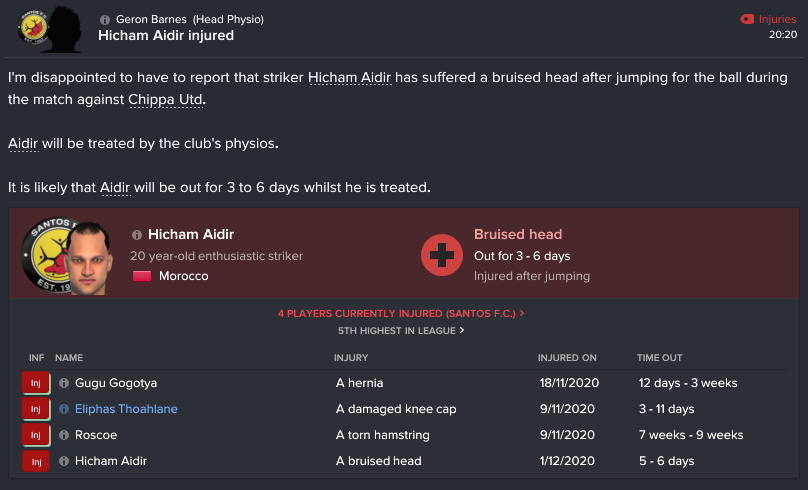 Juno doesn’t get a lot of first team chances as he’s still a work in progress, but he gets the nod to go into defence next to Kakuba for this one. It’s obviously not ideal as he’s a natural holding midfielder, but he’s getting a chance all the same and I only he hope he grabs it with both hands. Starting in place of Diale in midfield will be 16 year old Luke Fanteni. There’s no doubt he’s got talent but he’s still lightweight and extremely raw. Thanks to a lack of alternatives though, he too will have a chance as the playmaker in midfield while old trusty Sinbad takes over the more defensive duties. Coming in for our Moroccan goal machine will be King Carl, who still has yet to find the net in his 7 outings this season. I think his confidence is starting to majorly suffer as a result so a goal today would be extremely welcome. Let’s not forget that this is the same striker that scored a club record number of goals last year. As expected, Joseph Ekwalla starts in the centre of the Pirates’ 4-4-2 and we actually draw first blood against him inside the first minute when he loses Soumahoro and allows him to find Sony Norde just outside the box, who’s fouled by Petersen. Juno, renowned in the youth team for his set piece prowess, smashes the free kick from 20 yards and hits the bar. The ball bounces back into the danger zone and is hit by Sinbad, but Jele gets a block in and sends the ball out for a corner, prompting an expectant roar and round of applause from the home fans. Unfortunately the corner comes to nothing, but it’s a good start for the People’s Team.

The first half isn’t what I’d describe as action-heavy. In fact not a single chance of note is created until just after half time when a great Orlando passing move ends with Norodien crossing from the left byline and Baloyi testing Komo with a decent header, but Komo catches the ball without difficulty.

Joseph Ekwall’s substituted after an hour. He’s played fine; no fireworks or fuck ups. It’s a bit of an anti-climax if I’m honest. With 20 minutes to go Joël’s caught in possession and the Pirates counter attack down the right with Baloyi, who loses Japhta and sends a cross in for Ndoro at the near post. He heads the ball at goal from 6 yards out but somehow hits the post. It’s a lucky escape for us. Soon after I bring on Ryan Moon and Hicham Aidir for Norde and Lark. Aidir’s not fully fit but he’s still got a better chance of scoring than the once again ineffective Carl Lark. A blindfolded Tony Hibbert would be given shorter odds for finding the net at the minute.

With 7 minutes to play, Masango lays the ball back for Fanteni, who plays a lovely lobbed pass to Japhta, who’s exploding down the left side of the box. Japhta takes the ball down and drills it into the mixer – It deflects off the foot of Orlando Pirates centre back Nyauza – And comes back off the post. Bloody hell.

It doesn’t cheer me up one bit 2 minutes later when Matlaba plays the ball inside for teenage substitute Omar White who turns, shrugs off Juno and places the ball beyond Komo’s fingertips and into the top corner of our net. Shiver me timbers. Orlando Pirates have won it at the bloody death. 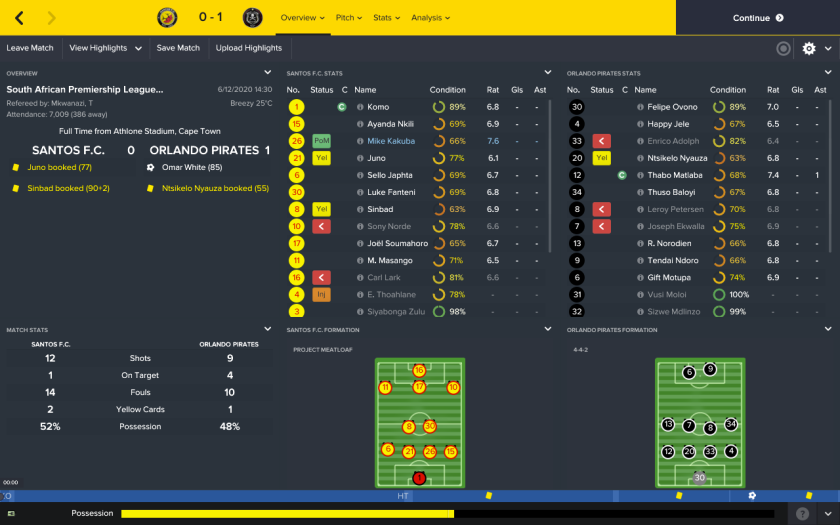 It always hurts to concede so late and to lose so late. It’s one of those moments that you need to get past as quickly as possible. Today was Orlando Pirates’ day. 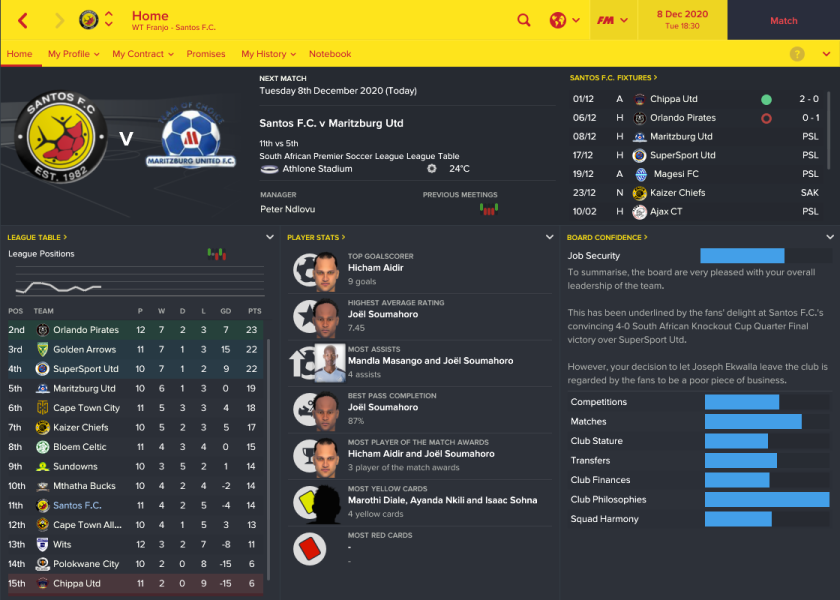 We’re back at the Athlone just 2 days later, this time hosting Maritzburg United. Maritzburg are having a terrific season so far; After finishing below us in 13th last year they’re currently sitting pretty in 5th place, just outside the African Confederation Cup spots. Luckily, Sohna, Diale and Aidir are all eligible and fit again so they’ll come back into the lineup in place of Juno, Fanteni and Lark, giving us fresh legs and an injection of quality. I’m also resting Sinbad, dropping Sony Norde deeper into midfield and giving his right wing place to Ryan Moon, who I swear will get back to form this year even if I have to give him bionic legs. And I know a guy. Another ex-Santos player is back at the Athlone today: Moe starts at centre back for Maritzburg. I initially thought that he’d be my best defender upon my arrival but he swiftly proved me wrong and I couldn’t get rid of him fast enough in the Summer. Let’s hope he doesn’t start performing today. With less than 4 minutes gone Maritzburg give us a scare when Mnyamane draws Kakuba out of position and slips the ball through for Khumalo, who puts the ball straight into Komo’s arms.

20 minutes later we’re getting dominated. We give up trying to outright control the game and switch to a more standard mentality. We’ll try to retain possession and kill Maritzburg’s momentum so that we can build up some of our own.

It works to an extent and we start to build up some steam over the next quarter of an hour. With 3 minutes to play before the break we put together a decent passing move. Diale squares the ball to Norde 30 yards out and he steps forward and passes to Masango, cutting in on the edge of the box. Masango gets the ball out of his feet and puts his laces through it, nearly bursting the top corner of the net. It’s a brilliant goal and we’re deservedly ahead.

After the hour mark I make what’s becoming a pretty standard change: Japhta off and Zulu on as the more defensive full back. We also change to a defensive 4-1-2-3 and bring Carl Lark on for Aidir, who I don’t want to push straight back into another injury.

7 minutes later it should be 2-0. Norde, enjoying his central midfield role today, finds Lark 20 yards out and he slips a clever pass through for Moon. Moon should hit it first time but he takes a touch, taking him into the 6 yard box with keeper and defender right in front of him. He shoots but between them they block and clear the ball. Nkili hoofs it back into the box but the chance is snuffed out.

With about a quarter of an hour to go, Lark loses the ball to Moe and our old centre back boots the ball down the left wing for Khoza to chase. Khoza drills a cross in from the byline that deflects off Diale’s boot and rolls straight to Mnyamane, who tucks in the equaliser.

With 10 minutes to go, Sinbad comes on for Joël and with 5 to go Mnyamane tries to go full hero when he takes a pot shot from 25 yards, but Komo catches it. We see the game out at 1-1 and it just feels like it’s not been our day once again. 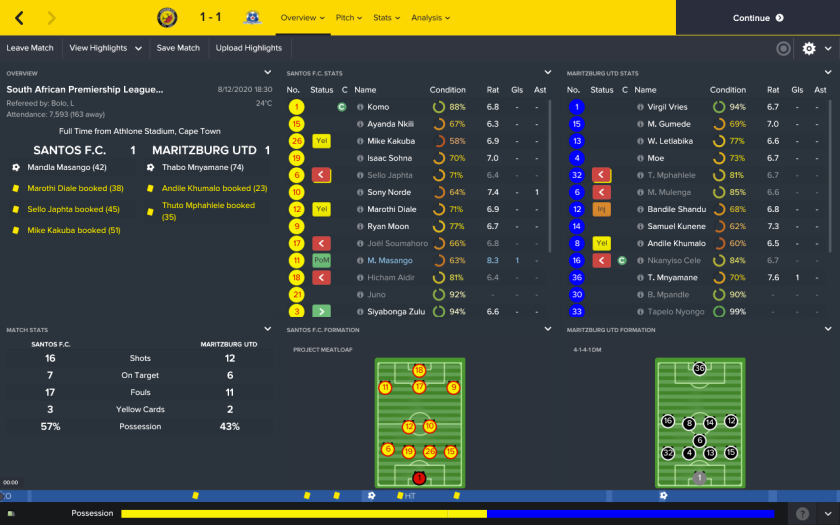 It’s yin and yang I suppose, if you want to be all philosophical about it – Football would be the most boring thing in the world if all your team did was win. Winning would become the norm and lose all meaning if you did it every week. You need the rough times and the gut-punching disappointment of times like these to give the good times meaning. That’s something to hold onto today. The good times had better be bloody good though.