Now is the time for one last sprint to the finish line. 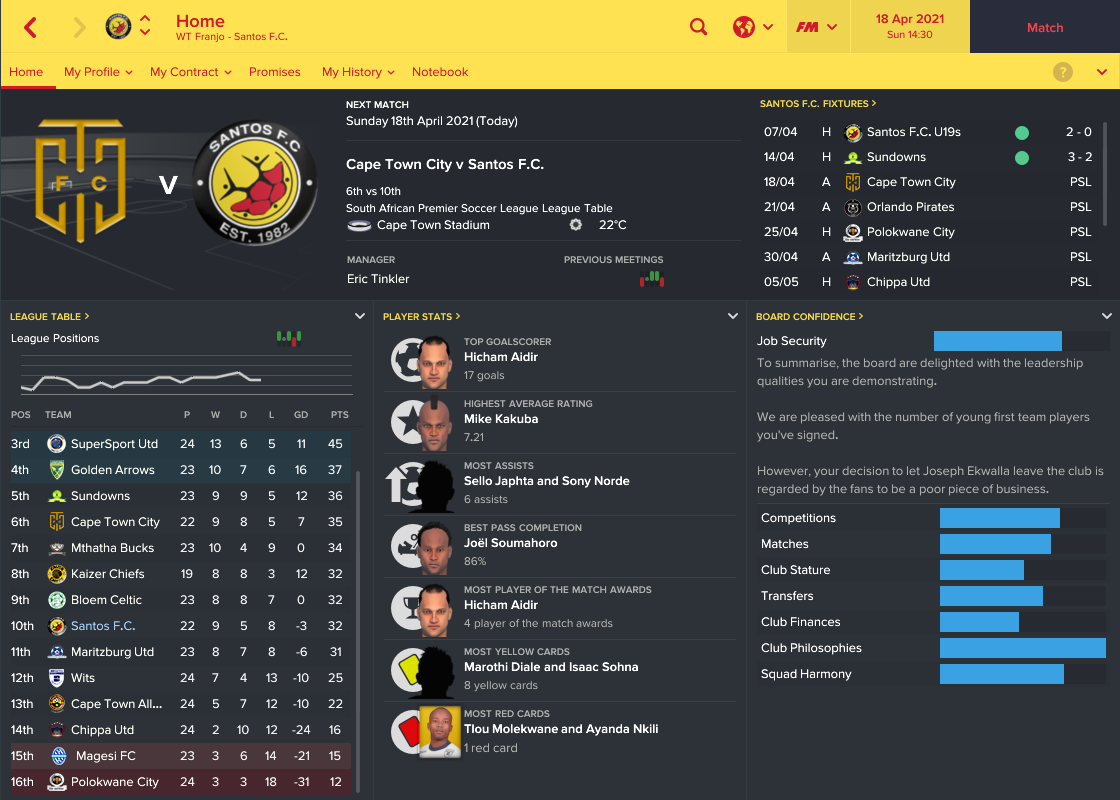 We’re on the home straight now. No more International breaks, no more cup games, just non-stop league matches until the end of the season. We’re sat at 10th place in the Premier Soccer League which I don’t like so much, but we’re only 5 points behind 4th placed Golden Arrows and we have a game in hand over most of the teams above us, except for Kaizer Chiefs who are still 4 matches behind most of the league, because you know… Scheduling. Now is the time for PSL tunnel vision. Now is the time to build up serious momentum. Now is the time for one last sprint to the finish line, to pick up as many wins and as many points as we possibly can, so that we can finish as high as we possibly can. We start our sprint by making the short trip to Cape Town City FC, who also have a game in hand over most of our rivals for the top half positions. We’ll be without Luther Singh, who’s pleasantly surprised me with his good performances since I took a punt on him in January, as he’s bruised his head in training. He’ll only miss 3-6 days though. 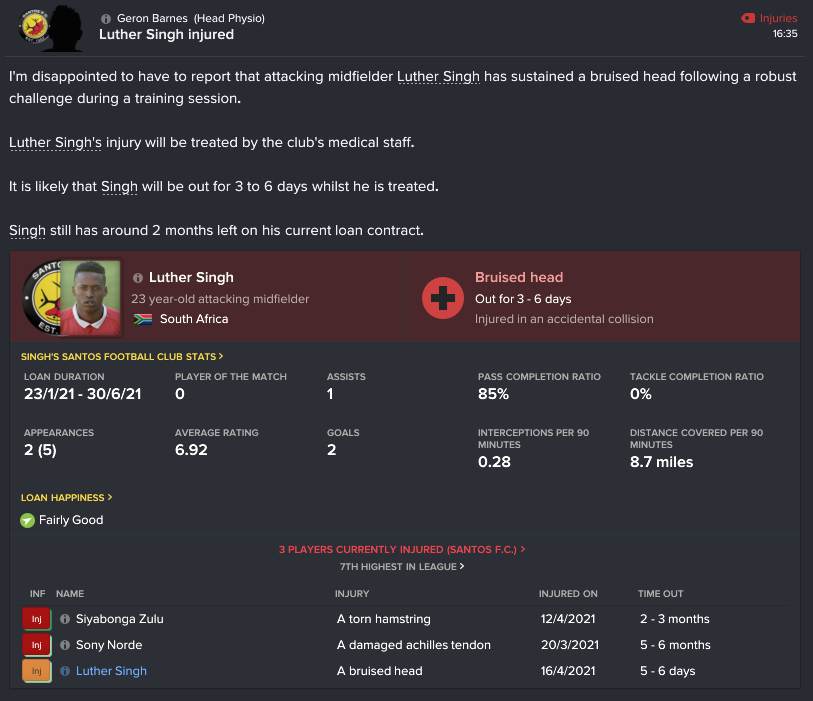 The perpetually underwhelming Yanga Baliso comes in for him on the left wing thanks to limited options but otherwise we’re unchanged. Hicham Aidir needs just 1 more goal to surpass the club record for league goals scored in a season which is 15, so fingers crosses today will be the day. 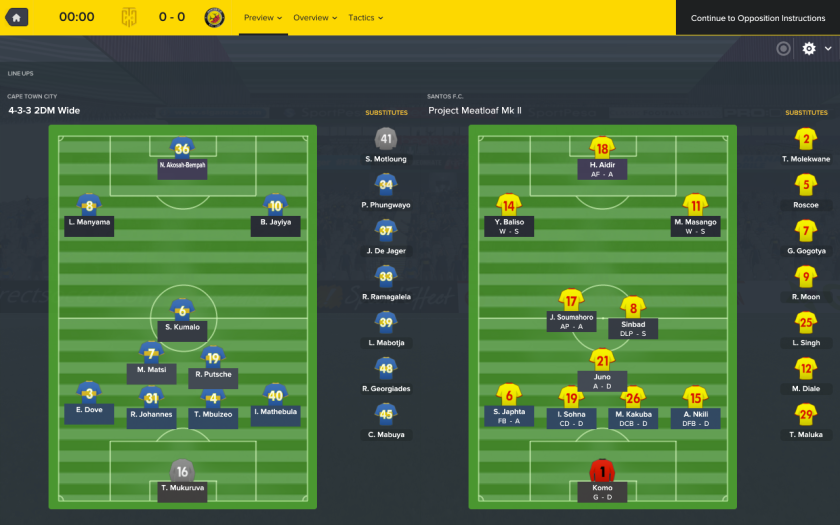 We get off to a rocky start. In under 5 minutes CTC take the lead when Manyama squares the ball to Akosah-Bempah in the area, and he places it coolly into the bottom corner of Komo’s net. They continue to push afterwards and I take action after 20 minutes. We’ll play on the counter to try to turn their momentum against them with through quick breaks.

It takes a while, but on the stroke of half time we grab a frankly undeserved equaliser when Masango’s low cross ricochets off a couple of defenders and falls kindly at Aidir’s feet a few yards out. Hicham slides the ball home to set a new Santos record of 16 league goals in a season, but worryingly we don’t deserve to be level after a first half in which Cape Town City have dominated.

Arguably Baliso’s most memorable moment since his ill-conceived Summer transfer is in the 57th minute when he sprains his wrist. He’ll play on though as I really don’t have anyone to replace him with. Sony Norde and Luther Singh are injured and so is Siyabonga Zulu, which means Japhta needs to stay at left back.

With 25 minutes to go, Mandla Masango whips a corner in to the edge of the 6 yard box and Sello Japhta’s there to volley us ahead. Masango gets another assist less than a minute later as Cape Town City try to attack us. They raise their defensive line too high and our winger clips a pass from our own half over centre back Johannes for Aidir to run onto. The big Moroccan latches onto the ball, brings it into the box, sidesteps the out-rushing keeper and rolls it into the net for 3-1.

Over the next 15 minutes I replace Kakuba with Roscoe, Sinbad with Gogotya and Baliso, who’s still nursing his wrist, with Marothi Diale, with Joël moving out to the left wing. I’ve got one eye on the midweek match so I’m keen not to overstretch anybody. With 7 minutes to play, Jayiya shoots low from the right wing, but Komo manages to tip the ball against the post. In the dying moments we do get the ball in the back of the net again when Japhta’s cross floats over Aidir and 2 Cape Town City defenders and is drilled in by Masango on the volley, but the goal won’t count as Aidir was adjudged to push one of the centre backs. The scoreline at the final whistle is extremely flattering for us. 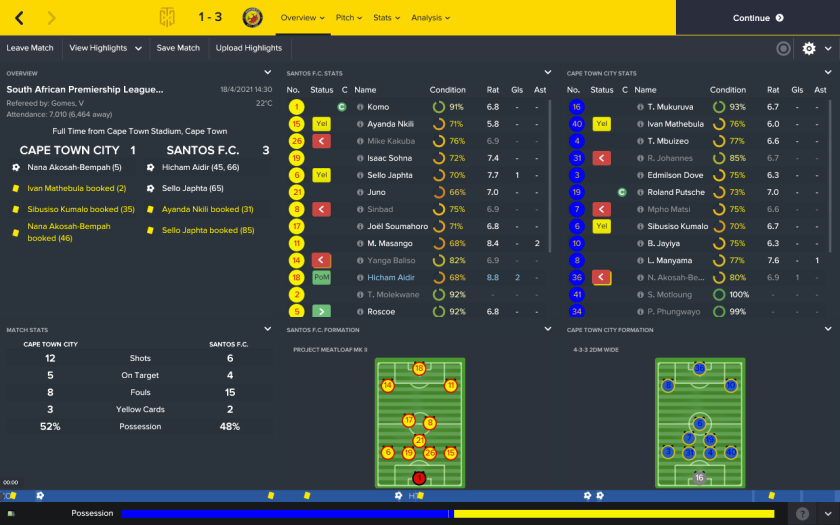 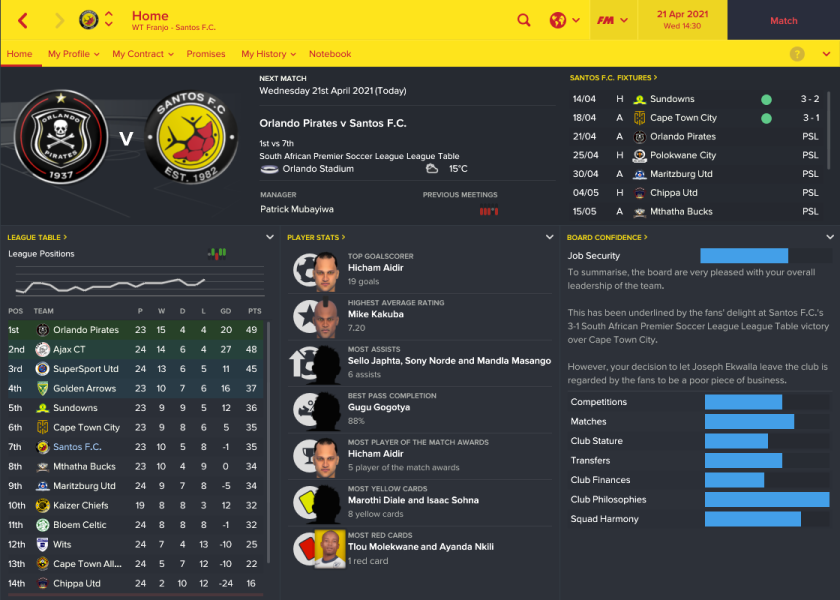 Yanga Baliso will have protective equipment on his sprained wrist for about 2 weeks, but he’ll still be able to train and play so hooray for that.

Hicham comes out and backs me to be offered a new contract after the match thanks to our good form. It’s a nice gesture but I’m genuinely not sure whether I even want one. The Lazio job’s still vacant but I’ve not heard back about an interview so I’m not hanging my hopes on it at the minute.

But while we’re on my future and the Lazio job, I’ve applied for a similar position in France: The AJ Auxerre job. Like Lazio they were a big team not so long ago, but they’re currently fighting against relegation from Ligue 2 so they’re shopping for houses quite a bit further down Self-Destruct Avenue than the Italians. Still, they’re a big club and I’d relish the challenge of restoring them to their former glory.

For now though I’m the Santos manager and we’ve been busy setting a couple of records. Hicham Aidir went above and beyond with his 2 goals against Cape Town City, setting a new Santos league goals record of 17.

Orlando Pirates are up next. They’ve caused me a few headaches during my stint in South Africa and are sitting at the top of the league, so a win today would really show how much progress we’re making. As we’re only 2 points behind Golden Arrows, the 3 points could also take us into the top 4. We’re only making 1 change from the CTC match; Ryan Moon replaces Yanga Baliso and will take the right wing while Mandla Masango cuts in from the left. Baliso and Luther Singh are both fit enough for spots on the bench though. Once again we’re dominated early on, forcing us to play on the counter after 15 minutes. We gets a chance a few minutes later when Joël spots Aidir running through into the box and tries to play the ball in to him. It deflects off Adolph’s foot and bounces over to Masango, who’s cutting in from the left. He takes a touch 6 yards out and pulls the trigger, he can’t miss… And yet he does. Mandla manages to skew the ball wide of the far post. It’s a really awful strike.

A couple of minutes later, Joseph Ekwalla gets the ball. He passes it forwards to Ndoro on the edge of our box, who turns and lashes the ball into the bottom corner to put the hosts ahead. After half an hour we pull level though when Aidir plays a give and go with Masango. He gets himself into the box and when Masango chips a cross in from the left wing, Aidir’s there to volley into the net.

The game’s still tight as we move towards half time, but then with a couple of minutes to go before the break Masango lays the ball back for Japhta, who passes it inside to Joël Soumahoro. Joël turns and hits the ball so sweetly. He’s already running away in celebration as it flies into the top corner.

Moon’s had another quiet game and I sub him on the hour mark, bringing on Baliso and his big glove. He’ll play on the left and Masango will go back over to the right. 5 minutes later we win a free kick just left of centre and just outside Orlando Pirates’ box. Juno steps up of course and cracks the ball over the wall and against the bar. It bounces high into the air and comes back to the young holding man, who shoots again but slices it wide of the far post.

Happy to settle for 2-1, Diale comes on for the tiring Juno and we go to a defensive 4-1-4-1 with 10 minutes to play. We hold on until the 93rd minute but then Ayanda Nkili underhits a backpass to Komo, allowing Ndoro to run in one on one and equalise from close range. These bloody Pirates have foiled us again. 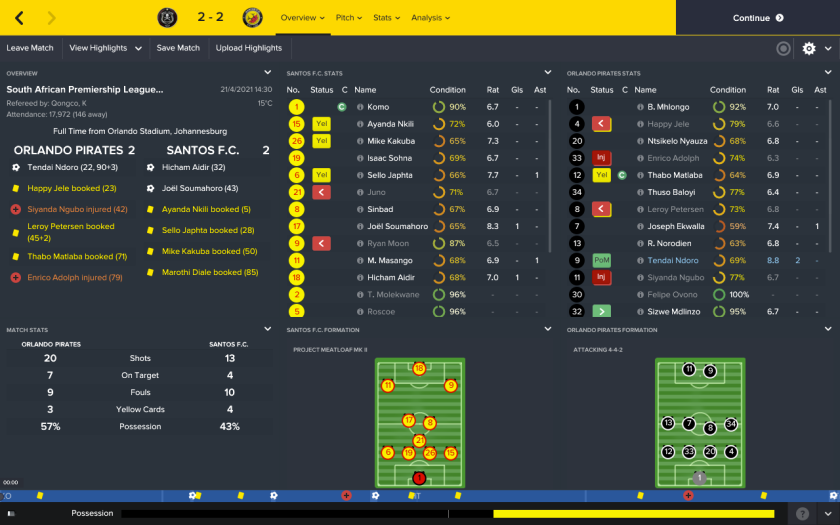 It’s frustrating to concede late like that, especially when a win would’ve taken us 5th, but 8th is still a good position to be in and we’ve still got plenty of opportunities to pick up more points. Add on top of that the fact that Orlando are at the top of the league and I won’t lose any sleep tonight.