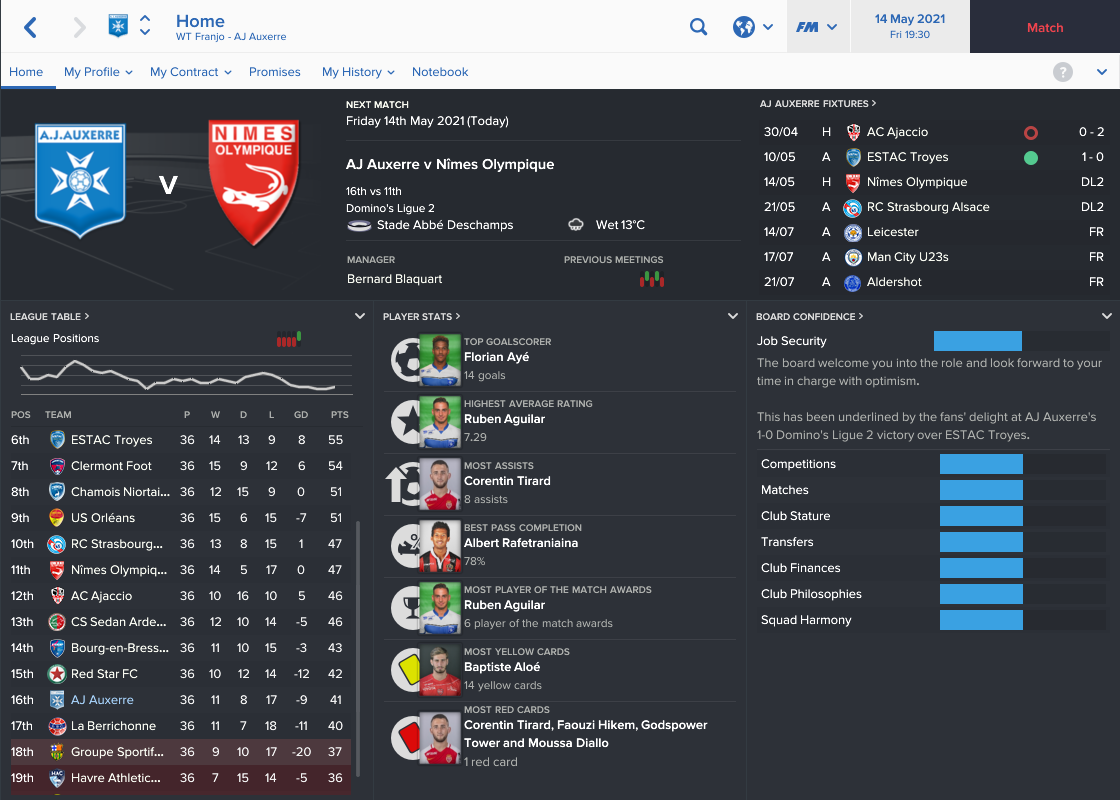 “I heard ‘Photo’, big smiles lads”, I mutter to Auxerre’s 2 newest signings. I put my left arm around Joël Soumahoro and my right around Hicham Aidir and we grin our cheesiest grins as the 2 of them put pen to paper. 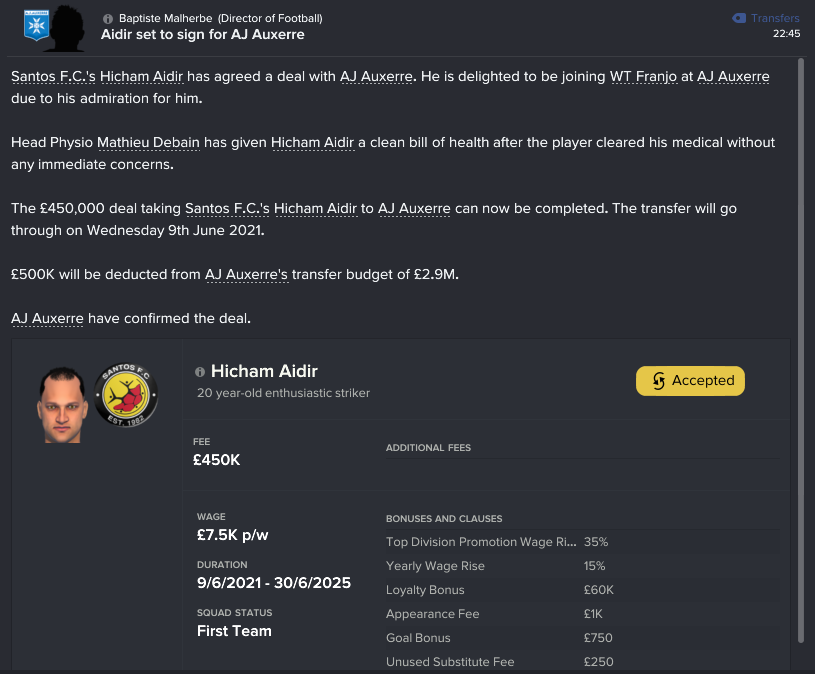 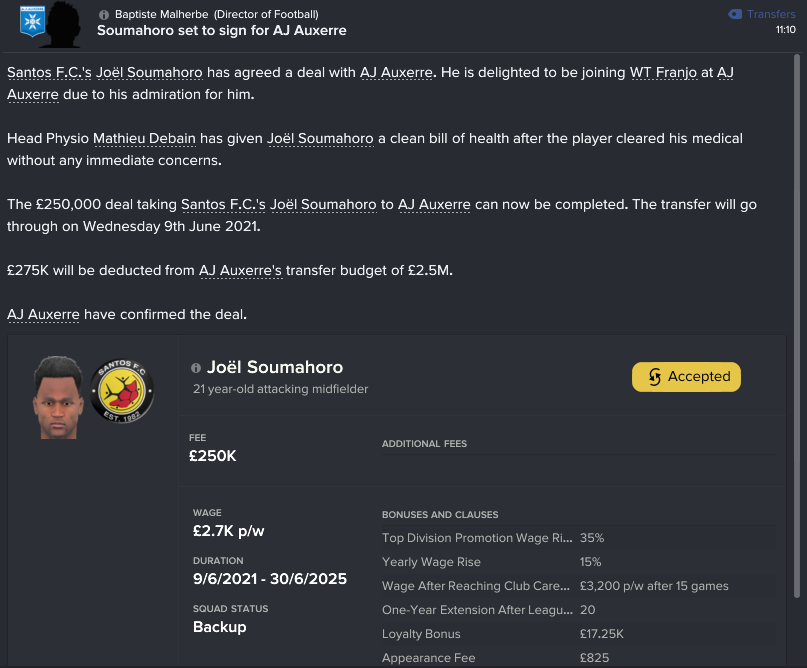 “Merci”, mutters the cameraman as he lowers his camera.

“I wish we had you 2 for the run in”, I whisper to Joël and Hicham with a smirk. Joël laughs, but Hicham looks more serious. “We played OK in the last match”, he says, “Florian is a good striker I think.”

“Nothing wrong with a bit of healthy competition though is there?” I laugh, “You’d best bring your A-game for next season mate!”

He’s right to be fair. I don’t know whether it was because of some kind of “new manager bounce”, or going back to basics, or our system or our selection, or a combination of all of the above, but after all my fretting and frantic plotting, we put in a good solid performance against ESTAC Troyes and deserved our win. So what’s next then? Well I get a surprising phone call the day after the double signing. The board want L’AJA to go on a pre-season tour of England in the Summer because of the club’s apparent popularity back in my homeland. I put this mainly down to my theory that my name has recently been growing in popularity amongst English hipsters, all of whom have obviously been watching my career since the Höllviken days. I accept the tour. Once we’re finished in the League we’ll be able to look forward to 3 intriguing away ties against Leicester City, Manchester City U23’s and erm… Aldershot. Apparently we’re popular in Aldershot.

With 2 matches left we’re 4 points above the relegation play off spot, so another win would see us over the line with our Ligue 2 status secure. Today is my first match at my new home and we’ll welcome mid-table Nimes Olympique to Stade de l’Abbé Deschamps, named after AJ Auxerre’s founder. There’ll be no changes in personnel for this one. You know me; on the rare occasions that I’m in my right mind, I never change a winning team. The only tweak I make from our win over ESTAC Troyes is to not make us so narrow, as it could make us vulnerable on the flanks against a team playing with actual width. 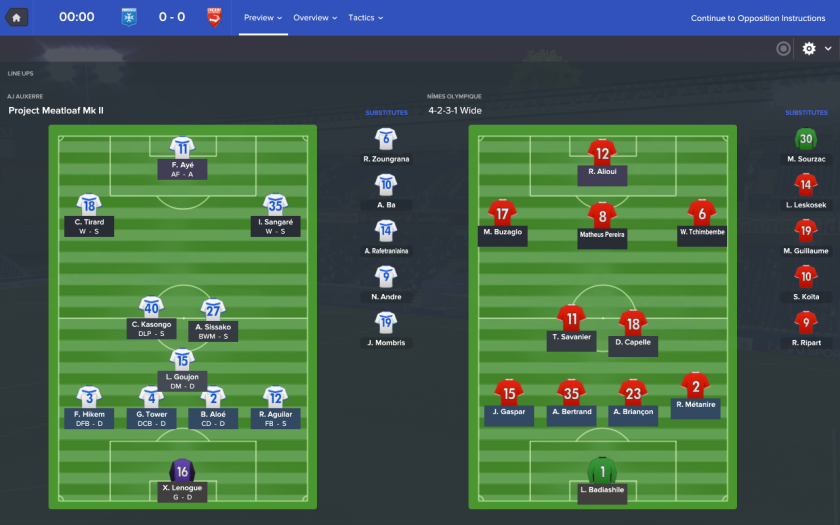 2 minutes in we concede a free kick, which Buzaglo chips in from the right byline. Tchimbembe cushions the ball down for Métanire brilliantly and the right back shoots on the volley, but Sissako deflects it out for a corner, which comes to nothing. Nimes stay on top of the first half and we go on the counter after 25 minutes, but the match is goalless at the break.

I don’t know what Nimes manager Bernard Blanquart says to his lads at half time but it certainly works. Less than 3 minutes after the restart, Tchimbembe drives powerfully through the middle of the pitch and passes to Savanier. The midfielder shoots from 30 yards and the ball arrows into the far corner of the net. It’s a great goal, but now isn’t really the time to admire it. We try to control the game after that but things aren’t made any easier for us in the 54th minute when Godspower Tower picks up a knee injury and has to be stretchered off. Goujon drops back alongside Captiste and I bring on pacy Malagasy midfielder Albert Rafetraniaina, the answer to the age old question “Who ate all the vowels?”, to be our holding man. Zoun also comes on for Sangaré on the right wing. 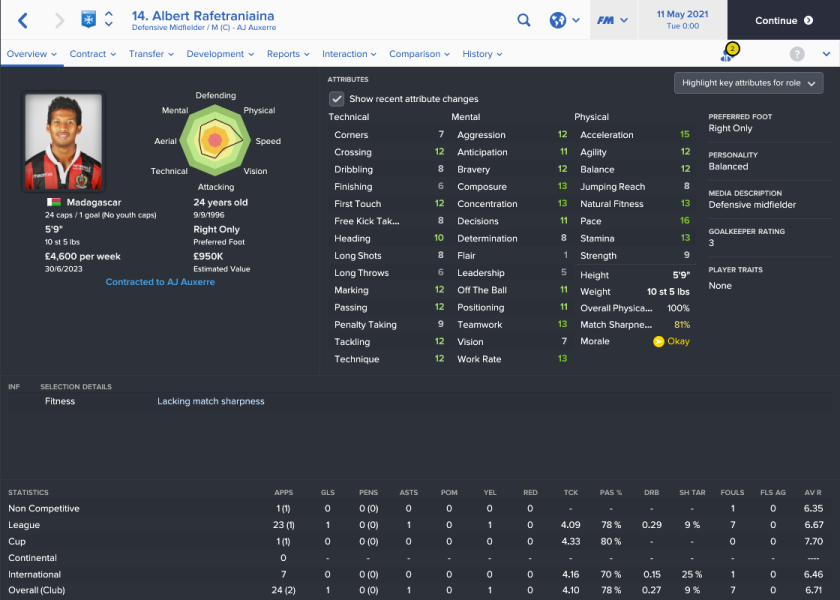 With 20 minutes to go Buzaglo sends in another free kick, this time from deep on the right wing. He arcs the ball over to the far post and Aguilar jumps to head it clear but misses it. Briançon places it past Lenogue to double the visitors’ lead. 5 minutes later I bring on Jérôme Mombris, our slow but savvy veteran wing back, for Faouzi Hikem, who has not lived up to his “Best young player at the club” billing in my first 2 games. We go on the attack. 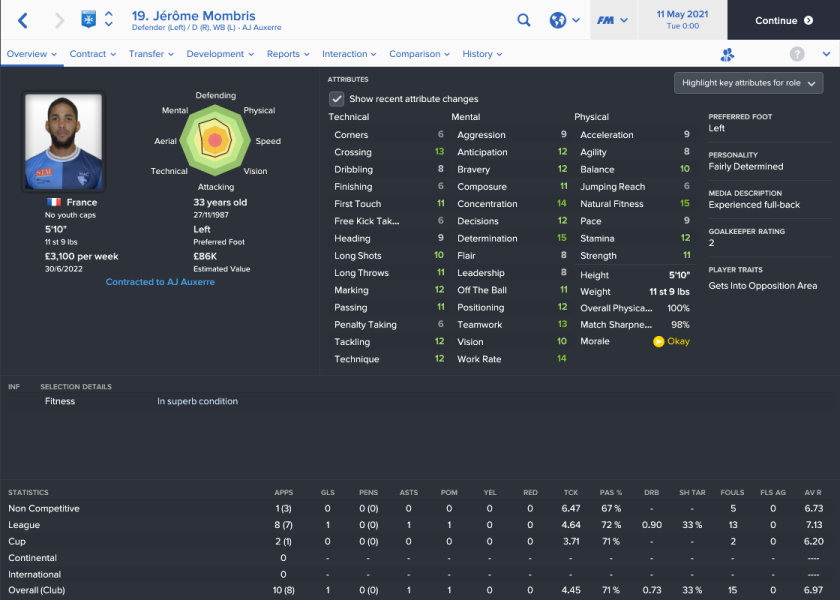 In the dying minutes, Chancel Kasongo plays a good pass through for Zoun to chase but Gaspar slides in to knock the ball away. The loose ball rolls to Tirard 12 yards out though and he curls it out of the keeper’s reach to pull one back for us, but it’s too little too late. 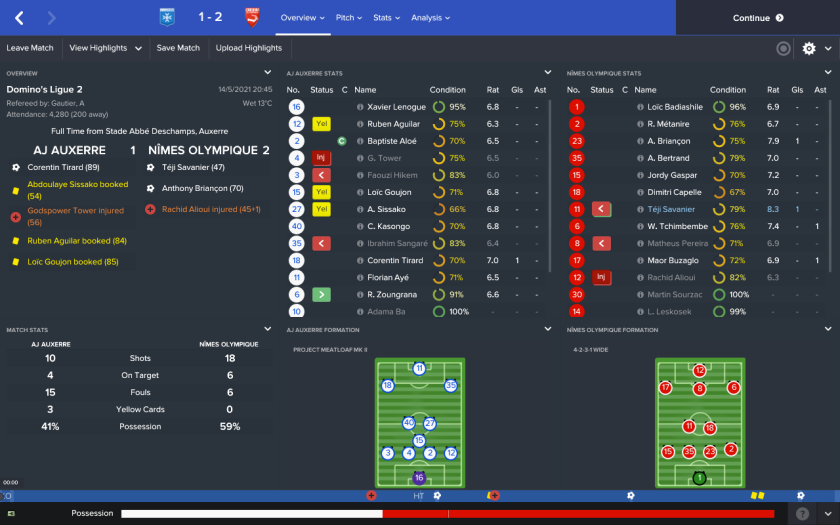 That… Is not ideal at all. FC Chambly-Oise and Havre Athletic Club have now guaranteed themselves the 2 relegation places, but Groupe Sportif Consolat, the team currently occupying the relegation play off spot, have won their penultimate match and are now only 1 point below us, equal with La Berrichonne. 2 of us are going to stay in the division without need of a play off, but one of us isn’t. Once again, and I feel like this happens far too often for me, it’s all going to come down to the last game. 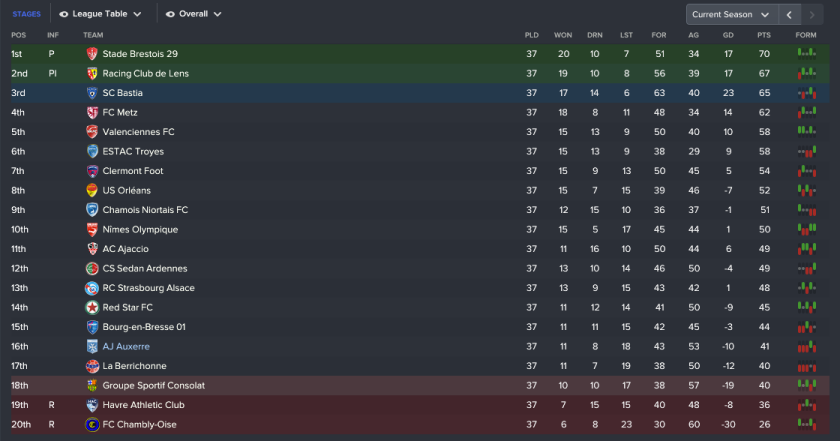