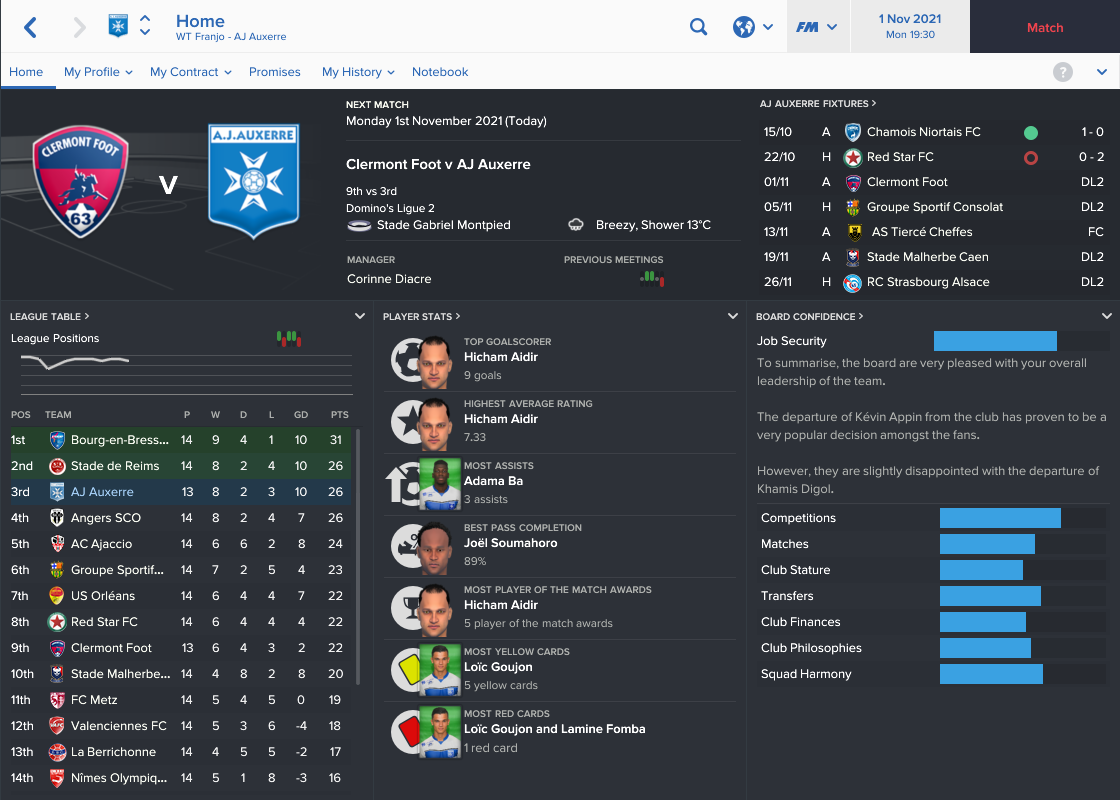 I’ve been in a surprisingly good mood this week. Since I showered off that filthy display against Red Star I’ve remembered it only as a blip. A single ugly brush stroke on the masterpiece that has been Auxerre’s start to the season. I’ve been in such a good mood that I tied up new contracts with several players: Backup goalies Bingourou Kamara and Anthony Gasnier, right back Issa Samba, who I started the season unsure about but who has proved his worth, and Mike Kakuba, who for some reason I had only given a 2 year contract when he signed a few months ago. 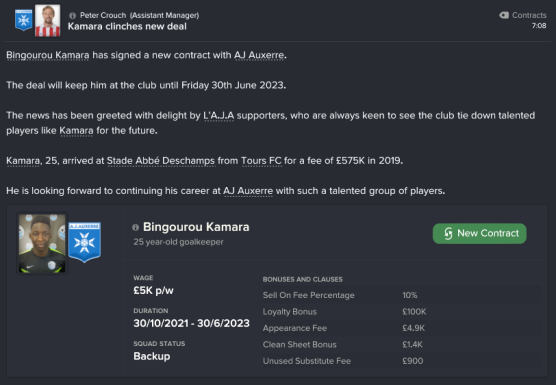 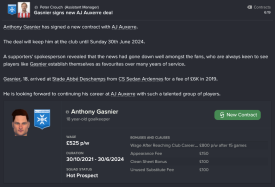 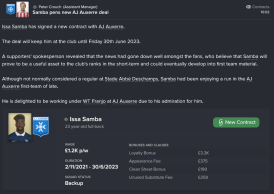 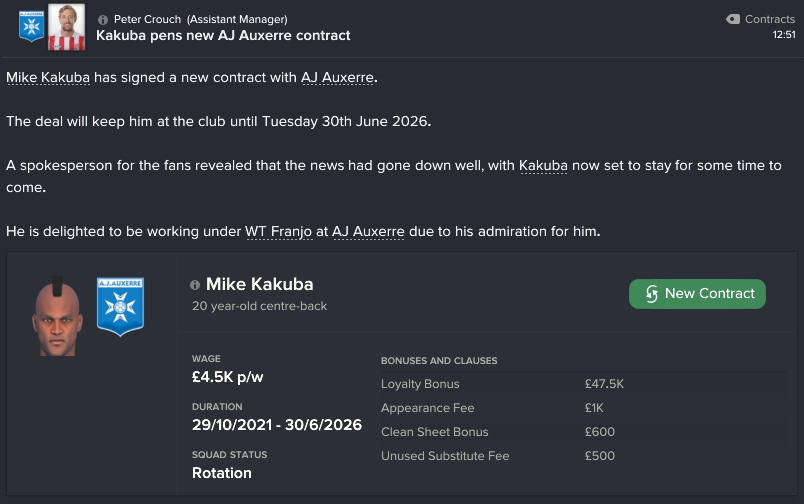 To brighten the mood even further, the draw for the French Cup 7th round is drawn too, with Auxerre pit against AS Tiercé Cheffes, a small semi-pro side. Putting aside the fact that we’ve already been dumped out of one cup by lower league opposition, this is a really kind draw for us. 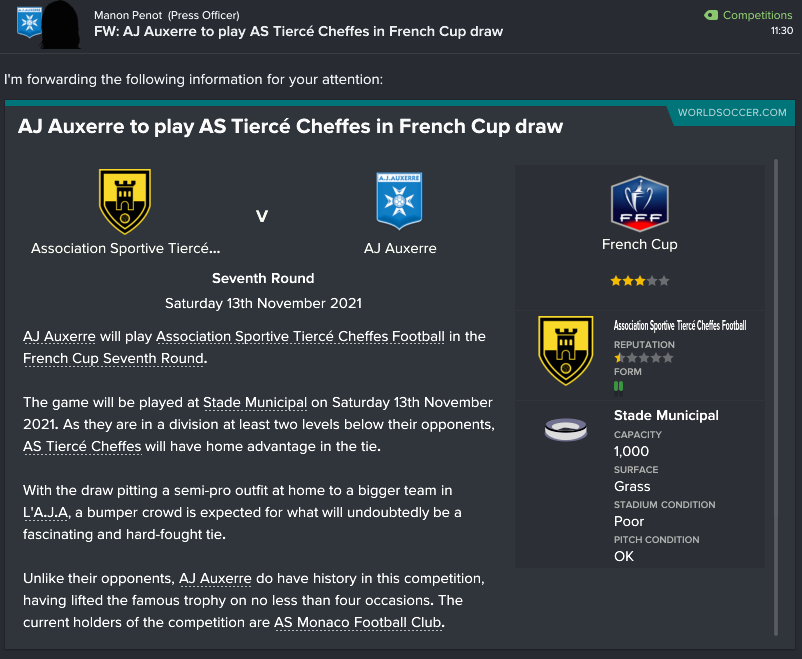 And then my good mood plummets when head physio Mathieu Debain walks into my office with a rain cloud over his head. We’ve suffered yet another long term injury to one of our young stars, this time Alessandro Bassani, our sought after left winger. A broken ankle. He hadn’t made it into my team so far but with my faith in Corentin Tirard ever dwindling, he was getting closer. He’s now out for 4 months, which is a big shame for a young lad with a lot of potential. 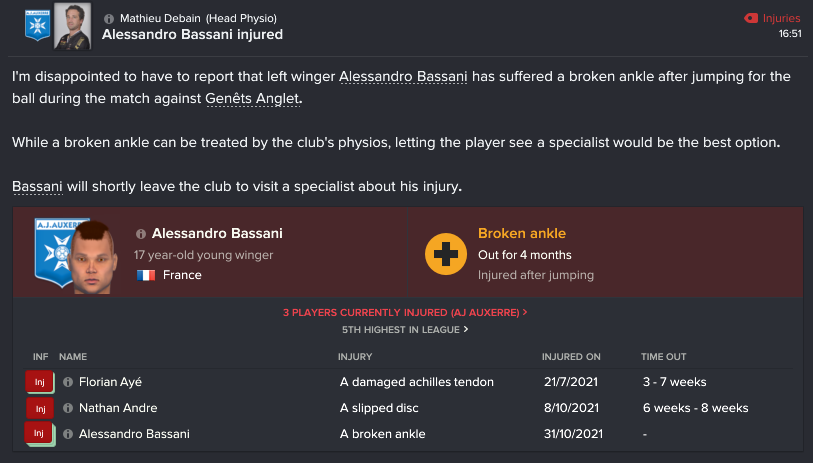 So that’s sufficiently brought me down ahead of our away match at Clermont Foot, who are 9th in Ligue 2 and only 4 points behind us. Clermont manager Corrine Diacre is the only female manager in the league and she’s something of a local hero, having been in charge of the club for over 7 years and making them almost a nailed on top 7 side. Unsurprisingly I’ve got some changes to make today after my usual central midfield partnership both got themselves a 1 match suspension with their sendings off last week. Sissako and Raf come in to replace Fomba and Goujon while I heed the advice of my cat Meatloaf and stick with the system that I named after him.

39 seconds. 39 seconds is all it takes for L’AJA to put together a passing move, for Phil Foden to cut inside with the ball, to lay it off and for Abdoulaye Sissako to fire us ahead from 12 yards. 39 seconds. 2 minutes and 58 seconds later we’re 2 up. While I stand gobsmacked on the touchline, Joël tees the ball up for Sissako again and the midfielder takes a touch and smashes it goalwards from 20 yards. Unfortunately the ball takes a wicked deflection on the way into the net off centre back Nathan Dekoké and goes down as an own goal, but Sissako clearly has a point to prove today.

As the half hour mark approaches we’re still winning 2-0, but Clermont are trying to find a way back. Doucouré switches off for a second while marking lone striker and former Lazio, Aston Villa and Czech Republic player Libor Kozák and he times his run through the defence perfectly just as Jobello feeds a pass through to him. Kozák stabs the ball at goal but Lenogue makes a good save, sending the ball behind for a corner. We go slightly narrower to try and prevent that kind of chance from reoccurring and the scores remain unchanged at half time.

The second half is a quiet one. Hicham Aidir has now turned in 3 goalless performances in a row, which normally wouldn’t make me bat an eyelid, but he’s Hicham bloody Aidir. I bring him off on the hour to give Montiel another run out, while Tirard comes on for the last 15 minutes. In the end though an extremely dominant performance allows us to come away from Clermont with a 2-0 victory. 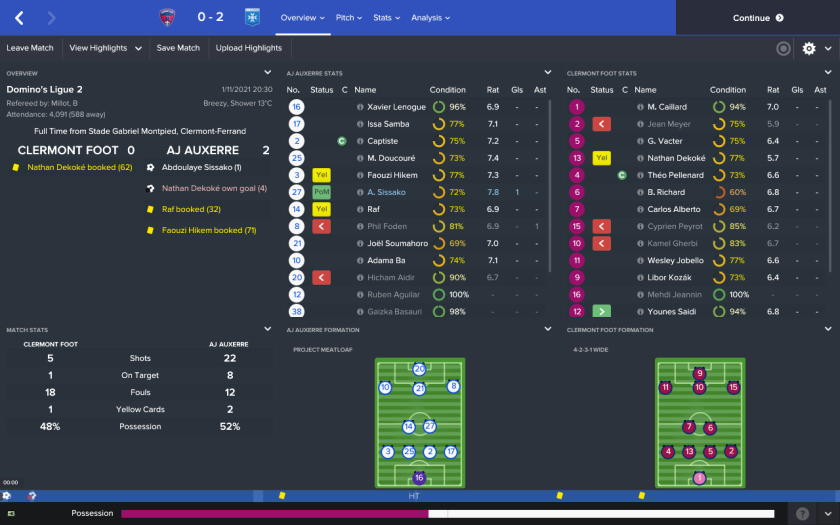 Abdoulaye Sissako, who I didn’t think much of yesterday, has turned heads with that performance. Arguably 2 goals in 4 minutes, a Man of the Match award and a Team of the Week selection all from a day’s work makes me want to keep a very close eye on him. 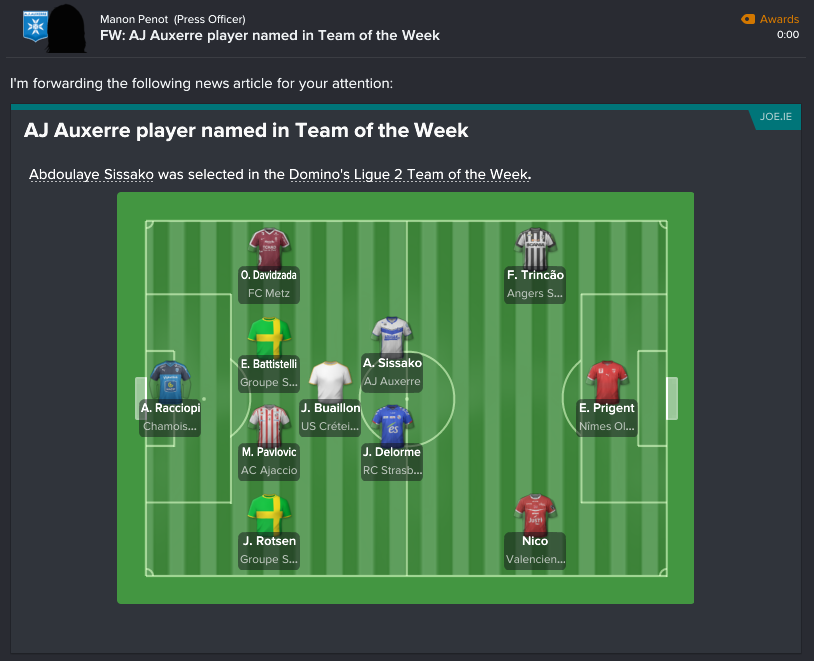 We’re meant to be playing our Cup match against AS Tiercé Cheffes during the international break in a couple of weeks time, but I request to have it postponed. Zoun, Aidir, Raf and Lenogue have all been called up by their respective countries and although our striker and keeper are probably due a rest, the other 2 could well feature and I want them available. 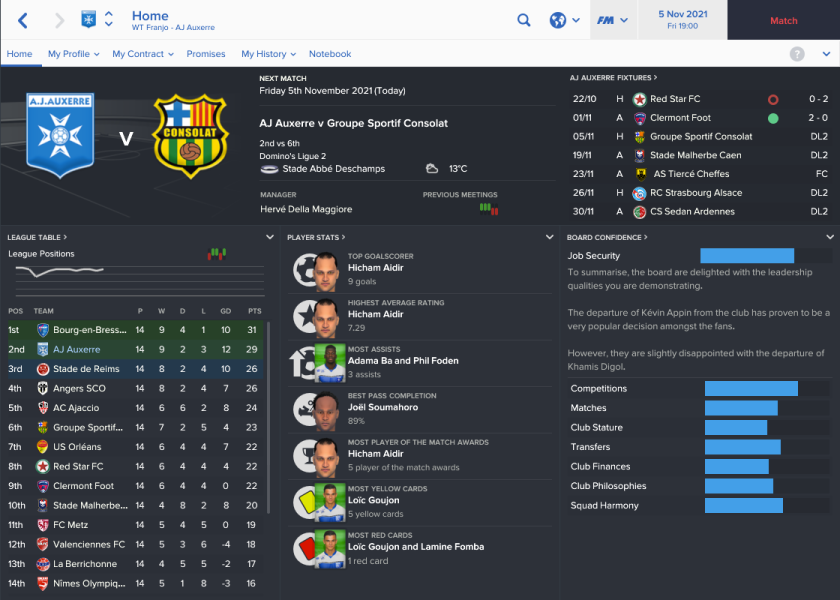 The good news in regards to our position in the league is that Bourg-en-Bresse have only taken 1 point from their last 2 matches, which has allowed us to emerge from the chasing pack and just about catch up with them, only 2 points behind. The bad news is that our next opponents are the only team so far that have been able to beat them: Groupe Sportif Consolat, who join us for a “Fan Day” in Stade Abbé-Deschamps.

They’re 6th and performing far above their predicted level, having been one of the favourites to go down this year. They were very nearly relegated last year too, but stormed back from a 1-2 home loss to win the relegation playoff 5-3 on aggregate against GFC Ajaccio. Adama bruises his shin in training the day before this one, which is annoying as it coincides with a suspension for Faouzi Hikem, who picked up his 3rd booking in 10 games as we beat Clermont Foot. Our entire left side needs to change and I’m already worried about this rejuvenated Consolat side. The play a narrow diamond 4-4-2 so we’re going to Project: Meatloaf Mk II. We’ll play ultra narrow to counter their strategy as we so often do, and in terms of personnel Mike Kakuba starts in defence for the first time since his injury 2 and a half months ago when he was ousted by Doucouré, who will move across to left back where he’s fairly competent. Tirard will come in on the left wing, where he’ll provide width while Doucouré just stays back and keeps his defensive position as I don’t want to overstretch him. You’ll also notice that Lamine Fomba and Loïc Goujon are back from suspension and will be watching from the bench. Let this be a lesson to everyone else that fancies an early bath. 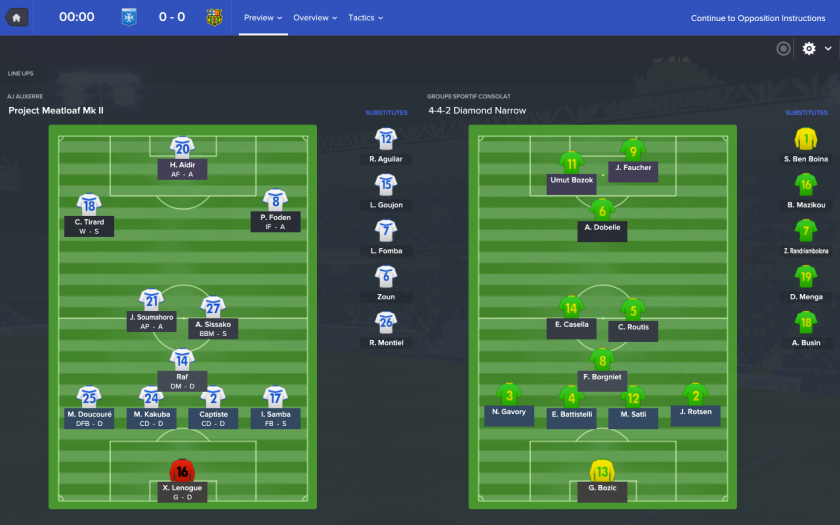 I knew we’d be in for a scrappy match and the first 25 minutes is predictably tight. I want us to take control though so we’ll push on slightly. It nearly works after just 5 minutes when Samba wins the ball 25 yards out on the right and chips a lovely cross to the far post on the turn. Of all people Joël rises to get his head to the ball and sends it looping back across goal towards the top corner, but it clips against the bar and falls to Phil Foden, before Bozic steps in and scoops the ball into his arms. Consolat have their own chance a minute or so later when striker Umut Bozok hits a pot shot from about 25 yards and sends it oh so wide.

With 6 minutes to play before the break Sissako drives forward into opposition territory. He spots Phil Foden in a central position 25 yards out and fires the ball into his feet. Foden controls it well and shows good vision by playing a little reverse ball to Tirard, who’s in space on the edge of the box. The winger gets the ball out of his feet and boots it straight down the centre of goal, but it has enough power to take it past Bozic and into the net. Well I never. It may only be temporary, but Corentin Tirard’s just put us top of the league.

The second half, much like in our last match, is quiet. Again, Montiel comes on for the worryingly subdued Hicham Aidir, but the match ends with only a single goal scored. 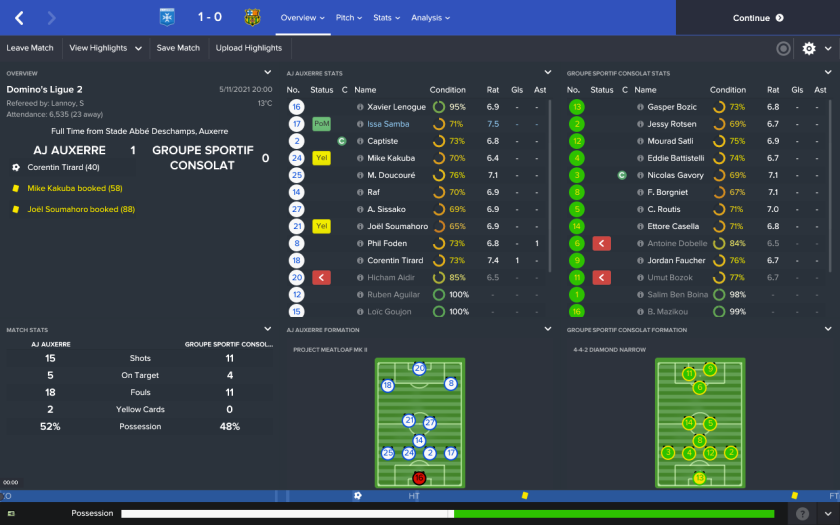 The board are disappointed that the fan day game wasn’t a 5-4 end to end barnstormer of a match, but by definition most of the crowd got their tickets for free so they got what they paid for.

That sort of thing won’t cause club attendances to skyrocket, but do you know what will? AJ Auxerre sitting on top of Ligue 2 with 15 games played, separated from 2nd place Bourg-en-Bresse by 3 goals. Now we just need to stay here for 23 more games. How difficult can that be? 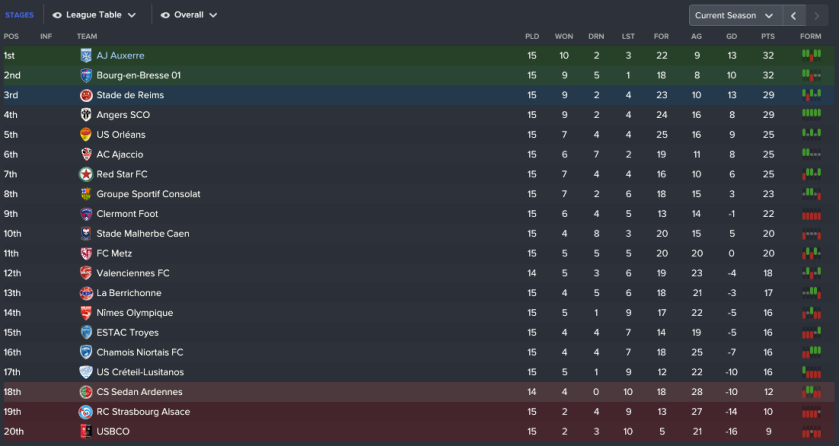 One thought on “Surprise Heroes (Franjo: A Journeyman Story – Ep129)”