Let’s get the second half of the season started off right, shall we? 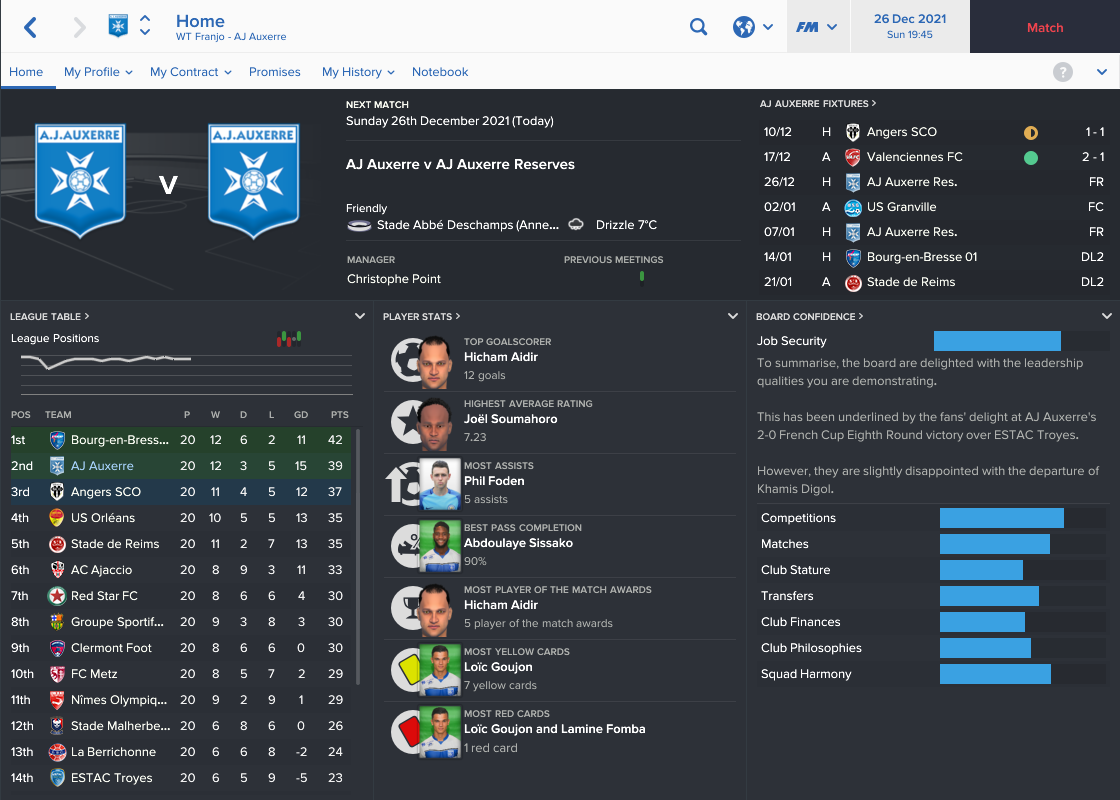 6AM, day after Christmas. I throw some clothes on in the dark. It’s been about a week since I last saw Sylvania and since I last saw Meatloaf and Burnie. I searched my flat from top to bottom that night but eventually accepted the conclusion that the 2 cats had slipped through the open door and disappeared into the night. After the locksmith came to put 3 brand new and incredibly sturdy types of lock on my front door I installed a cat flap too, in the hopes that they’d reappear. They haven’t though. They’ve not even returned in my dreams. I’ve been cutting a lonely figure at the top of the Tribune Leclerc stand.

I wasn’t really in the mood for Christmas to be honest. I got a couple of texts from members of the Auxerre team but that was about the extent of my Christmas day. I was even less in the mood for certain French tabloids that were linking me to the Caen job, who are the latest club struggling in Ligue 1. I made my intentions to stay perfectly clear.

But today is Boxing day and in order to keep the squad sharp for our cup match against Granville next week, I’ve lined up a friendly against our B team. Now that our players are starting to come back from an extremely injury hit first half of the season, it’s an interesting opportunity for the fringe players to show me what they’ve got. They seem extremely determined to make the most of it too when a Florian Ayé goal and a Zoun double put the reserves 0-3 up after 33 minutes. We fight back though with goals from Joël and Phil Foden before the break and Hicham Aidir equalises in the second half. With 35 minutes to play I expect us to complete the turnaround, but a late Abdoulaye Sissako strike wins it for the reserves. It’s an interesting match and I’m certainly impressed with what I’ve seen from some of the winning side. 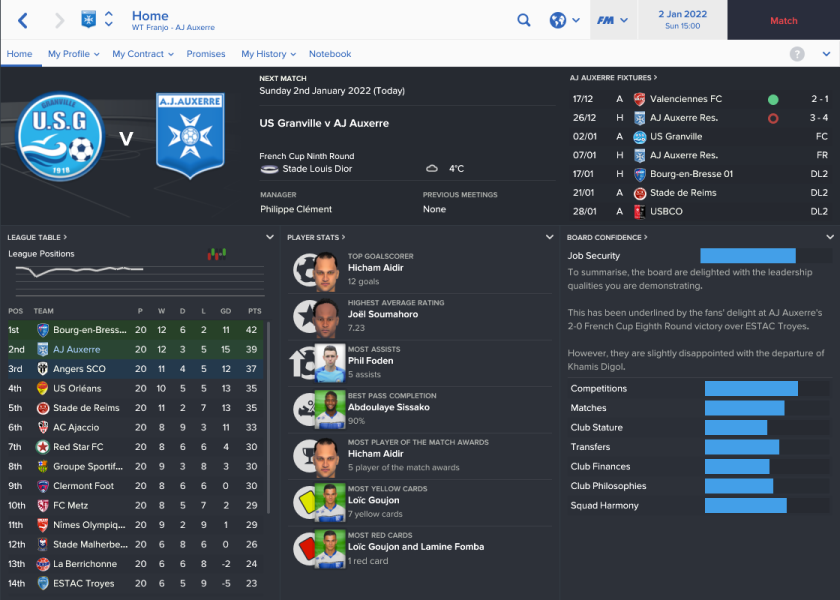 Another undesired opportunity presents itself a couple of days later when I’m linked with the vacant Stade de Reims job. To be honest though I feel like even though they were recently a Ligue 1 team, I’d be taking a step down by joining them. I publicly deny that there’s any truth in the rumours, which makes the board so happy that they offer me a year’s contract extension. I sign happily. This is the offer I wanted.

There’s a little bit of transfer activity before the Granville game: Zoun’s wanted by FC Lorient in the top tier and they put down a £1.5M bid, but I reject it. I’m still waiting for him to impress me but I know that there’s still a lot more to come from our pacy Burkinabe winger. I do accept a loan bid from Belgian Pro League side Cercle Brugge for Nathan Andre though. The young striker was unlucky in slipping a disc and being ruled out through a time when I would have gladly given him an extended run in the first team, but now that Aidir’s remembered where the goal is and Ayé’s back from his injury, I think Nathan’s development will be boosted by a spell in Belgium’s top flight.

And so it’s time for the French Cup 9th round: A glamourous away tie against French CFA 2 side US Granville. I want not only a win today but a good performance to boot. We’re going with a fluid attacking variant of Project: Meatloaf. The lads that were suspended for our last match are back and Hikem’s back from injury too. We are missing Raf, who’s suspended and Tower, who’s picked up a virus though. Kamara gets a rare start in net and will be protected by a back 4 of Samba, Captiste, Doucouré and Hikem. Sissako and Goujon form a battling midfield and we’ll have Joël behind lone striker Florian Ayé, with Foden cutting in from the right and Zoun doing likewise from the left. I’m pretty interested to see how our in-demand winger takes to the position having never played there professionally.

We get off to a great start when little Phil Foden curls a close range free kick in over the wall only 8 minutes into the match. 13 minutes later he plays a part in our second too, taking an indirect free kick short to Joël, who plays a defence-splitting pass through to Ayé in the box. Ayé takes a shot first time on his weaker foot and finds the back of the net to double our lead.

10 minutes from the break Florian nearly bags his second after another fantastic ball from Joël gets him in behind the defence. He jinks past a challenge but drags his shot just wide of the far post.

With the match looking pretty much done with half an hour left I hook 2 of our booked players, Samba and Goujon, and bring on Aguilar and Fomba. A few minutes later Ayé gets his head to a Kamara goal kick and nods the ball on for Foden, who runs through to the edge of the area and shoots. The ball hits the post, comes back, hits the goalkeeper on the back of the head and bounces out for a corner. It’s a decent chance but the resulting corner comes to nothing.

With 5 minutes left Auxerre put together a great passing move and Foden plays a through ball into the box for Ayé, who drills it into the net to make it 3-0. It’s a one sided game all round and I’m pleased with the performance and the result. 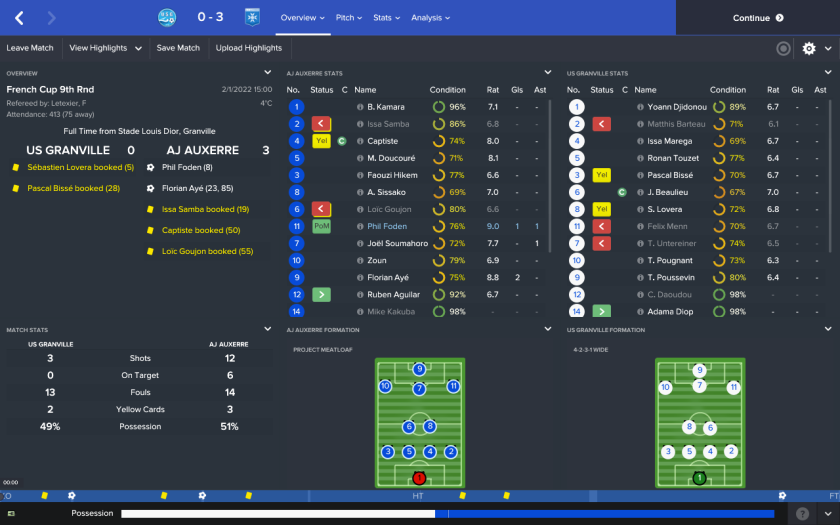 The French Cup 10th round draw pits us against Bordeaux, which is an extremely exciting prospect. A high profile match against a big Ligue 1 club is just what I was hoping for.

The next week or so is heavy with minor transfer activity. Fabien Fonrose is a player that I thought I might use as a backup centre back this season but I’m not sure he’s set foot on the pitch yet. He’s allowed to move on loan to Strasbourg. 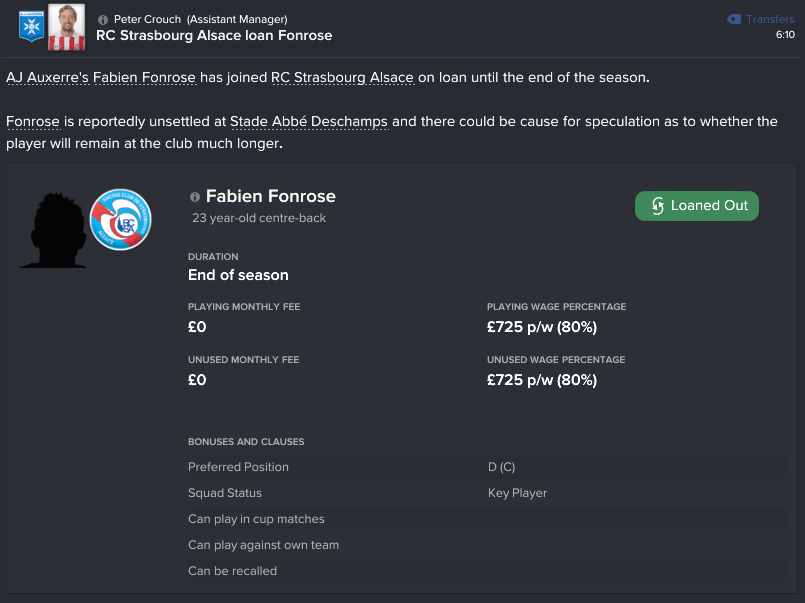 There are also loan moves for young striker Abdoulaye Traoré, who joins French National side SO Romorantin, as well as Daniel Garza and Paul Mullan, 2 youngsters who I don’t think are longed for the Auxerre first team. They travel back to their native North America on loan with Ottawa and Phoenix respectively.

Corentin Tirard, the forgotten man to some extent after his standout performances in last year’s appalling Auxerre side, is unhappy with his recent lack of first team football. I sit him down and tell him that Adama Ba’s playing too well on the left wing, which is a bit of a stretch to be fair, but Corentin seems satisfied with my explanation. I’m fairly sure I’ll be letting him go in the Summer anyway.

I set up another friendly against the reserves to see what we’ve learned from our new attacking variant. Aidir, Raf and Lenogue come into the first team as we tear our second string apart. Zoun gets us off to a flyer and then after Florian Ayé equalises, Hicham and Foden both score quick fire braces to give us a glossy 5-1 win.

Romain Montiel is then ruled out for 7-9 weeks with shin splints. I’m a bit gutted for him but again, he’s not getting anywhere near my first team unless we have another injury crisis so we should be OK.

A couple of players that won’t be leaving right now are Ruben Aguilar, who we receive 3 bids of around £1.5M for from Eibar, Alavés and Atlético Pamplona, and Godspower Tower. True, Aguilar hasn’t been a regular starter since the unbelievable and unpredictable rise of Issa Samba, but if I’m going to let Ruben go it’ll be for a substantially higher price.

Godspower does want to leave as he’s also not featured as much as he’d like. The only offers we’ve received though are a non-negotiable £325k bid from Freamunde, which isn’t enough, and a loan offer from Clermont Foot, but they only want him as back up and that’s only going to decrease his value in the long run. I’m holding out for a higher fee or a loan with a promise of more regular football before I let our towering centre back go. 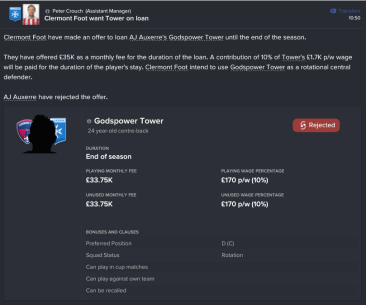 Bourg-en-Bresse are our next opponents in a 1st v 2nd title showdown. It’s unfortunate for the league leaders that they’re our first opponents in Ligue 2 since my own personal diabolical Christmas period, because I’ve got a lot of frustration to take out on them. I’ve not seen my cats in weeks and a win over Bourg-en-Bresse would be extremely therapeutic for me. Let’s get the second half of the season started off right, shall we? 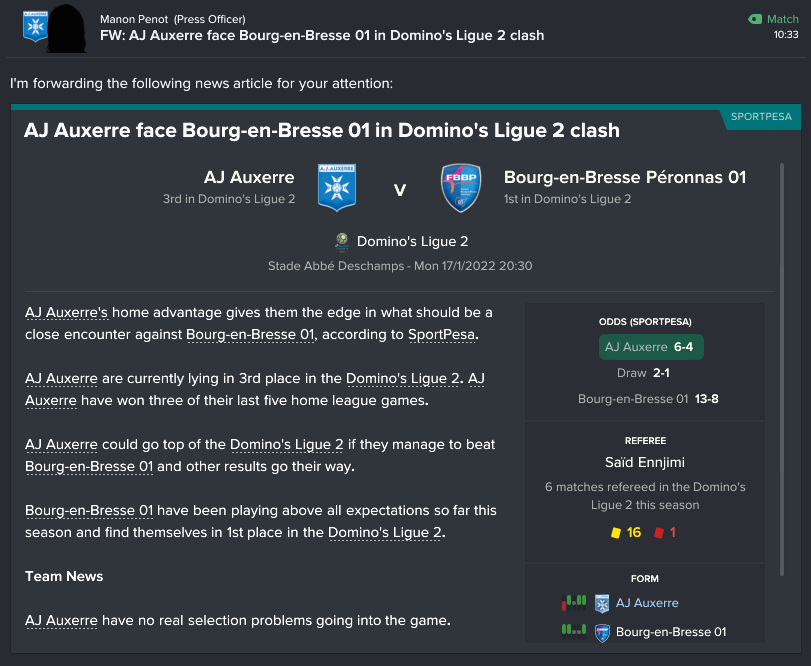