Come at me, Bourg.

Side note: Morning! I’ve got a quick favour to ask of all you fine folks: I’m going to start posting these story episodes on the r/footballmanagergames subreddit again as they’re starting to feature FM stories based on the amount of upvotes the author gets on their post. Becoming featured could allow me and this story to reach a lot of new potential readers, so if you have a reddit account and a spare second, I’d really appreciate it if you’d follow this link and upvote one of my posts! Cheers and enjoy the episode!

Do you know what I’m most proud of about this season? Because it’s not our undeniable overachievement in the League and it’s not our almost unparalleled defensive and offensive goal records either. It’s Phil bloody Foden. It genuinely could’ve gone either way when I brought him in and I’d never spent as much as £500k on a player before, which would’ve made signing him a big mistake on my part if things hadn’t gone to plan. Before this season he’d barely played competitive football in his career, instead being a stalwart for Man City’s youth teams as a sort of luxury number 10. He’s really started to shine in Ligue 2 though and that’s why I’m so proud. In fact he’s already on 9 assists for the season and will almost certainly break Jérôme Mombris’ club record of 12 from the 2018/19 season before the final game. His impact has been especially noticeable in our few games since the winter break, not because of his goal and 3 assists in those 4 matches, but because of his obvious growing intelligence as a right sided inside forward. As I heard one pundit* astutely observe recently, “How satisfying is it seeing him utterly nailing the inside forward role to perfection, especially after his early struggles? On the ball, he’s cutting inside and dragging defenders with him before slipping clever reverses through to Aidir. Off the ball, he’s making darting far-post runs and getting tap-ins. Lovely stuff.” Good lad, Phil.

Today we host ESTAC Troyes, which I’ve really been looking forward to. After our recent humbling defeat in Bordeaux this really is the ideal match in which to bounce back. We’ve got a fantastic record against ESTAC Troyes in our previous 3 encounters under my stewardship, winning on all 3 occasions. Let’s hope we can make it 4 out of 4.

Today though I’ve got a bit of a headache because I’m not quite sure how to line up against them. I attribute a lot of our success this season to the fact that in pretty much every match I’ve set up primarily to nullify the opposition, whether that means playing 3 at the back and man marking their front 2, playing a narrow formation to strangle the opposition’s central players, etc. But I’m not sure how Troyes will line up. They’ve been a bit all over the place recently, having used a 4-2-3-1, a different 4-2-3-1 with deeper central midfielders, a 4-1-2-3 and a flat 4-3-3. In the end though I remember the words that dear old Ms Alexandersson bestowed upon me: “Don’t overthink it.” Why should I try to nullify Troyes? We’re going with our new and improved attacking variant of Project: Meatloaf and they can have a good hard think about how they’re going to deal with us. I’m making a couple of changes from the team that lost in the cup: Aguilar and Goujon are both suspended but conveniently Samba and Raf are back from their suspensions, so they come back in at right back and centre midfield respectively. Phil Foden’s shaken off the sniffles so he comes back in for Adama Ba on the right, with Zoun swapping back to the left where he’s recently impressed. 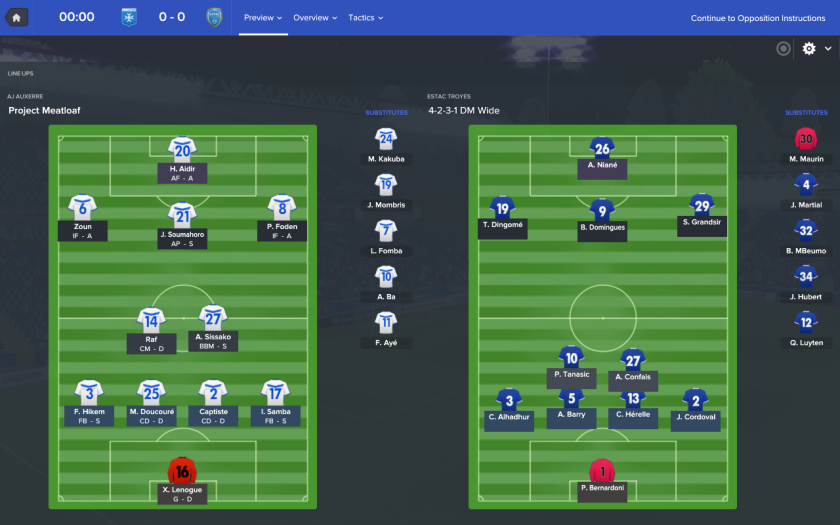 The first half is a quite horrible experience. Troyes do set up in a 4-2-3-1 with deep midfielders which I don’t mind, but what really ruins my plan is the weather. It’s a bitterly cold day with sleet pelting the pitch. The surface is slippery and not ideal for dribbling or playing the ball on the deck, which is what we’re trying to do. We do get a chance with about 5 minutes to go before the break when Sissako passes to Foden on the edge of the box though. Phil turns onto his left foot and rifles a low shot towards the far corner, but the ball cannons back off the post, rolls across the line and is cleared before Aidir can knock in the rebound.

At half time I decide that we need to go more direct because of the conditions. Aidir will play as more of a target man and we’ll knock the ball up to him quicker. With half an hour to go though the scores are still level. Joël makes way as we’re bypassing him anyway and Florian Ayé comes on as a second target man in a 4-2-4 formation. Foden and Zoun swap flanks and will try to get more crosses in to the big lads as out and out wingers.

Not even 2 minutes after Ayé’s introduction, Foden stands over a free kick 25 yards out on the right. He chips a cross in towards the penalty spot towards Ayé, but Samuel Grandsir leaps in and clears the ball. All of a sudden the referee blows his whistle and points to the spot. Penalty! The ref judges Grandsir to have raised his foot too high, but I have to say I’m really surprised he’s given us that. The winger’s boot was nowhere near high enough to be a danger to Ayé. He’s 5’6″ for fucks sake, he’s surely physically incapable of kicking anyone in the face. I won’t look a gift horse in the mouth though and with Troyes’ manager Oscar Ewolo still fuming nearby, Ayé steps up himself and buries the ball into the bottom corner from 12 yards.

10 minutes later I bring on Adama Ba for Zoun on the right wing and within minutes he nearly makes just as much of an impact. Another Foden free kick, this time out on the right wing, is flicked on by Sissako and headed by Ba at the far post, but he hits the post. With 5 minutes to go we look to control the game and hopefully kill it off. There are a couple of late chances though, firstly in the 91st minute when Hubert tests Lenogue from 20 yards and forces a decent save, then a minute later MBuemo fizzes a shot across the face of goal. Lenogue doesn’t even move and looks even more relieved than I feel when the ball goes just wide of the far post. I’ll take the 1-0 win, even if it doesn’t feel all that deserved. 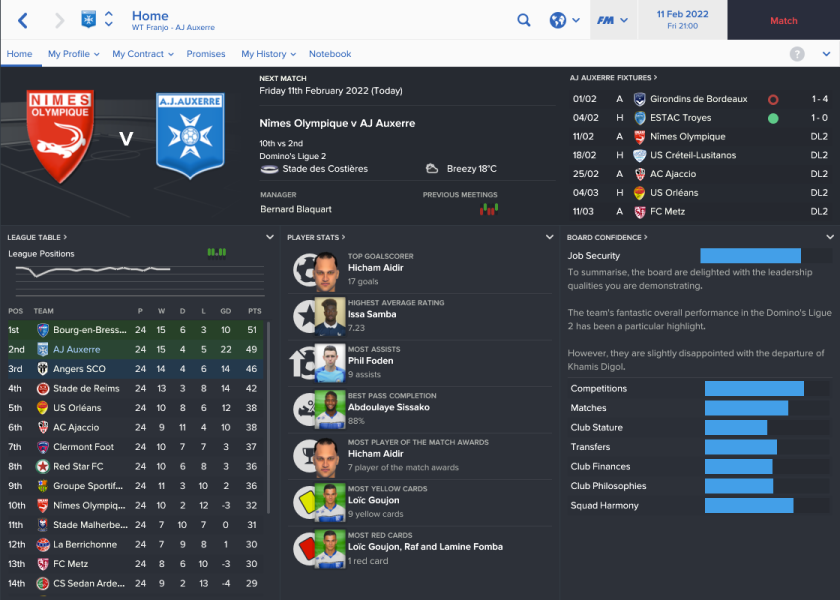 With that result in the bag though we’re unbeaten in 6 league games, which is a great feeling. Xavier Lenogue will be feeling the best of us all as that result takes him to 14 clean sheets; A new club record. 13 of those have been in the league too and he’s closing in on the Ligue 2 record of 15 in a season, which was set by Darko Dejanovic of FC Metz last season.

The week that follows is full of club news: Firstly Jérôme Mombris is hanging up his boots in the summer. It’s a wise decision in my opinion. He was obviously a very good full back in his pomp but his 30’s have taken away any pace that he might have once had. In my opinion though he’s still got a bright future, possibly as a coach, assistant or even a Manager. I may even see if he wants to stay on at the club in some capacity in the Summer.

A few days later I find out that a takeover may be on the cards too, which is always exciting, if a bit disruptive. The club’s Chinese owner Zhou James is looking to step down and there’s rumblings of some local investment. Watch this space, I suppose.

Our next match, which marks Abdoulaye Sissako’s 100th for the club, takes us to Nîmes Olympique for another reunion with Isaac Sohna and his temporary teammates. Nîmes are sitting comfortably in mid table but after our 3-0 win in the reverse fixture I’ll be looking for another comfortable victory today.

We’re almost unchanged today, with the exception of Captiste, who’s suspended and replaced by Mike Kakuba. Mike’s been very patient this season, watching on from the sidelines as I build a solid defence without him. It hasn’t really helped him that although our full backs and central midfielders need shuffling literally every match because of these silly suspensions, our centre back pairing has kept their powder pretty much dry until this point. Captiste’s absence doesn’t just have big consequences for Mike though, because as our captain sits in the stands we need somebody else to turn to for leadership. Hicham Aidir, Auxerre vice captain, takes the armband for the first time. 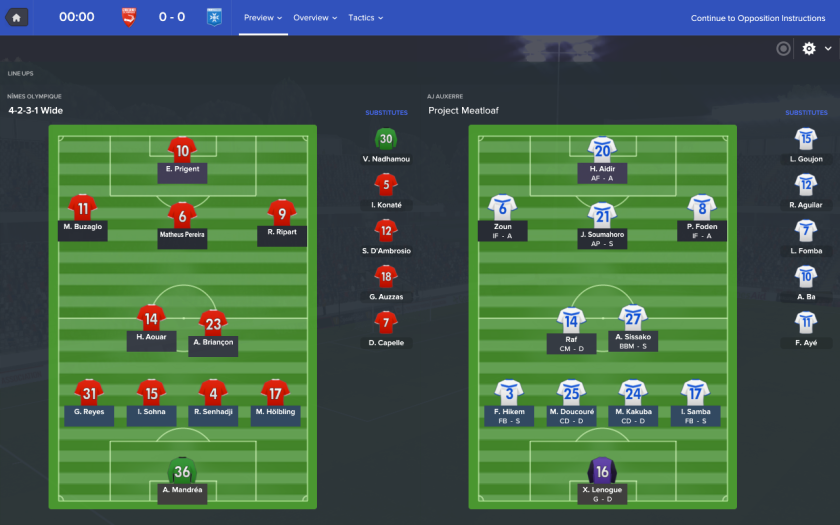 The first real chance of the match falls nearly 20 minutes in after our corner’s cleared by the Nîmes defence. Samba plays the ball to Raf, who passes short to Zoun, cutting in from the left as usual. As the hosts hesitate to close him down, the Burkinabe winger has time to take aim and fire – into the far corner of the net. It’s a great start and an even better finish.

The home side might peg us back 10 minutes later, but when Buzaglo sends a 35 yard free kick soaring into the box, Doucouré clears it firmly. Raf receives the ball and looks up to see Phil Foden tearing into space on the left wing and picks him out with a superb long ball. Foden pulls it back to Zoun, who tees up Sissako, and the 100 match graduate drills the ball home to put us 2-0 up.

That’d be enough for me in an extremely dominant first half, but we don’t relent. 5 minutes later Foden floats a free kick into the Nîmes 6 yard box and the keeper comes out and misses the ball. His defender bails him out by heading it clear, but only as far as Joël, who nods it down so that Zoun can smash the ball into the empty net. We head in for the break with a deserved 3 goal lead.

As we approach the hour mark the cherry is well and truly placed on top when a quick passing move culminates with Joël teeing up Sissako on the edge of the box before the man of the day fires in our 4th and becomes the 2nd player to bag a brace. Satisfied with a job well done, I replace our booked pair Hikem and Raf with Goujon and Fomba and we see out the game without a problem. 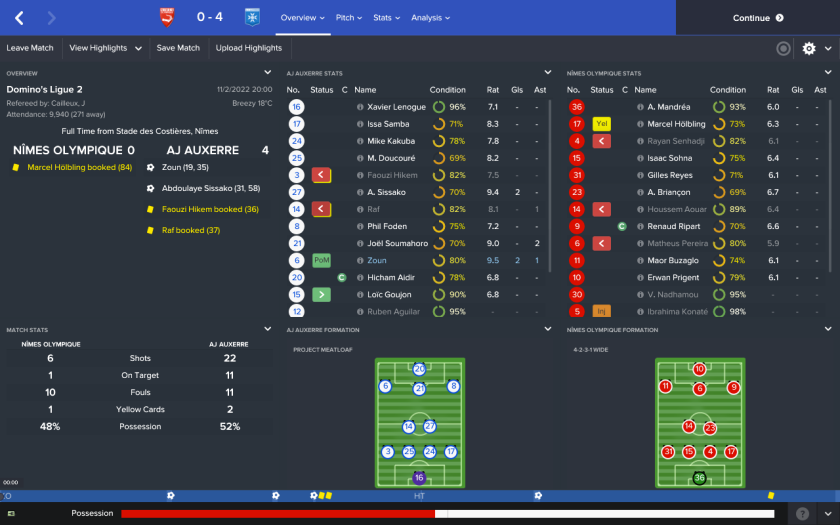 I obviously single out Sissako, Joël and Zoun for praise after the final whistle, but this has been an excellent team performance. I suppose the downside of our aggregate 7-0 win over Nîmes this season is that Isaac Sohna has really failed to impress me, which is worrying. He is definitely improving but if all goes well we’ll be in Ligue 1 next season and if he can’t cut it at this level… We’ll deal with that in the Summer. All that matters today is the 3 points, which combined with Bourg-en-Bresse ‘s 1-1 draw against Ajaccio leaves us sitting atop the league. We just need to try and stay here this time. Come at me, Bourg. 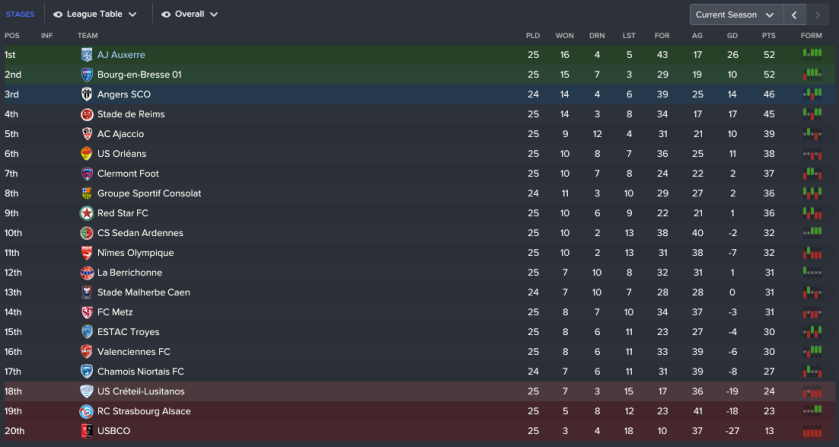 One thought on “Phil-led With Pride (Franjo: A Journeyman Story – Ep136)”