We aren’t meant to be here.

I close my eyes and press my fingers to my temples. I wish this fucking takeover would just happen or just not. For the last 2 weeks all I’ve heard is “Takeover off”…

…Over and over and over again. Either cough up the funds, Sundberg, or don’t, because you’re making a really fucking bad first impression. I’m already sick of you and you’ve not even started setting me unreasonable expectations or selling my best players yet.

In better news though, both Joël Soumahoro and Hicham Aidir are thought to be in contention for the Ligue 2 Star of the Season award. In my eyes it’d be richly deserved if either of them were to win it. 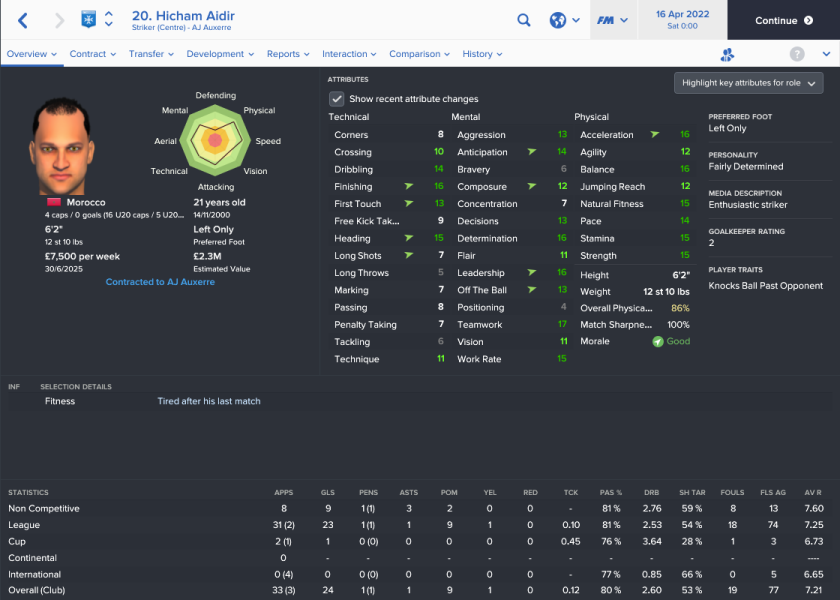 And there’s also high praise for our unflappable skipper Captiste from Laurent Blanc, who’s been praising him on 90min.com. For an Auxerre centre back, it doesn’t get much better than that.

But there’s an elephant in the room. Several actually. It’s a big room. We face RC Strasbourg Alsace today at their place and for so many reasons it’s a huge, huge match. Firstly, a win here in Strasbourg would set a new Auxerre points record.

Thirdly, anything but a win could effectively end our title push, allowing Bourg-en-Bresse to open the gap between 1st and 2nd to 6 points. Fourthly, Strasbourg are bottom of Ligue 2, so we’d deserve to lose all hope of winning the title by losing against them. Lastly, and by far the most importantly when all’s said and done, a win here today would seal our Promotion to Ligue 1. When you take out all of the other shit, this is what really matters. Promotion to Ligue 1. Home of PSG, Monaco, Marseille, Lille and Lyon. Home of Auxerre. Home of Franjo. Now wouldn’t that be something.

“Listen”, I begin. I’ve scheduled an emergency team meeting to say a few words ahead of the big match. “We aren’t meant to be here.” I grin and a few of the Auxerre lads chuckle. “We’re the team that survived relegation last season. We’re the team that was meant to be safe and steady this year.” I’m talking as calmly and as kindly as I can. As I do, I wonder to myself whether I actually mean the words I’m about to say. “If we don’t get this promotion, it’s no big deal. OK?” I see a few players relax. “We aren’t meant to be here.” I say again. “But because of your hard work we are.” I smile again, looking around at the players. “Give it your best. Don’t overthink it.” I wink and head for the door as the players cheer, shout and clap their approval.

We will of course be serving Meatloaf today with a side of victory. Adama Ba’s back in full training but isn’t fit enough to start, so we go mainly unchanged, with the exception of Aguilar, who drops out and is replaced by Issa Samba, who’s back from suspension. I was hoping to see Fabien Fonrose in action today, the young centre back that Strasbourg have taken on loan from us, but he’s ruled out with a groin strain and won’t feature.

I’ll be honest, Strasbourg’s decision to line up with a 4-4-2 takes me by surprise. The last time we met they opted for one of the oddest looking 3-2-3-2 formations I’ve ever seen, but I suppose they have sacked Manager Frédéric Varela and replaced him with Sébastien Roi since then, so I shouldn’t have expected a repeat performance. I do consider scrapping Project: Meatloaf and going for Project: Burnie Mk III, which is more suited to playing against such a shape. I’ll leave that idea in the back pocket for now though, because against the worst club in the league Meatloaf should be fine.

22 minutes in, Kljun’s corner is headed clear by Goujon and picked up on the edge of the box by Rúben Vinagre. The left winger takes the ball down and fires it along the floor, beating Lenogue and finding the far bottom corner. Bollocks, bollocks, bollocks. Lenogue should do better, but take nothing away from that finish. It’s a good goal and we might actually be in trouble.

5 minutes later though we respond with some of the most excellent 2-touch football I’ve seen from this side. We’re zipping passes around for fun, bamboozling the opposition midfielders as we touch and pass, touch and pass, touch and pass some more. About 10 passes into the move, Foden plays the ball inside for Joël, who slips it behind the full back for Zoun. He squares it for Hicham Aidir and we all know what happens next. 1-1. Absolutely beautiful stuff.

A couple of minutes after the equaliser RCSA want their lead back. They come forward but lose possession and we counter quickly. Aidir sprays the ball out onto the left for Zoun to chase. He takes control, gets to the byline and crosses to the far post, where Phil Foden lets the ball fall right onto his boot and volleys it into the back of the net. My fists pummel the air. This is more like it. This is the Auxerre that put us in the title race in the first place. That’s Phil’s 10th goal of the season too. Good lad.

A couple of minutes before the break we should go 3-1 up after some more sublimely slick passing. This time Fomba plays the final ball, slipping Phil Foden in behind the defence. Foden aims for the far corner but is denied by a tremendous fingertip save by Oukidja. We settle for the 1 goal lead at the break but I am making changes. Zoun’s had a terrific half but I’m going to do what I should’ve done from the start and bring out Project: Burnie Mk III. Ayé comes on replacing the winger and we’ll play on the counter, with Loïc Goujon dropping into central defence, Joël stepping back into a deeper playmaking role and Phil Foden playing behind the 2 strikers.

I should see the warning signs. Pretty much straight from kick off Kljun plays a long ball over the top of our defence for Robin to run after. He leaves Captiste for dead but our skipper manages to force him out to a narrow angle with a good recovery. He gets a shot away but Lenogue catches it easily at his near post. A minute later though, the hosts win a corner. Vinagre takes this one and chips it to the near post. As he does, Robin spins away from his marker, Captiste, controls the ball unmarked, turns and places it into the far corner of the net. 2-2. 10 minutes later my heart’s in my mouth as Aholou receives the ball in space and tries his luck from 25 yards, but his shot cracks off the bar and Samba manages to scramble it clear.

We stay level for the majority of the second half. Although the chance of Strasbourg dropping down to the division below are high, it’s not a certainty yet and they aren’t going without a fight. I don’t care though. I want this done and I want it done today so that we can at least keep pace with Bourg. I roll the dice. We’ll attack them relentlessly for the last 10 minutes and try to force the result.

In the 87th minute we’re playing some nice football once again. We could have one last chance. Hikem passes to Foden, who passes to Fomba, 30 yards out. Hicham Aidir’s level with the defensive line. Fomba tries to poke the ball through for him… But Hicham doesn’t make the run. He steps back to try to collect the ball to his feet and it zips right past him. It’s a breakdown in communication and the ball trickles slowly to a stop back into Strasbourg’s box. It’s over. Etienne plays the ball back to his keeper… And underhits it. In the blink of an eye, Aidir sprints into the box, beats both defender and keeper to the ball and prods it into the net. He’s done it. We’ve fucking done it.

Defensive lockdown ensues, with Sissako and Raf replacing Joël and Aidir and a 3-3-2-1-1 shape deployed. It works. We see out the match by the skin of our teeth at 3-2.

I can’t believe we pulled that off. A combination of my bad decisions and individual mistakes looked certain to cost us our spot in the title race, but Aidir’s come through again. We’re bloody promoted. Give that man the Star of the Season award. Give it to all of them.

As Crouchie, the coaching staff, the substitutes, the travelling fans and I spill onto the pitch to meet the players, I find myself unable to wipe the look of shock and amazement from my face. The noise is deafening and by the time I’m 20 feet onto the pitch I’m surrounded from all sides by the loyal Auxerre support, ruffling my hair and clapping me on the back as the stewards try to drag them off. Hit by sudden realisation, I ask nobody in particular “Bourg? What’s the Bourg result?”

I laugh with delight and celebrate with the fans. Bourg-en-Bresse bloody drew. This title race is still very much on. 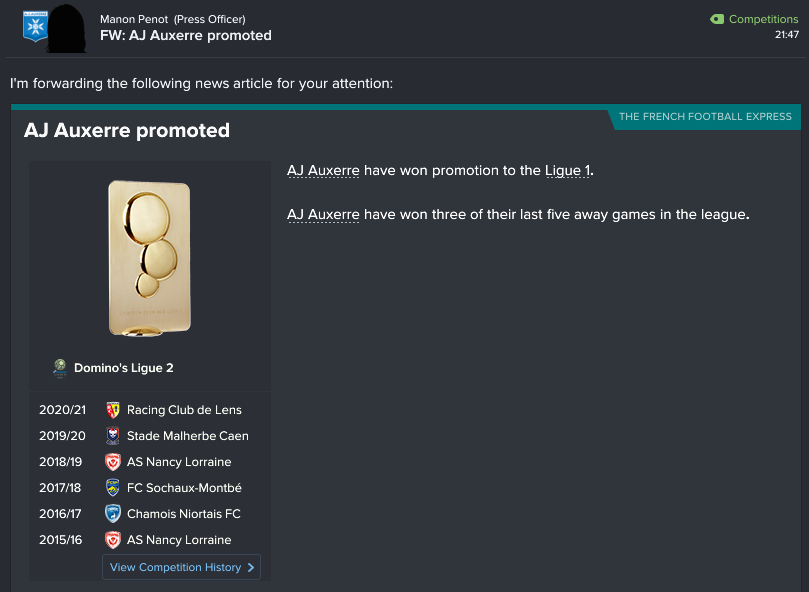