Let’s get this done.

Christmas is all well and good, but here in Auxerre we aren’t really stopping to celebrate. While many are stuffing their faces with mince pies, I’m hard at work securing my first signing of the upcoming January transfer window… It’s Alessandro Bassani on a new long term deal!

… Well give me a break, if we had fuck all to spend in the Summer we’ve now got fuck all’s bigger, smellier and generally more aggressive brother repeatedly punching us in our collective goolies. I spent most of our year’s transfer budget on our £675k capture of Fabien McCarthy, who started slowly but to be fair has impressed me since coming back into the starting lineup a few games ago. Our remaining budget’s been used up and then some by Arturo Vidal’s £20k per week contract, so I’m not expecting any incomings in this window. If possible I’d like to offer Mamadou Doucouré a contract to sign for us in the Summer, but unless I can get that wage bill down it’s unlikely. A couple of outgoings would be OK, but I receive the news that Zoun and McCarthy have been called up to the Burkina Faso and South Africa squads respectively for the upcoming African Cup of Nations with mixed emotions. With our squad depth being what it is I’m not a big fan of the type of outgoings where we lose senior players for a couple of months for practically no money.

We’ll be OK though as long as we avoid picking up any injuries. My heart skips a beat when I overhear the words “Torn hamstring” coming from one of the physios, but upon further inspection, he’s talking to Corentin Tirard. Yeah, we’ll be fine as long as we avoid picking up any injuries. Actually though that is a bit annoying because it’s not like I hate Corentin, I just don’t have a place in my squad for him. I would have loved to have been able to sell him during this window so that he could go and get himself some football and we could balance the books slightly, but again it looks like that’s not happening. 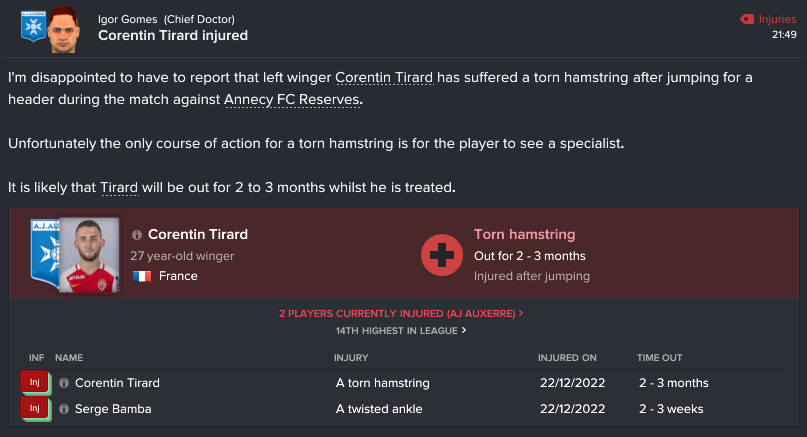 What makes this extra annoying is that his contract’s not even up in the Summer. When I first arrived in Auxerre the winger was one of our top performers and only had a few weeks left on his deal, so I obviously tied him down. Now though, it means that he’s still got 18 months left and I’ve wanted rid of him for over a year, so I’ll have to try and flog him in the Summer. The players whose deals are expiring in the Summer are backup Keeper Bingourou Kamara, ever-surplus-to-requirements centre back Fabien Fonrose, our retiring holding man Vidal, want-away winger Adama Ba and Raf, who I’m torn on. I like Raf and he’s always been fairly solid for me when called upon, but he’s below Vidal, Loïc Goujon, Abdoulaye Sissako, McCarthy, Lamine Fomba, Joël and probably even the on-loan Chancel Kasongo in the central midfield pecking order, so I think it might be kinder just to let him go and play consistently somewhere, in Ligue 2 for example.

As usual I arrange a friendly against our reserves to keep fitness levels up and give everyone a chance to impress. It’s a really tight game this time, with Foden going close with a couple of long rangers and Aidir hitting the post from a Billy cross for the second string before eventually the reserves’ Mike Kakuba turns McCarthy’s cross into his own net to give the 1st team the win.

Mike Kakuba by the way… And I’m not even sure how to break this… Has shaved his iconic mohawk. I didn’t even recognise him when he came back to training after Christmas. We might have a Samson situation on our hands though, because the day after the own goal he picks up an abdominal strain in the gym. Whether his mohawk was actually the source of his power or not we’re not yet sure, but I’ll keep you posted.

It turns out that the Domino’s Ligue 2 gives out some awards for the calendar year, which strikes me as odd in a league where by definition most of the best players and managers won’t be there anymore by December. Anyway, I pick up the Ligue 2 Manager of the Year award, which by the looks of it I might be able to have another crack at winning next year, while the Player of the Year award is given to… Hicham Aidir. Yeah, he was good in Ligue 2 wasn’t he. It’s great to be reminded of that.

The French best XI’s have been announced too by the fans. The lineup for this Season is almost identical to the one that I used in my first match against the Dutch, only with Kanté and Bakayoko out and Toisso put into midfield alongside Thomas Lemar. I don’t really blame the fans for shunting our 4 attacking midfielders into the same side but this looks a bit top-heavy to me.

The overall best XI is a little different though, with Umtiti preferred to Laporte, which is a bit of a head-scratcher, N’Zonzi preferred to Tolisso and the retired Olivier Giroud up top replacing Coman, with Griezmann out on the right. It’s still a pretty good side.

Then we have a bad day. A very bad day. A day that hits me like a tonne of bricks. Nathan Andre picks up a virus, ruling him out of the Sochaux match, and then Mamadou Doucouré breaks his ankle. He’ll miss 3 months. Arguably the most consistent defender of my Auxerre reign will miss over a quarter of the season. This isn’t good.

With only Captiste, Fonrose and Vidal at a push left as options at centre back, I’m calling for reinforcements. I hope you’ve made the most of your spell in Turkey Isaac Sohna, because I’m calling you up to the big leagues. The Cameroonian’s recalled as soon as the transfer window opens and could make only his 2nd competitive appearance for Auxerre when we play our Coupe de la Ligue Quarter-Final against Sochaux, having made his last appearance in our 2nd match of the 2021/22 season, when we beat Valenciennes using a back 3.

At the same time as I’m recalling Isaac though, I’m sending a few young ‘uns out on loan. 19 year old full back Brice Traore joins out Bosnian affiliate club Zrinjski, while centre back Rui Correia and winger Alain Kempf head off to join AS Poissy in the CFA. 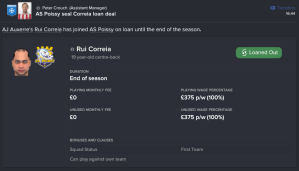 Going back to Cup matches for a second though, we’re also given a favourable tie for the French Cup 10th round, provided we can beat Créteil-Lusitanos in the 9th, against either Yzeure or Chamois Niortais. It’d be an away match but I’d still fancy our chances.

Our 2nd and final friendly of the break sees us welcome Zenit St Petersburg to the Stade Abbé-Deschamps. Sohna and Aidir both start for us, while 16 year old American winger Patrick Granger gets a place on the bench. With Zoun heading off for AFCON, there might be room for him in the 1st team squad over the next couple of months. The match itself is a bit of a microcosm of our season really. In a very even game we’re undone on either side of half time by the superior quality of Zenit’s striker Mariano, who heads the Russians ahead from a corner and then wellies in a free kick. We don’t deserve a loss, but that’s what we get.

We receive a couple of bids for fan favourite Ruben Aguilar in the wake of the match. Cagliari and Carpi both make offers that could rise to £650k, but I’m holding out for more. I’m prepared to let him leave if he wants to go but he’s been such a staple for the club for such a long time that it could turn the players and fans against me, so I may as well get a decent price for him.

Ba’s another man finally in demand and Mallorca offer him a pre-contract to join them in the Summer. He agrees to the move but as he won’t be playing here between now and then, I arrange a £50k fee for the Spaniards to take him off our hands immediately. Good riddance.

But of course, then comes the inevitable knock-knock-knocking on Franjo’s door. A lot of the lads are unhappy that the loss of Ba, who hasn’t played for us all season, leaves us light in midfield. After pointing out that we’ll be relying on our youngsters though, the mutineers embarrassedly shuffle back for the door, content with my strategy.

With our Quarter-Final looming, I reject one last bid for Ruben Aguilar. It’s a loan offer from Zorya, but if I’m letting him leave he’s leaving for good. If we don’t get a serious permanent offer this window he’ll come back into the squad whether he likes it or not and I’ll boot him in the Summer.

So assuming for now that Aguilar is going out the door, this is our squad for the second half of our season. It could certainly be stronger: 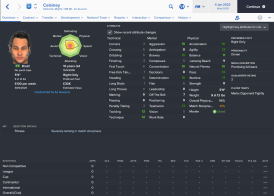 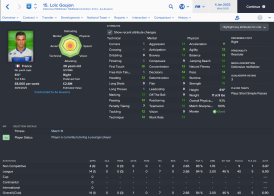 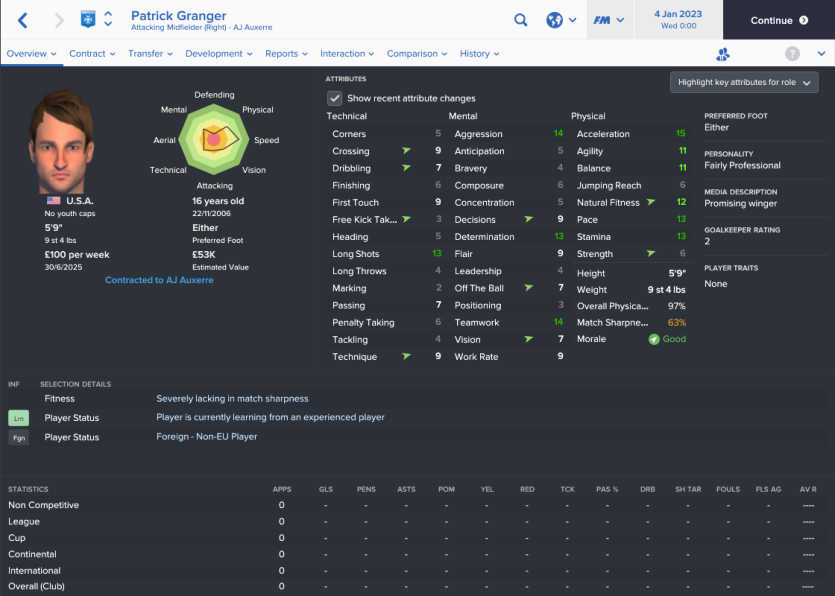 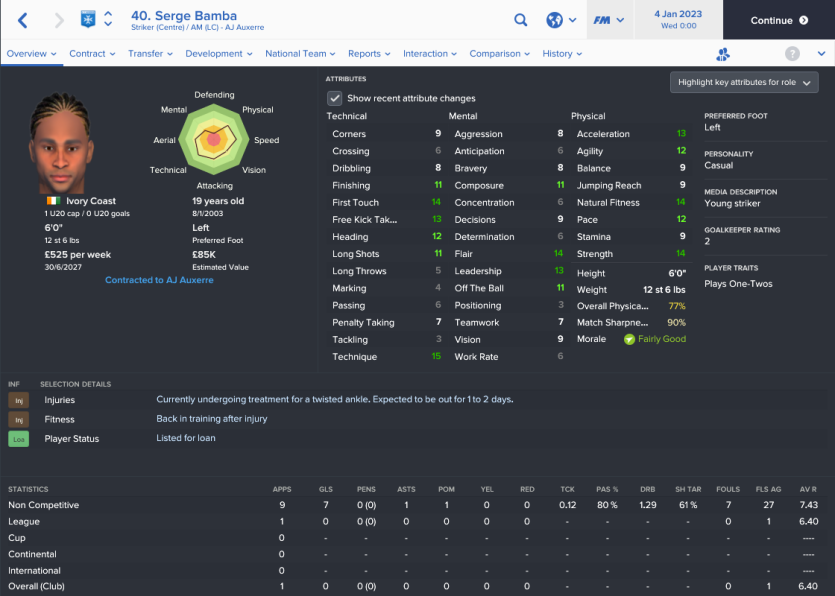 One thought on “Still Here (Franjo: A Journeyman Story – Ep160)”