Today’s one of my favourite days in the footballing calendar. 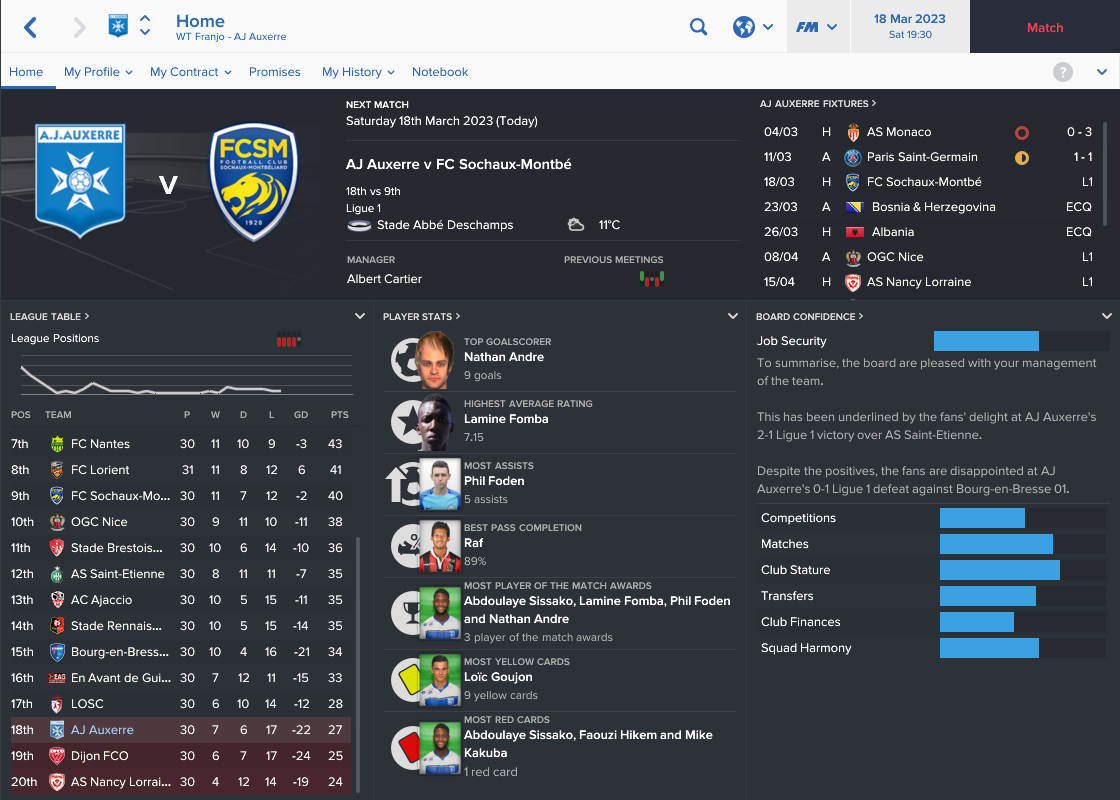 I wince as goal number 3 goes in and look over to Auxerre’s Head of Youth Development, Boguslaw Pietrzak. His head’s in his hands and it’s no surprise. Today’s one of my favourite days in the footballing calendar: The U19s v Youth Candidates match, where we weigh up our potential new recruits. The match starts well enough, with 2 of the potential “Stars” of the academy starting for the youth team: 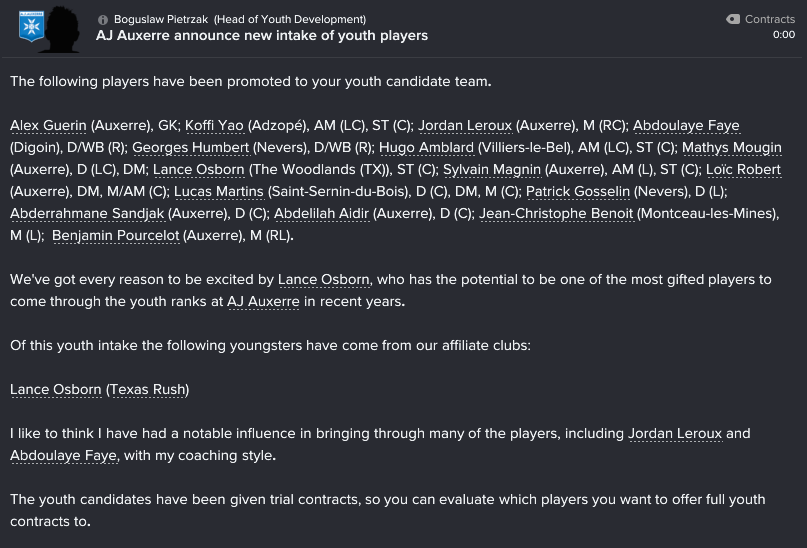 Jordan Leroux, a young playmaker who I’ve been promised has excellent technique and balance. He’s not really enough of a grafter yet to be a potential first teamer but at 14 there’s plenty of time for that to be coached in… 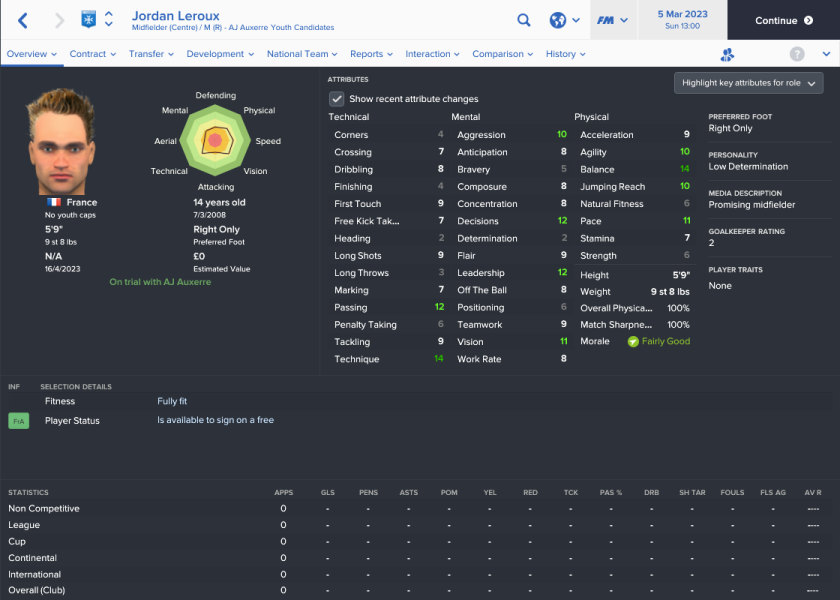 … And Lance Osborn, an American striker brought in through our affiliation with Texas Rush. Like Jordan, Lance isn’t really a grafter and will need to raise his work rate, but he knows where the net is and that’s certainly a start. 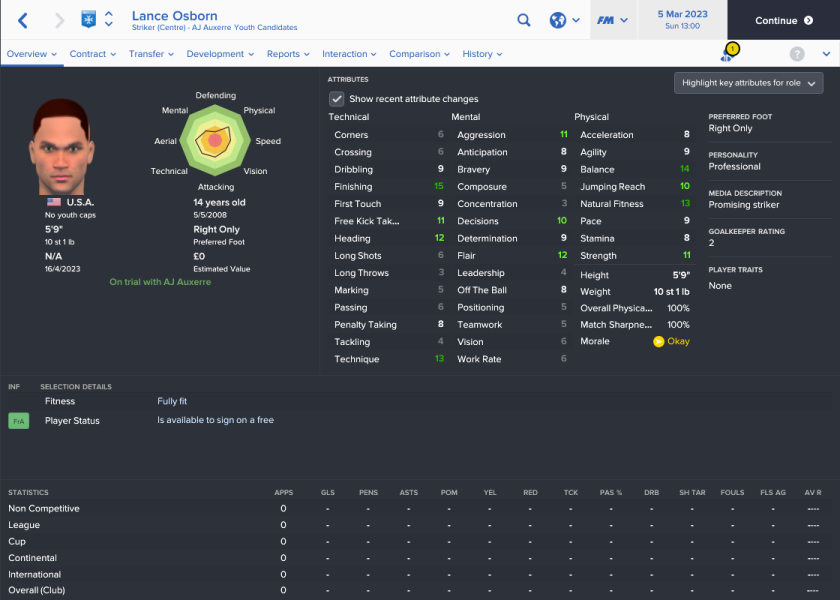 After 35 minutes of the match though one lad in particular grabs my attention for entirely the wrong reason. Badaoui fires a speculative 25 yarder at youth keeper Alex Guerin and it should be a routine save, but the young stopper spills the ball over the line. In the second half, the other 2 players that I’m paying special attention to come off the bench: Abdoulaye Faye, a pacy and skilful wingback who needs to work on his technical skills… 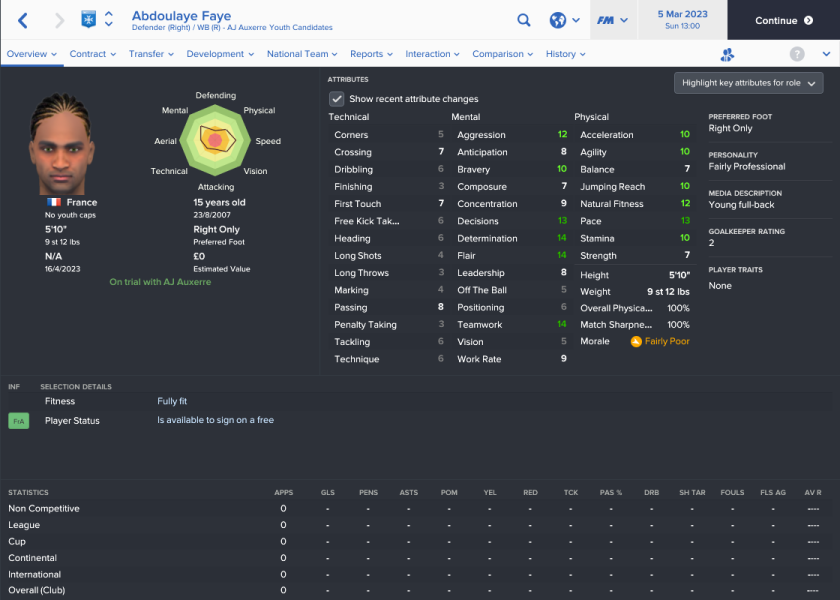 … And Sylvain Magnin, another young striker and someone very much in the Franjo mould. He’s determined and also knows where the net is, so for my money is probably the most promising of the lot.

With 20 minutes to go I’ve all but forgotten about young Alex Guerin’s mistake in the first half, happy to put it down to nerves, but then he fluffs another equally non-threatening shot from Badaoui and leaves the striker with an easy tap in from the rebound. 15 minutes from time a free kick from the U19’s Kouassi is curled into the box, flicked on by Guillaume and Guerin’s in no man’s land. He comes out and misjudges the flight of the ball, allowing our young Texan centre back Daniel Garza to tuck in the 3rd. 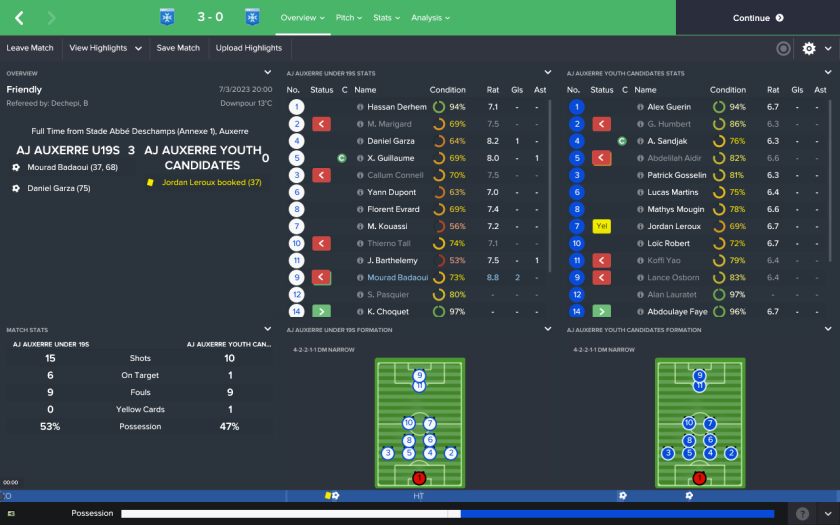 “Alex is usually better than this,” mutters Pietrzak from behind his hands. I chuckle. We’ll give him a deal anyway and put it down to an off day until we’ve seen a bit more of him. I should also mention that although Abdelilah Aidir is among the ranks of our newest recruits, he’s no relation of Hicham’s.

With just one Ligue 1 match to go before France’s first qualifying matches ahead of Euro 2024, I desperately want to make it count. The horror show of our 3 consecutive matches against the 2 best teams in the league is over and we’re 1 point better off than I thought we’d be, but now we’ve got an excellent chance to kick on with a home tie against Sochaux.

The goalscorer from our 1-1 draw with PSG, Lamine Fomba, makes the team of the week for his contribution. He’s still not the most consistent midfielder in the squad, but on his day he’s certainly one of our best. Needless to say, he immediately twists his ankle in training after this thought crosses my mind and will miss 3-5 weeks. 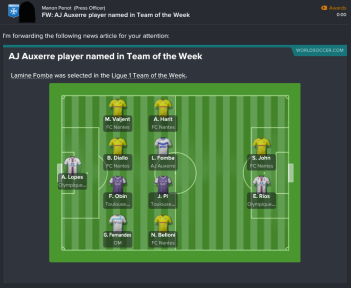 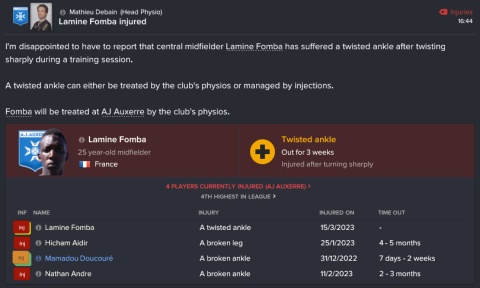 An interesting option to replace him happens to present himself just at the right time though: Mathis Roux, a participant in last year’s Youth Candidates match, has just turned pro. The young playmaker could well be the most promising youth player currently at the club so I’m eager to get him into the squad. 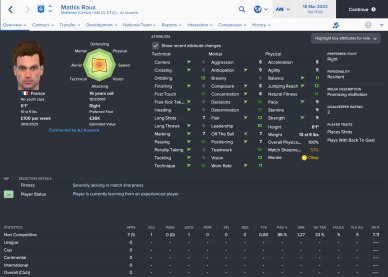 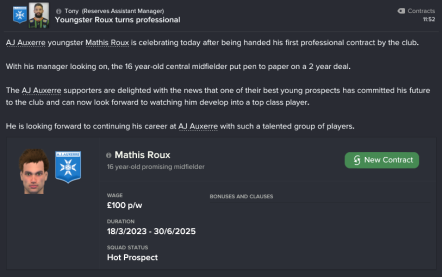 The Guingamp Chairman Bertrand Despiat’s in touch, hoping to lure me in for an interview. I wish Chairmen talked to each other a bit more though because practically every one of his counterparts in this league would be able to tell him that I’m not bloody interested.

I also get a fair few applicants for the vacant assistant manager’s job including Crouchie’s predecessor Raphaël Guerreiro, but none of them appeal to me. Bechkoura will keep his temporary role for now.

Sochaux, then. Sochaux are probably the best team we could possibly face today, especially at home. We’re in poor form having not won in 6 games, but our opponents haven’t won a match in 2 full months. Their early season tag of “Overachievers” is rapidly wearing off and I can’t think of a better side to use as a springboard back to form. 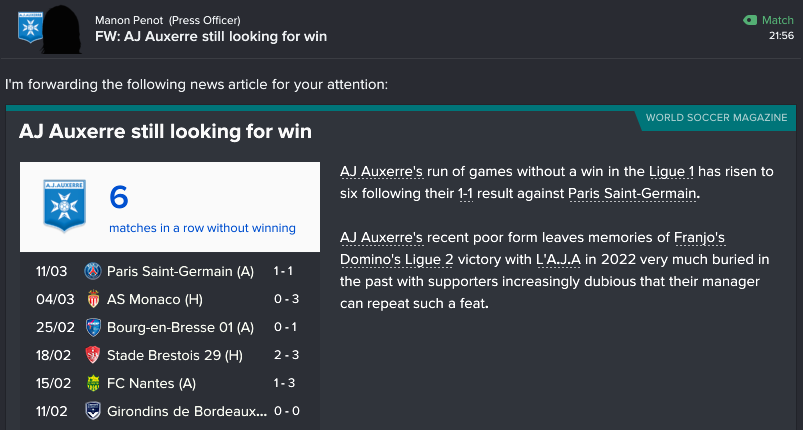 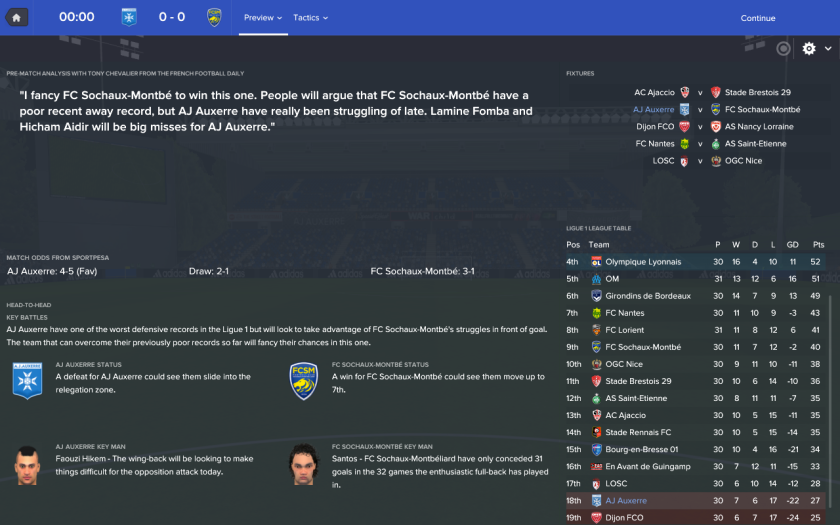 We’re going to keep it simple today. We beat Sochaux with Project: Burnie Mk V (Wingbacks) in the cup, so we’re doing the exact same thing again. We’ll look to control the game and play with fluidity. Sissako and Zoun are in the starting XI replacing Fomba and Goujon, while Mathis Roux makes the bench on his 16th birthday. 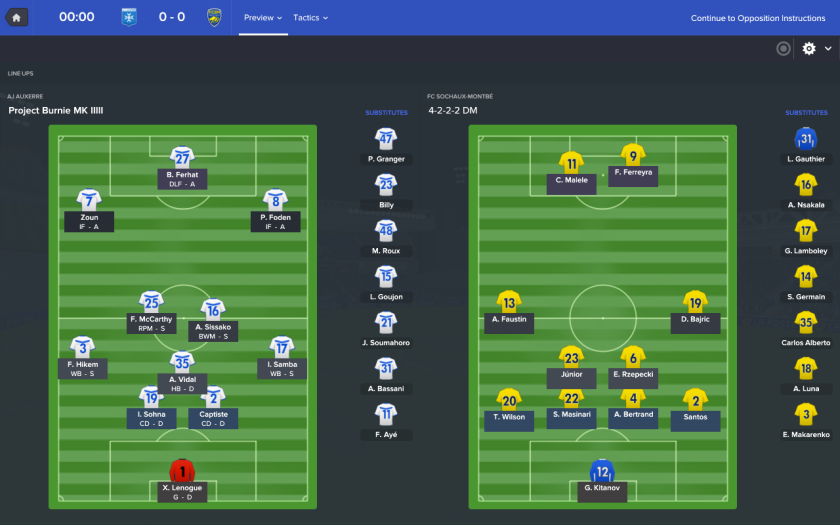 13 minutes in Brahim Ferhat almost accidentally gets us off to the perfect start when Phil Foden’s 20 yard shot deflects off our striker and bounces back off the inside of the post. With thudding inevitability, Bajric finds space on the right wing for Sochaux 4 minutes later and whips in a cross, which Malele directs into our net to open the scoring. It’s not ideal but we’ll try and open up a bit more and express ourselves to impose our dominance on the game. 6 minutes later however, Malele doubles his tally with a carbon copy of his first goal, with Bajric again getting the assist. We go on the attack but our last game before the international break seems to be over after only 23 minutes.

I lay into the players at half time. We’ve not even started playing yet and it’s so frustrating to watch us flail about when we’ve got so much potential. The second half starts off with a bit more promise. Sochaux do get a chance when Faustin drives at the defence and shoots from the edge of the box, but this time Lenogue’s equal to it and holds onto the ball. Just as I start to get all optimistic though, a Júnior corner comes into our box and Sohna’s adjudged to push Bajric to the floor. It’s a soft, soft penalty call. It’s times like these that I think it’s a shame that VAR never took off. Melele steps up and slams the ball straight into the top left corner from 12 yards, inches out of Lenogue’s reach.

We’ve still got 25 minutes to win back some self respect with a goal or 2 though, so Bassani and Ayé come on replacing Foden and Zoun, with Ferhat going over to the left wing. With Bassani’s pace and directness combined with Ayé’s hold up play, surely this will offer more of a… Bajric drills a cross in from the right and Facundo Ferreyra buries Sochaux’s 4th. Excellent. Good. Fucking marvelous.

Then it all starts to get a bit silly. With over 20 minutes still to play, Ayé’s dispossessed and Masinari hoofs the ball upfield on the counter attack. Sochaux sub Germain beats Captiste to the ball, goes one on one with Lenogue and rolls in a 5th. Ayé does manage to head in a consolation goal 2 minutes later when Kitanov comes running out of his net and flaps at Samba’s cross, but it’s of no real consolation. I throw Mathis Roux on for the last 15 minutes. Happy birthday, lad. I hope you grow up to be much better than this rabble. To his credit, Roux looks tidy throughout his cameo.

5 minutes from time, Sohna does just enough to ensure Malele can only hit the post from 6 yards out, but it wouldn’t have mattered to me if that’d been 1-6. This has been a real wake up call. Gutless. Pathetic. Absolutely inexcusable. I’m going to go off and take care of these Euro 2024 qualifiers and then when I get back we’re tearing everything up and starting again, because if this shower don’t start improving fast, we’re fucking gone. 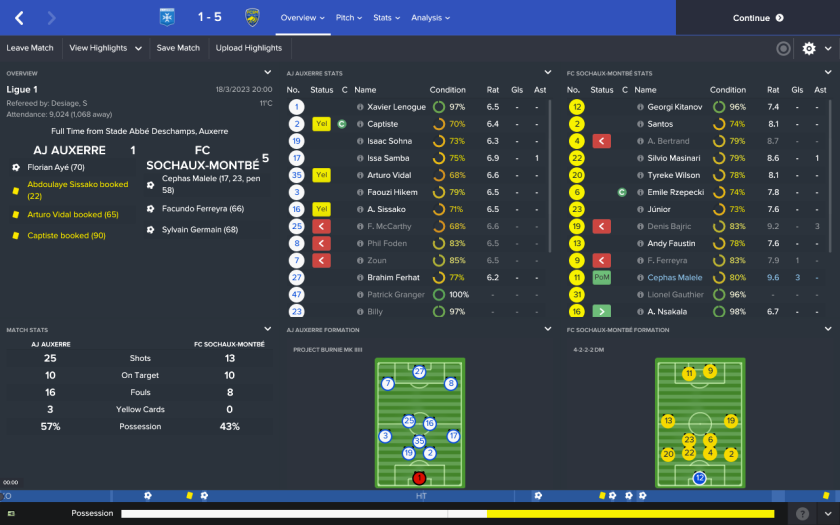 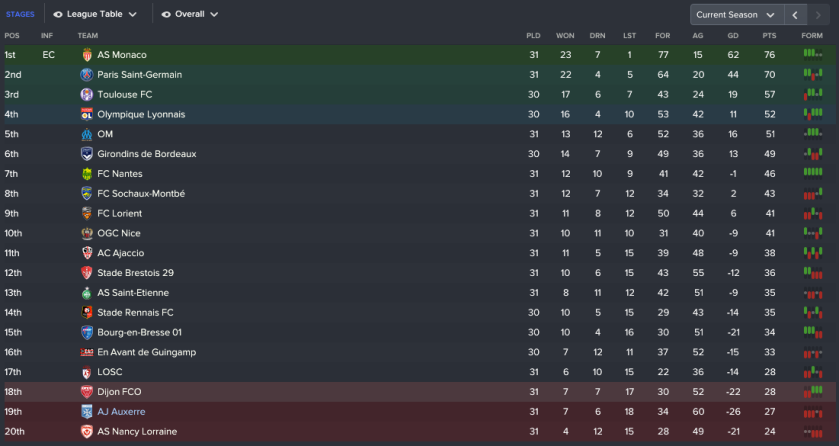