This is absolutely must-win.

7 matches left. That’s all. We have 7 matches in which to climb above Dijon and Lille and secure our future in Ligue 1 for another year. On paper it doesn’t look that difficult: True we’re not looking good, sitting in 19th without a win in 8 games, but both sides are just a single point above us. If we can just do enough to get that extra couple of points and make 17th place our own in 7 games time, I’ll be delighted. I also only have until the end of June on my contract with Auxerre and although I’m not sure where I’ll be next season, something tells me that if we don’t finish with our heads above water, I won’t have the option to renew it even if I want to. Hopefully we’ll finish this campaign better than we did our Coupe de la Ligue run, where we fell at the penultimate hurdle on penalties against Toulouse. They’ve just played the final against Monaco, who knocked out PSG in the other semi and in the end Vinícius Júnior proved too hot for Toulouse to handle, inspiring his side to a 3-1 win.

I’ve not been the only one that’s been busy over this international break by the way. Xavier Lenogue, Faouzi Hikem, Zoun, Raf, Billy, Fabien McCarthy and Isaac bloody Sohna all represented their countries this week, with Sohna making his International bow after an impressive first few months in Ligue 1 and McCarthy grabbing his first goal for South Africa. Those things can only help morale as we enter a crucial stage in the season.

We also have 2 massive boosts in the shape of Mamadou Doucouré and Lamine Fomba, who have both just rejoined full training. This comes with the slight asterisk that Xavier Lenogue’s picked up a gashed leg, although after consulting with the physios it looks like he’ll be able to play through it. 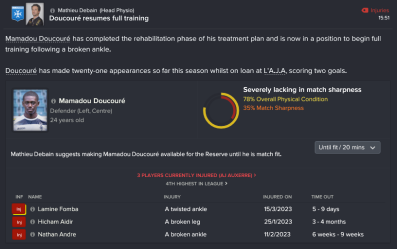 Even with the morale boost and a couple of key players coming back from injury though, turning round our horrible form is a tough ask. Our first match in April is a trip to Nice, a safe mid-table side who have certainly got the ability to pile more misery onto us. They play a 4-2-3-1 and are quite heavy favourites, so I’m going to give Project: “Sword” another try after it helped us secure a point against Pep’s Paris Saint-Germain a few games back. I’m bringing the goalscorer from that match Lamine Fomba straight back into the lineup to see if he can do the same again. Inside 8 minutes, Godefroy receives the ball from a throw in on the right and squares it for Jean-Michael Séri on the edge of the box, so that the central midfield can smack the ball past Xavier Lenogue. Good start. The first half in general is pretty scrappy but Nice go close to a 2nd goal just before the break when Souquet’s cross is headed away by Samba as far as Pléa, who heads it at goal. Lenogue manages to tip the ball against the post and smother the rebound, but in injury time Séri finds space on the edge of the box once more and spanks the ball into the bottom corner to make it 0-2.

At half time I ditch Project: “Sword” and swap us back to Project: Burnie Mk V on the counter attack. Zoun comes on replacing Loïc Goujon and he and Ferhat will flank Phil Foden, who once again takes up the role of false 9. After 20 minutes of the second half though it becomes clear that we’re still not threatening nearly enough. I throw Florian Ayé on in place of Vidal and we go to an attacking 4-2-4. Within a few minutes I reap the rewards when Toral splits our defence with a through ball and Bosetti slips a 3rd goal under Lenogue. I’m at a complete loss. I can’t stop the rot. Nothing I try is working for Auxerre anymore.

Hoping for a miracle, I bring McCarthy on for the last 15 minutes and give Fomba a rest. The South African does set up a goal 5 minutes from time too, swinging a corner in that Captiste directs into the net to score his first Ligue 1 goal, but it’s too little too late. 1-3. 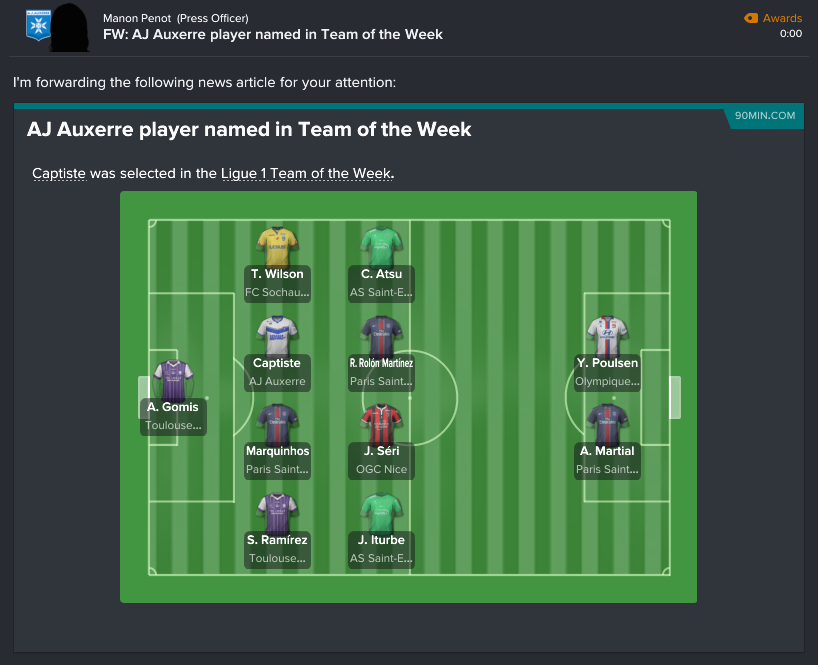 That result, combined with Nancy-Lorraine’s win over Lille, puts us bottom of the table for the first time this season. We’ve also gone 9 matches without a win in all competitions (8 in the league), which is level with a club record. The supporters are calling for my head and who can blame them. This has gone a bit tits up really, hasn’t it. I spare a moment for Hull City and what might’ve been, with their relative safety in the greatest league in the World. Me and Crouchie could’ve surely turned them into a safe Prem team… 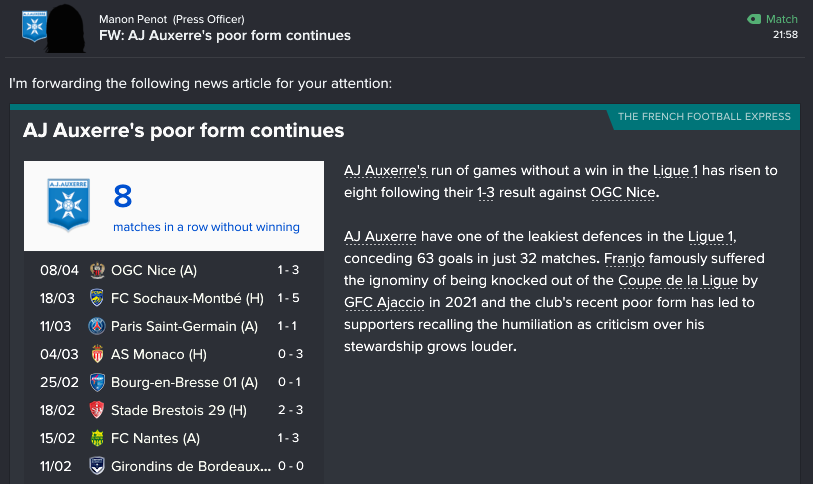 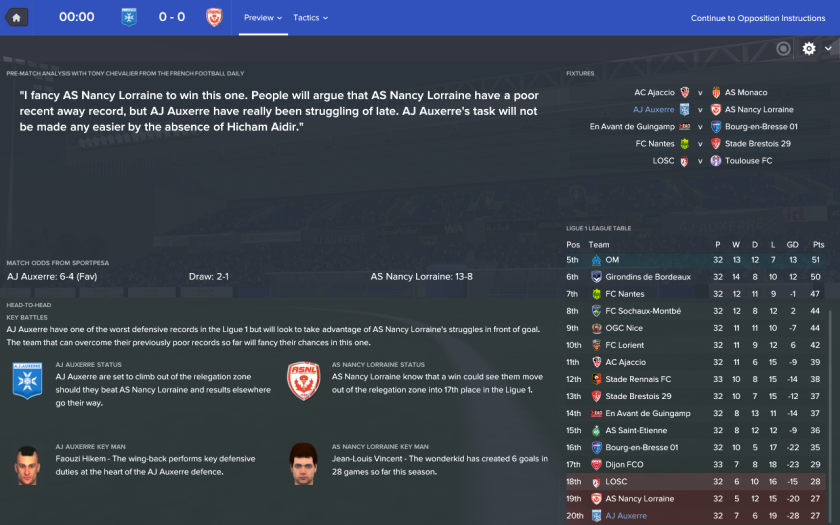 There’s only one way I know how to set up for everything-or-nothing matches. It worked at Katowice, it’s worked before at Auxerre. Fuck Project: Sword and Project: Burnie Mk V. Issa Samba’s suspended but I’m going with as similar a lineup as I can to our successful Ligue 2 side from last year. Celsiney’s in, Doucouré’s in, Joël and Zoun are in. We’re going to attack. We’re going old school. We’re going Meatloaf. 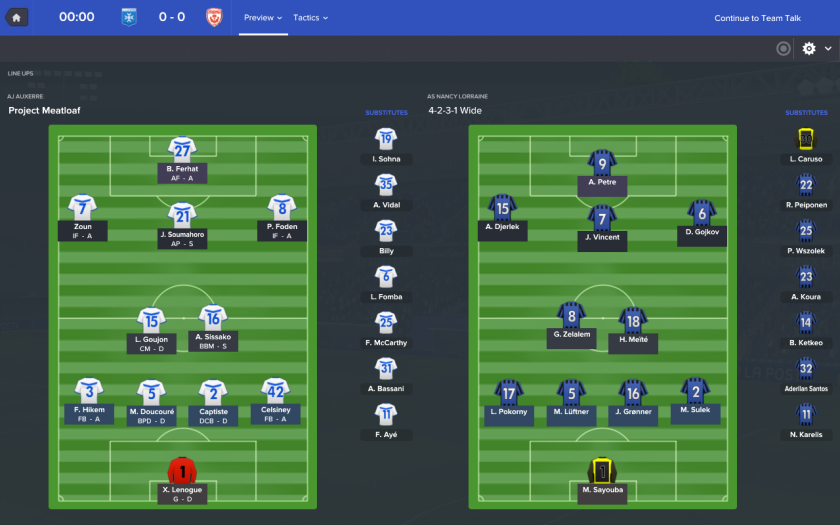 5 minutes into the match, a scintillating move ends with Zoun laying the ball off for Abdoulaye Sissako on the edge of Nancy’s penalty area. He smacks a shot towards the top corner and is denied by a top class save from Sayouba, who claws the ball away from goal. He can’t keep hold of it though and Phil Foden gets a shot in from a tight angle – He tucks it into the net. Leaping to my feet, I attempt to throw an arm around my assistant Bechkoura’s shoulders in celebration, but fuelled by the pure jubilation of actually taking the lead in a match, I end up getting him in more of an over-enthusiastic headlock. Come on boys. Hold on.

It feels like by deploying Project: Meatloaf, I’ve cut the chain that was restraining Auxerre. It all just feels so natural, the football’s brighter and quicker. The lads are smiling again. A few minutes after the goal, Brahim Ferhat receives the ball from Foden and skips away from his marker before shooting just wide from the edge of the box. After a quarter of an hour, Hikem whips the ball across the face of goal from the left and Foden nearly doubles his tally at the far post, but this time can only find the side netting. We’re excellent, we’re free-flowing and we’re looking almost certain to find a 2nd goal.

But then, as it often does, everything comes crashing down. Xavier Lenogue, who’s just recovered from his gashed leg, comes to collect a cross, collides with a Nancy attacker and goes down clutching his shoulder. I already know by the time he hits the floor that he won’t be able to play on. That’s how this second half of the season’s gone for Auxerre. The physios confirm my suspicion by removing Xavier from the pitch on a stretcher.

Those who’ve followed my career for some time will be aware that I’m of the opinion that a substitute goalkeeper is a waste of a place on the bench, as 99.99% of the time you’ll be better served by having an extra outfield player. That 0.01% really comes at the most inopportune times though, doesn’t it. The only other time I’ve been in this situation that I can remember was during a pre-season friendly with GKS Katowice, just before my move to South Africa. Danny Wilson went on to play in net if I remember correctly and did alright, so someone’s going to have to follow in his footsteps now in a far, far more pressured environment. We need someone who’s quite tall and agile, who won’t lose their head. I scan the pitch, then the bench, then the pitch again. I glance over towards the referee and see that he’s watching me with an eyebrow raised, tapping his watch impatiently.

“You’ll do fine,” I lie, strapping on our stand-in keeper’s gloves. “It’ll be a piece of cake, alright? Just do what Xavier would do, or Komo, or… Just don’t overthink it, OK?”

Isaac Sohna nods solemnly, looking completely unnatural in his long sleeved goalkeeper’s jersey and Lenogue’s gloves. Bingourou Kamara makes his way down to the front of the stand and leans over the railings just behind the bench. He calls Sohna over for a quick pep talk of his own before the referee gives a shrill blast of his whistle to signal that time’s up. The new Cameroonian international jogs over to take his place between the sticks.

My gut reaction to the change in personnel is to drop Auxerre back and defend resolutely to put more bodies in between Nancy’s players and Sohna. I’m almost certain that that’d be counter-intuitive though, as defending would only invite Nancy on and at the very least would lead to some pot-shots that could easily find their way past our keeper. Tentatively, I fight the urge and encourage the team to keep attacking. The more we attack their goal, the less they can attack ours. And at the very least we can try to out-score them.

Less than a minute after Sohna comes on, we do attack Nancy’s goal… But we’re caught on the counter attack. Petre pings a ball out onto the left wing for Djerlek to run onto and he drills a cross in for Vincent, who smashes in an equaliser on the turn. My stomach churns. I have to bite my lip to stop myself from giving the order to drop back and defend.

My faith is immediately rewarded. Straight from kick off, Sissako picks out Foden on the right wing with a lofted ball and Big Phil hits a cross straight into the box. Zoun tries to latch on but he’s shoved over clumsily by Sulek at the far post. Penalty! Captiste steps up confidently, places the ball firmly beyond the keeper’s reach into the bottom corner and puts Auxerre back in front.

A few minutes after that hectic exchange, we’ve calmed down a bit. Brahim Ferhat, whose link up play has been superb in the opening half hour, releases Celsiney on the right wing and then gets the ball back. He plays it straight on for Foden, who shoots and forces a good save from Sayouba. After a calm half time team talk we manage to pretty much kill the game off. Joël has a chance on the hour mark when he brings the ball down following a cleared corner and shoots straight at the Nancy keeper, but remarkably we don’t allow the visitors a single shot on target after their 27th minute goal.

When the final whistle blows, Isaac Sohna collapses on the floor, but for once it’s not because of injury. It’s the relief of coming through 65 minutes unscathed… Or at least just scathed enough for it to not matter. The rest of the Auxerre squad, bench included, run straight over to lift the young centre back over their shoulders as the home fans roar their approval. 4 months ago, he was turning out for Karabükspor in the Turkish Super League. Today, our stand-in Cameroonian International goalkeeper is a fearless Auxerre hero who’s helped us to end our winless run, rise from 20th to 17th place and finally back out of the Ligue 1 relegation spots. 2023’s proving to be a pretty eventful year all things considered, isn’t it.