“This is Florian Thauvin all over again, Franjo.”

Newest Short Story – “Listen To This”

“I beg your fucking pardon?”

“You can’t!” Says Bechkoura stubbornly. “You absolutely cannot call a Ligue 2 player up for France! The World Champions!”

“Well then I must be sacked on the spot David, as that’s exactly what I’ve done, isn’t it.”

“I actually wouldn’t be that surprised.” He says, exasperatedly. “You’ve left out Griezmann again for fucks sake, so that you can call up this ‘Gomez’…”

“This is Florian Thauvin all over again, Franjo.”

“Hey!” I shoot him a stern look. “We agreed not to mention Florian Thauvin. Besides it’s nothing like that and stop ‘forgetting’ his name like he’s a complete unknown. His team’s the top of the league, they’ll be in Ligue 1 next year. We both know it.”

“You need to be careful.” Bechkoura looks very serious now. “The public aren’t complaining because you’re winning. Against far lesser teams, but winning all the same. One bad result could blow up in your face if the team’s full of Auxerre and Ligue 2 players.”

Yes, so you can imagine what the papers have been saying this week. “Making a mockery of the national team”, “No respect for the shirt” etc. It’s water off a duck’s back though. Or water off a drake’s back. I grew up during a period of English football where a team chock full of international superstars from the top clubs in the land would offer precisely fuck all on the pitch, so I’m of the mindset that if someone’s putting in the performances, they deserve a shot. And vice versa.

We’ve got just the one change in terms of goalies in the squad: Alphonse Areola and the as yet untried Maxence Prévot keep their places but Loïc Badiashile’s replaced by Leo Gauthier, who’s picked up a bit for Sochaux. 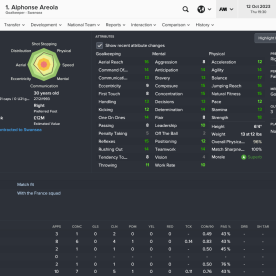 Our defence, quite rarely, remains completely untouched from our last get together. 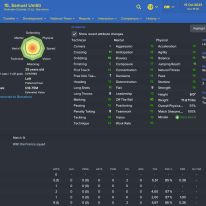 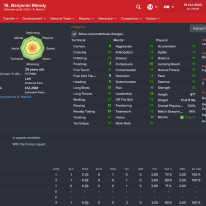 It’s in midfield where all the real changes are: Wylan Cyprien is left out despite an excellent debut as his club form’s dropped off and others have stepped up. Theo Hernández and Kylien Mbappé are out too. Kylien’s picked up a stress fracture on his back so my hand’s forced on that one, while Theo’s not playing much for Monaco. The aforementioned Lopez is in, alongside Adrien Rabiot and Ousmane Dembélé, who’s yet to really impress me but still has potential to be important for us. 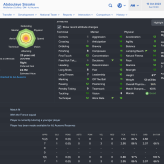 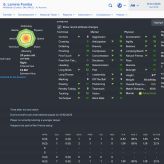 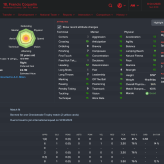 Up front, I’m not bringing Hervin Ongenda for these matches, preferring to give his spot to Neal Maupay despite his pretty anonymous performance in Lorient’s 1-0 loss to Auxerre. 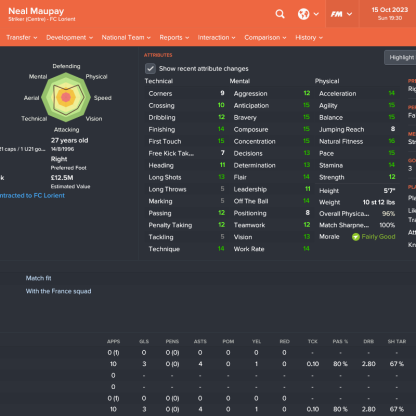 I’m granted a golden opportunity to get in a cheeky dig in at Liverpool before our first match of the break. Manager Antonio Conté tells the press that centre back Clement Lenglet deserves a place in my squad, but I tell them with tongue firmly in cheek that a move to a bigger club would help his chances.

It’s time to welcome Bosnia to Matmut Atlantique though and I’m fielding a strong team to hopefully secure another comfortable victory: Areola’s in net and will be guarded by Sidibé, Varane, Laporte and Digne. Tolisso and Rabiot will be our midfield duo while Coman, Pogba and Lemar start behind Moussa Dembélé. Captain Pogba by the way could become France’s all time top goalscorer today, as he currently sits level with Thierry Henry on 51 goals.

A perfect start. 40 seconds in, Digne’s driven cross from the left finds it way through to Adrien Rabiot on the edge of the box. The midfielder leathers the ball into the bottom corner to announce his return to the French squad.

Bosnia look strong at the back and we don’t have our usual flurry of first half chances. The closest we go to grabbing another goal is after half an hour when Pogba releases Lemar on the right, the City winger dribbles into the box and pulls the ball back for Moussa Dembélé, but the striker’s shot is tipped against the post by Piric.

There’s a chance at the other end a few minutes later when Stojanovic gets down the left and whips a cross in for Bihorac, who slips between our centre backs and hits the post with a close range header. The ball comes back around for Kozulj to have a crack, but our goalscorer Rabiot’s reacts quickly to slide in and deflect the shot wide.

We settle for the 1 goal lead at the break, having been really frustrated by Bosnia’s stubborn defence not allowing us to build up a head of steam and after an hour passes the scoreline stays the same. Neal Maupay and Lamine Fomba come on to try and inject some pace and creativity into our ranks, with Dembélé and Tolisso making way.

In the 77th minute, Coman cuts in from the left wing and dinks a nice ball right onto Pogba’s boot just inside the box. This is his chance for the record and to secure the win. Fomba takes it on the volley – Straight at Piric, who holds on. A few seconds later we get another chance when Sidibé wins the ball in midfield and curls a great pass behind the defence for Maupay to run after. He takes it towards goal and shoots towards the near post, but another good save from Piric denies him.

With 12 minutes to play I ignore Bechkoura, who I can feel staring daggers towards me, substitute Pogba and hand a first cap to Maxime Lopez in the number 10 spot. Pogba throws the armband to Varane and runs down the tunnel without so much as a glance towards me, so that’s going to be fun to deal with later.

I love football though. Not just because it’s so deeply ingrained in me at this point, but also because for all of the times that everything blows up in your face, every once in a while, everything comes together perfectly. In the 86th minute, Kingsley Coman plays a one-two with Lopez and receives the ball at a narrow angle to goal on the left, before slotting it home for 2-0. Lopez registers a debut assist to secure the win. Brilliant little bastard.

Masic misses a glaring opportunity with a couple of minutes to go by heading just wide from 6 yards out, but soon after the final whistle blows. It’s not the comfortable win I was looking for, but it’s a win.

We fly off the a couple of days later to take on Albania on their turf. I’m rotating the squad almost entirely for this one as some of the players could use a bit of a rest. Only Areola, Sidibé, Pogba and Coman remain in the side, joined by Upamecano, Umtiti, Mendy, Sissako, Bakayoko, Ousmane Dembélé and Maupay. 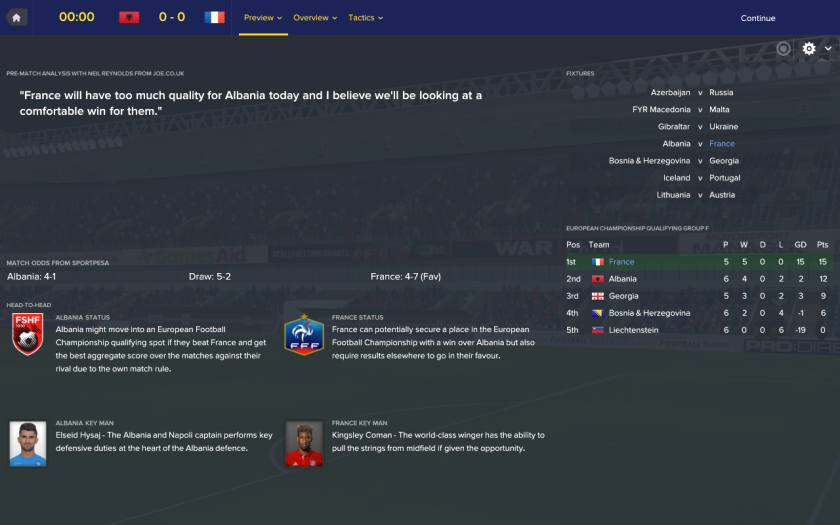 Maybe I am letting this squad slide too much, you know. The first half is drab and although we threaten quite a few times, they aren’t good chances. The breakthrough finally comes in the 42nd minute, but unfortunately it’s at the wrong end. Manaj finds a way past Sidibé on the left with some good footwork and crosses the ball in perfectly for Ahmedi to volley into the bottom corner from 12 yards. 0-1 to Albania. Oh dear. I can feel those daggers from Bechkoura again.

Fortunately the lead doesn’t last very long. When in doubt, this France squad mainly just pass it out to Sidibé on the wing and so they do in the 45th minute. The full back gets to the byline and shows fantastic vision to slide a pass back through the crowded area to find Bakayoko on the edge of the box, who toe pokes in the equaliser.

On the other side of the break, a Pogba free kick is swung into Albania’s box from the left wing, Samuel Umtiti jumps for the ball and is pushed by Taulant Xhaka. The referee points to the spot and up steps captain Pogba to become France’s all time top goalscorer. Pogba places the ball on the spot, counts his steps back carefully, runs up – And slides it straight down the middle as the keeper dives out of the way.

From there, Albanian heads drop all over the place and within 5 minutes we’re 3-1 up when Maupay holds the ball up 20 yards out and rolls it back for Bakayoko. The scorer of our first goal takes a touch to get it out of his feet and then loops a thunderous shot over the keeper and into the far top corner of the net. It’s a thing of beauty.

Tolisso and Lemar make sub appearances 20 minutes from time to rest Sidibé and Coman and then Pogba comes off with 5 minutes to go to get the individual ovation he deserves for his achievement. Yes he’s “only” scored a penalty, but you can’t argue with the numbers: 127 caps, 52 goals. Paul fucking Pogba. Lopez comes on again.

With 3 minutes of normal time to play, Ousmane Dembélé finds Tolisso bounding down the right on the overlap and the Monaco man swings a cross in towards the penalty spot. Who should meet it? Prolific striker Neal Maupay? World class winger Thomas Lemar? Bakayoko, the ball winner on a hat trick? Wrong, wrong and wrong. There on the penalty spot to leap and head the ball into the back of the net is Stade de Reims’ 5’6″ playmaker Maxime Lopez. Written off before he’d kicked a ball in the French jersey, Maxime’s now got a goal and an assist in a glittering 17 minute international career.

Vindication blanket once again snugly across my shoulders, I turn to Bechkoura and smile. After a second of reluctance, he laughs and shakes his head. “You lucky bastard.” 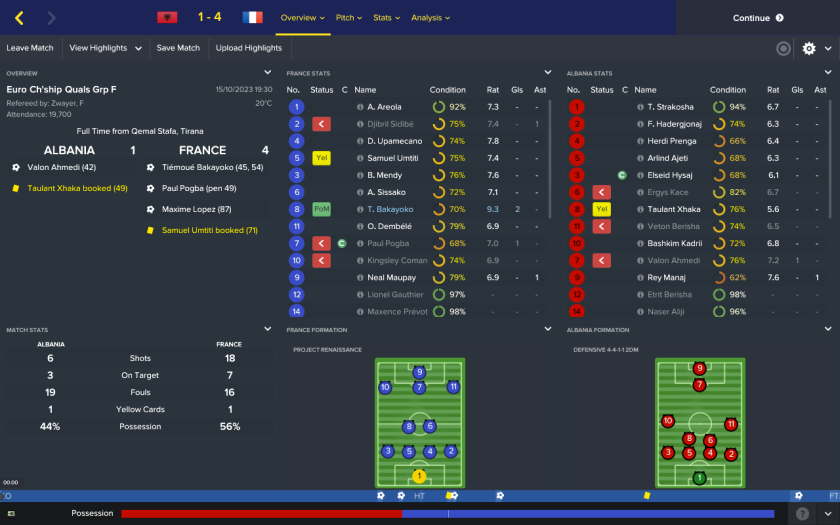