Get your slide whistles ready.

Latest short story – “Listen To This”

Scratch that – Even latest-er short story – “Steve Walked To Town”

If there’s one thing I didn’t expect to say in my career, it’s that I’ve just agreed to sign my 2nd player from Ivorian side Académie de Football Amadou Diallo. This sackful of syllables, you might remember, produced a certain gem named Joël Soumahoro and as I’m not bowled over by the goalkeeping options that our own academy has produced, I’ve arranged to take 17 year old Ivory Coast U20 international Ibrahima Gaye off their hands when his contract expires on the 2nd of January 2024.

He may not be a future world beater and I don’t think he’ll break into the side during my tenure at Auxerre, but Ibra definitely has potential. He’s 6’3″, has decent reach, handling, reflexes, is good at one-on-ones and is a brave, driven young chap. Plus as he’s currently on a whopping £4 a week, he jumps at the chance of coming to a big league on a comparatively massive salary. Initial compensation of £130k is agreed with the Ivorians, who I’d imagine either really love me or really don’t.

There’s more good news on the International front: Auxerre’s contingent played quite a bit over the international break and again, Sissako and McCarthy impressed, with McCarthy grabbing another goal for South Africa in their win over Mali.

Nathan Andre’s unhappy again though. He still wants more regular football, so now that Aidir’s officially up and running but is also running hot and cold, I agree to give Nathan more time up front, starting today when we take on Ligue 1’s bottom team Stade Brestois.

It probably won’t shock you to learn that I’d like another professional performance here today. Yes, they’re 20th, but all that does is make a little voice in my head scream “Look out for the banana skin!” over and over again like an extra in a poorly funded slapstick comedy film.

I’m making a couple of changes from our last game – Mathis Roux’s going to drop back out of the XI and is replaced by Abdoulaye Sissako, who’ll drop back and allow Lamine Fomba a go in the number 10 role. Nathan Andre’s in over Aidir as I attempt to keep him sweet and after his huge impact in the Lorient game, Alessandro Bassani will start over Phil Foden, who misses out on the starting XI for the first time this season. 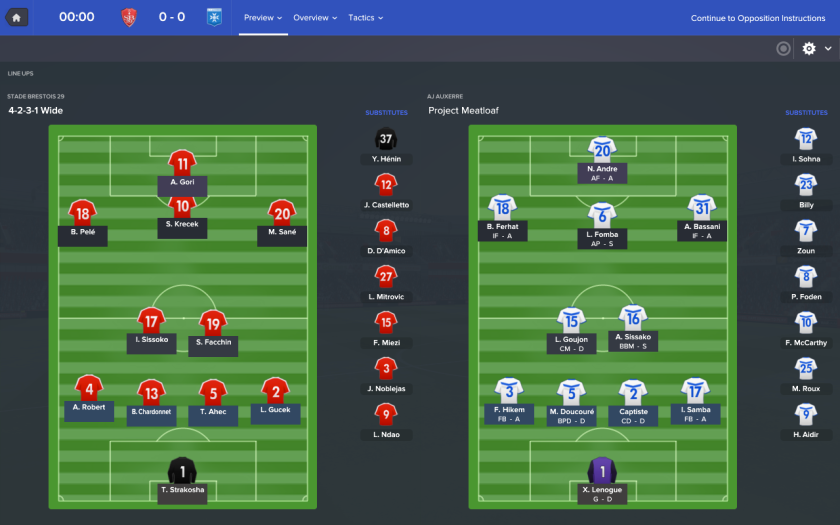 It’s a slow burner of a first half. Brahim Ferhat has a decent effort skim the outside of the post after half an hour, but the first really good chance falls to Stade Brestois when the brilliantly named Bryan Pelé sprints down the left wing, turns Samba and crosses to the far post. Sané’s completely unmarked on the right hand side of the area and chips the ball in for Gori, who should score but turns the ball against the post.

After a half time team talk that I treat with all the caution of a man trying to sneak closer to a baby deer that could get spooked and flee any second but is also armed with a fully automatic machine gun, we head back out for the second half. I think I’d actually take a draw in this one. We’ve not been great so far but I suppose neither have the hosts.

And hey presto, I’ve fucking jinxed us. 10 minutes after the restart, Bryan Pelé once again gets the better of Samba down the wing and this time whips in a cross to the near post. Gori, keen to miss another golden chance, heads the ball straight at Xavier Lenogue, but from only a yard or so away, our keeper can only flap his arms and parry it into the net. We have successfully stepped on the banana skin. Get your slide whistles ready.

A minute or so later it could be 2. Captiste’s caught on the ball uncharacteristically high up the field and Bryan Pelé takes full advantage, launching a ball into our extremely spacious defensive line. Krecek latches on, runs through and shoots, but Lenogue parries this one behind.

Disappointed, I bring Bassani off and replace him with Foden on the hour and then McCarthy comes on for Fomba 10 minutes later. With 5 minutes to go though we’ve still not shown any sort of quality in the final 3rd. Until we do. Sissako slides the ball onto the right wing for Samba, who whips it across the 6 yard box and Ferhat’s there at the far side to half volley in the equaliser. Slide whistles away.

With mere seconds left in the match though, we’re undone once more. Mitrovic plays a nice little pass through for D’Amico, who slots the ball calmly under Lenogue at his near post. Call Sideshow Mel. Order more slide whistles. For fucks sake. 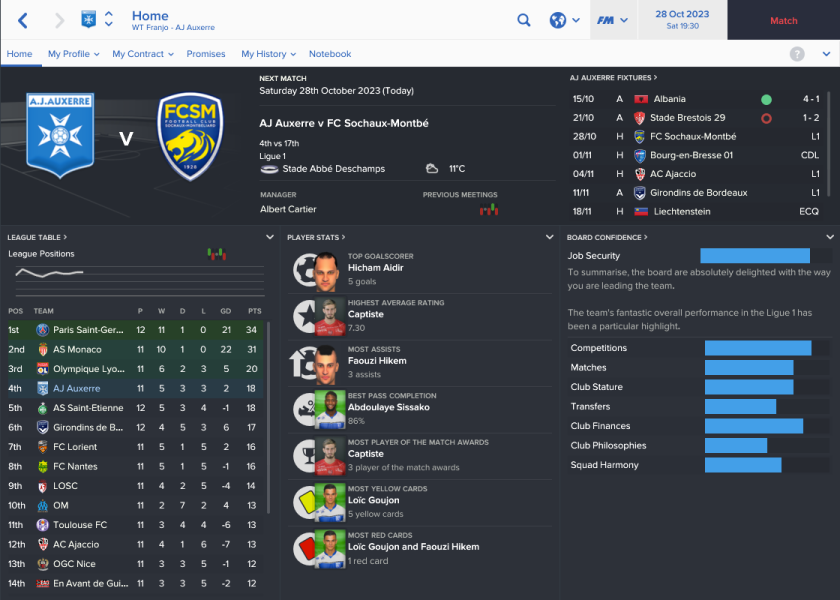 I’m not in the mood to dwell on that result whatsoever, so let’s move on rapidly. FC Sochaux-Montbé are next up and we go unchanged. They’re doing pretty shit and we’d better win. 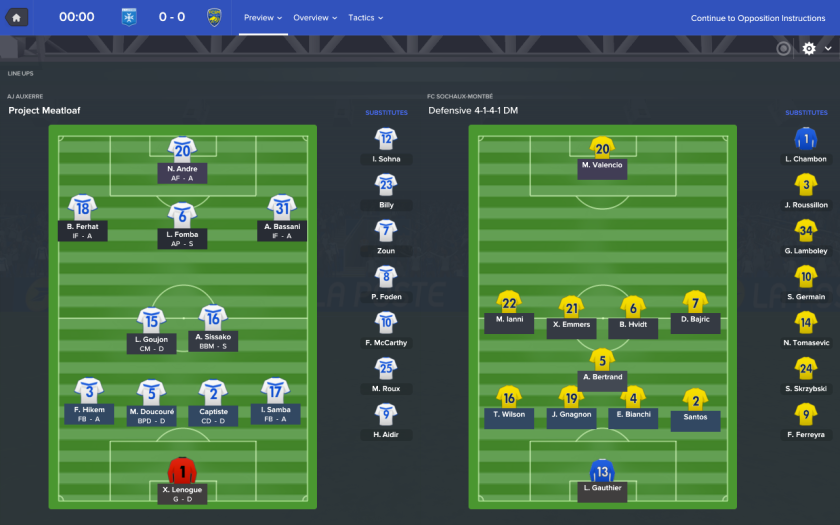 We do at least start brighter in this match. In the first 17 minutes, first Captiste has a chance after Hikem’s corner comes out to him and he forces a good save from Leo Gauthier with a half-volley, then as a result of some lovely one-touch football between Hikem, Bassani and Goujon on the left, we work the ball over to Sissako, who dribbles to the edge of the area and forces another good save from the young French international.

With half an hour gone, we do manage to beat Leo though. Sissako feeds the ball to Nathan Andre on the edge of the box, he turns his marker and curls a nice shot into the bottom corner. This is more like it. 1-0.

We take our narrow lead into half time but it’s taken from us within 8 minutes of the second period when Ianni sends a flat cross towards the near post, Lenogue comes out of his net to claim it but runs the wrong fucking way and Valencio heads into the open net at the near post.

After that it’s a lot of the same as what I saw against Stade Brestois: Decent ball retention, decent football, no quality in the final third. Ferhat does hit the bar with a cross on the hour, but I don’t think we can count that as an actual chance. On 65 minutes, Foden, Zoun and Aidir all come on for Bassani, Ferhat and Fomba, with Andre moving to the “behind the striker” role, but it doesn’t do much good.

But then, out of the clear blue Auxerre sky in the 90th minute, a hero emerges. With Sochaux penned back into their own defensive third to try and nullify us, Loïc Goujon passes the ball to Zoun, who’s 25 yards out in the centre of the pitch. Zoun turns, looks up, draws back that infuriatingly inconsistent right peg and lashes a superb shot into the far top corner.

We fall back and defend through injury time and come away with the 3 points, whereupon I breathe a huge sigh of relief. I suppose that makes up for conceding so late last match, so I’ll stop sulking now. To raise my mood even further, this win actually lifts us above Zlatan’s Lyon into 3rd place. He’ll bloody hate that. 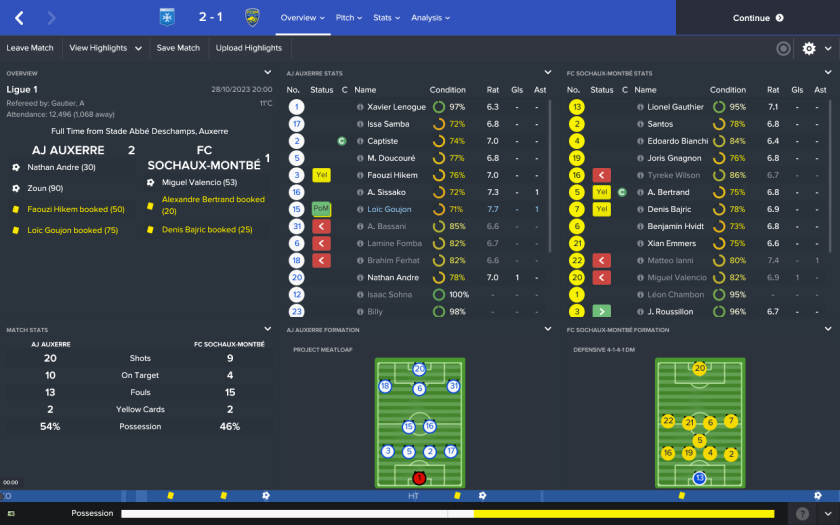