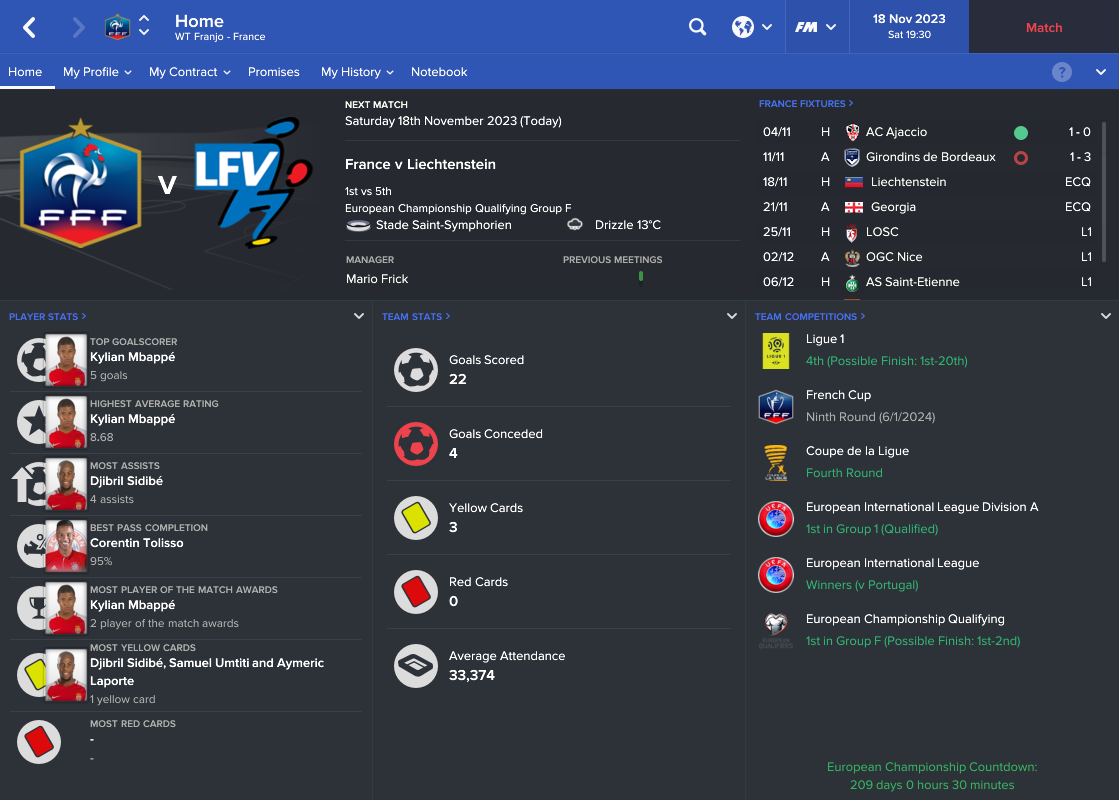 Really churning them out at the minute – “Blue Eyes”

“Maxime Lopez! He’s scored 1 and assisted 1 in 17 minutes! He should be the first name in this squad!”

“Look…” My assistant says, condescendingly putting a hand on my shoulder. “The French public love Lopez, he’s a revelation! You need to pick him for the squad.”

“I will sack you right now if you’re serious, you know that?”

Bechkoura grins. “You get very snappy around squad announcement days, Boss. Have you tried meditation? Or yoga?”

“Both in fact, yes.” I reply. He watches me expectantly, clearly waiting for elaboration. I sigh, before continuing: “A man with my attention span doesn’t react well to being told to do nothing but breathe.”

“Haven’t you got a desk you should be clearing out?”

“Not today!” He beams, before practically waltzing out of my office.

I always assumed that being the head coach of the French National team would be more… I don’t know… Serious.

Squad-wise for the Liechtenstein and Georgia matches, I’m bringing in a few more fresh faces, even though Lopez hasn’t quite made the cut for reasons I’ll come to a minute. In terms of my goalkeepers, Maxence Prévot is left out, which I feel a bit shit about, really. He still hasn’t made his International bow despite joining up with the squad twice. I don’t know though, there’s just something about him that doesn’t convince me. Plus, we have much younger and much more talented replacements ready to come in. Such as François Jarry. François hasn’t played much over the last few years for Espanyol, but at 20 years old he’s got a big move to Galatasaray and has been really impressive, so he could be in line for a debut.

I’m only making the one change in defence too and that’s to bring Theo Hernández back in for Benjamin Mendy. Now that Theo’s in the mix, we’ve got 3 top quality left backs to choose from and besides the fact that Theo’s 3 years younger than the other 2, he’s been playing far more regularly at club level than Mendy recently.

I’m making 3 changes in midfield: Lopez makes way, as do Abdoulaye Sissako and Lamine Fomba, none of whom have been overly impressive in recent weeks although they haven’t been awful. With Kylien Mbappé back to fitness, Antoine Griezmann back to form and Club Brugge’s uncapped, 26 year old ball winner Lucas Tousart putting in very consistent performances in Belgium, I want all 3 in the squad.

Although I’m not sure anymore who I want to play up front between Antoine Griezmann and Kylien Mbappé, I still wanted to keep the other 2 strikers in the squad for backup. Neal Maupay goes and gets injured just after I announce the squad though, so he’s replaced by Hervin Ongenda. 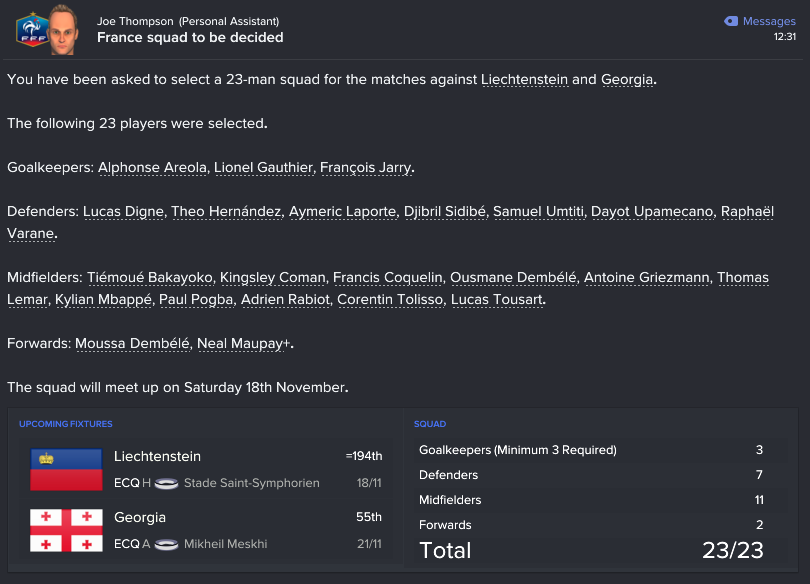 I station myself in the Stade l’Abbé-Deschamps car park before the match, making sure to shake hands with every player and staff member that steps off the Liechtenstein team bus. We are colossal favourites for this match but I want my former side to feel as welcome at the Stade Saint-Symphorien as we did at the Rheinpark. 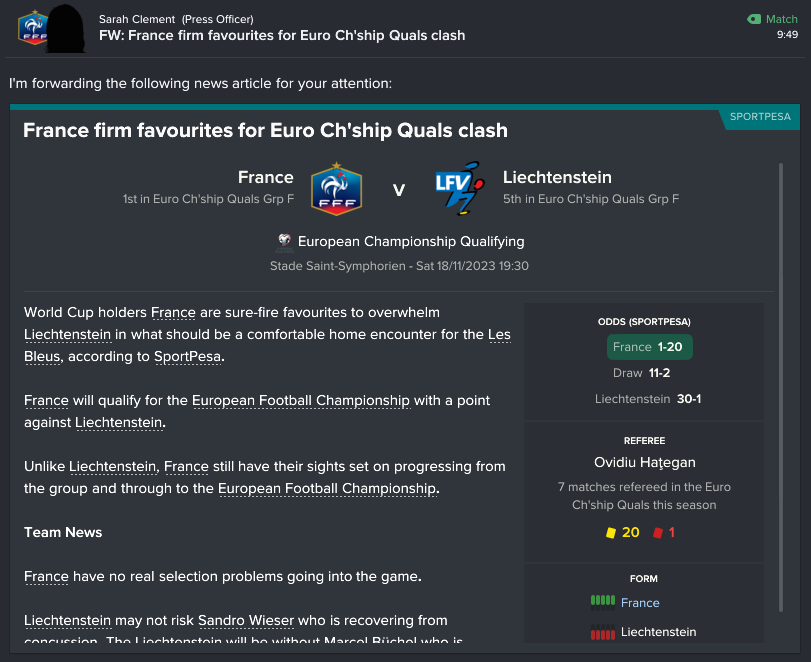 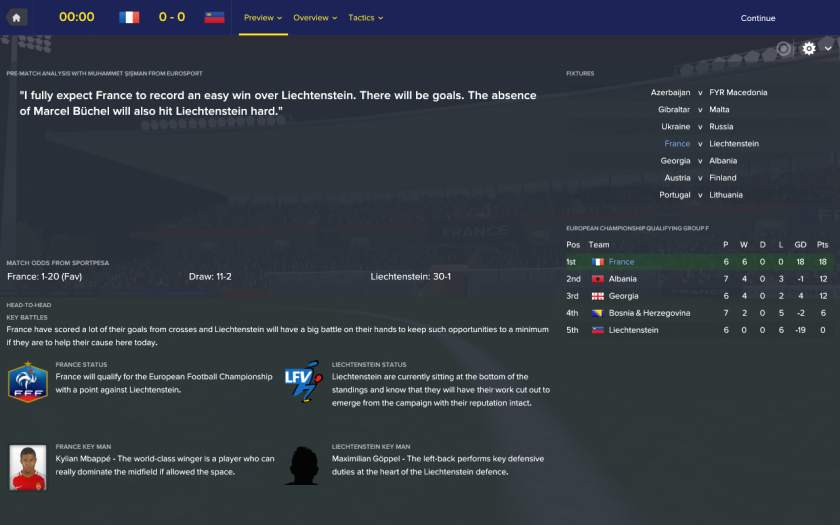 Against Liechtenstein’s 4-4-2, we’ll have Areola in net, Sidibé, Varane, Laporte and Theo across the back, Rabiot and Bakayoko in midfield, with Lemar, Pogba and Mbappé behind Griezmann. I do consider keeping Mbappé up front but to be fair, his place in the squad is absolutely nailed on, while I want to give Antoine every chance to impress me.

I give Mario Frick another sympathetic smile and he laughs and shrugs back once more. I don’t think either of us are surprised. 30 seconds in, Griezmann turns on the edge of the box and passes to Mbappé, who steps across Göppel and clips the ball into the top corner. Theo volleys in his first France goal before 5 minutes have passed too, after Mbappé flicks on Lemar’s corner for him.

On 20 minutes, it’s 3-0. Lemar smacks a 20 yard free kick against the bar, it bounces back and Mbappé’s the quickest on the scene to tap in the rebound. By the half hour, it’s 5. First Lemar’s corner is headed in by Pogba, then Rabiot passes the ball forward to Mbappé, who spins past Stauffiger and drills in from a narrow angle to complete his half hour hat trick. This is ruthless.

Over the next few minutes, 5 becomes 6 when Pogba flicks on Lemar’s free kick and Mbappé leathers it home on the half volley and then 6 becomes 7 when Lemar sprints down the left and drills a cross in for Griezmann to tuck away at the near post.

7-0 would be quite enough of a lead by half time, but my lads aren’t done just yet. Another charging run by Lemar down the left wing, a cross into the centre and a push by Stauffiger on Mbappé results in a penalty, which Kylien converts himself, firmly into the top left corner to complete a rare “glut” of goals. Moments later it could well be 9, but another Lemar run and another dangerous cross is met by Pogba, who heads the ball onto the roof of the net from 6 yards out.

At 8-0 the whistle is mercifully blown by the referee though and I honestly don’t know whether to head into the home changing rooms to praise my team or the away changing room to console theirs. I opt for the former and decide to actually make a double sub, with Jarry and Tousart given half a match to impress on their international debuts in place of Areola and Bakayoko.

What would you say if I told you that within the first 10 minutes of the second half, Liechtenstein pull the scores back to 8-8?

You’d be rather surprised, I imagine. Well that was a fun exercise, wasn’t it? Anyway, in the 52nd minute, Griezmann tees up Rabiot, who rifles the ball in from the edge of the area for 9-0. On the hour, a Sidibé cross is volleyed in off the bar by Antoine Griezmann to get us into double figures and then 10 minutes from the end, Mbappé gets an individual ovation as he’s replaced by Ousmane Dembélé.

In the 85th minute, Lemar spins away down the right wing and drills in yet another cross, which Lo Russo makes a mess of and can only tip against the post. The ball rolls across the line and Griezmann tries to get there to complete his hat trick, but he’s beaten to it by Marco Stauffiger, who is just not having a good day. Stauffiger skews his clearance and smacks the ball into the back of the net to make the final score an ungentlemanly 11-0. 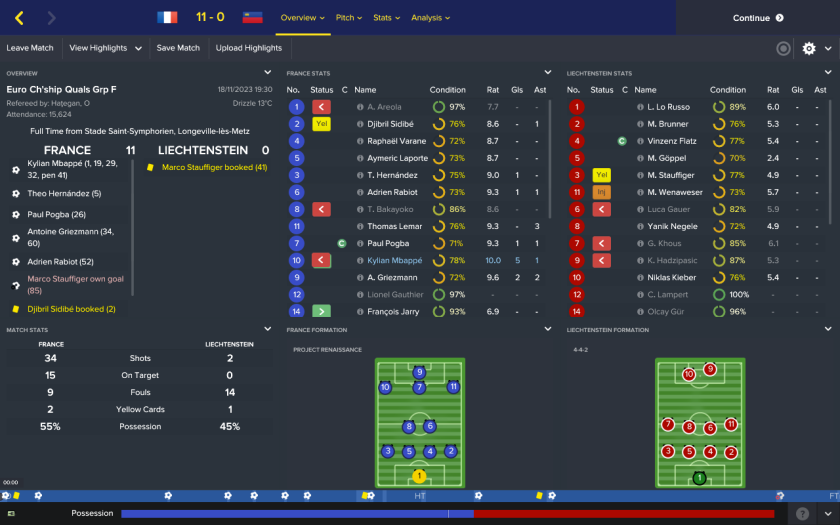 With that, we’ve mathematically qualified for Euro 2024, not that that was ever in much doubt. We’ve had a fairly easy group, but as the old saying goes: “You can only beat what’s in front of you. Mercilessly.”

That result also eclipses France’s record scoreline, which was set in the Euro 96 qualifiers over 28 years ago when we beat Azerbaijan 10-0. I say “we”, but I had very little to do with that result to be honest. I was focussing more on memorising the alphabet at the time. Either way, I’m so sorry, Liechtenstein. Still, at least I’ve finally written them into the history books.

The records continue to tumble though and surprise surprise it’s Kylien Mbappé that’s breaking them. He’s scored 13 goals for France this calendar year, which breaks the 11 that Paul Pogba scored in 2018. Pogba also had the record for the number of goals in a single game, a hat trick against Czech Republic, which Mbappé has just eclipsed with 5.

Let’s wrap up this qualifying campaign then by making it 8 wins out of 8, shall we? We make the trip to Georgia with the French team in an extremely good mood. It’s a dead rubber, as Georgia are safe 3 points above Albania, who have already played all 8 matches. Bosnia and Liechtenstein are… Not a threat to them with 6 and 0 points respectively. I’m mixing it up a bit for this one. Jarry and Tousart both make their full debuts and will get the full 90 minutes, along with Upamecano, Ongenda and Moussa Dembélé. Areola, Varane, Bakayoko, Pogba and Griezmann all drop out as they could all do with a bit of a rest before they return to their clubs. Kylien Mbappé takes the armband and leads his country out for the first time. 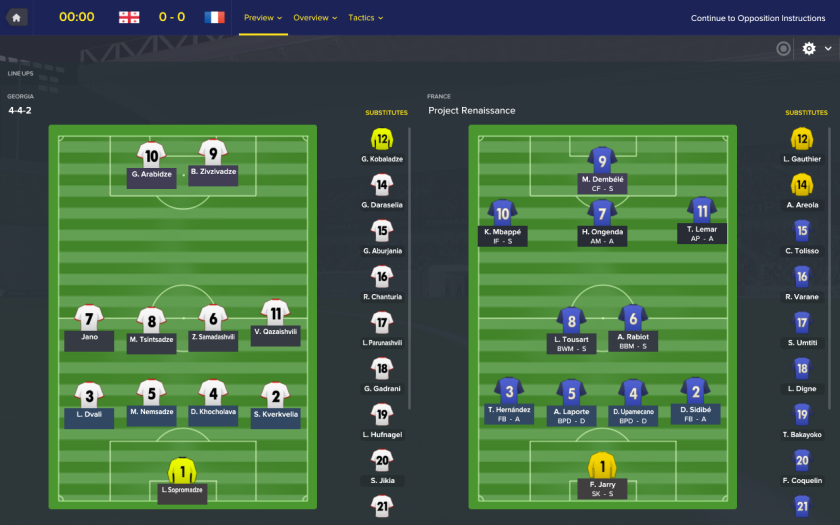 8 minutes in, I’m already getting quite pessimistic about Tousart’s prospects at this level. He picks up a booking for a professional foul, which is his 2nd yellow card in a 53 minute international career. I know my Auxerre lads get booked a lot but that seems a bit silly. Just afterwards though, Lemar picks out Sidibé making one of his ever so consistent overlapping runs. The full back whips the ball across goal and captain Mbappé taps it in. Wait, I can do something with this. A cappé Mbappé tappé? Mcappy tappy? I’ll work on it. A minute later, Lemar bends a 20 yard free kick into the top right to effectively wrap the game up before the 10 minute mark.

Just after the 20 minute mark, Lucas Tousart writes himself back into my good books. Dembélé’s cross is blocked and it bounces back to the perhaps overly aggressive midfielder, who half volleys it low and hard into the corner of the net. I’m a sucker for a well struck goal from outside the box. Before the half hour Theo’s long ball is flicked on by Ongenda’s heel for Dembélé, who plays it on first time for Mbappé. Of course he finds the far top corner for 4-0.

Georgia strike back with goals either side of half time and both are eerily similar: Tsintsadze plays a long ball over the top of our high line, Arabidze latches on, shrugs off his marker and fires low past Jarry. 4-2.

Tolisso replaces Rabiot on the hour and a few minutes later we score a 5th, when Ongenda lays the ball off for that man Mbappé, who smacks it over the goalkeeper and into the roof of the net from the edge of the box. We go close again not long after when our skipper plays the ball through for Dembélé, but he can only drag his shot just wide. Lemar’s low cross 5 minutes from time deflects back to the substitute Tolisso on the edge of the area and he lashes the ball into the net to complete our qualifying campaign in style. 6-2.

We’ve completed our qualifying campaign with 8 wins, 39 goals scored and 6 conceded. Of course, that is with the huge caveat that our group didn’t really contain a real threat to us, but still. Nice. 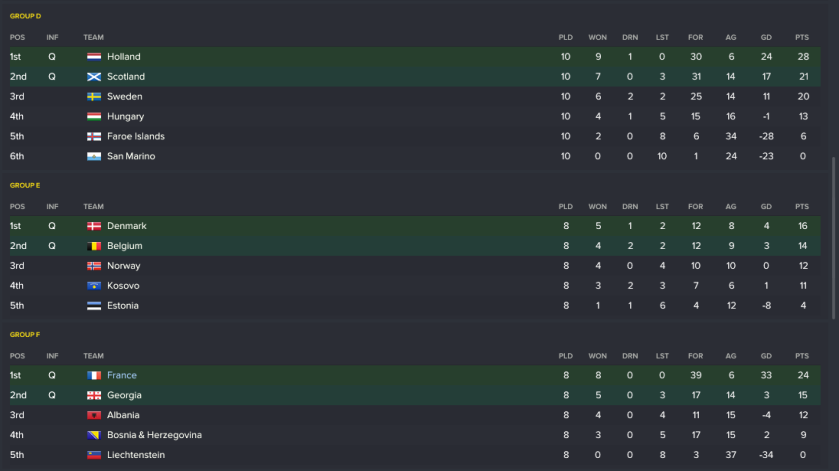 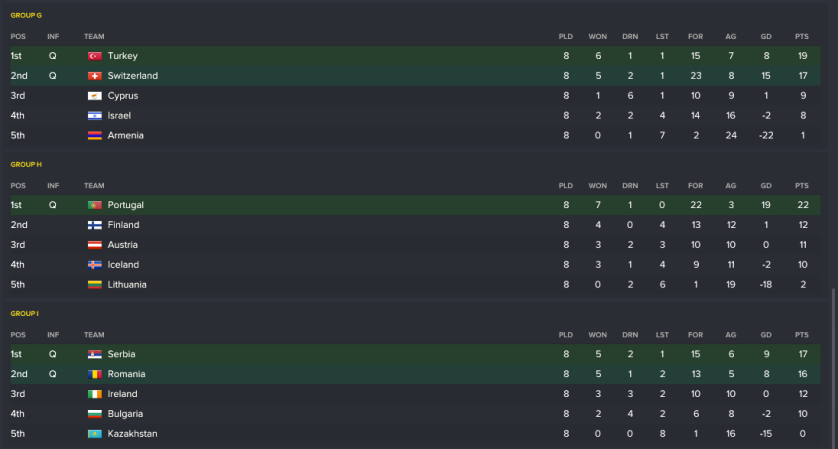