You want to bore us to death, Mellberg? Fine by me. Let’s all sit back and watch paint dry together. 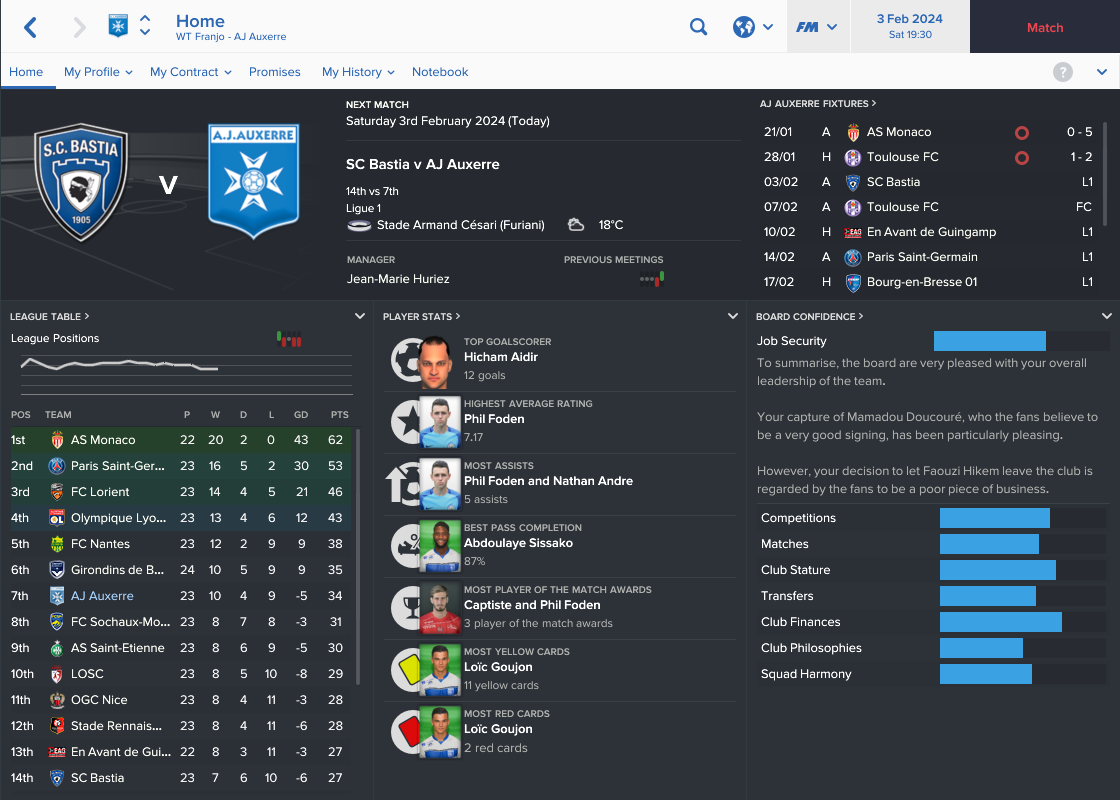 Good riddance to this transfer window, that’s what I say. It’s absolutely done my head in. We see a late flurry of bids come in for one player in particular – Manchester City and Anderlecht make 2 lowball bids each for young striker Sylvain Magnin. He could be an a good player for Auxerre in the future though so I reject their advances, after which Anderlecht turn their attention to Jordan Leroux. Still no. 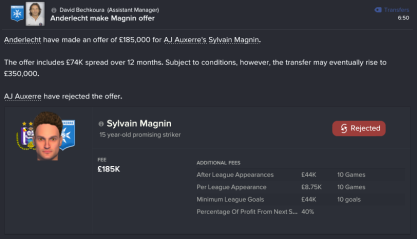 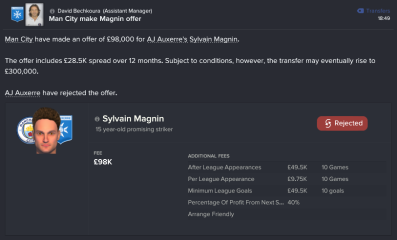 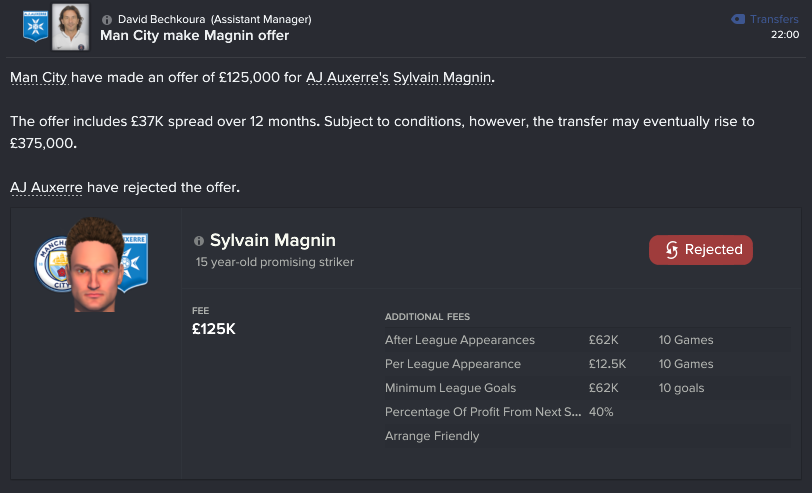 We also get a call from our good friends at Eupen, who have decided that they need a replacement for playmaker Joël Soumahoro and that the replacement should be… Our holding man Raf. I’m not sure I follow their logic, but I want to keep Raf around for numbers anyway. Sorry lads. 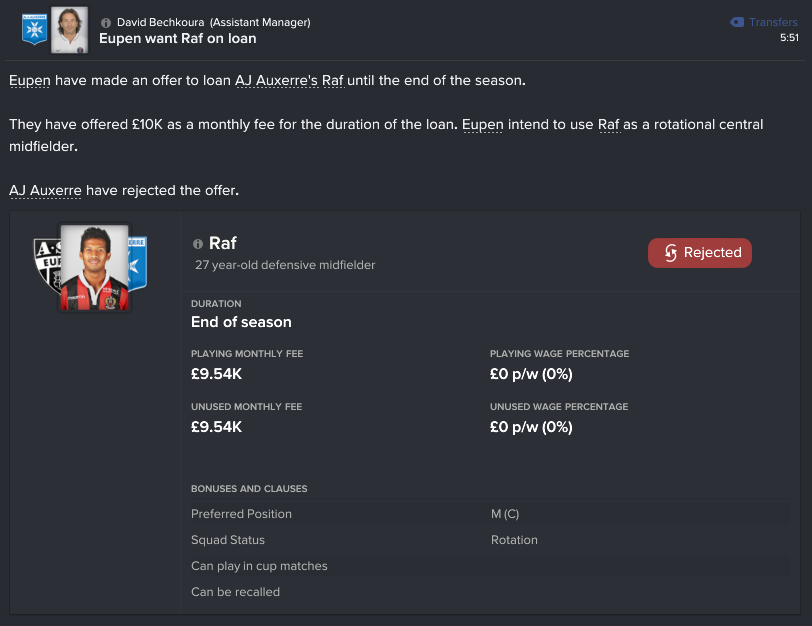 The good news on deadline day is that a permanent Summer transfer for our loanee left back Rogério is confirmed. The bad news is that it isn’t us that confirm it, but rather our Ligue 1 rivals Nantes. Well this is awkward. If he really, really impresses me in the next couple of games I’ll consider playing him over Billy for the remainder of the season, but otherwise I’ve now got no reason at all to give him any first team football. Bit annoying really.

Still, at least that’s the window out of the way so now we can get back to our abysmal start to league football in 2024. Today we travel to SC Bastia, who’ve been really quite impressive since their promotion, currently sitting in 14th place, just a stone’s throw from the top half and who we thumped 3-1 at the Stade Abbé-Deschamps.

The only change to our team from what was quite an unfortunate loss against Toulouse is Lamine Fomba, who comes in replacing the suspended Abi Sissako. I’m willing to look past Vladimir’s mistake for the second goal and give him another chance, but I’ll be watching Rogério like a hawk. He really does have to impress today.

To say that we get off to a flying start would be a slight overstatement, because within 3 minutes we’re 0-1 down. My God, are we suffering from the worst collective post-Christmas hangover in history or something? What is happening to this team?! Negre sprints down the right wing and maybe I’m biased by recent events but he’s chased by Loïc Goujon seemingly because Rogério can’t be arsed. He gets to the byline, chips a low cross in and Marcus Thuram smashes in the opener.

Thankfully we respond quickly and it pleases me to see that the move that leads to the equaliser starts when Rogério heads clear from a dangerous cross. Nathan Andre then releases Foden down the wing, who eventually cuts inside and tees up Ferhat on the edge of the box, who toe pokes the ball into the bottom corner. That’s better. I encourage the team to play on the counter as that particular counter attack was very pleasing.

Amine Reynier once again replaces Andre when we reach half time as I continue to slowly introduce him into Ligue 1 and within 10 minutes of the restart, we take the lead. Ferhat the goalscorer powers down the left wing before passing inside to Aidir, who has the choice of either the new boy Reynier or Phil Foden to slip in behind the defence as they both make excellent runs either side of him. He opts for the tried and tested latter and I’ve no complaints as Big Phil places the ball into the top corner from 12 yards.

I make another change after that to try and protect our lead: Basauri replaces Hicham Aidir and moves in front of our defence in a 4-1-2-3, while Reynier moves onto the left and Ferhat gets a crack at the lone striker role, where he’ll sit deep and collect the ball before making more of those surging runs. The change nearly pays off within minutes in an entirely unexpected way when Basauri smacks a free kick against the underside of the bar and then with 22 minutes to go, Ferhat also rattles the woodwork when his 20 yard curler comes back off the angle.

Of course, hitting the woodwork twice in quick succession while holding a single goal lead just screams “Danger” for me, so I’m pleased that we manage to hold onto the lead for the remainder of the match. After a shaky start, we’ve come away with a decent win. Rogério is impressive as is Phil Foden, but I always love to see Player of the Match Brahim Ferhat steal the show. 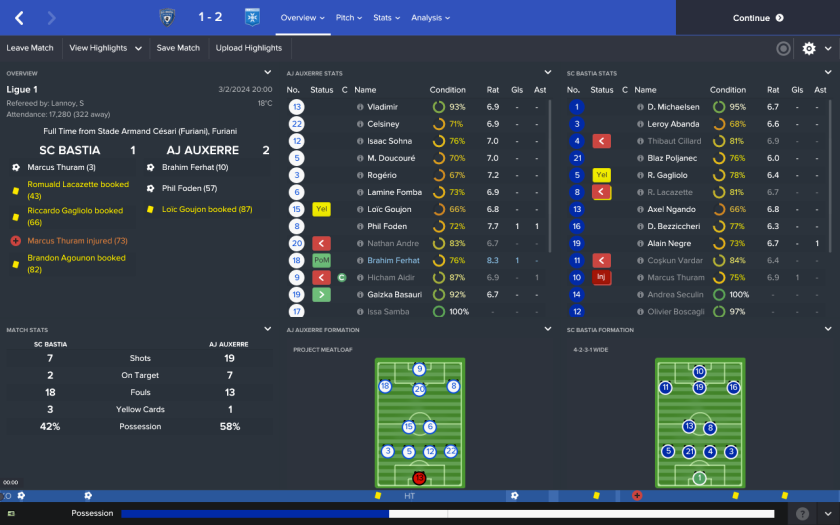 It’s easy at times to get caught up in the here and now of football. In the here and now, despite that win, we’ve slipped a bit in the league and that’s disappointing, but the fact that we’ve now equalled our points tally of 37 from last season with 14 matches left to play gives me some much needed perspective. We’ve done fucking excellently this year. One thing that isn’t happening in the here and now though is a relocation to Norfolk to follow in Mike Bassett’s footsteps by taking the Norwich job. No thanks.

After picking ourselves up from the loss against Toulouse and dusting ourselves off, what better way could there be to kick on than playing Toulouse again in the French Cup 10th round? Don’t worry, I’m not still annoyed about that loss. It happens and we were unlucky, so fine. Interestingly this is a repeat of last year’s Coupe de la Ligue Semi Final, when our clubs were both having dramatically different seasons. 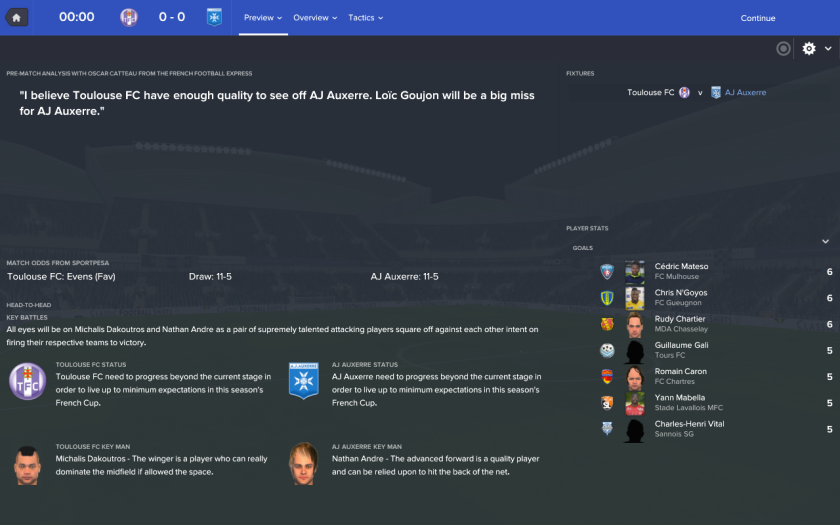 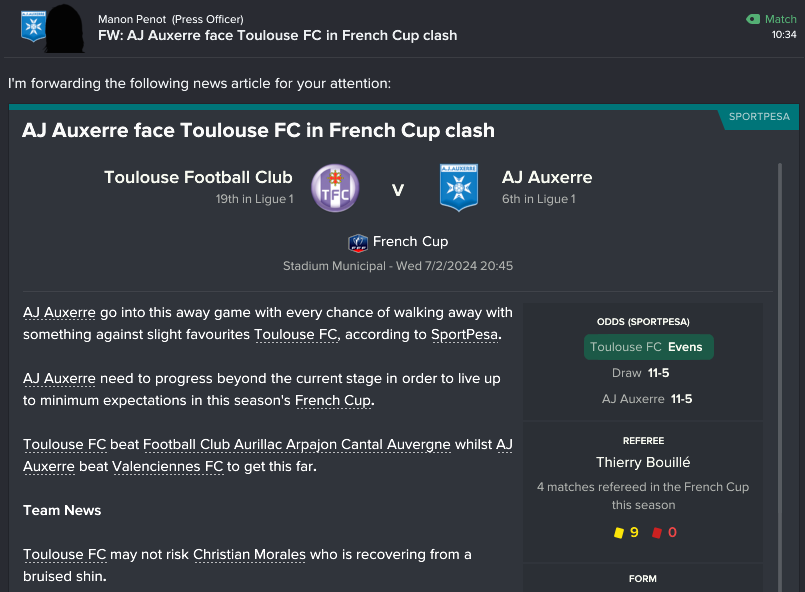 I’m making quite drastic changes, including the debut of a brand new system named after it’s purpose – Project: ToWin. As oppose to Toulouse, or ToLose. Clever, isn’t it? … Suit yourself. Project: ToWin is a defensive 4-4-2 that’s going to allow us to beat our hosts at their own game. You want to bore us to death, Mellberg? Fine by me. Let’s all sit back and watch paint dry together. A 0-0 draw and all those tired legs dragging themselves through 30 minutes of extra time could really kick your survival hopes squarely in the plums, but let’s do it.

Goujon’s suspended again of course and Nathan Andre’s dropped in the name of team shape, while Gaizka Basauri and Alessandro Bassani come in to replace them. Ferhat starts with Aidir up top and Xavier Lenogue is restored between the sticks as I’ve not been bowled over by Vlad. Hopefully our new approach should nullify the one-trick pony that is Toulouse from performing their one trick, which is to say it’ll stop them from soaking up pressure and then hitting us on the break with headache-inducing consistency and water-bottle-kick-inducing ruthlessness. Project: ToWin will make a mere pony of Mellberg’s purple cronies and force them to come out and play, after which we’ll win the ball with our energetic harrying and hit them on the break with our direct passes into space. They shall taste their own foul medicine and burn off all the tastebuds from their tongues with it’s bitterness, while I bask in the glorious and unquestionable glow of victory!

On second thoughts, I might still be a bit annoyed about that loss.

Well would you look at that. Half time and neither side has done a bloody thing. Not a bloody thing. Former Best Beard in Birmingham nominee Olof Mellberg is used to this situation of course, having dedicated his entire stint in France so far to working out how to prevent football from being played over the course of a match, but I’m uncomfortable. I feel dirty. I’m not above playing for the draw if you’re Höllviken or Katowice, but this isn’t us. Not Auxerre.

5 minutes into the second half, something does happen. Olof panics. He throws his usual plan out of the window as I watch on, grinning with near orgasmic levels of smug satisfaction and reaches shakily for a flat 4-3-3 system. Finally. Finally Toulouse are coming out to play. In the following few seconds I construct a reply in my mind. We’ll bring out Project: Sword to deal with the numbers they now have in the middle and we’ll get our fullbacks bombing up the wings. Sissako and McCarthy are both told to warm up, but are then quickly told to sit back down. Because something else happens.

Hicham Aidir picks the ball up 25 yards from goal and lays it off for young Basauri in midfield, who swings a beautiful pass onto the left for Bassani. The French-Italian winger’s left in acres of space after his marker makes the bizarre choice to follow Aidir into the box, but he then courageously doubles down on his mistake by allowing Bassani’s low cross to reach our Moroccan centre forward, who clips a shot into the corner. Beautiful. The pass from Basauri, the movement from Bassani, the shot from Hicham and the tears rolling down Olof Mellberg’s face and into that nest on his chin: The tears of a man who has blinked first and has paid the price. It’s all just so beautiful.

Alas, my elation doesn’t last too long. 15 minutes after the opening goal, Toulouse have gone completely the other way from their usual tactic of turtling me into an early boredom-related grave and are throwing the kitchen sink at us. One particular patient move around a packed Auxerre penalty area ends with Diallo slipping a pass through for Ivanovic, who has his ankles clipped by Mamadou Doucouré. My thought of “At least LeGod’s in net” proves fleeting as Ramírez steps up from 12 yards and buries his effort into the bottom right, just out of our keeper’s reach.

A few minutes down the line, the turnaround is complete. Again. Of fucking course. Diallo swings a deep corner to the far post, Ferhat forgets what marking is and Dumortier rises all on his own to head the ball straight at Lenogue, who flaps it into the net. I despair. Billy, Reynier and Andre all come on as I desperately roll the dice and we attack Toulouse for the last 20 minutes, but no. It’s over. They’ve done us again. 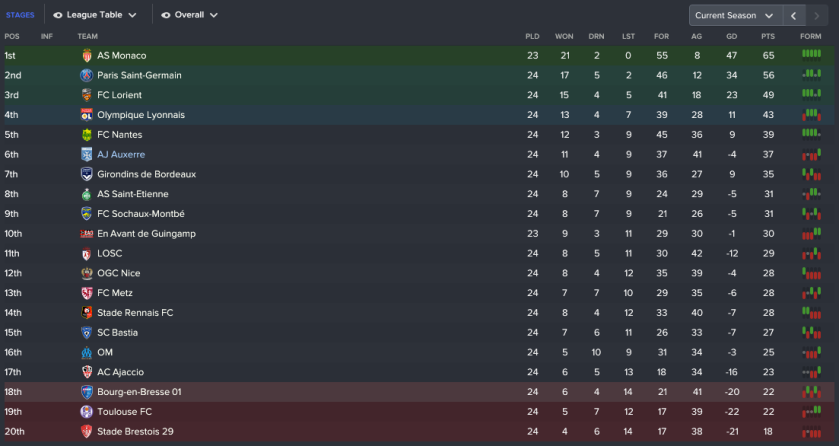 3 thoughts on “The Best Beard In Birmingham (Franjo: A Journeyman Story – Ep193)”