France are ready. The rest of Europe had better be ready too.

Side note: Right then, with your help I have figured out how we’re going to do this! Cheers for getting in touch. This week I’ll be releasing 5 episodes and they’re going to be mainly build up with the first match coming on Friday. After that we’ll be going back to 3 episodes per week and matches will be every other ep instead of just 1 a week. Hope you enjoy!

Brahim and Nathan’s faces are difficult to read. I wish they weren’t. I wish they’d be visibly upset or angry. I’m gutted for the pair of them, I really am. If I could take 25 players with me to Italy, they’d both make the squad, but I can’t. So they don’t. Unlike the other players that I’ve cut from the France squad, who just got faux-apologetic phone calls, I wanted to sit my Auxerre boys down and explain to them why they aren’t going. Ferhat isn’t going because his position for Auxerre this season has mainly been cutting in from the left wing and as luck would have it, I already have the best player in the World in that position at my disposal in Kylian Mbappé. If Kylian isn’t available, I’ve got Coman, I’ve got Lemar, I’ve got Griezmann. To choose Brahim over any of them would frankly be wrong and an emotional decision on my part.

Nathan Andre’s omission on the other hand was a much tougher decision. It was practically a coin flip. I’ve chosen Griezmann obviously, who is my first choice striker although Mbappé could take the role at some point. Behind them I’ve chosen Neal Maupay as he’s a proven goalscorer and has risen in my estimation more than most over the last 2 years thanks to his performances for both club and country. I’ve also chosen Moussa Dembélé, as he’s a different kind of player to the short, silky-skilled Griezmann, the rapid, almost-omni-skilled Mbappé and the right-place-at-the-right-time poacher Maupay. Dembélé can hold the ball up and bring others into play, which we may need at some point should the situation demand it. But the final forward spot was between Nathan Andre and Nabil Fekir. On one hand we’ve got a young lad from my Auxerre team who’s been in the form of his life over the last few months, but on the other we’ve got a seasoned pro who’s been scoring goals for Real Madrid, who’s adept at playing on either wing as well as up top and who I won’t be dropping in at the deep end in terms of his reintroduction to international football. It comes down to the fact that Fekir’s more versatile, playing at the highest level and has more experience, so Nathan misses out by a hair. After the duo leave my office, wishing me luck for the tournament ahead through forced smiles, I drop my head into my hands. Sorry, boys.

The other unlucky players to be trimmed away from the final squad are Yannick Clauss, Sebastien Corchia, Theo Hernández, Francis Coquelin and Ousmane Dembélé. If we were any other nation Clauss would probably be one of our core players at centre back, but we’re France and we just have too much quality at the back to give him a spot. He’ll be a nailed on starter in a couple of years. I think Corchia and I both knew that he wouldn’t be joining us in the final squad as his age is against him. Coquelin is out for the same reason. We have younger, better players in their positions. Hernández was a really tricky omission and a decision that I’ve been wrestling with for the last year, but he misses out purely because of how impressed I am with Lucas Digne and Benjamin Mendy. I think any of the 3 would do a job for us, but the pair I’ve selected are my preferred options. Ousmane Dembélé is left out for a similar reason to Ferhat, Andre, Hernández and Clauss: We’re just too strong in his position.

But that’s enough about who’s out. Let’s remind ourselves of who’s in:

Our number 1. He’s impressed me when he’s played for France and he’s had a very impressive season for Sochaux. He’s earned this.

Alphonse has had a fair season for Swansea in the Premier League. He’s consistently put in good performances in South Wales, although he has conceded quite a lot of goals. Mind you, he’s a good keeper but he’s not a miracle worker.

Alban could argue that his performances for Stoke this season should push him above Areola in the pecking order. It’s a decent point to be fair. He’s conceded far fewer goals per game although he is playing for a better club. I hope that I’m not given reason to drop Leo but if I am, he’ll certainly be considered.

Djibril might be my favourite player in the France team, excluding the Auxerre lads of course. He’s consistently excellent at right back and a no brainer to be in my starting XI.

After much deliberation it’s Digne who’ll take us into the Euros as our starting left back. I’ve never had reason to complain about his performances for France and he’s had a great season at City. If we reach the Semi-Finals and he plays every match, Lucas will reach 100 caps.

Chelsea skipper and arguably best centre back in the world, Aymeric is another no brainer. He’s in my starting XI. 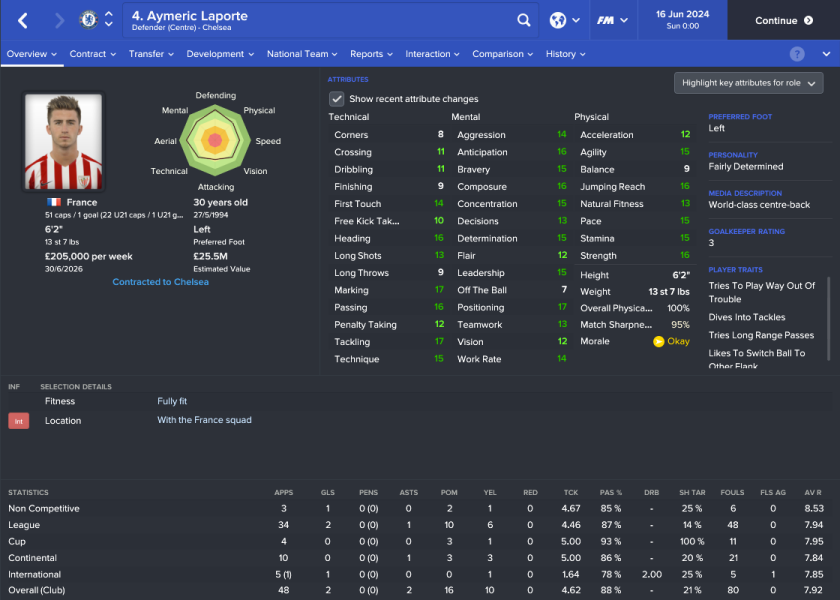 Another contender for best centre back in the world and another absolute certainty for the starting XI. Like Digne, Raphaël can potentially reach 100 caps during the tournament.

Corentin isn’t one of the players I have earmarked for a starting place against England, but he’ll definitely get plenty of game time. He’s a great player to have and can play in a few different positions. Never lets us down.

The most hated man in the Hernández household. Mendy’s had a very good season in Madrid and will no doubt put in a performance if called upon.

I’ll say the same about Samuel as I did about Clauss: If we were any other nation he’d be a nailed on starter. Unfortunately he’s just one of many world-class French centre backs and will be acting as back up for Varane and Laporte.

No doubt a starter in a few years when our other 3 centre backs most likely start to decline. Still an excellent option to have for the time being.

Surprised the shit out of me when I took over the French national team by being my finest ball winning midfielder. Excellent all over the pitch, including a much appreciated penchant for scoring wonder goals. Nailed on starter. 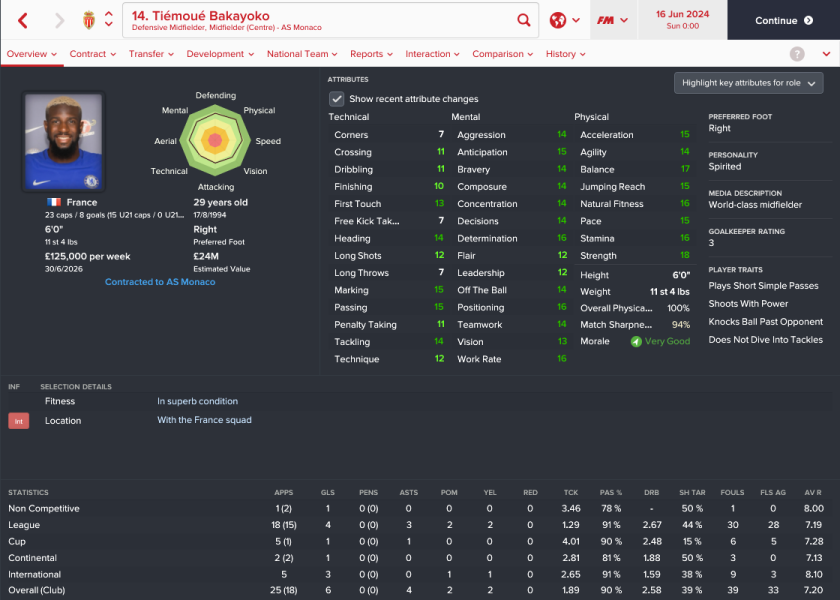 The other half of my preferred central midfield duo along with his Monaco team mate Bakayoko. Almost as impressive but with a bit more creativity thrown in too.

The man that our whole system was built around. I had the same headache initially as I’m sure many of Paul’s managers have had: “Where do I play him? He’s good everywhere”. I tried him out as a destroyer/second striker and he took to it like a duck to water. If Pogba has a good tournament, so will we. 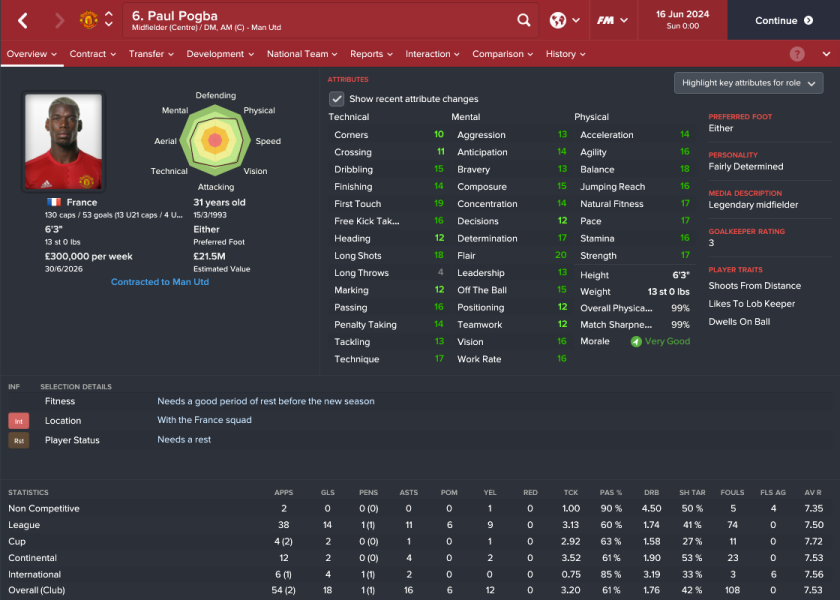 Initially I baulked when Man City paid £105M to Monaco in exchange for Thomas, but I get it now. He’s an unstoppable creative force whether charging up the wing, cutting inside, shooting, dribbling or passing. He’s also excellent from dead ball situations. A perhaps understated driving force of this France team.

I’ve said all I possibly can about Abi. It really says all that needs to be said about his character that in the face of adversity and criticism from the media before his international debut, he came off the bench and slammed in a goal from 25 yards. Has refused to stop impressing me for the last 3 years. 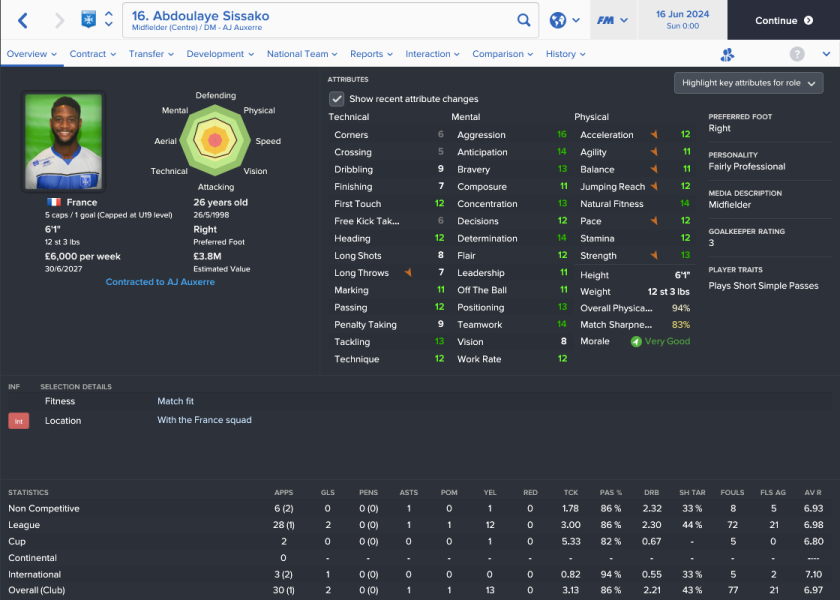 Remember when I nearly let Fomba’s contract run out a few weeks into my Auxerre tenure? He’d had a shocking season as we flailed about in Ligue 2 but he’s come on leaps and bounds since then and has now established himself firmly as a Ligue 1 central midfielder. Yet to impress for France as much as Sissako has, but to his credit I am flabbergasted that a player I nearly kicked out 3 years ago is now in my squad for the Euros as backup for Paul Pogba. He’s earned it. Good lad, Lamine. 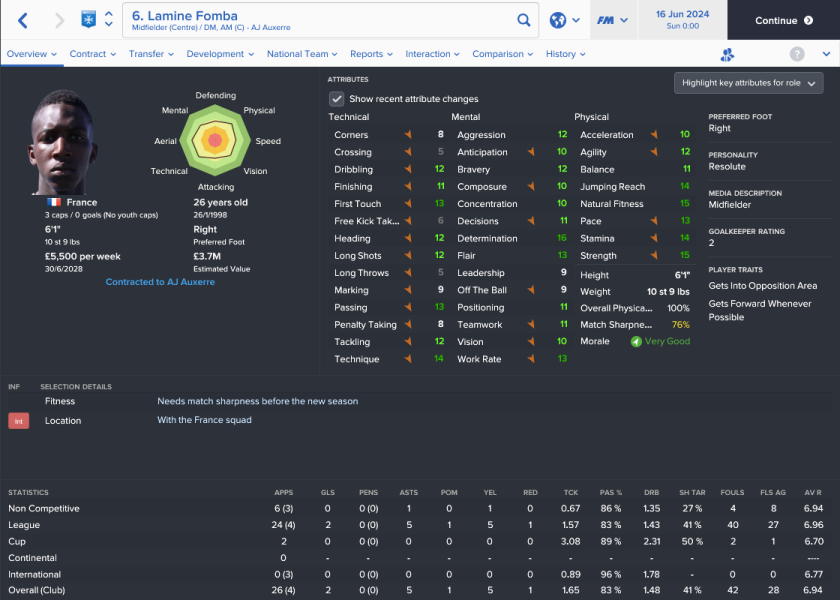 An excellent player and an excellent creative outlet, although he has hit the woodwork more than any other player I’ve encountered in my career. Kingsley will either be in or extremely close to the starting XI as per usual.

I considered ending Antoine’s international career earlier this season amidst poor performances for Atléti, but he responded in a ridiculous manner by having an outstanding season for his club and for me. Deserves to still have a place in the starting XI.

The best footballer in the World. Enough said, really.

As I’ve mentioned, Neal was always a dead cert in the final squad thanks to 2 extremely impressive seasons for Lorient. I’ll have no worries throwing him into the team to bag us a couple of goals.

Nabil had better have a good tournament, because I feel fucking awful about dropping Nathan Andre. That said, he won’t be a starter but he will play a part and I’ll be expecting him to continue his good La Liga form when he does. 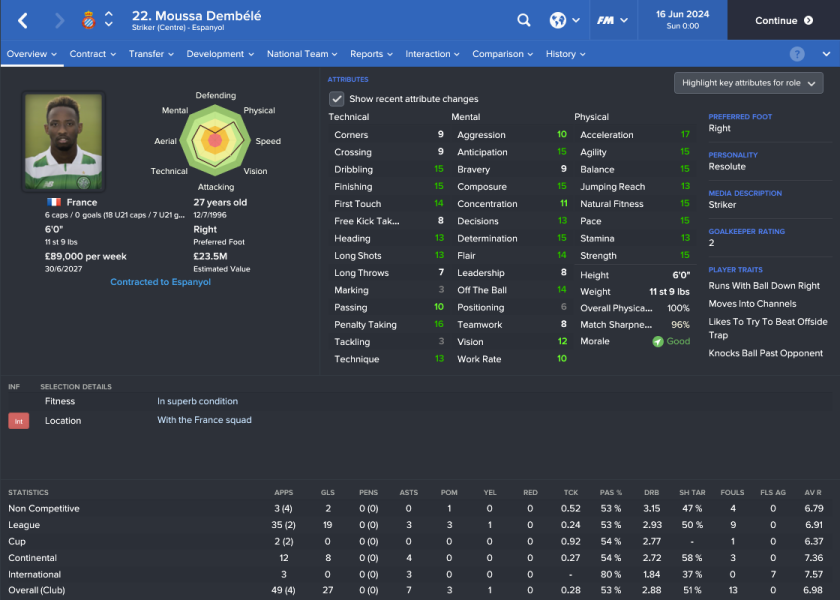 So that’s our squad for Euro 2024. France are ready. The rest of Europe had better be ready too. 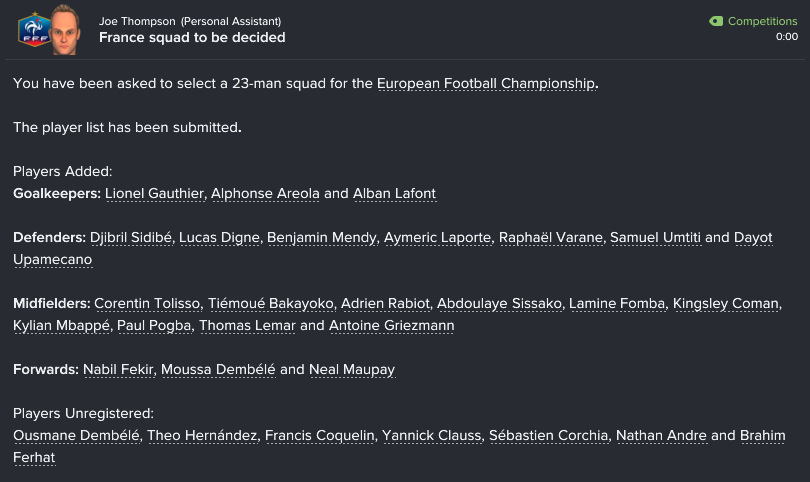 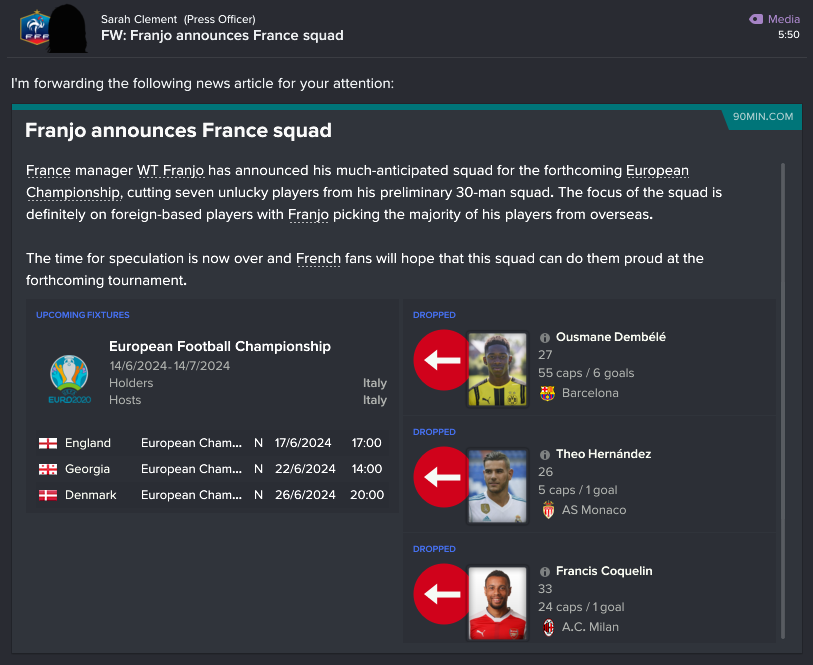