I have faith in my thrown together system to get the best of Monaco.

Enrique smiles a thin smile as we walk to meet each other on the touchline of Antananarivo’s Stade Municipal de Mahamasina pitch, deep in the heart of Madagascar. We shake hands and he pulls me into what seems like a mock-friendly hug. “You’ve left the French National Team in good shape I see.” He mutters, his voice thick with sarcasm.

“As long as they’re not losing 6-2 at the World Cup mate, I’ll be happy.” I pull away from the hug and give Enrique a wide grin, savouring the look of disdain on the former Spain manager’s face.

As simple as it is, I have faith in my thrown together system to get the best of Monaco in my first match in charge of Paris Saint-Germain. I’ve had a little bit of time since my arrival to watch footage from Enrique’s friendly matches and he’s been setting up to dominate in a 4-1-2-3. We’ll try to dominate too in our 4-2-3-1. We’ll do our best to retain possession, we’ll press high up the pitch to win the ball back as fast as possible and we’ll use our many skilled dribblers to run at Monaco’s defence and create space.

The good news for us is that our rivals are without Kylian Mbappé and Corentin Tolisso, whose strengths I know all too well at this point. The bad news is that Tiémoué Bakayoko starts in the heart of their midfield and I’m a big fan of the ball winning midfielder. I actually very much wish that I could have him in my team so that I didn’t have to play Marquinhos in the ball winning role. Also Theo Hernández starts at left back and I suspect he’ll want to prove to me that he should’ve been in France’s Euro 24 squad.

The first chance of the match goes Monaco’s way when 15 minutes in, Euro 24 winner Bernardo Silva’s corner is cleared by Ricardo Ibarra. Fabinho brings the ball down and plays it back out for Silva, who beats Dobby for pace and whips a cross towards the near post. Vinícius Júnior arrives with the goal at his mercy but thankfully glances a header straight at Donnarumma, who parries it clear.

A couple of minutes later they come at us again when Marquinhos is caught out of position pressing Giménez on the half way line. Silva cuts in from the left to make full use of the space that our makeshift midfielder leaves, chips a ball into the path of Júnior in the box and the striker shoots just wide of Donnarumma’s near post. I drop us back a bit to play on the counter attack, but just after the half hour mark Monaco get the breakthrough they deserve when another Bernardo Silva corner is missed by Coman at the near post and fizzes straight onto the foot of Giménez inside the 6 yard box, allowing the centre back to volley in the opening goal.

We go in for the break trailing by a single goal to nil, which isn’t ideal, but our attacking play is the most worrying thing to come out of that half for me. We’ve not been able to get the ball into the final third nearly enough, so I decide to bring Cvitanovic back into a deeper central midfield position so that he can pick the ball up and drive us forward. We’ll go more attacking after the break and we’ll play with a bit of fluidity, which should help us express ourselves and impose ourselves upon Monaco.

We do show signs of improvement just after the restart when Cvitanovic gets on the ball, takes on Bakayoko and slides the ball to Morata. The striker’s instantly crowded out though and Monaco counter. Silva again is the danger man, dribbling through the centre but then spooning his 20 yard shot well over the bar. With an hour gone I experiment a bit more, bringing on Philippe Coutinho and Moise Kean for Coman and Orlando, who’ve been ineffective as wingers today. We’ll change to a narrow 4-3-1-2 system with experienced playmaker Coutinho acting as an enganche behind a striking partnership of Morata and Kean. I’m hoping that having Coutinho stay in that central area will enable us to overload Monaco through the centre while our fullbacks now overlap to provide the width. I’m also unimpressed with Morata’s hold up play so far as a lone striker, so maybe having Kean supporting him will help us create chances. We’ll pass the ball shorter and we’ll exploit the centre. 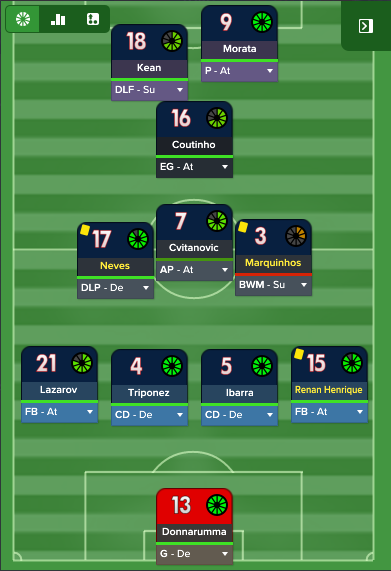 10 minutes later, green shoots of promise are emerging when Dobby finds Kean drifting out on the left wing. Kean drops the shoulder and cuts inside, spraying a fantastic pass out onto the right for Renan. This is more like it. Renan speeds down the line, gets a cross in… But it’s blocked and Monaco counter attack. Bloody hell. Bernardo latches onto a hoofed ball on the now vacant left wing, charges inside past Ibarra, gets into the box and shoots, forcing a great flying save from Donnarumma. From the resulting corner, Silva crosses to the far post and Giménez sends a looping header goalwards, but it’s a comfortable catch for Italy’s number 1.

7 minutes from time, we put together by far the best move I’ve seen all match, so I want to describe it in full. André Gomes sidles forwards towards the halfway line but is dispossessed by a superb sliding tackle from Marquinhos. Ibarra picks up the loose ball and chips it out onto the right wing for Renan, who uses his quick feet to leave Theo Hernández utterly bamboozled before playing the ball back inside for Cvitanovic. We then play some nice one touch stuff, with Cvitanovic passing to Coutinho, who moves it on to Kean on the edge of the area, who pings it first time back out onto the right for Renan. Renan volleys a cross to the far post, Dobby arrives to meet it, besting Leonardo in the air, but his header comes back off the post. Morata also has a chance a minute later, forcing a near post save from Rico after an impressive solo run, but we don’t manage to find an equaliser.

So the scoreline on the electronic board inside the Stade Municipal de Mahamasina reads Monaco 1 – 0 PSG, mirroring the scoreline between myself and Enrique. He’s won the battle of Madagascar and he’s won his first silverware as Monaco boss, but if I’m honest, I’m not too disheartened. This is not my Paris Saint-Germain. Not yet. This is a group of strangers who I’m experimenting with to see what works. Our time will come and the next time I meet Luis, I hope that we’ll be ready to put the record straight. The Trophée des Champions was merely the first battle in a year-long war. The Ligue 1 title is what I’m gunning for. That, as a wise man once said, is the real quiz. And we’re going to win.

One thought on “The Battle Of Madagascar (Franjo: A Journeyman Story – Ep202)”